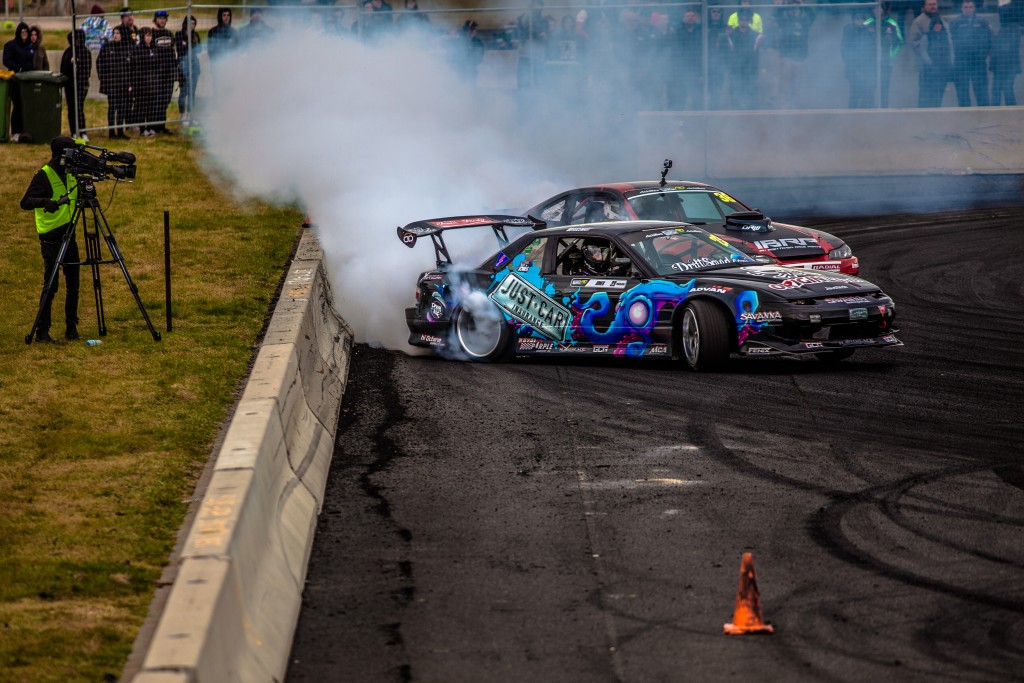 Round 1 of the Just Car Insurance Australian Drifting Grand Prix was set to be a big one. Sure enough the Team was put on the edge for the entire weekend, with many ups and downs along the way. Before the Team even set off for the road trip to Victoria they had a huge one and a half weeks of work on the car. Many sleepless nights and tons of coffee got the job done though.The Saturday started with a full day of practice. Heading out in the freshly tuned 400RWKW, the Just Cars Sonvia was set to make the ADVAN tyres diminish within a couple laps. However electrical problems started our day which lead into a string of issues we couldn’t resolve in a short period. By the end of the day and changing every single spare part we had, the Sonvia just didn’t want to play the game.Making a few quick phone calls lead to the Team being able to trailer the car down to Garage Worx where long time friend Khudar Elhaouli let us use his Dyno. Anthony from Jaustech came down to run the car up and check over the entire tune to find exactly what the issues where. It wasn’t long until we realised the issues kept growing. The boys at Garage Worx were kind enough to let us use parts and their tools to help fix everything. It wasnt long until the Team had the Sonvia firing on all cylinders and ready to rock for Sunday’s Main event. 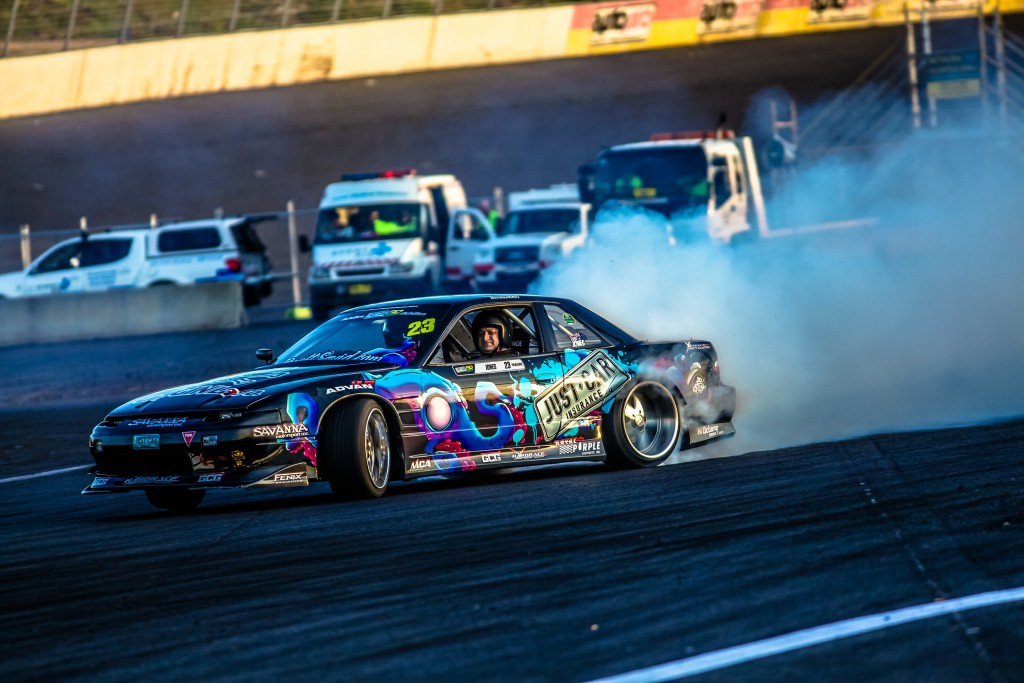 Huge thanks to Anthony from Jautech and also Khudar from Garage Worx for putting in so much effort to get our team back on track. Even having enough time to get back to the hotel to get a decent sleep before the big day.Sunday was Game day and it was even more stressful for the Team due to only having 30 mins in the morning for practice. This allowed the Team to try and make sure the car setup was perfect. With so many cars in the ADGP field now being close to 1000HP it was going to be hard to stay in with a fighting chance.The Teams practice session still proved to show some issues with the car. It was now coming down to a problem outside of our control. Pushing on was the only option and do the very best the Team could do. The Sonvia still had great grip and speed so there was no reason the Team couldn’t take the top spot.First up was qualifying and after two very average runs the Team didnt qualify anywhere near what we were aiming for. Qualifying in 22nd was a real bummer but at the end of the day the battles are where it all matters.Battles were up next and the Team had the Achillies V8 twin supercharged FT86 up first. Watching this car on the Saturday and looking at the shear speed he was getting made the Team change a few settings on the alignment to gain some grip. The Team knew they had to push as hard as possible to even stay close to the crazy FT86. Sure enough it worked and the Team progressed through to the Top 16. 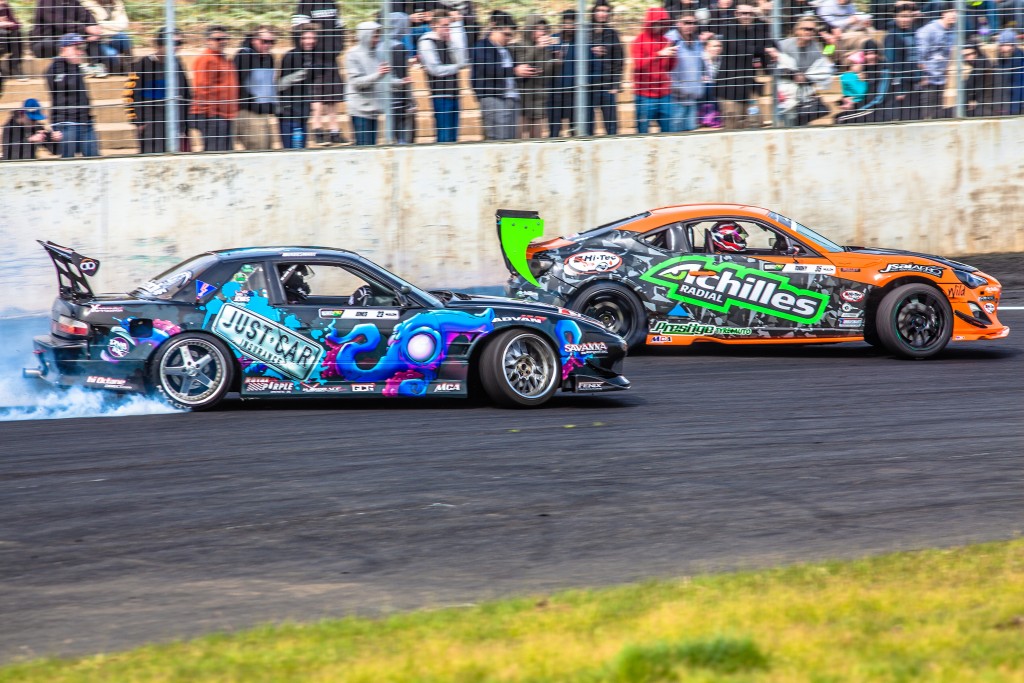 After the weekend the Team had already had, we were already winners just making it to the Top 16. It was a great feeling and they knew that making it all the way was not unreachable.Next up was the V8 powered JPP S13 from Queensland which was a very consistent car all weekend. This battle was a clean cut win for the Team and then it was time to get ready for Top 8 Battles. You could well imagine how happy the Team was about this.Next up was the crazy Sprint car powered GT radial S15. This beast was a force to be reckoned with and if the Team could stick it with this car they knew that the Sonvia was going to be good enough to take the day out. The first run would see the Sonvia leading and it was one of the closest runs of the day. Literally on the S15’s door the entire way around the circuit. All the Team needed to do now was to lock in a solid lead lap. But even with a solid lead lap the decision by the judges could not be made so a re-run was called. Now having to re-run the battle in order to find out who will progress into the Final 4. It was once again another similar battle with both drivers on each others doors, this time how ever the judges awarded the win to the GT Radial S15. It was a bummer but the Team was over the moon to be even able to get into the Top 8 after the drama filled Saturday.The Team have already begun the strip down stage and rebuild on the Sonvia. The car is going to undertake a heap of fresh parts to make sure this scenario can hopefully never happen again. Electircal issues are the worst and we need to make sure they’re sorted well and truly.I want to say a Huge thanks to my new Major sponsor JUST CAR INSURANCE, without their support this season wouldn’t be possible.GarageWorx and Jautech for making sure they did everything in their power to get the Sonvia running for the Main event.Of course my partners,Advan AustraliaYokohama AustraliaRoyal Purple AustraliaHard-Race AustraliaMCA SuspensionGCG TurbosHaltech ECUHI Octane RacingFuture Image trainingTurbosmartOriginLaboSavanna motorsportXtreme Clutch (ACS)Fenix RadiatorsDoseinkAnd last but not least, my awesome crew Lee and Jesse for busting out massive hours on the car.We are looking forward to Round 2 at Adelaide International raceway like you wouldn’t believe. How ever we will be attending the final Round of G1 Drift at Mallala on the Saturday 27th November. Then the ADGP Round 2 will be 28th November, this is going to be a massive weekend but the Team has already committed and we will make sure we are at both events.

« Brazil to host first ever King of SudAmerica event in 2016
Formula DRIFT World Championship: Canada Round Results; Fredric Aasbo at Top of the Podium in Canada »