So far through the 2016 we’ve competed in four Formula Drift Pro Championship events (and the Super Drift event at the Grand Prix of Long Beach), driven our truck and trailer about 3500 miles, and burned up about 200 GT-Radial Champiro SX2 tires. Now we are headed across the border for Formula Drift’s Pro Championship event at the Autodrome Saint-Eustache near Montreal, Canada.Since we are at the halfway point in our season, we thought now would be a good time to take a look back on the first four events since we debuted our GT-Radial / Mazdatrix MazdaMX-5 in April at Long Beach.Round One – Streets of Long BeachI’ve always said that Long Beach is my favorite event of the year. It’s my hometown, it’s always exciting to start the year, and we were competing in the GT-Radial / Mazdatrix Mazda MX-5 for the very first time. We actually kicked off the week with a visit to theUniversal Technical Institute campus in Long Beach, and we really enjoy meeting the students and letting them have a look at our cars. The UTI students are eager to hear about the more technical aspects of the car and how it performs on the American Ethanol / Igniteracing fuel and how our turner accesses data remotely from our Haltech ECU system. Once we were at the track, we had a lot of people very excited for our new car. The extreme look and stance of the car attracted a lot of attention from enthusiasts around the world. The car survived a wet and wild event and I went on to take 5th place in the Super Drift Challenge the following weekend at Long Beach.

Round Two – Road AtlantaOur first event at Long Beach and all of our testing beforehand was on short, technical courses so Road Atlanta was the first chance we got to really stretch the legs of our MX-5 on a high-speed track. We were one of the fastest cars in the speed trap. I qualified pretty decently but with the high speed and super-high wheel speed we were starting to run into problems with smoke getting trapped in the cockpit – strange but true with a convertible — and suffered during my tandem with Tanner Foust as a result. Georgia is definitely one of the highlights on the Formula Drift schedule – the fans are crazy!

Round Three – Orlando SpeedworldMan, was the MX-5 good right off of the trailer. The car felt better after one lap of practice than the RX-8 ever did. It was the first time in a couple of years that I thought I had a car that we could win with – it was a great feeling and I was really looking forward to tandem. We got the win against Charles Ng – and then in the top-16, we somehow lost against Fredric Aasbo. I’ve thought about it a lot since and I still don’t understand, but all we can do is move on and push harder. We did receive a lot of support from fans and within the paddock, which is a great feeling, but not as good as getting that win would have felt. The day after the competition we attended the UTI Liberty Walk event at the UTI campus in Orlando, and enjoyed the day meeting the students as well as a lot of fans who had been out the day before at Formula Drift, always great to get that interaction.

Round Four – Wall SpeedwayAfter the high of Orlando, we anticipated that the MX-5 would be really good in Wall, New Jersey since it is a similar layout to Orlando. Well, we found out that the judges were reverting to the old version of the Wall layout once we arrived after we had created a setup for a different layout. So, we ended up chasing the setup a bit more than we would have liked during practice, and then had a component break during qualifying which meant I had to qualify with a stuck throttle. It wasn’t pretty, but it got us into the field and we learned just how durable our Exedy clutches are! After the event we took the car to the Club Loose Etown Brodown at Englishtown Speedway. That was a LOT of fun, and we’ll definitely be back. Thanks to the guys for inviting me and making us feel welcome. It was another great opportunity to interact with enthusiasts. 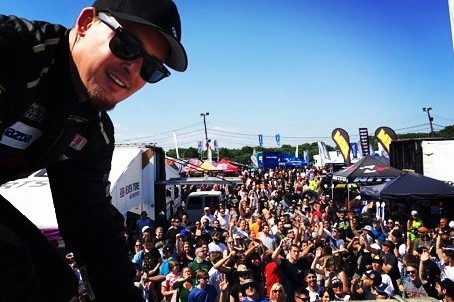 We had one more stop before flying home – at our longtime partner Mishimoto. They’ve supplied parts for our cars for seven seasons so it was great to meet and thank their staff for the great support. And then they tossed me the keys to their brand new Ford Focus RS and asked me to do some donuts for a promo film. It’s got this awesome Drift mode that made it pretty easy and a lot of fun!

Next stop is Round 5 in Montreal and on my way home will stop to visit long-time supportersExedy in Ann Arbor, Michigan to meet their staff and leave tire marks in their parking lot. We’ll see all of you in Canada!