After breaking our diff at Round 3, we now have our new diff with a slightly different ratio, going from a 3.9 to a 4.3 I was super excited to see how it improved the driveability of the car. For round 4 of Drift Cup at Teesside Autodrome we had practice day the day before on Saturday which gave us plenty of time to get use too the track and the new gearing. 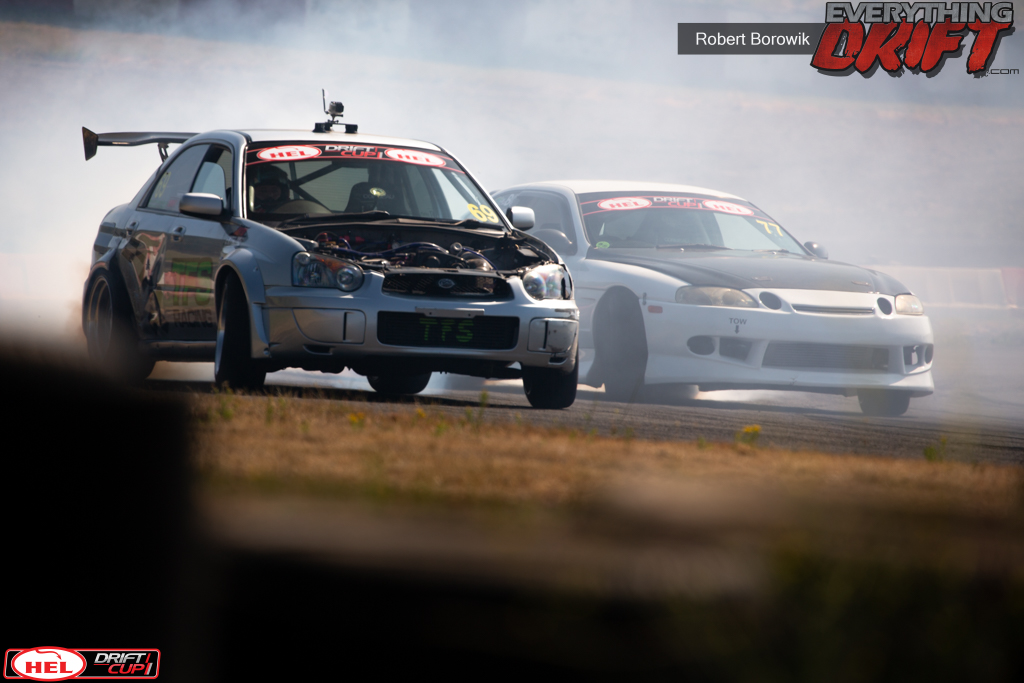 Come Saturday morning and practice was well underway it was a super-hot weekend and after a few runs engine temperatures were through the roof so we decided to take the bonnet off. 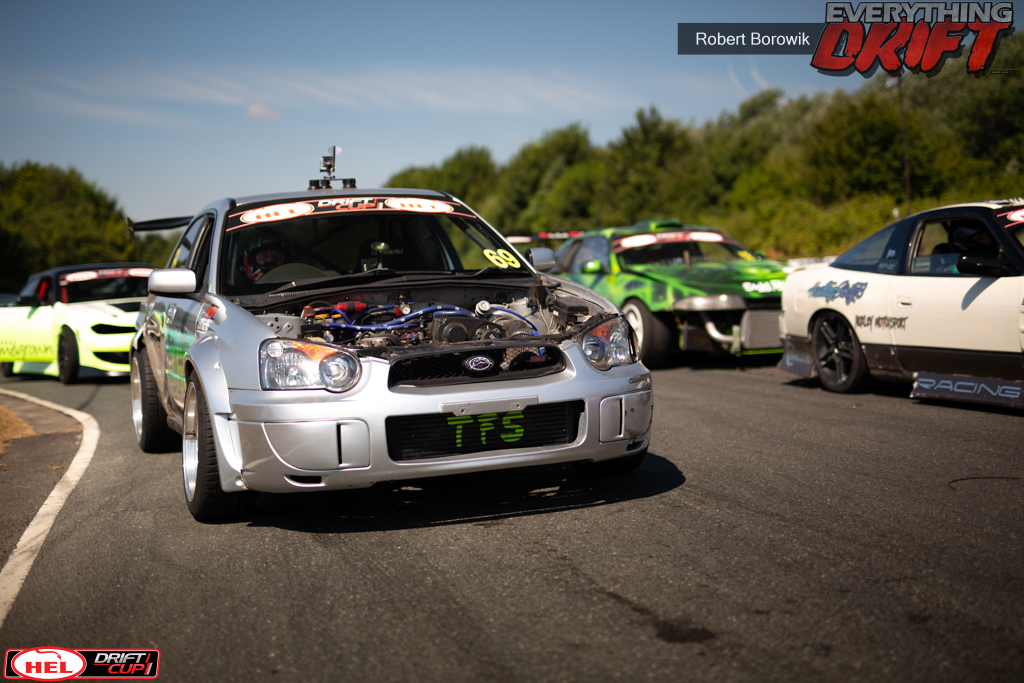 Practice was going ok but I was completely missing clip 2, as I was worried about going too fast and shooting off track. Moments later and an opposite flick entry went badly wrong causing me to go off into the tyre wall, after the car stopped I was unable to turn the steering so I knew something had broken, as I wasn’t able to drive the car off track we had the car recovered back to our pits where we could assess the damage. 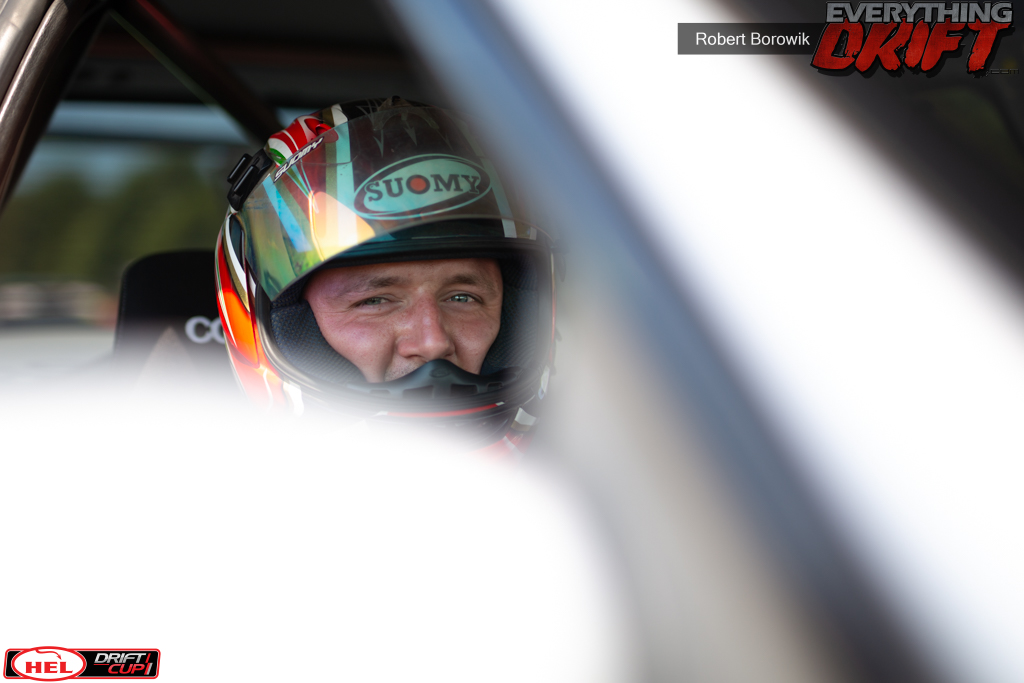 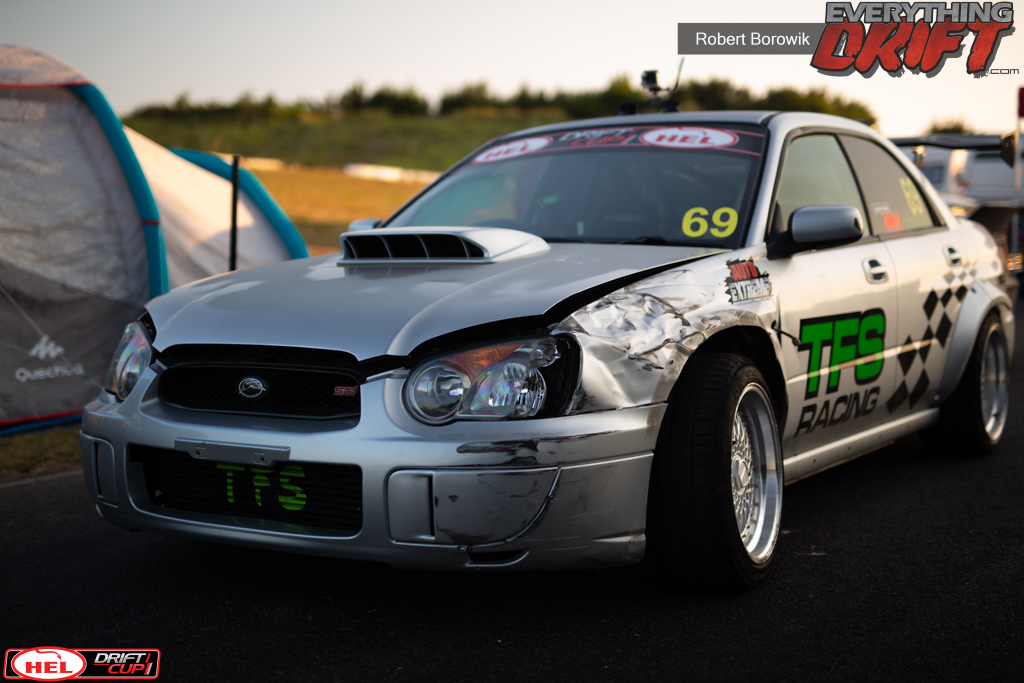 Unfortunately there was quite a lot of cosmetic damage but worst of all I bent the lower wishbone, that’s a part I didn’t carry spare with me I immediately thought that was my weekend over we tried to source some replacement lower wishbones but being a Saturday afternoon we had no luck. We wasn’t ready to give up and decided to try and straighten the arm, a few hours later with the help of Stewart, Rob Cropley and Teesside staff we managed to straighten it as best we could and plated it to add some strength back into it. 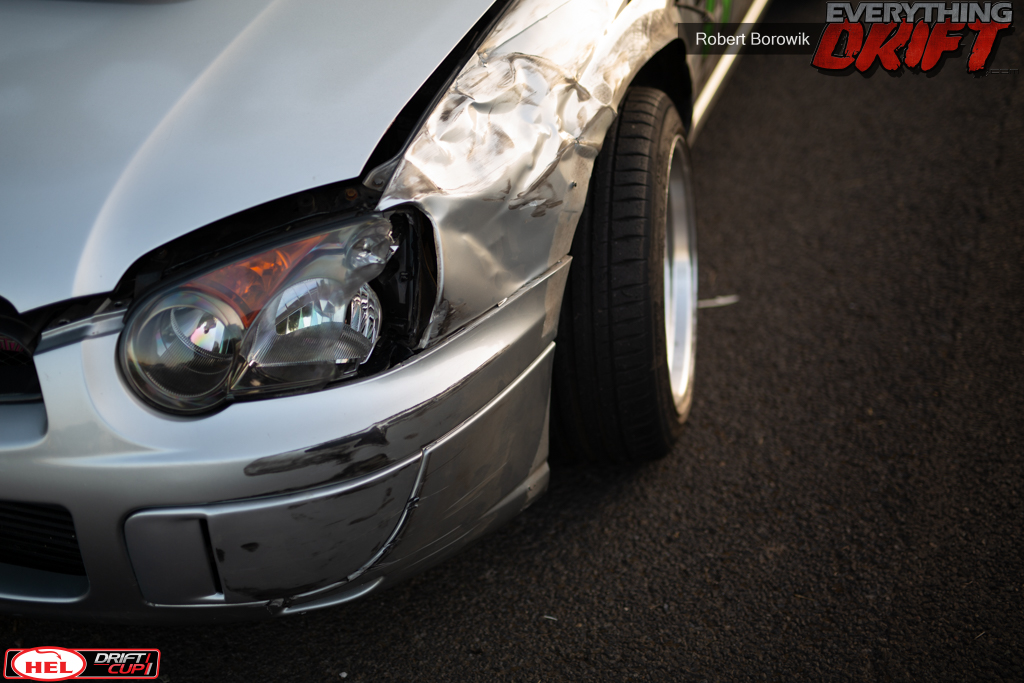 We re-tracked the toe by eye as it was now miles out and went back out on track for a couple of gentle runs to see how to car reacted. The car felt pretty good considering, alignment was all over the place but I was able to drive around that problem, happy that the car was now fixed we had time for a couple more runs then called it day. 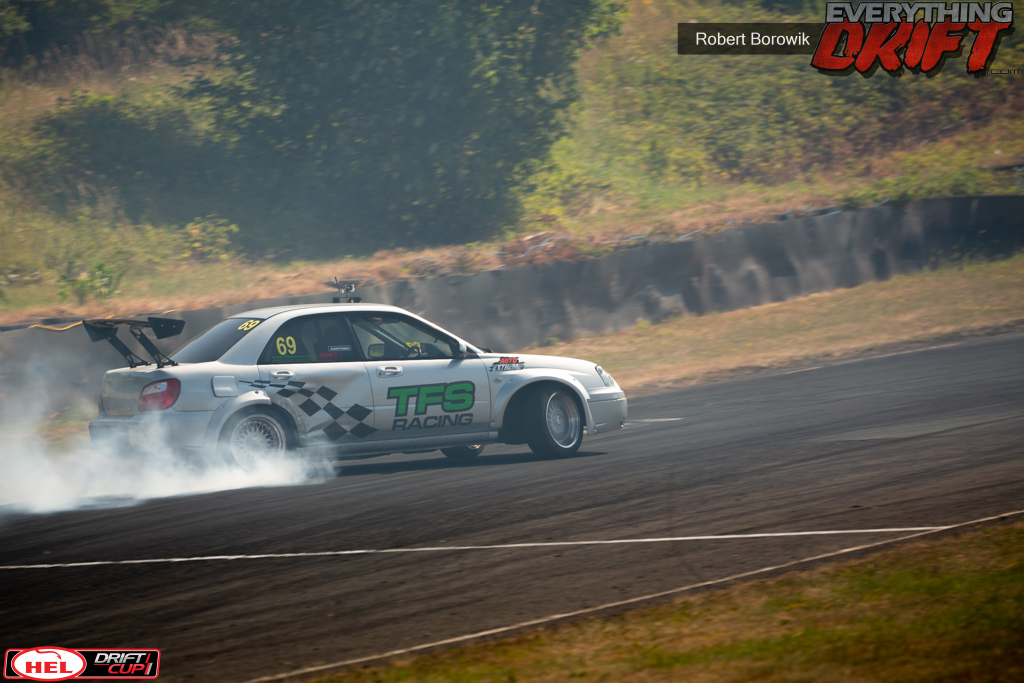 Now Sunday Morning was upon us and we were the first out of track along with Chris Dawson with their currently being no queue we done 6 – 7 back to back runs with each other. On one of my lead runs I initiated too hard and spun out and unfortunately made contact with Chris. 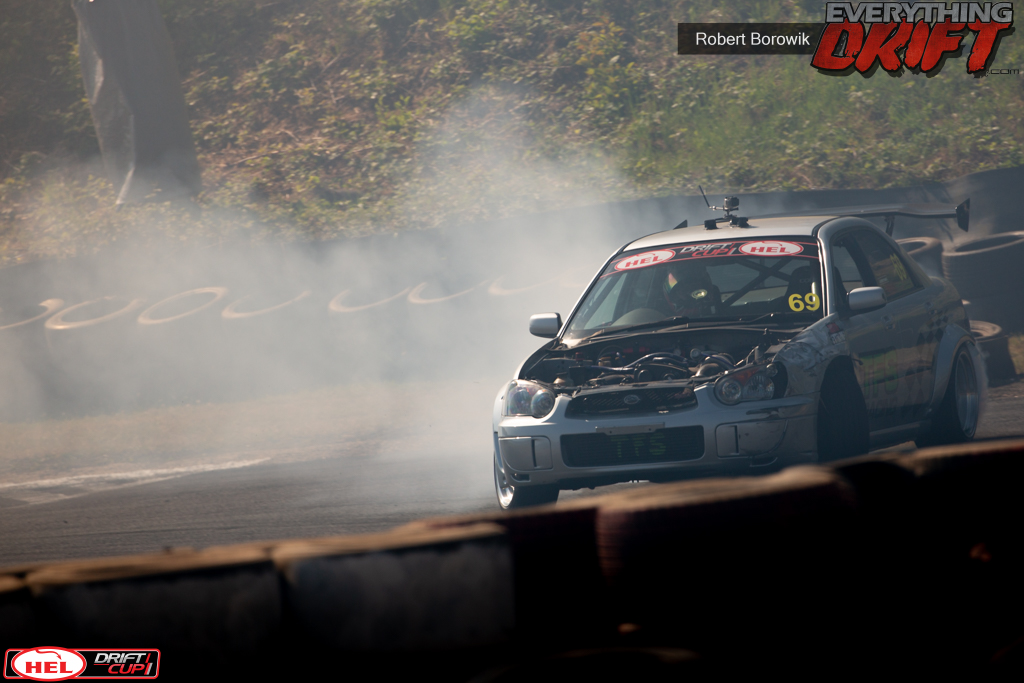 With qualifying now upon us my first run was a little bit sloppy but felt okay. So I decided to go for a big opposite flick on my second run and just dropped a wheel on clip 1 (I didn’t realise at the time but it ripped the sidewall of my tyre apart causing a deflation), gave it a quick clutch kick to help push me out higher to clip 2 then suddenly a bang and loss of drive, just my luck, I initially thought it would be a shaft but I could hear a noise from the front, dropped it into 2nd and I had drive, great just blown 3rd gear out of the box! 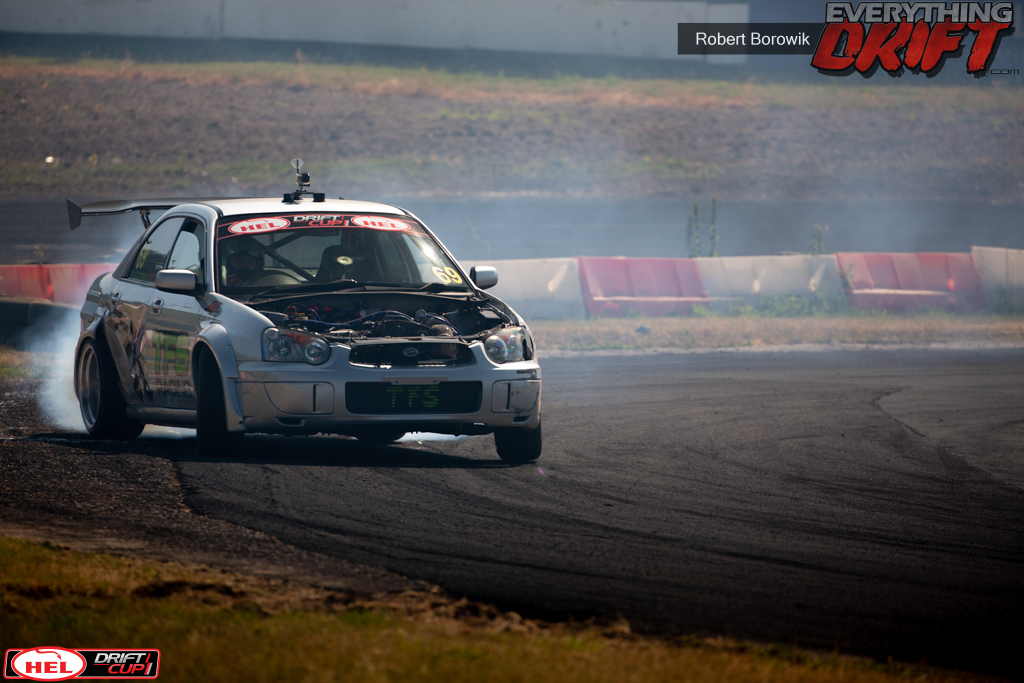 We went on to find out we managed to qualify 13th with my first run! 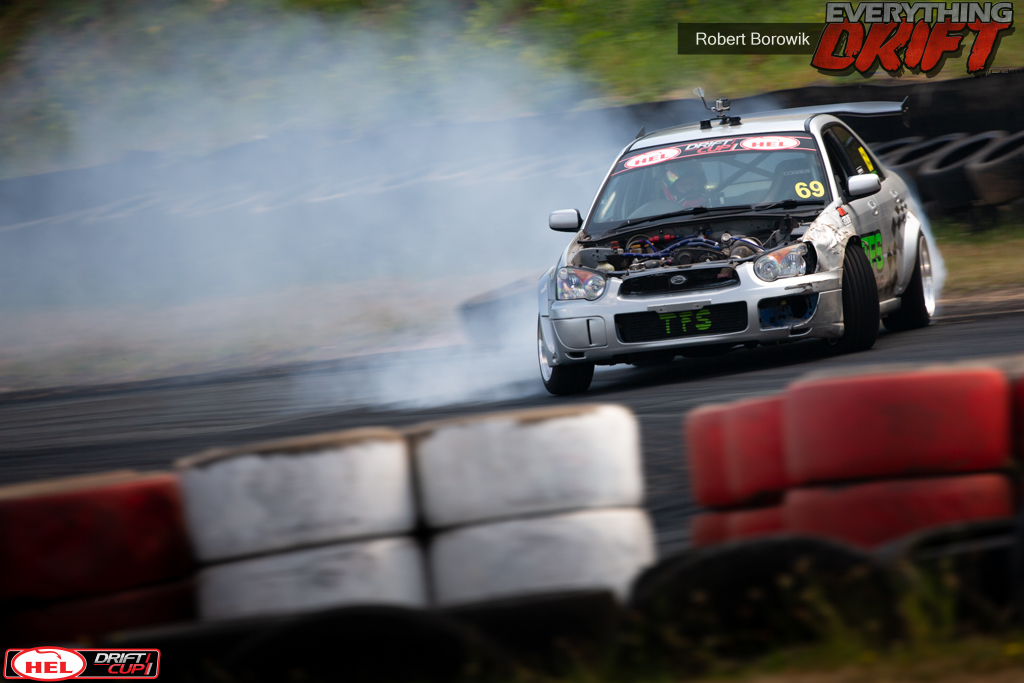 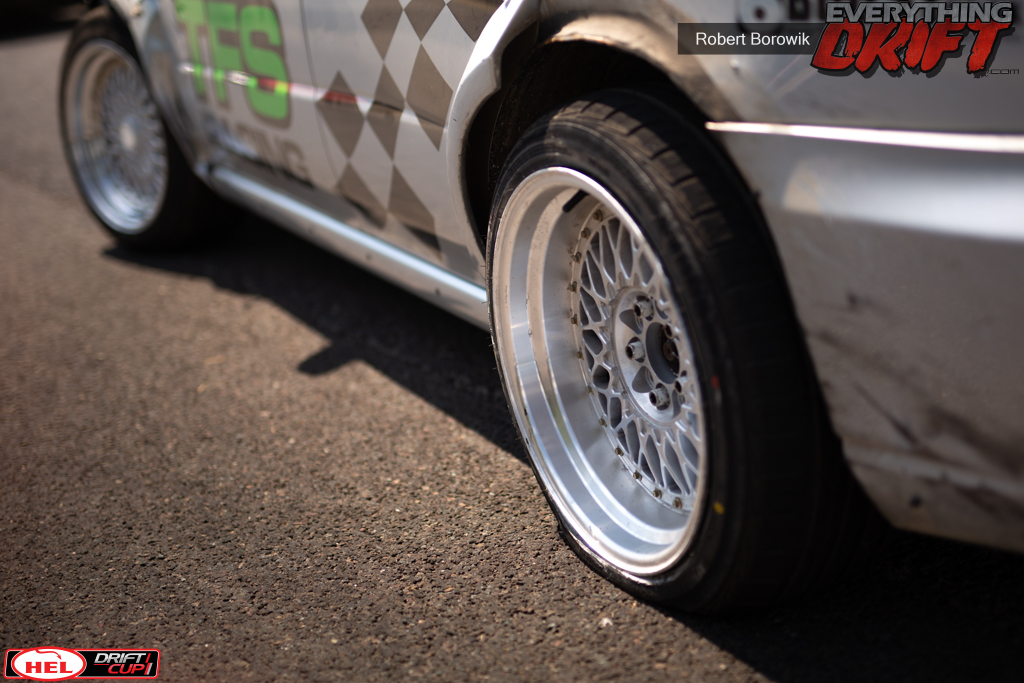 With a choice to try and carry on into battles or give up, giving up is not how we do things so decided too up the tyre pressures and see what we could do with 4th and 2nd gear! 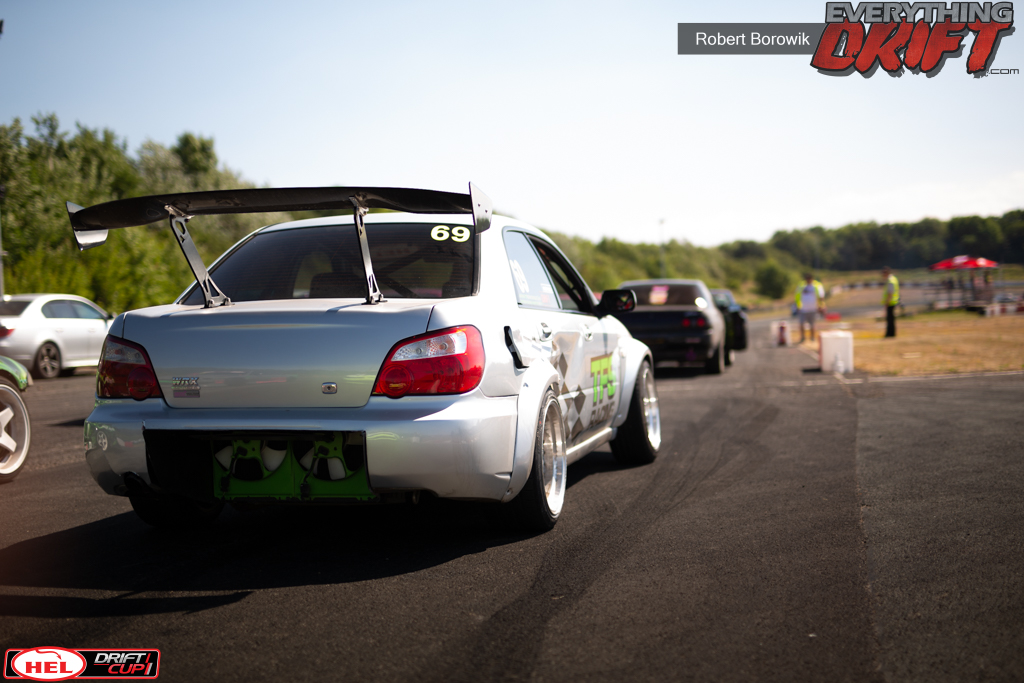 Top 32 now upon us we were paired up against Chris Parham in his S14.5, as the higher qualifier I lead first, put in the best run I could but it really was a struggle around the first corner in 4th gear, knowing I had to give it my all on my chase run to have any chance, It was a very sloppy run from me but I managed to get quiet close with a little bit of light rubbing coming around the last corner too clip 6, to my surprise I somehow managed to get the win! 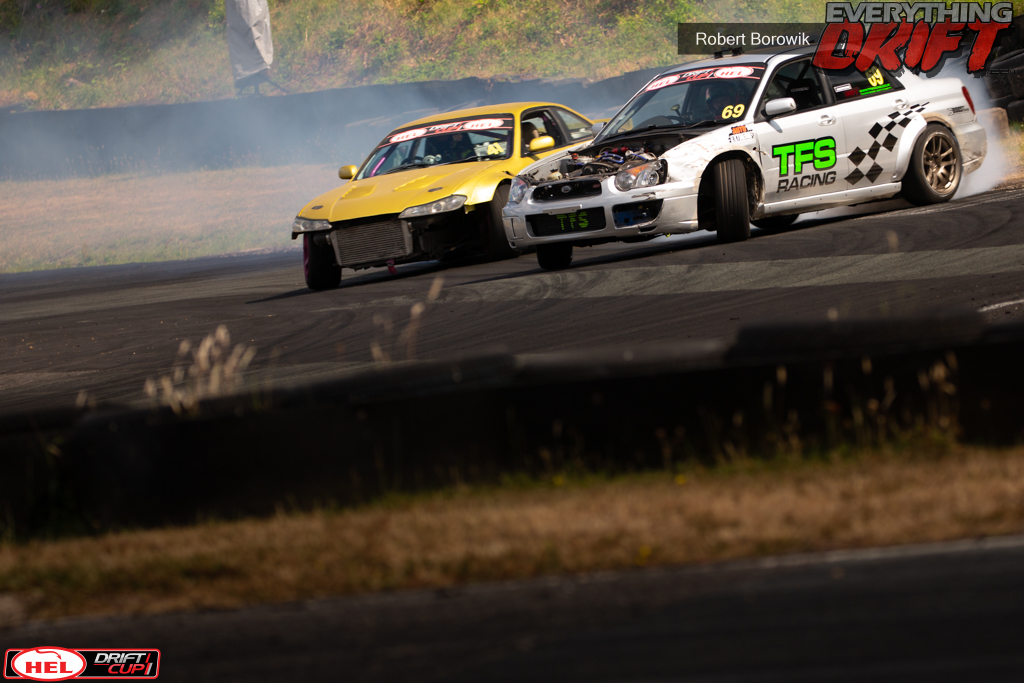 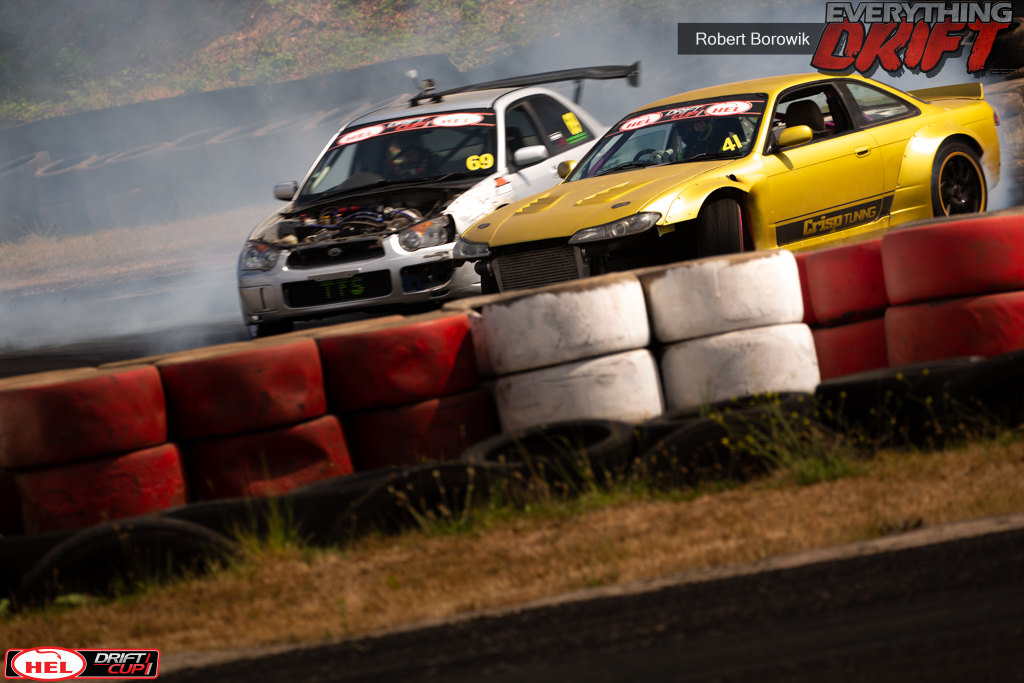 Now too try and do it all again in Top 16 we faced Chris Wright the same as Round 3 in his 350z. Chris was too lead first being the higher qualifier, I came in too hot just after clip 2 and made contact with Chris causing me too straighten and had too re-initiate, then I transitioned too early going out too clip 5 and it put me on the wrong line for the last corner and clip 6. We switched around and i managed to put in an okay lead line and Chris stuck too my door the whole way round giving him this win! 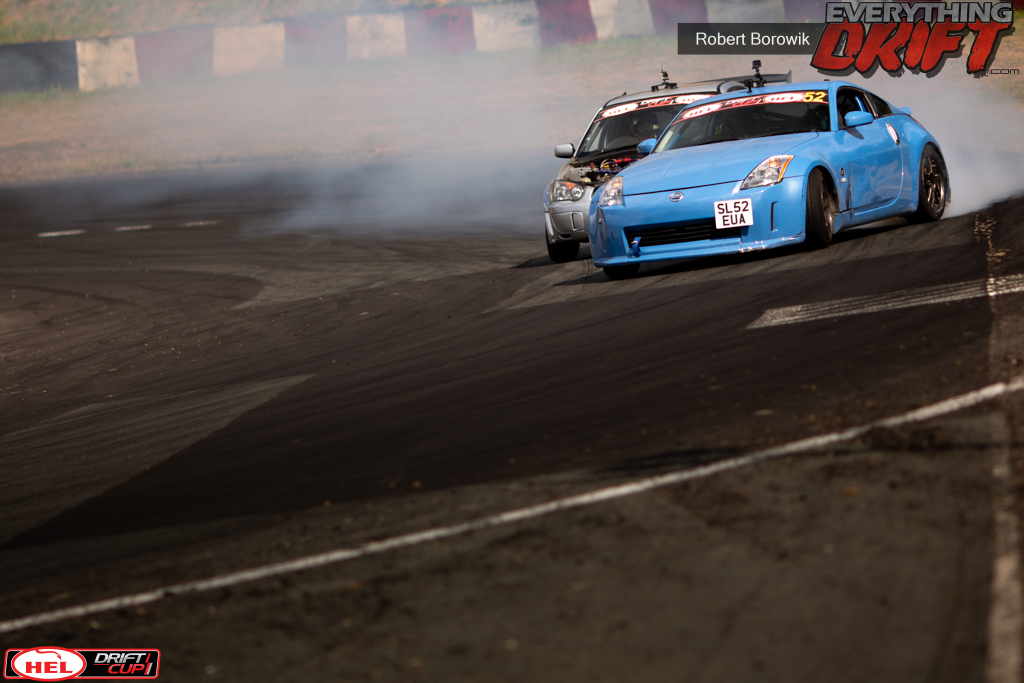 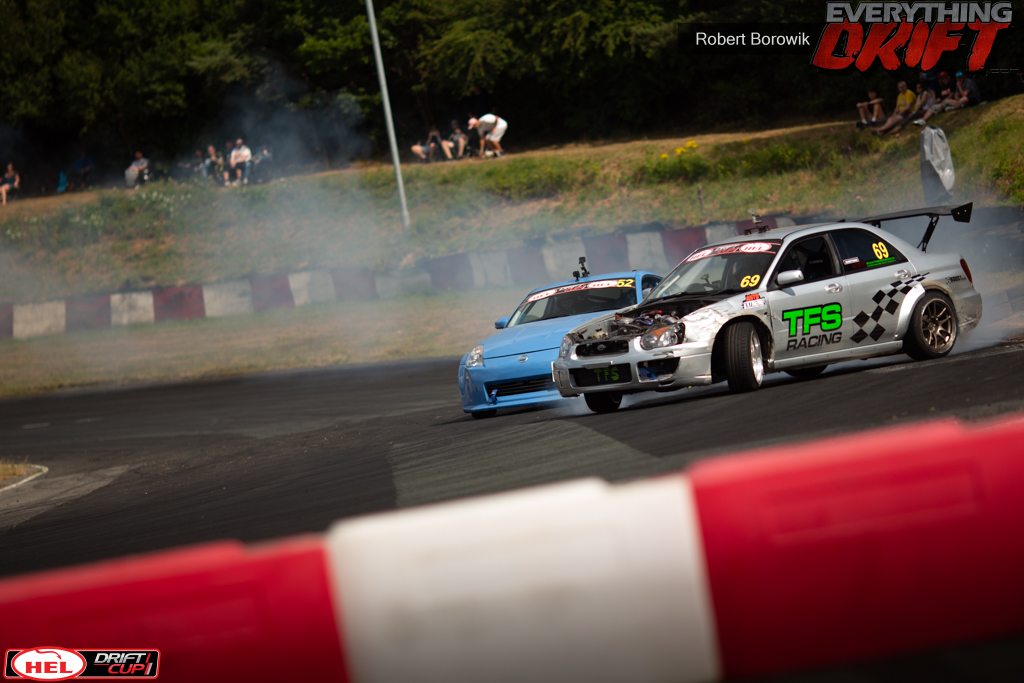 A pretty hectic weekend for us but given the circumstances I was happy coming away finishing in 10th position. We are just about hanging on to 7th position overall in the championship going into the last round at Driftland in September. Loads of work to do beforehand but as always we will be ready and Skybaru will be back looking pretty again awaiting her next battle! 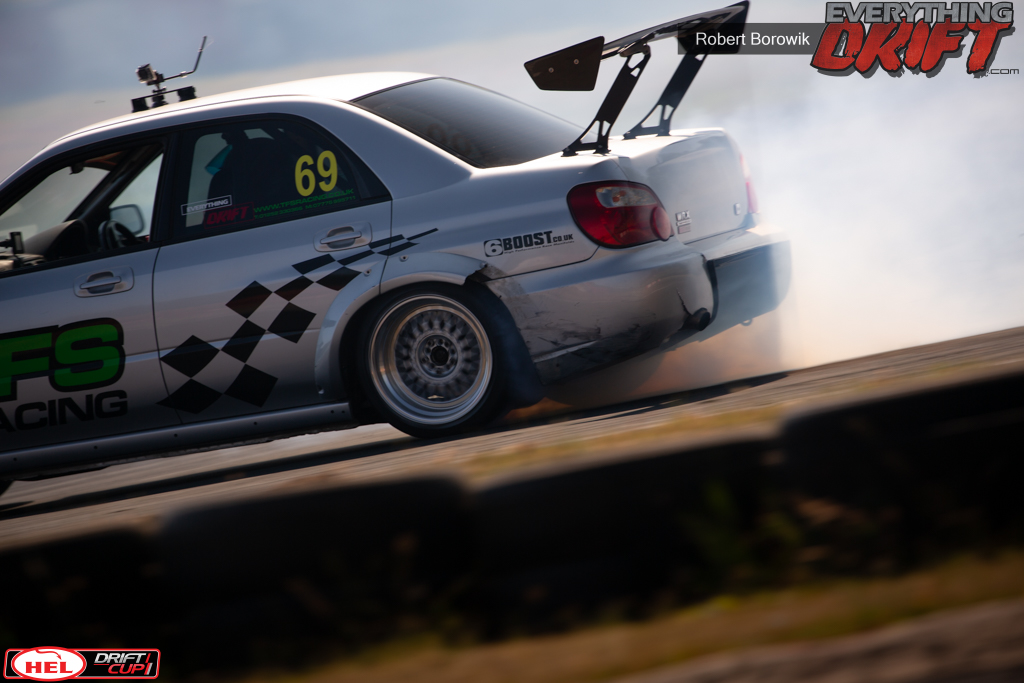 A huge thank you TFS Racing, Fusion Motorsport, Auto Extreme, Garage-D, Rob Cropley and everyone else for their support and help making sure I make it too to every round and keeping me on the track. 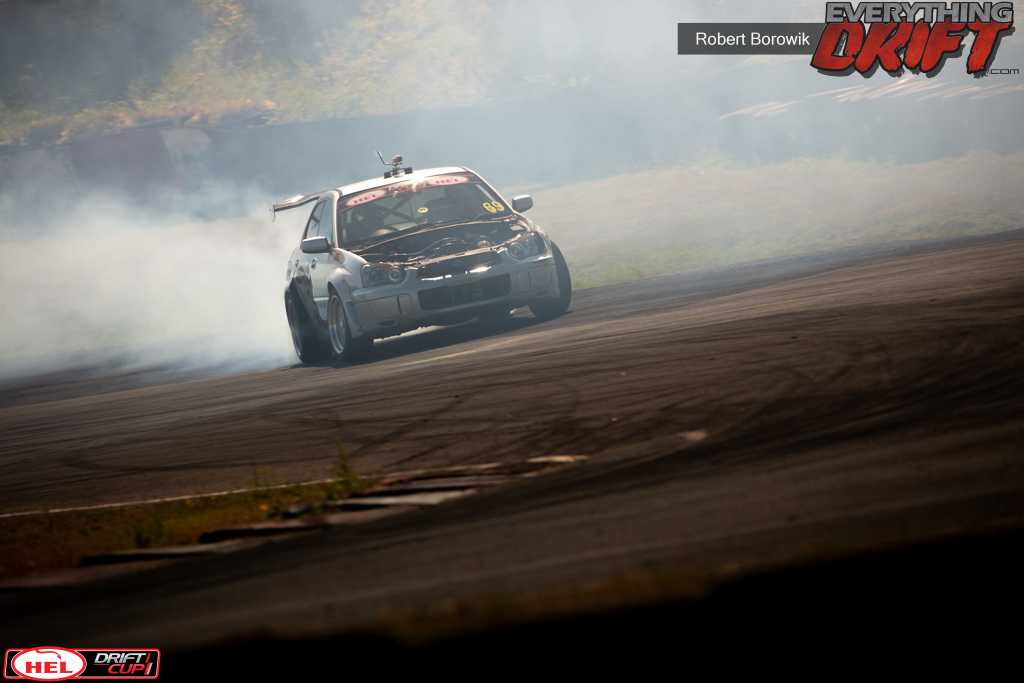 « 2018 HEL Performance Driftcup: Round 4 – James Moore
FORMULA DRIFT TAKES THE PRO AND PRO 2 CATEGORIES TO THE NEW ST LOUIS ROUND FOR ITS ACTION-PACKED RETURN TO THE MID-WEST »