Wow Round 5 did not disappoint! 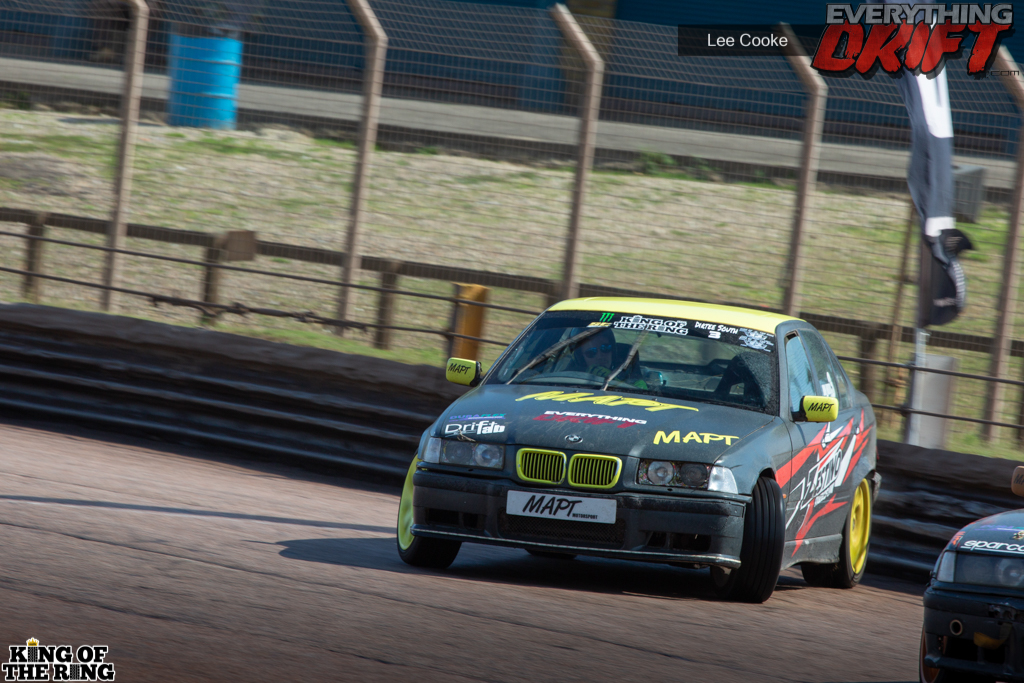 The pits were buzzing and with the season drawing to a close, everyone was keen to grab some vital points. There were the usual hardcore drivers as well as some new faces. Looking at the quality of the cars they brought with them, this clearly wasn’t their first rodeo. 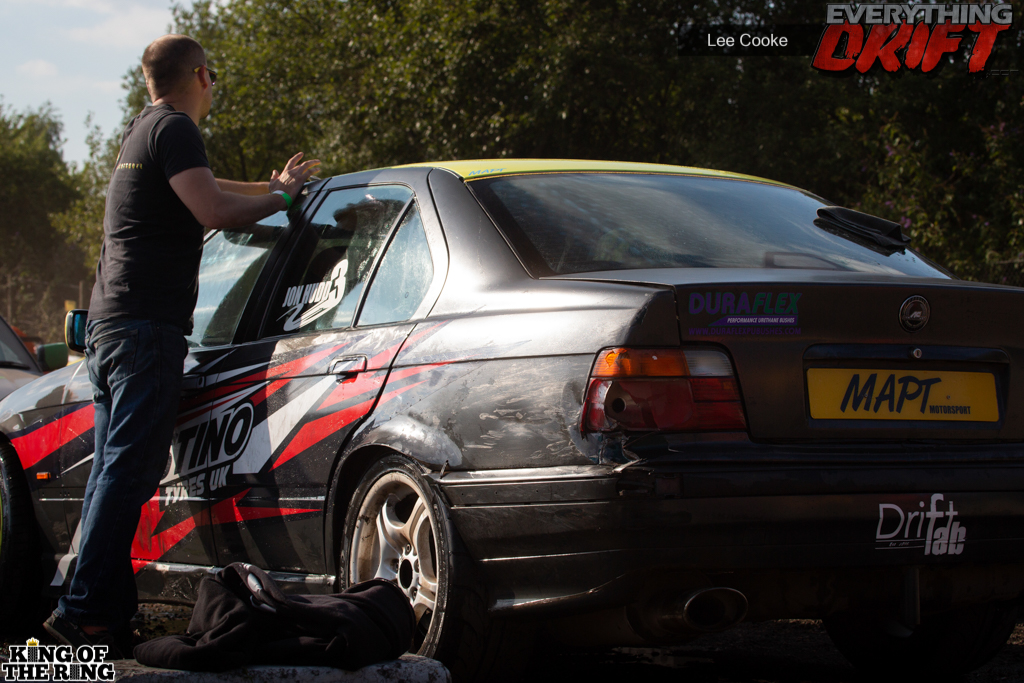 I had been playing around with tyre pressures since the last round and had decided to try something different. I went out for a quick session early on and the car felt better than it had all season. I put a new pair of Zestino Gredge 07RS on with enough time for a handful of practice sessions before qualifying. The tyres had insane grip and I was full of confidence. I kept pushing hard and really managed to get the line dialled in. Sadly this pushing backfired; I overcooked a transition on the straight and knocked the rear wheel into the kerb with enough force to damage the suspension. After an inspection in the pits, it was clear that there wasn’t enough time to repair the car. The reality hit that I was going to be in for a difficult night as I had lost all my grip and had no way of getting it back. 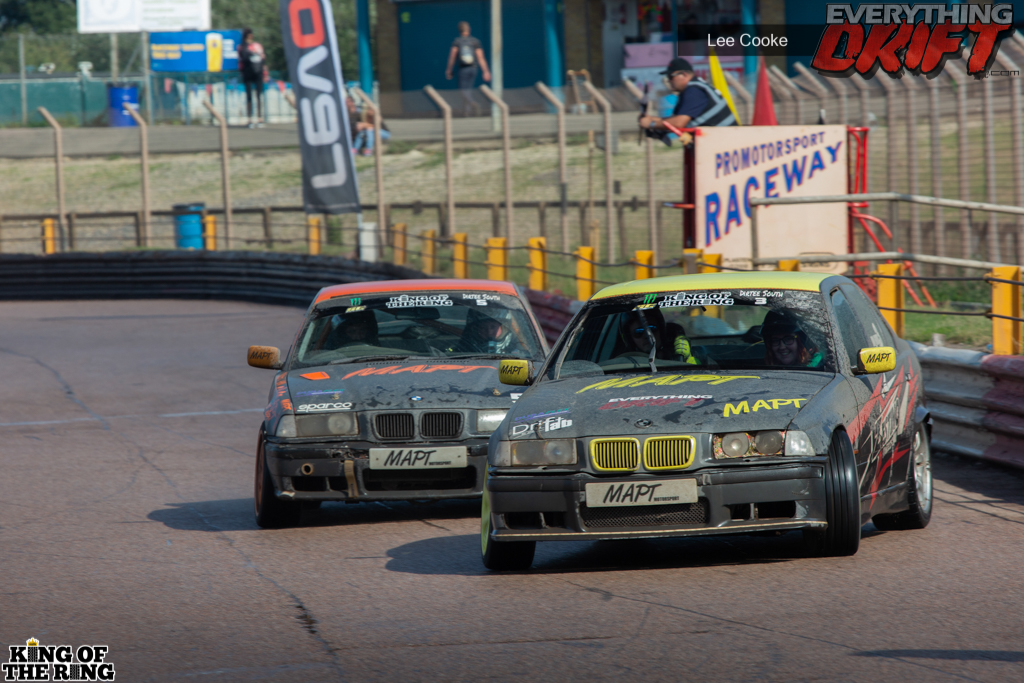 I was first car out to qualify again this round. There is a magical feeling about being the first car out knowing that you are setting the bar for the judges. Anyone that knows me or follows my progress will be aware that qualifying is my achilles heel. Tonight was no exception, I qualified 12th again. 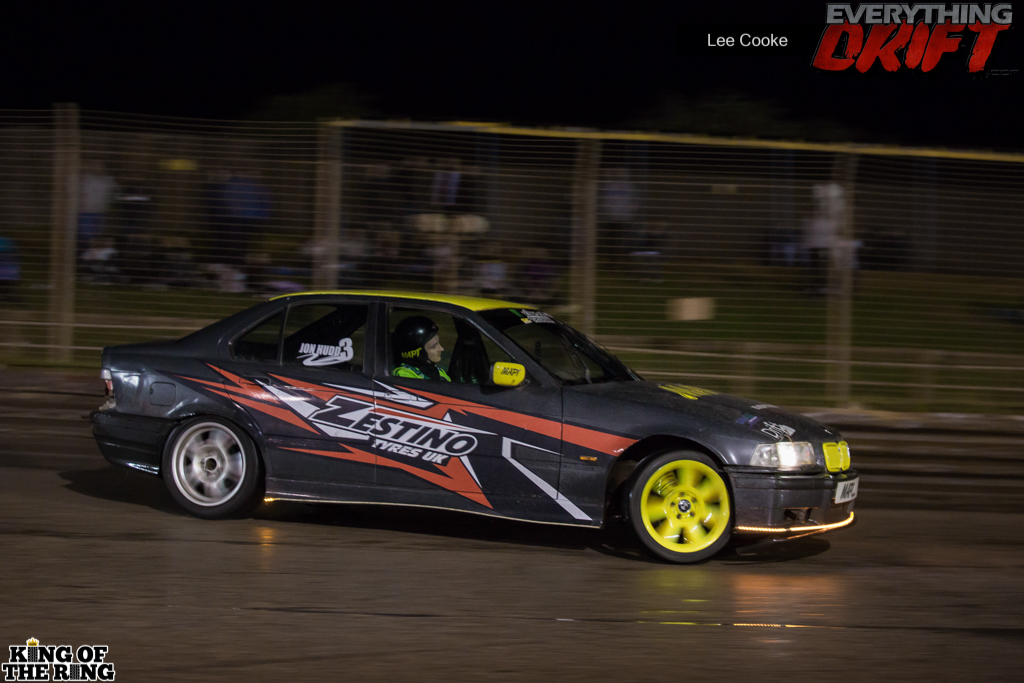 My first battle was against Peter Spinks – This was the third time we have battled this year and each time has got harder. The pressure was immense, I knew that if I got knocked out in the top 32 that it would be the end of my championship title dreams and my opportunity of progressing to Drift Cup next year. I put on a good lead but a lacklustre chase until the last wall run where I took a big dive and got that much needed proximity to earn me just enough points for a one more time. 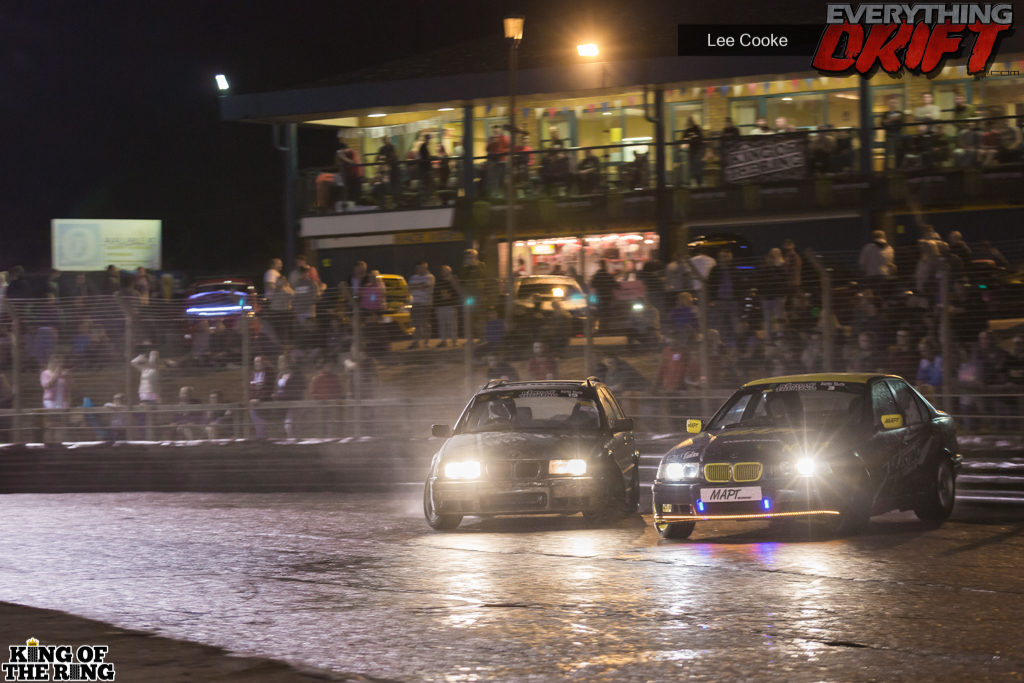 Pete had excellent proximity for the entire run but sadly had a straighten into the last clip. On the chase, I didn’t have the proximity that Pete did but I scraped through with one point in my favour. Way too close for comfort! 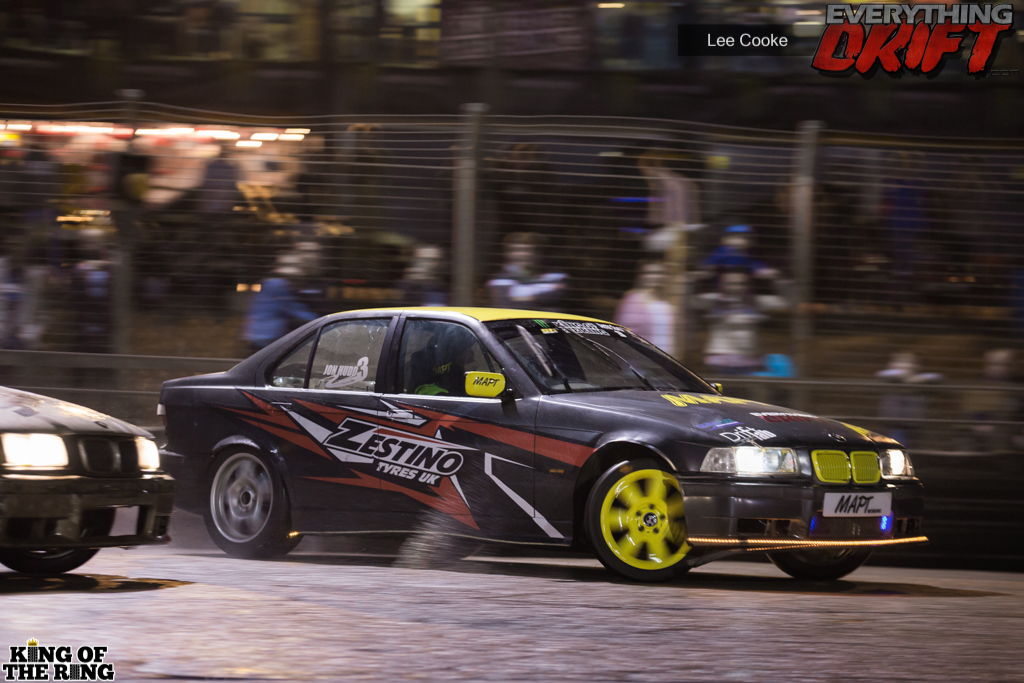 My team mate Alex Chapman was the next hurdle to face. Alex is one of the fastest drivers on the grid and I genuinely believe that the only reason we are not seeing him near the top of the leader board is that he has only been able to attend 2 events this year. My proximity was far from special on the chase run. On my lead, Alex had a straighten into the first clip giving me the advantage – Thankfully that was enough for the judges to award the win to me. 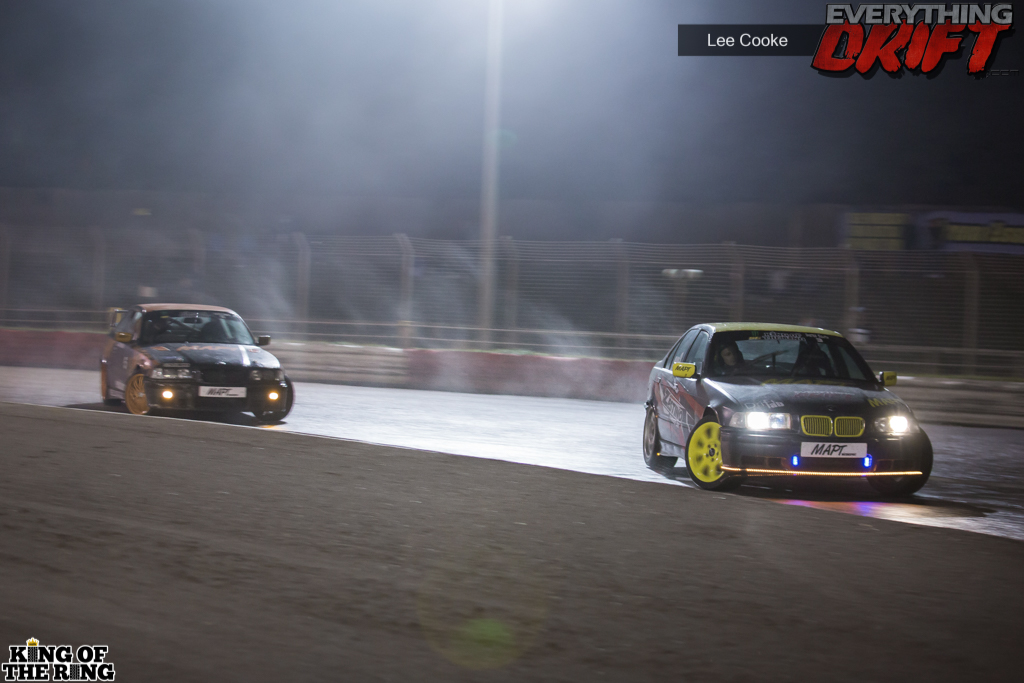 Next up was Lee Reed. Lee has recently come back to King of the Ring after taking some time out. He drives a turbocharged Volvo and with Lee behind the wheel, it is an absolute weapon. He had looked so fast all day that before the battle had even started, most thought it was an obvious outcome. One of the commentators, “Stiggy” had even placed a bet on Lee to win the event.
Lee had qualified in 4th which meant I would be chasing first. I did a massive burnout to overcome the suspension issue and lined up ready to start…in a rather pleasant smokey Zestino haze. Lee’s lead run was exceptional. I was able to keep proximity for the whole run, but did have to sacrifice some angle. Overall, I was happy with the run. In typical Jon Hudd fashion, I scraped through due to better proximity. 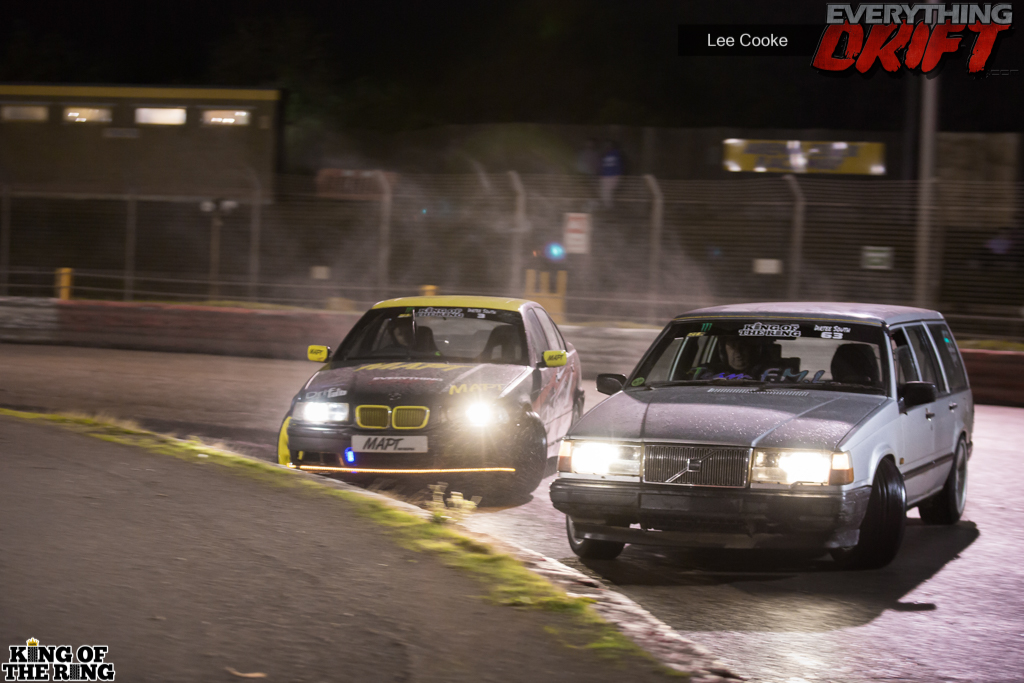 For the top 4 battle I was up against Aurimas Vaskelis. Having had more than one controversial battle with Aurimas in the past, it was good that we were able to clear the air before hitting the circuit. Aurimas is a BDC Pro driver so I would be lying if I said I didn’t feel some pressure. As I set off the line in the chase position I was too far forward and got caught up on his rear bumper impeding his initiation. This didn’t seem to phase Aurimas and he shot off into the distance whilst I was trying to get myself back on line. I came into the wall run really hot, 4 wheel sliding towards the wall with my fingers firmly crossed and my foot stupidly still planted! My front grip came back and I was door on door. I made another error into clip 5, making contact with the wall but carried on without too much disruption to finish the run nice and close to his door. I then lead and Aurimas’s proximity was superb but he made a few errors, especially on clip 5 which he completely missed. The judges couldn’t separate us so called a re-run. 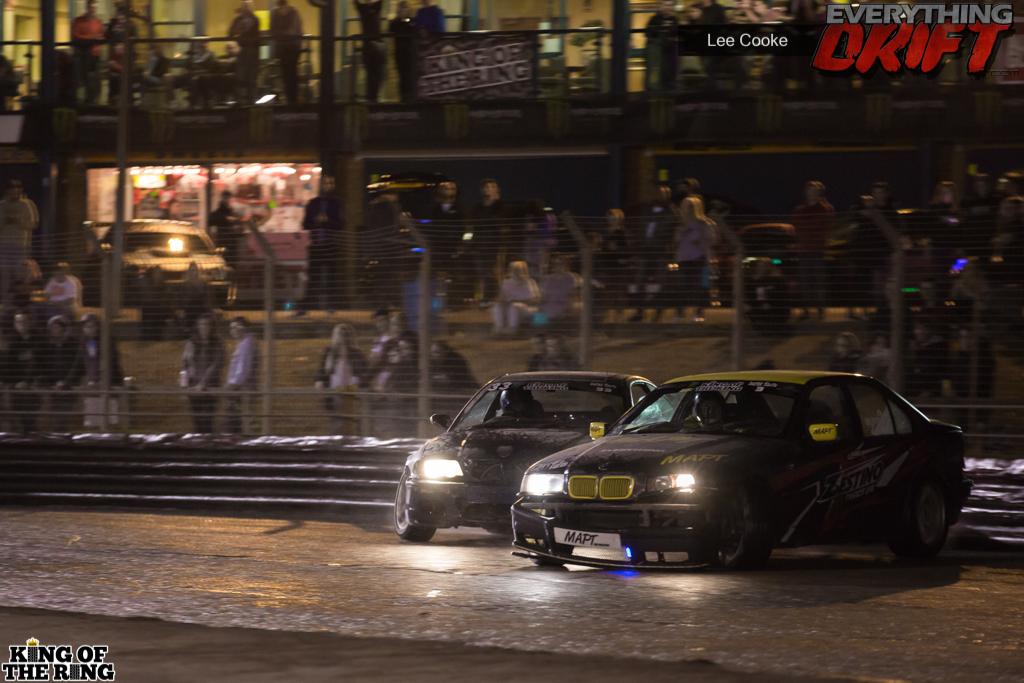 Aurimas lead. Apart from a missed clip, the rest of his run was faultless. My chase went well but I wasn’t sure if it was enough to allow me to hold onto the glimmer of hope that I would make the podium. I couldn’t believe it, we had another re-run….this time the judges had no choice but to decide on a winner. This battle was only going one way. We both wanted it and were going in hard! Aurimas went in super fast on his lead and I was a long way back. I sacrificed the last clip myself to get on his door through the last wall run. Apart from a few missed clips I felt best case this would be scored a 5:5. 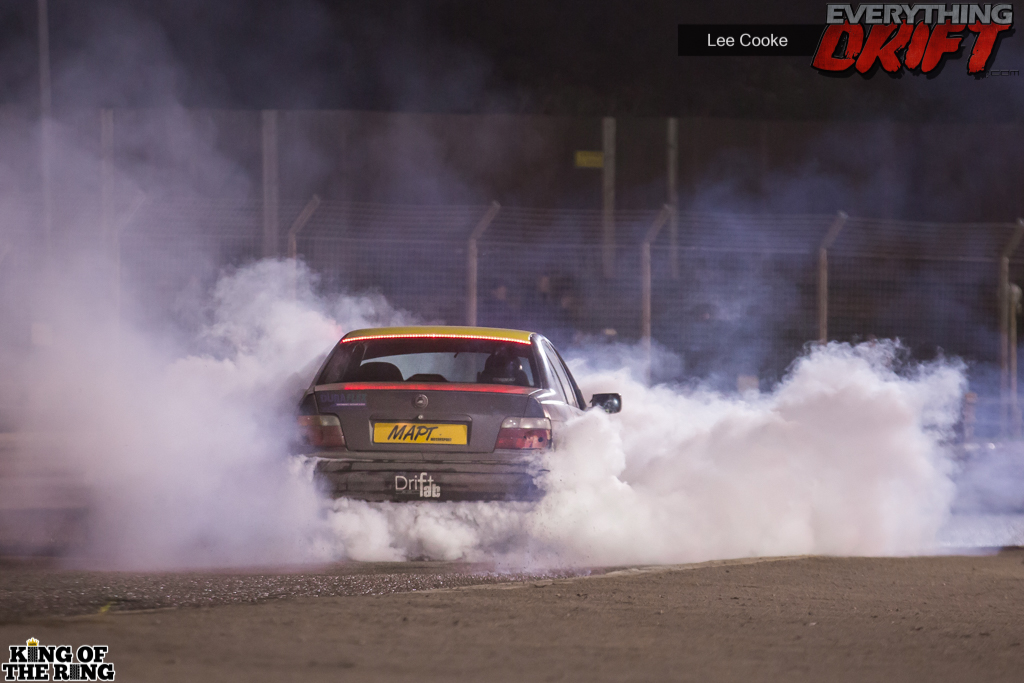 I took off for my lead run with the niggle in the back of my head reminding me that I had the handicap from the damage done earlier in the day. As we entered the first wall run, Aurimas made significant contact with my rear arch. I applied full lock and managed to save it. I jumped back on the power and knew that if I could put on a faultless lead that I had a chance of stealing the win. Focusing on hitting all the clips worked… I was in the final. 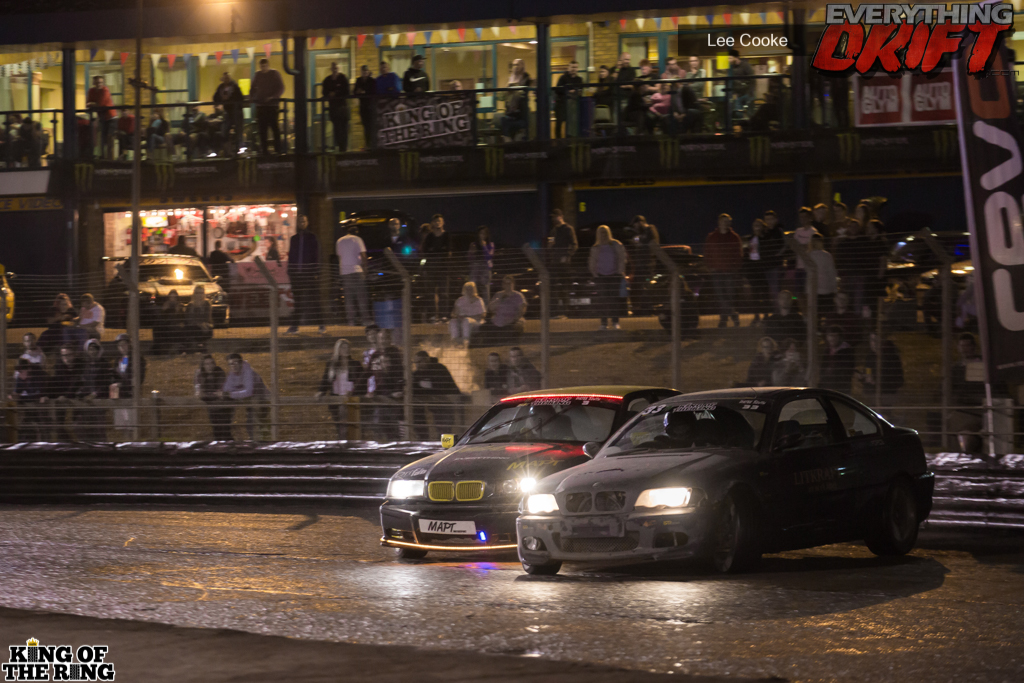 I was now in the final against Nerijus in his Skyline. I had seen Nerijus in practice earlier in the day and knew he was by far the fastest car out there. I don’t know how he has managed to become so fast, but it is safe to say that he is going to be the man to beat in the last round of the Championship. He shot off down the straight, missing clip one and entered the wall run. I took chase focusing on hitting the clips as this had got me through all the previous battles. I knew deep down that being so far behind I was at a disadvantage going into my lead run. 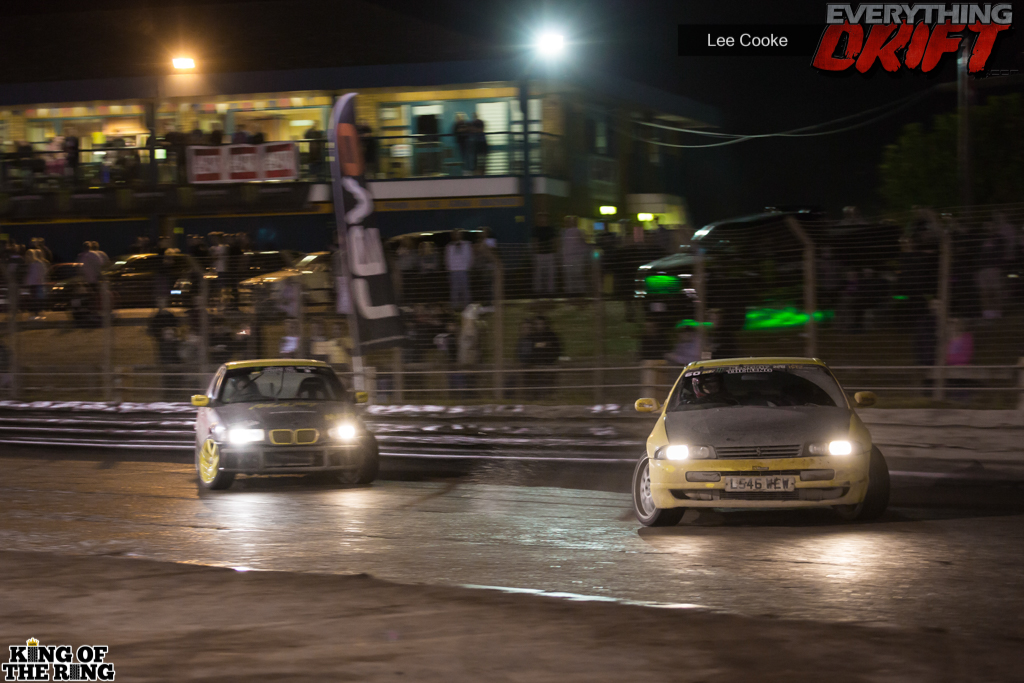 I put on a very strategic run in the hope of making it difficult to follow and thereby maybe forcing an error. Having spent so much time on track with Nerijus in the past however, he knows all my tricks and was one step ahead, taking the win by one point. I would like to congratulate him for finally putting it on the top spot after being in the top four so many times before. 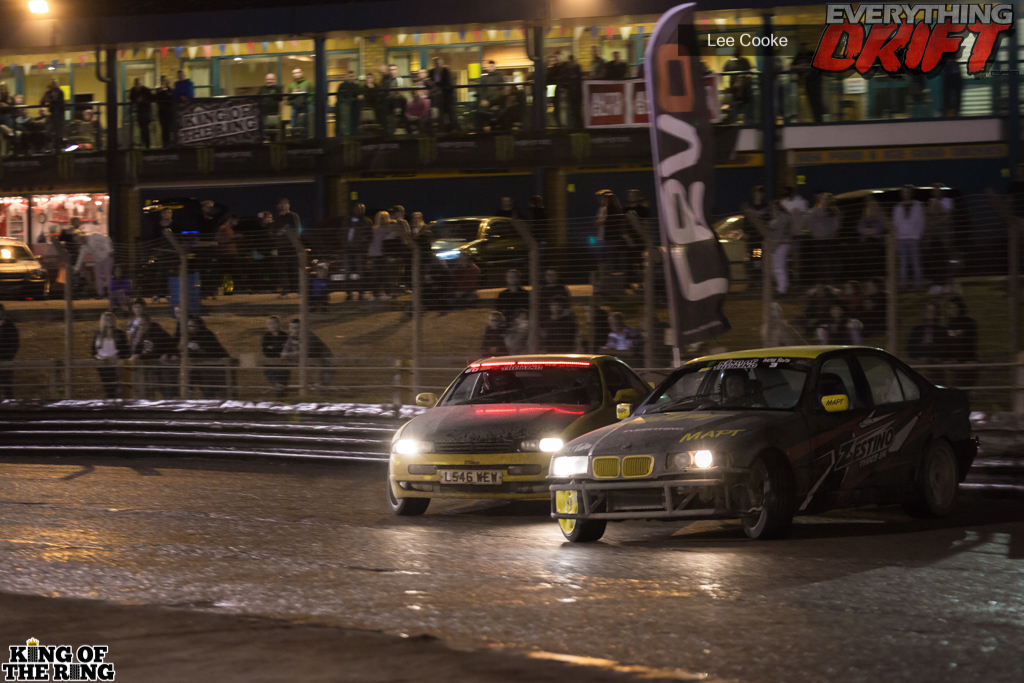 The final is on October 6th and is expected to have a record number of drivers. Not only is the Championship all to play for with myself currently running in 1st and my MAPT Motorsport team mates, Mark Chapman in 2nd and Paul Parnell 3rd but it is guaranteed to be a night to remember with Arena Essex sadly closing their doors this November. 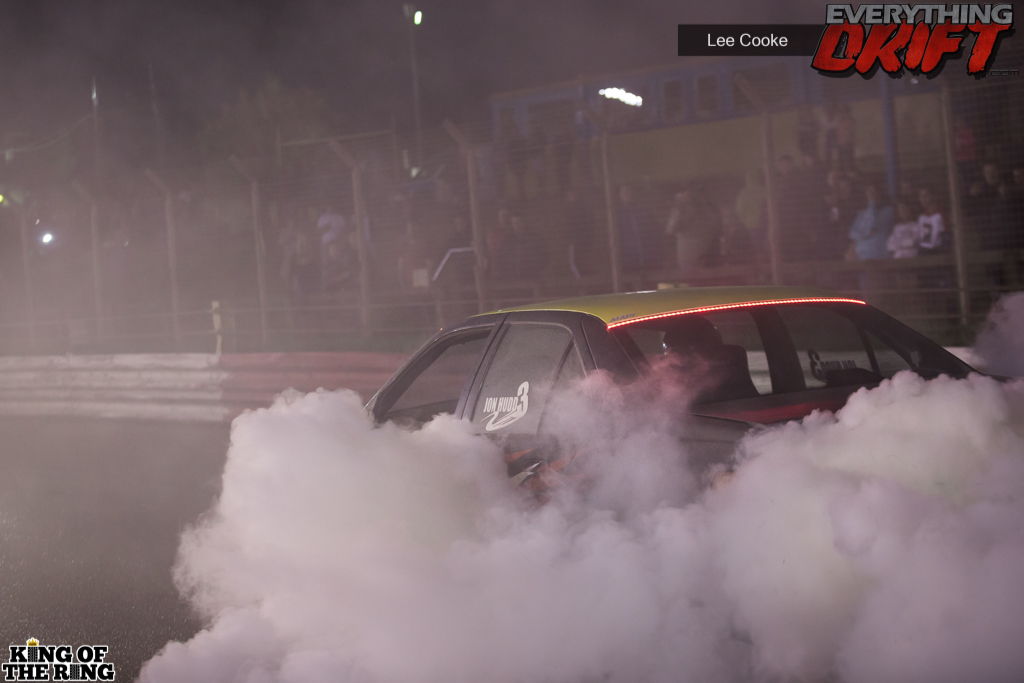 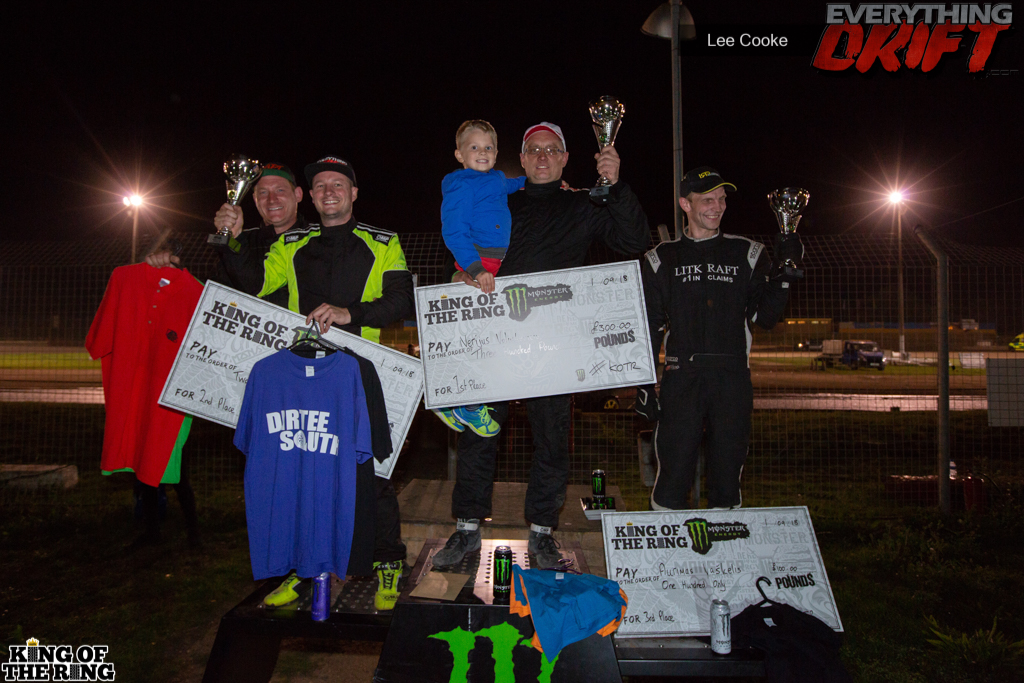 Check out http://www.kingoftheringuk.com for more information.

I would like to say a special thanks to all my fans, supporters and sponsors including Zestino Tyres UK, Driftfab, EverythingDrift.com and Duraflex Extreme Bushes. 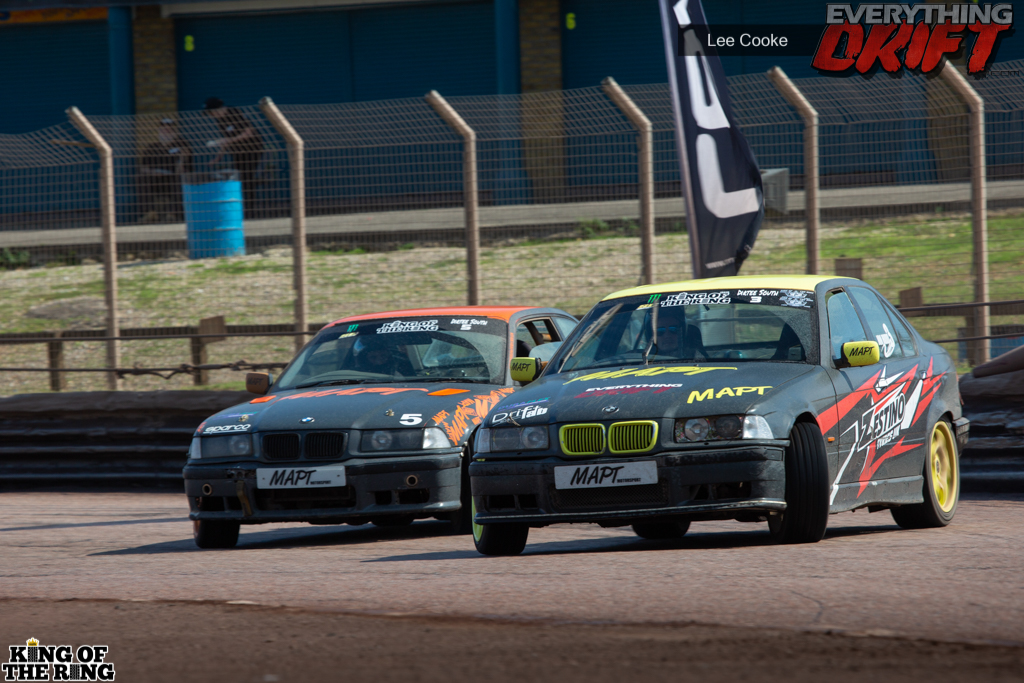