We Ride the Streets- Sideways is a documentary/film we released in 2014 which looks at the roots of drifting in Montreal, how it all started, and the current scene of this adrenaline pumping Motorsport! This is the first full feature film by Paramount Visuals. 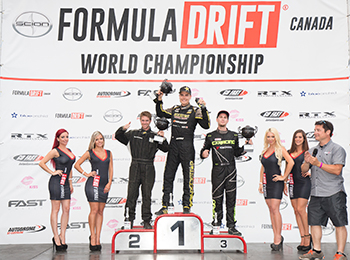 September 10, 2015  Scion presents Formula DRIFT Canada entered Autodrome St. Eustache for the 8th Round of the inaugural Formula DRIFT World Championship. Fredric Aasbo in the Rockstar Energy Drink / Hankook Tire / Scion tC take the victory to extend his World Championship points lead.Formula DRIFT Canada at Autodrome St. Eustache was the second world championship round outside of the U.S. Thousands of fans came to witness the on-track action from 39 drivers that represented 8 different countries including the home country of Canada.
Canada has shown to be a valuable market for the Sport and the Series. The fans here proved once again that they are some of the most enthusiastic fans in the world, said Jim Liaw, President of Formula DRIFT. The drivers awarded the fans with a dynamic and dramatic competition. END_OF_DOCUMENT_TOKEN_TO_BE_REPLACED

The Autodrome St-Eustache, commonly referred to as the Canadian House of Drift, is extremely honored to have been chosen by the world’s leading Professional Drift Series,  stated Alan Labrosse, owner of Autodrome St-Eustache. As exclusive host to the inaugural Formula DRIFT Invitational Competition to take place in Canada, we continue to show our commitment to the evolution of the sport of drifting in this country. Competitors, fans, and sponsors from across Canada and the USA will have the opportunity to be a part of history and enjoy the excitement of world class professional drifting.”

The Formula DRIFT Challenge will be held on August 31  September 1 at the same venue. For the first time ever Formula DRIFT drivers will be stepping foot on Canadian soil to compete in a top 16 competition against the best Canadian drifters. Tickets will start at $20 for on-site Sunday entry, while Mondays on-site price will be $35. Tickets for both days will be $50 at the gate and $40 online for the weekend pass. The event will feature a vendor village, skateboard demo, and Offset Kings car show.

To be able to bring Formula DRIFT to the Autodrome St-Eustache, Québec’s most popular motorsports venue, during their 50th anniversary is a great milestone for us, said Jim Liaw, president and co-founder of Formula DRIFT. Canada has a great drifting culture and to be able to help grow the sport in this region is a major accomplishment.

The 2014 Formula DRIFT season will continue with Round 2: Road to the Championship in Atlanta on May 9-10. For more information visit: www.formuladrift.com and find Formula DRIFT on Instagram @formulad, Facebook www.facebook.com/formuladrift and Twitter @FormulaD.
END_OF_DOCUMENT_TOKEN_TO_BE_REPLACED

2012 DMCC: Round 3 is in the books and here’s the proof to that effect.  Full gallery and coverage now up.   Congrats to Pat Cyr, Bob Patinka and Francis Tasse.  Full Gallery located here…