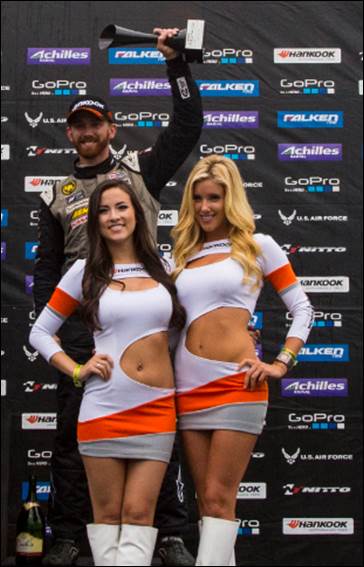 WAYNE, N.J., July 21, 2014 – For the 5th time this season Hankook Tire driver Chris Forsberg was on the winner’s podium this past weekend at Evergreen Speedway in Monroe, Washington having secured a third place finish at Formula Drift Round 5: Throwdown.  Forsberg’s third place finish marks his fifth consecutive podium appearance of the season.

With the weather cooperating all weekend and an at capacity crowd in attendance, Forsberg in the Hankook Tire/CFR Nissan 370Z battled his way from Top 32 on Saturday making it to third place on the podium once all racing was said and done.  Hankook Tire teammate Fredric Aasbo finished the weekend just behind Forsberg in fourth place.  Forsberg’s latest podium keeps him in first place overall in the 2014 Formula Drift Professional Championship points race.  Teammate Aasbo currently sits behind Forsberg in second place in the points race. END_OF_DOCUMENT_TOKEN_TO_BE_REPLACED 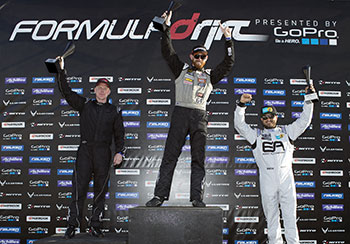 Long Beach, Calif.  April 6, 2014  Formula DRIFT presented by GoPro kicked-off the first event of the 2014 season with Round 1: Streets of Long Beach to a sold out crowd. Chris Forsberg in the Hankook Tire Nissan 370 Z takes the victory and the lead in the chase for the championship.

Round 1: Streets of Long Beach started off the eleventh season of Formula DRIFT to a sell out crowd. Over 20,000 fans gathered to experience the drifting action and excitement on the famous Streets of Long Beach Grand Prix course. The Dailymotion Livestream partnership saw over 230,000 unique viewers watch the Driftstream over the event weekend with over 1 million views in a 24 hour period.

It is truly a fantastic feeling to see not only the live event attendance grow steadily year after year, but also the global Driftstream audience, says Jim Liaw, President of Formula DRIFT. We pride ourselves in being able to provide entertainment to such a young, engaged and tech-savvy audience.

END_OF_DOCUMENT_TOKEN_TO_BE_REPLACED

Long Beach, Calif.  March 4, 2014-  Formula DRIFT has announced the return of all 4 Major Tire Partners; Achilles, Falken, Hankook and Nitto and returning Tire Suppliers; Kenda, Maxxis and Yokohama. In addition, GT Radial signs on as a new Tire Supplier for the 2014 season.