EverythingDrift: When Did you First Get into Drifting . And how did you meet Fredric.

Steffen Moy: I have always been into drifting, or motorsports overall. About 10 years ago, I used to race a Honda Civic in road racing, and I have been a mechanic for a friend of me that did some rallying. I have always been into cars, mostly RWD, spending so many hours on snowy roads. As drifting became more popular in Norway, I have always been in the scene, ether as a mechanic, judge, etc., but never competed myself. But yeah, once upon a time I helped Fredric tow his drift car, a BMW back to Norway from a drift event in Sweden. We both had the same passion about the sport and I guess it just clicked. The weekend after that he was going to Finland for an event up there, which is a long drive from our hometown. I wanted to help him out, so I joined him. After that we have had so many miles in a van with a trailer and now we are competing in the biggest drift series in the world. I did not expect that 4 – 5 years ago!

END_OF_DOCUMENT_TOKEN_TO_BE_REPLACED

Long Beach, Calif. – July 23, 2011 – Formula DRIFT returned to Evergreen Speedway for Round 5: Throwdown. Daijiro Yoshihara in the Discount Tire / Falken Nissan S13 takes the victory and the lead in the overall Pro Championship points standings. Attendance records were broken as the event reached capacity for the venue.

Round 5: Throwdown reached capacity as fans came in droves to Evergreen Speedway. Attendance was up over 10% from last season continuing the increase in numbers for the Series. Fans were treated to an exciting round of action from the top drivers in the sport.
END_OF_DOCUMENT_TOKEN_TO_BE_REPLACED 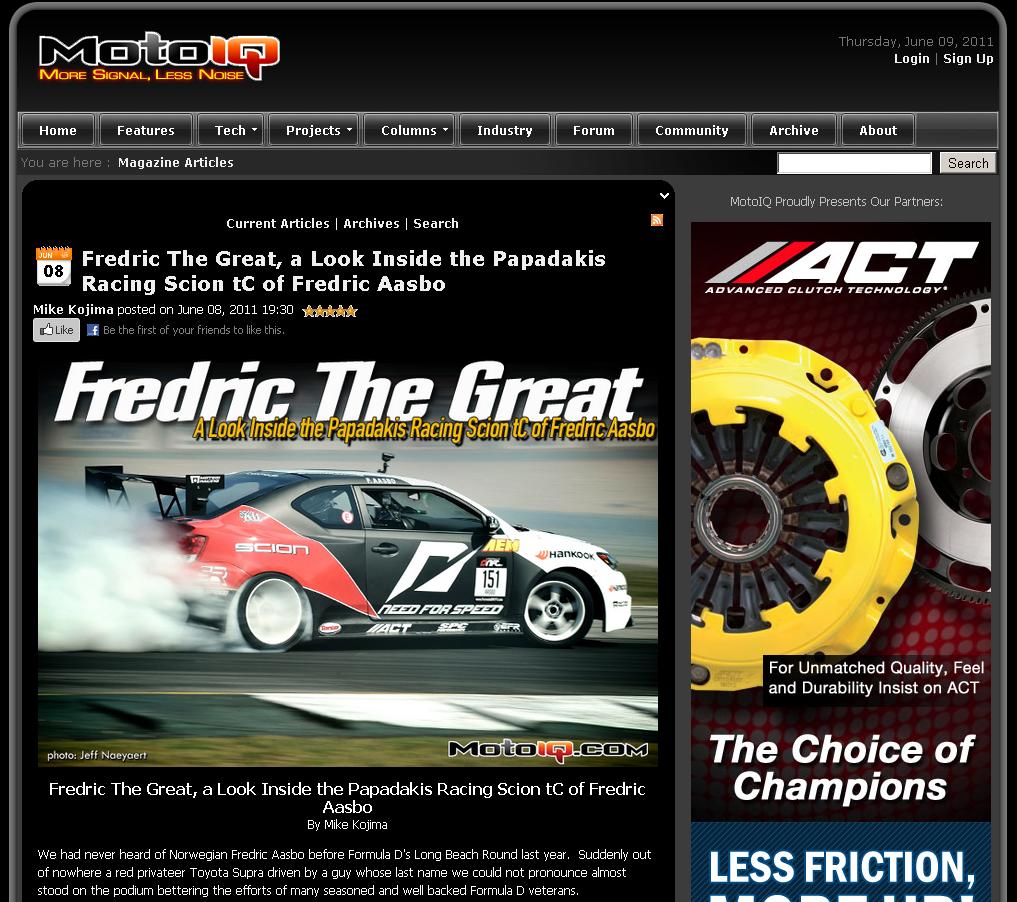 MotoIQ.com just did a great write up on Fredric Assabo and the Papadakis Racing Scion tC.  Wanting to know whats under the hood of the tC and the man that pilots it?  Check out full article by following the link here or clicking the header picture.

When we first debuted Tanner’s tC, the powerplant was yet-to-be-named, although we had heard rumors of the NASCAR powerplant. On the Inside Drift podcast last week and this week in an interview with Scion, Foust confirmed the powerplant, stating that they would be moving away from the turbocharged motors he has become accustomed to in drifting and will be using one of Toyota’s NASCAR V8 powerplants. These motors run 358 cubic inches and put out well over 600 horses to the rear wheels in NASCAR form, although drifting doesn’t have the same restrictions that NASCAR places on their cars. As more information is revealed, we’ll bring it to you first!

On a side note, Tanner will be on Hankook tires for the 2009 season. We expect him to be on either the RS-2 Z212, which has been a hugely-innovative tire for Hankook, or the newly-announced RS-3 Z222 tire which was announced at this year’s SEMA show.

Here is the initial rendering which was released back in October – an updated rendering with the Hankook logos hasn’t been distributed as of yet.