APEX US BLOG has been working on a documentary series called, “Life NonStop”. The series follows the life of the NonStop Tuning drivers through the 2011 Xtreme Drift Circuit and highlights the race cars, as well as the venues and cities that the team has and will visit throughout the season.

Join them this Saturday night, as they kick off the summer with the FIRST episode in the series, “Life NonStop”.

Jeff Jones defeated Dave Briggs for the final spot on the podium when Briggs’ car suffered a suspension failure. For his victory, Marstanovic took home $3,000 in prize money, plus an additional $500 for taking the top qualifier position. Pfeiffer took home $2,200 – $2,000 for second place and $200 for qualifying third – and Jones earned $1,000 for taking the final spot on the podium.

Briggs’ suspension failure was not the only drama of the weekend. XDC Irwindale winner Chelsea DeNofa encountered problems in his BMW M3 and borrowed Yoshie Shumaya’s Nissan to qualify and compete, while Texas’ Nate Hamilton suffered a blown engine and was unable to qualify at all.

Marstanovic blazed a trail through the top-16, defeating Chris Soehren, Joe Haven, and then Jones to face Pfeiffer in the final. Pfeiffer first defeated Kelvin Arreola, standout rookie Corey Hosford – who in only his first drifting event, qualified sixth and made it to the Great Eight – and then Briggs to meet Marstanovic in the final.

“XDC Arizona was an amazing event,” said Marstanovic afterwards. “Great venue, great fans, and awesome drivers! I’m really excited with what XDC is doing this year, and can’t wait to get to more events and to have some more fun!”

Marstanovic now leads the XDC Western Division Points standings, ahead of Briggs and DeNofa with two of the three rounds completed. XDC’s next event will be the kickoff of the XDC Eastern Division championship, on May 15th at the Central Florida Racing Complex in Orlando, Florida.

The large crowd at XDC Phoenix was treated not only to a competitive top-16 tandem battle, but to the REMIX Car Show and the Power 98.3 Spring Concert featuring Def Jam recording artists Jerimeh and Mann. XDC’s second event in Arizona was an unqualified success and the series looks forward to returning for a third time in 2012. END_OF_DOCUMENT_TOKEN_TO_BE_REPLACED

Episode one, covering round one of the new season in the XDC circuit in Irwindale, CA.
Nate works on getting back into competitive drifting, focuses on the new features on the car and talks about the next stop. 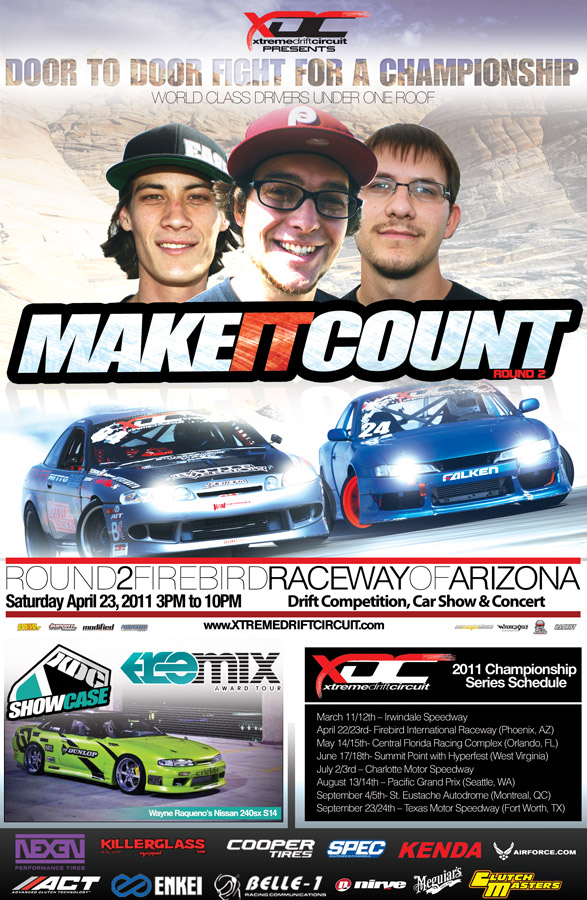 The final episode of the season brings us to the Finals in Arizona. Here Nate battles it out against the top drivers of the season to see who takes first for the circuit this year.

Xtreme Drift Circuit Round 1 has just passed us by and congratulations again to Chelsea DeNofa.  Pictured above on a run through the inside apex is Chelsa doing his thing.  Check out the full gallery located here.