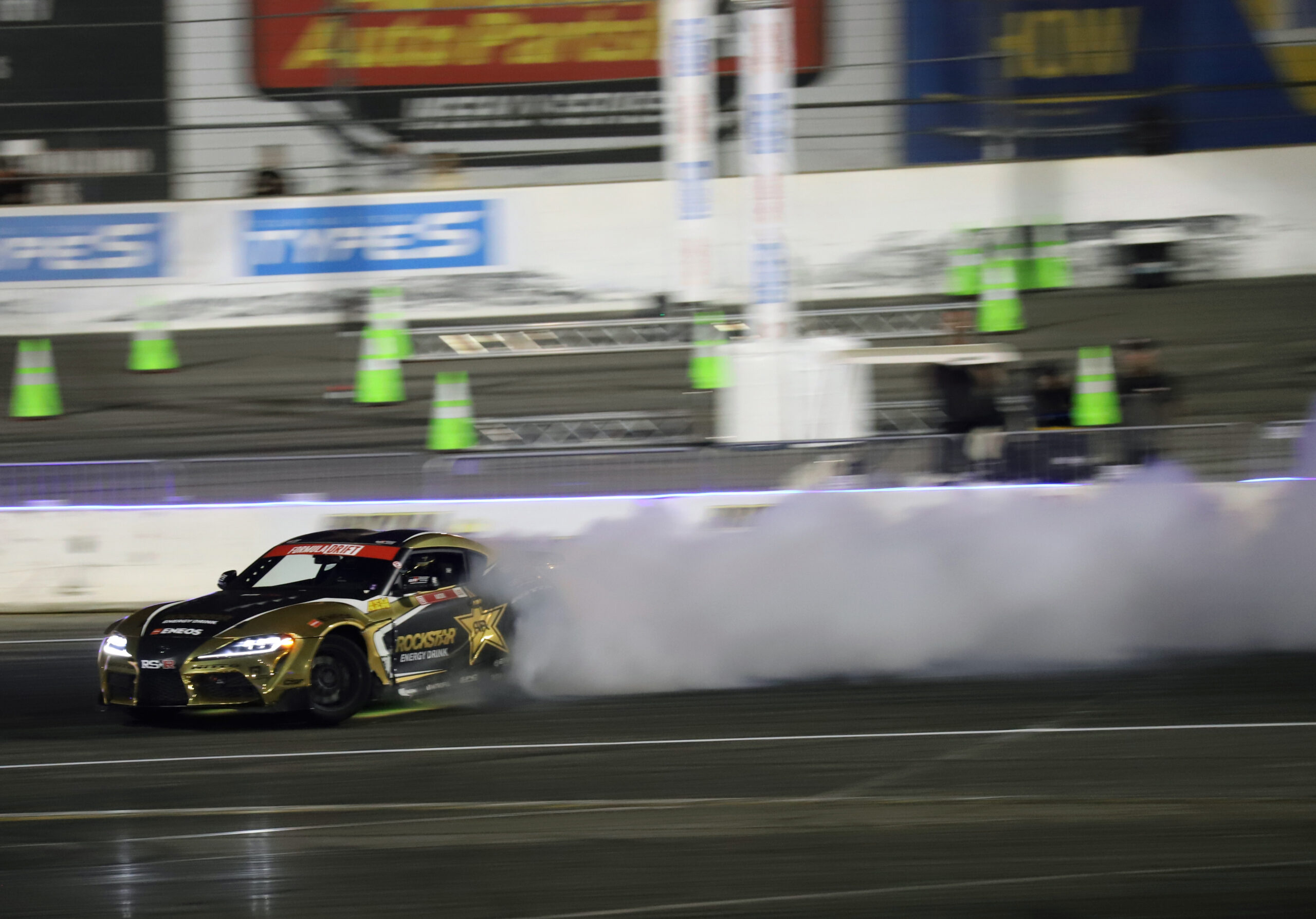 END_OF_DOCUMENT_TOKEN_TO_BE_REPLACED

For the first time in the 19-year history of the Formula DRIFT series, Utah Motorsports Campus in Grantsville, UT hosted both the FD PRO Championship Round 7: Type S Elevated presented by Autozone as well as the Final Round of the Link ECU PROSPEC Championship.

As the fastest course on the 2022 schedule that saw the drivers initiating into the first turn at more than 100mph, the track presented a unique challenge. Teams would need to find enough grip to accelerate hard into the first turn, but not too much that the car wouldn’t transition smoothly. With three Outside Zones and two Inside Clips, the drivers also needed precision to hit the marks and advance to the final rounds.

The pressure on the Link ECU PROSPEC drivers was immense. With 31 points separating the top six positions and 14 drivers having a mathematical chance off winning the 2022 Championship title, the FCP Euro qualifying session would be critical. Not only would it allocate valuable points to the top three positions but also determine the competition match-ups and, as it transpired, would provide the top three qualifiers with bye runs through the Top 32 competition heats.

With names like Thorne, Brutskiy and Bogovich stealing the headlines in the first three rounds, Kasey Kohl (USA) made a surprise appearance at the top of the PROSPEC qualifying table. Scoring 86 points in his Mspek Performance Nissan S14.9, the 2022 series Rookie would be the cat among the pigeons as he not only claimed three Championship points but also a bye run. Sitting 11th overall and 84 points from the title lead, he’d be an unlikely Champion but was undoubtedly keen to make an impact in the final round.

In second place, Andy Hateley (USA) proved he’s still in contention in the Hateley Motorsports BMW E46 after winning the opening round in Orlando. Thirty-one points from the PROSPEC lead, Hateley had a genuine chance to claim the 2022 title, as did third-placed Jagger, who arrived in Utah fourth overall and 22 points from the top.

END_OF_DOCUMENT_TOKEN_TO_BE_REPLACED

RESULTS FROM FD PRO ROUND 5

RESULTS FROM FD PROSPEC ROUND 3

END_OF_DOCUMENT_TOKEN_TO_BE_REPLACED

A wet course and dense fog during the 4,724ft climb to the finish line made the 100th running of the Pikes Peak International Hill Climb especially challenging for drivers. Yet Japanese champion Daijiro Yoshihara was able to master the 156 turns on his way to the 14,115ft peak. He set a time of 11:06.205 in the Turn 14 Distribution / Yokohama Tire / ENEOS / Evasive Motorsports Tesla Model 3 Pikes Peak, which placed him ninth overall. As the fastest EV, he was second in the Exhibition Class because PPIHC currently lacks dedicated classes for electric vehicles. Winner of the class was a production 2022 Porsche 911 Turbo S Lightweight.

This year’s event was only the second outing for the Tesla Model 3 prepared by Evasive Motorsports in Cerritos, CA. Despite its promising form in practice and qualifying, a mechanical issue prematurely curtailed its 2021 attempt. During the interim, the team worked hard to understand the car and fine-tune both its aerodynamic and cooling efficiency (see Tech Spec below), making few additions to the race-prepped chassis other than switching to Yokohama racing tires for 2022.

“It’s been an incredible week with no issues,” Dai Yoshihara told us after his successful run. “Practice and qualifying went great, which almost seemed too good to be true. And then coming into today [Sunday] the weather became a big factor with the rain and fog. However, we felt it could give us a real chance because our weakness is the power of the car but the Yokohama wet tires work really well. Effectivley, the rain erased the advantage of the other cars and I think we got a really good result because of it, which I’m obviously delighted about.”

END_OF_DOCUMENT_TOKEN_TO_BE_REPLACED

Evasive Motorsports Tesla will again be driven by Dai Yoshihara.

The 100th running of the 2022 Pikes Peak International Hill Climb on June 26 will mark the fourth year ENEOS has supported the race efforts of Evasive Motorsports and driver Daijiro Yoshihara.

ENEOS is Japan’s largest oil company and supplier of motor oil and transmission fluids to the majority of Asian vehicle manufacturers. Through its relationship with the car makers, it introduced an EV Fluid Series last year, which is designed to optimize the efficiency and performance of electric vehicles. And while it might appear unusual for an oil company established in 1888 to compete in the “Race to the Clouds” with a Tesla, it reflects the transition the company is making as transportation evolves.

In 2019 and 2020, Evasive Motorsports entered an ENEOS-supported 900-horsepower turbocharged Toyota 86 in the Pikes Peak International Hill Climb (PPIHC), which won the Unlimited Class at the second time of asking. However, the team made a radical shift in 2021, abandoning its proven race winner for a Tesla Model 3 Performance.

Mike Chang at Evasive Motorsports in Cerritos, CA could see the market changing and knew it was time to embrace the future. But for a racing team and vehicle preparation specialist like Evasive, the Tesla Model 3 presented a number of challenges. In the past, a modified Toyota 2JZ turbo engine allowed them to compensate for the reduced air pressure on the climb to the 14,115ft finish line at the Pikes Peak hill climb. Unable to modify the electric motors in the Turn 14 Distribution / Yokohama Tire / ENEOS / Evasive Motorsports Tesla Model 3 Pikes Peak race car, the team needed to make other changes to prepare for the 12.42-mile sprint, which climbs 4724 feet. With the “Race to the Clouds” incorporating 156 turns, emphasis was placed on the chassis to maintain speed through the corners.

END_OF_DOCUMENT_TOKEN_TO_BE_REPLACED

ENGLISHTOWN, NJ – As the Formula Drift season reaches midway, Team Falken’s Matt Field has assumed the top rung in the points championship on the strength of his fourth place finish following Round 4 at “The Gauntlet,” held at Old Bridge Township Raceway Park this past weekend. In addition, Falken Tires is at the top of the leader board in the Tire Cup Championship for 2022.

The fourth sold-out event of the season saw 36 drivers attempt to qualify for 32 positions. Nevertheless, Team Falken did well in qualifying with Dylan Hughes, fresh off his win in Round 3 at Orlando, in 3rd; Justin Pawlak, 6th; Aurimas “Odi” Bakchis, 9th; and Field in 18th. All drivers advanced to the Top 16 but only Field moved to the Top 4 where he finished 4th.

“The fact that this weekend’s top two spots were claimed by independent drivers who had never been to the Formula D Pro podium before speaks volumes about how every team has advanced by mid-season,” exclaimed Gerald Alvarado, Falken’s Supervisor, Passenger Car Motorsports and Events. “But, as always, it’s about points. How many you acquire at each event; how many you walk away with at the end of the year. Right now, with Matt, we’re sitting on top, and that’s where we intend to stay.”

“Despite qualifying 18th, my car performed well during the runs and was hooked to the pavement with our Falken Azenis tires,” added Field. “Old Bridge Township Raceway Park is an amazing track; it’s a purpose-built drift arena, the first of its kind in the U.S., and the figure-8 layout is amazing. It made for a lot of fast corners and close action. We suffered some damage as a result, but continued. And everyone benefitted from the great crowds cheering us on the whole weekend.”