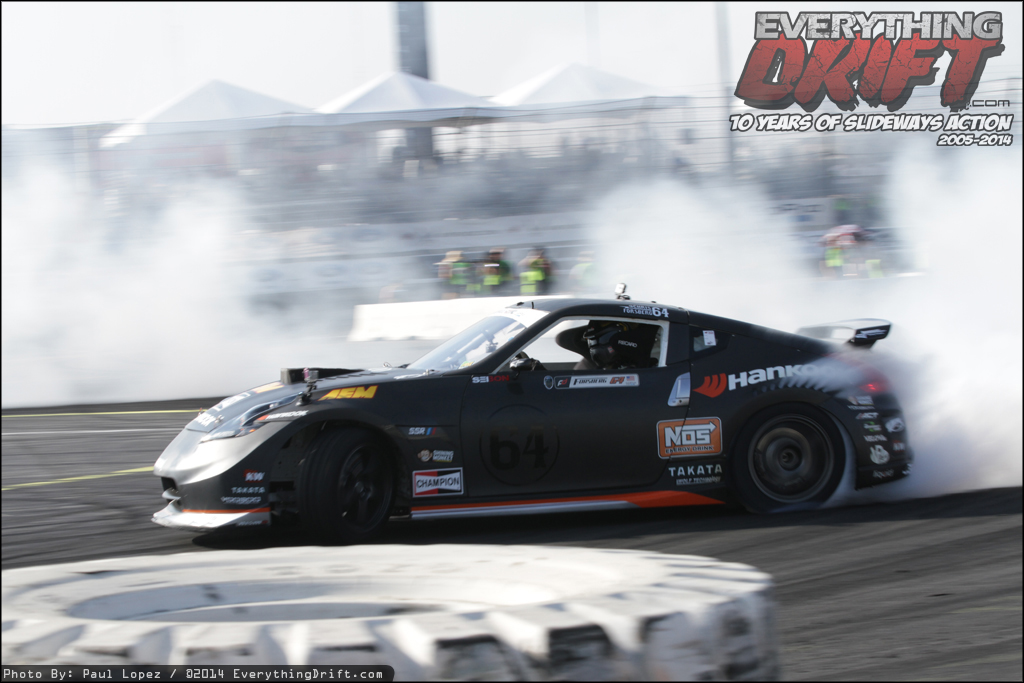 The tension couldn’t have been any higher at Irwindale Speedway when Formula Drift came to town for a gripping season finale. Things are still settling in my mind, and like any die-hard fan that was there over the weekend, the memories I took away will stay with me for a lifetime.

Let’s start off by giving a massive congratulations to title winner Chris ‘The Force’ Forsberg. It took him all 7 rounds to clinch the title, but what a journey he has been on. Unparalleled consistency, some of the best driving we’ve seen from him, and a show that made 2014 one of the best seasons yet. Thank you, and job well done Mr. Forsberg! 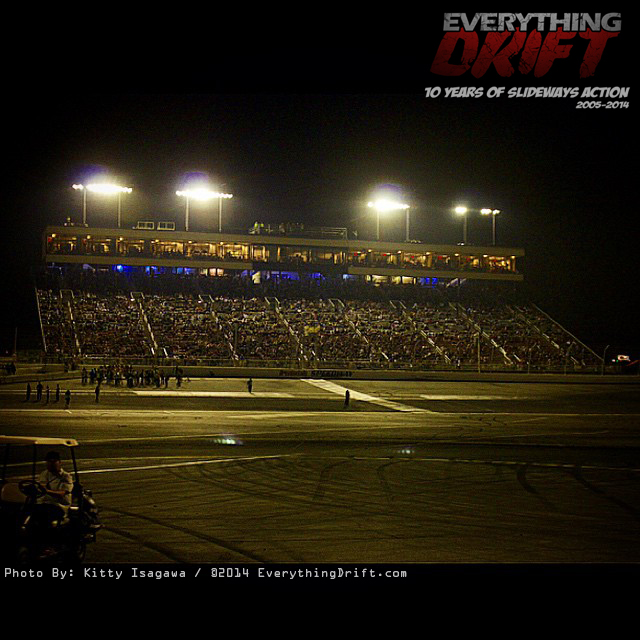 I was trackside at Irwindale watching history unfold, and having been to every round this year, I would say without a doubt that this was the most special. There was barely a second to blink, let alone breathe, as I was literally screaming from the roof top as the battle went down to the very last seconds.

The smell of the rubber, the roaring scream of the engines, and sideways action that could make the unconditioned dizzy, this event embodied everything that Formula Drift means to me. I was literally crying from excitement as I tried to find a way to let out the excitement within, and who knows, if I didn’t I may well have just burst! 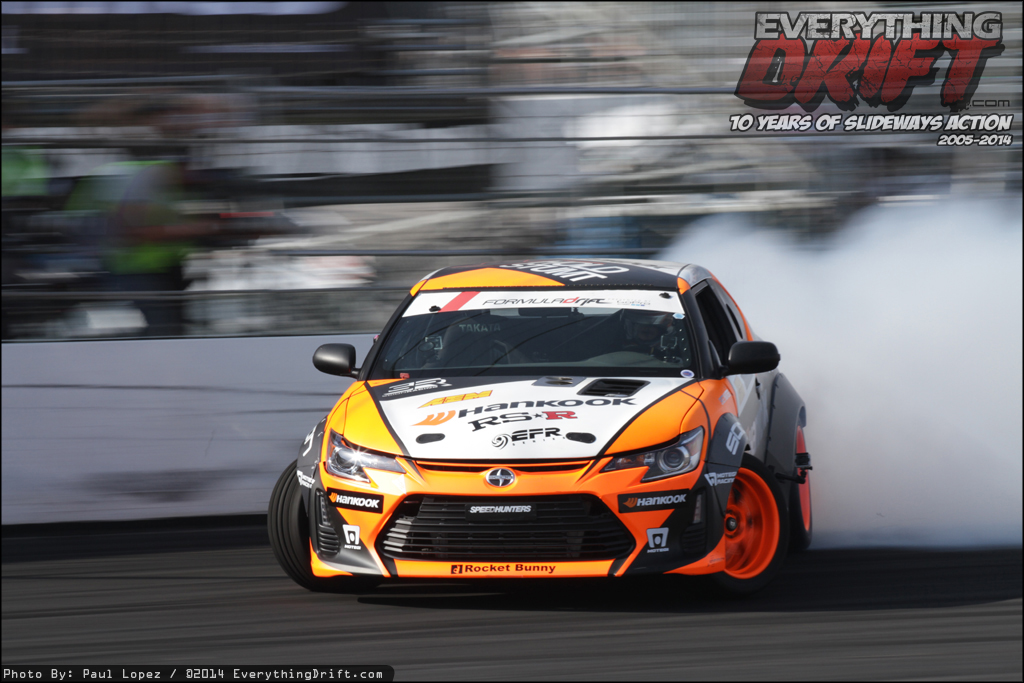 Regardless of anything else, this weekend was all about the Final Fight for the title, and as the competition knuckled down to the top 4 drivers you could feel the nervous anticipation in the crowd. The atmosphere went crazy when Fredric Aasbo knocked Chris Forsberg out for podium running, and this meant that all Chris could do was sit on the sidelines and wait. Would he be champion? Aasbo would have to take 1st place to take the title, but in the sequence of events that followed, luck stayed on Chris’ side. 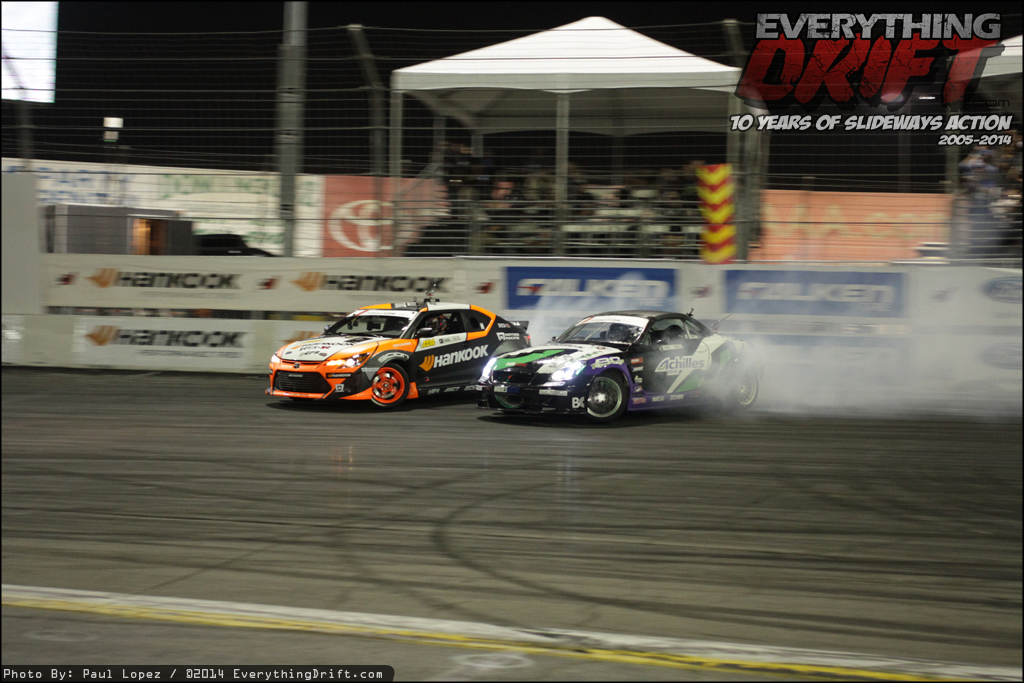 It literally went down to the last minutes, and when Daigo Saito took the top step of the podium at Irwindale it meant only one thing, ‘The Force’ had taken the title for the season, with Fredric having to settle for a well-deserved and well fought 2nd place, just ahead of Vaughn Gittin Jr. on 3rd in points. 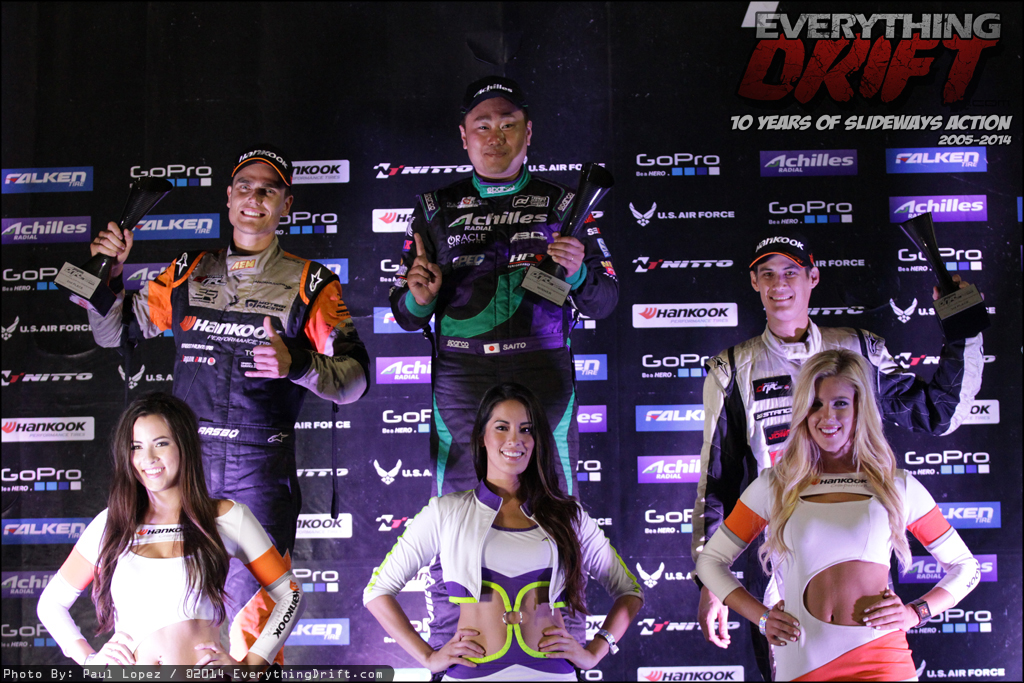 I’vebeen saying all season, it’s never over until it’s over, and round 7 proved my point beyond any doubt. 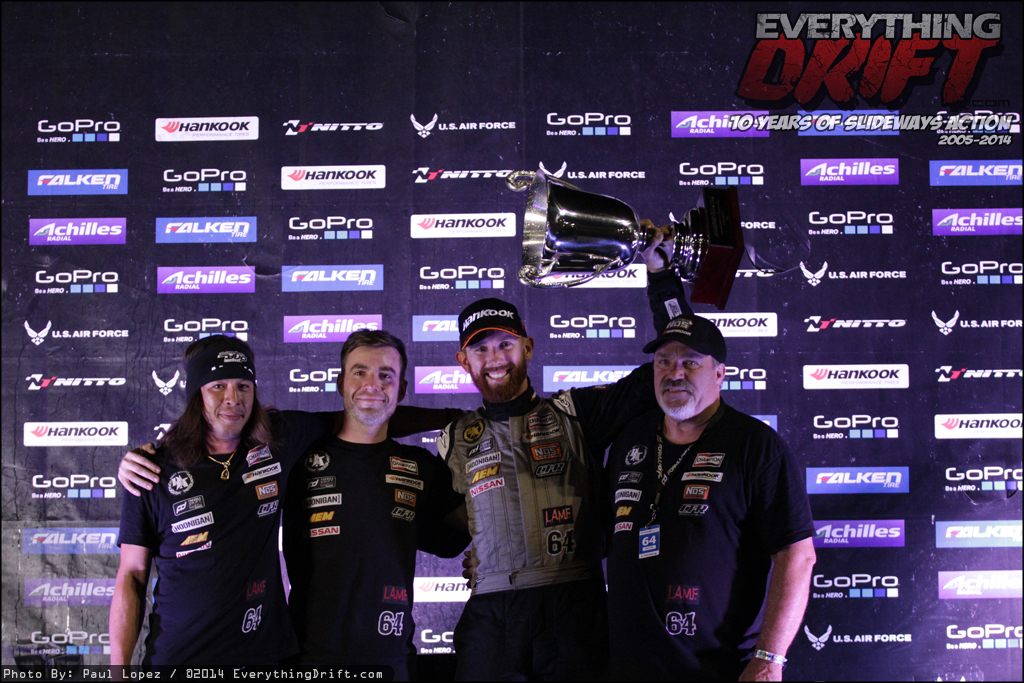 I still can’t get over what a phenomenal season 2014 has been. Each weekend has been the best event I’ve been to so far, and that momentum was carried through all the way to Irwindale, making this one of the best Formula Drift championship I’ve had the pleasure of witnessing. This year I was able to get even closer to the action, with a VIP Experience, Media Credentials and having the privilege of joining Formula Drift at the Drivers Award Banquet. Being able to share this moment with everyone there has definitely been an ultimate highlight for me as a fan that is so head over hills for Formula Drift. 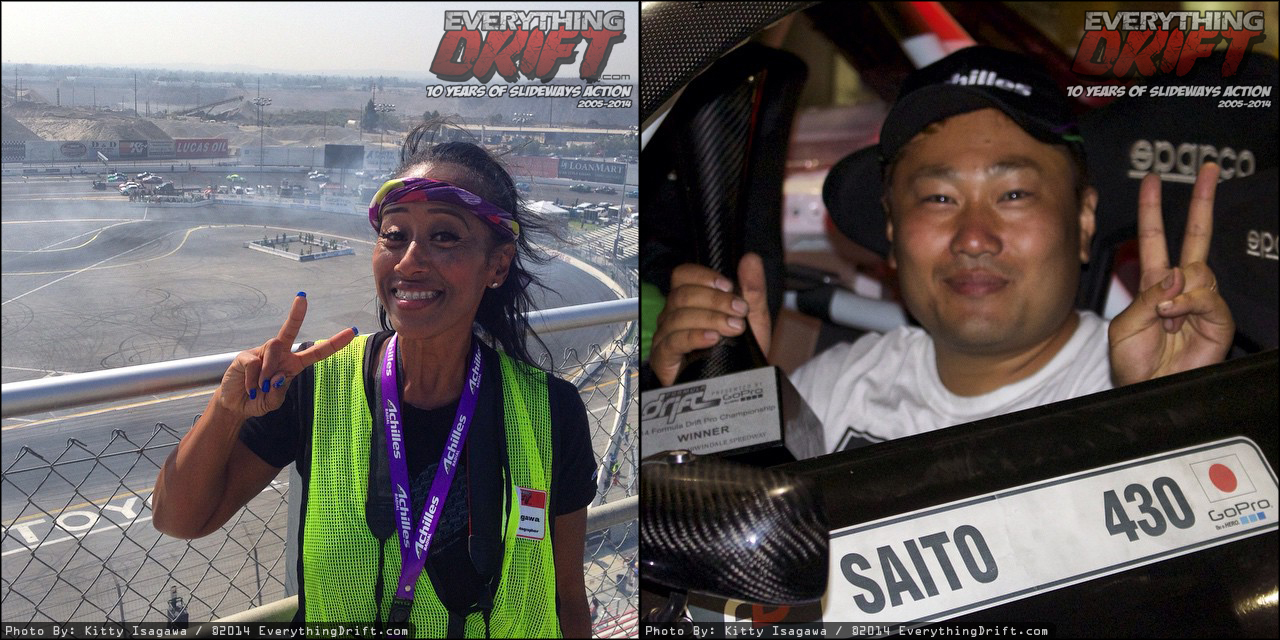 2014 has also been a fantastic year for the Formula Drift Pro 2 Series. The Pro2 drivers have been giving it their all and I have enjoyed watching them do battle. Watching Pro2 can be a breath of fresh air, and it’s really something to know that you’re watching tomorrow’s talent develop. Big congratulations to Dan Savage, Geoff Stoneback, and Jeremy Lowe who took the top three places in the Pro2 Series. These are definitely drivers to keep an eye on next year! 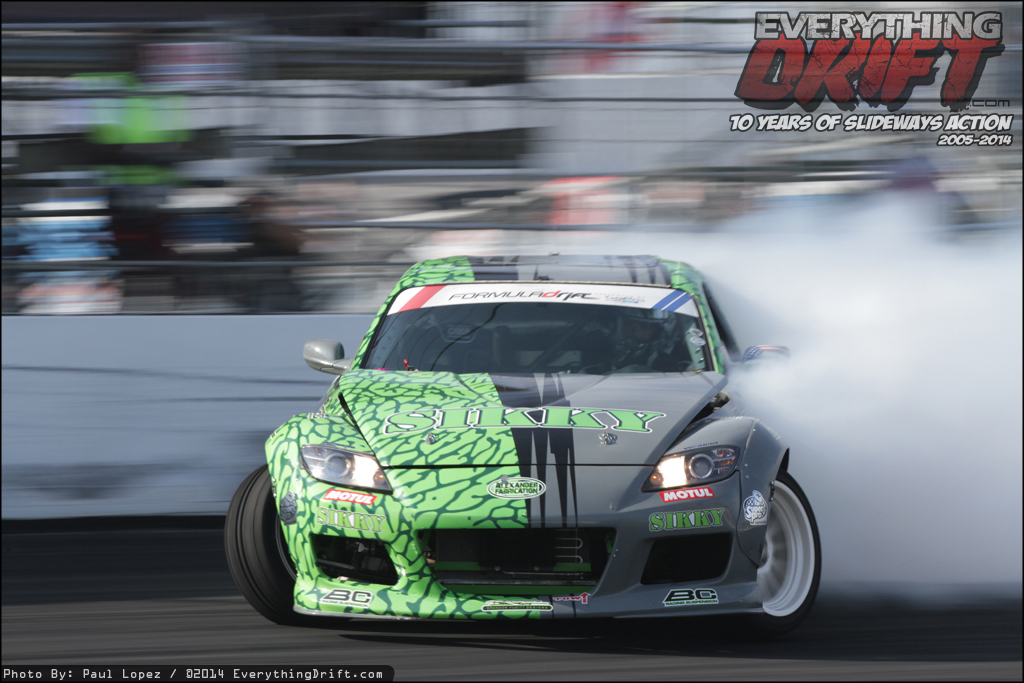 As we close out another season of Formula Drift, as the drivers and teams take a break before they start prepping for next year’s competition. I’m more pumped than ever for 2015, and if the past year has been anything to go by then it looks like the next is set to send me even further over the edge of my seat. 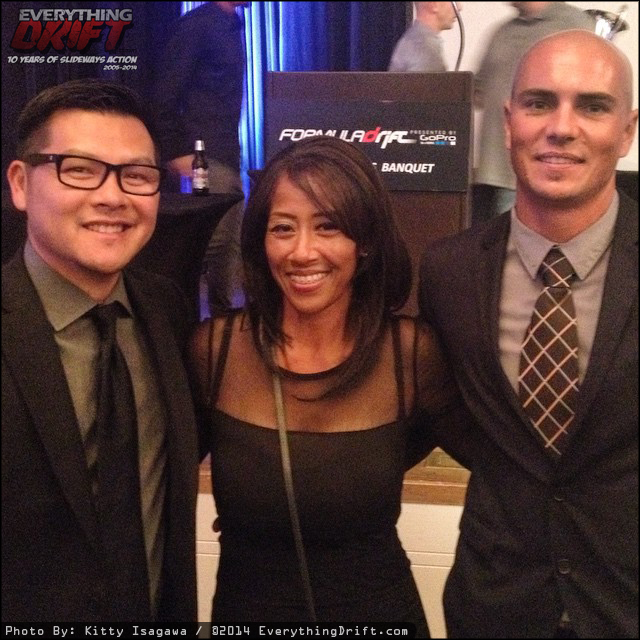 You all know how I love Formula Drift, so I hope to see you at Long Beach next year when the rubber hits the tarmac!

3 thoughts on “The Force Has the Winning Formula”