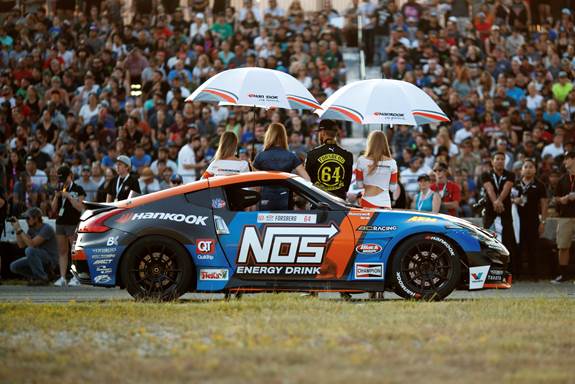 Nashville, Tenn. (December 4, 2017) – Hankook Tire is marking the end of its 11-year Formula Drift sponsorship and reflecting on the success its sponsorship achieved for the circuit, the company and its drivers.

The tire company maintained a robust presence in the sport for more than a decade after entering competition full-time in 2007. Hankook scored event victories during the early years, and a recent run of success resulted in three consecutive series championships from 2014-2016.

Hankook Competition Driver Chris Forsberg’s 2014 and 2016 titles sandwiched Fredric Aasbo’s championship in 2015, with the Formula Drift Tire Cup going to Hankook as well in 2014 and 2015. Additionally, Kevin Lawrence won the 2017 Formula Drift Pro 2 Championship, coming from behind to take the title at the final race at Texas Motor Speedway.

“It is impossible to summarize 11 great seasons on track, but when you look at the championships, numerous wins and podium finishes, Hankook couldn’t be prouder of our time with Formula Drift,” said Hankook Motorsports Marketing Manager Robert Dole. “We’ve shared many successes together, including the overall accomplishment of helping the sport and Hankook grow hand-in-hand. Thank you to Formula Drift, all our drivers, the dedicated FD fans, our entire dealer network and everyone who has supported this effort for over a decade and made it a successful partnership.”

“Hankook Tire’s contribution to the series and the sport is invaluable, proven by its results over the last 11 seasons,” said Formula Drift President Jim Liaw. “We wish Hankook all the best in its future motorsports marketing efforts and will continue to grow the series as we prepare for our 15th-anniversary season.”

Of Hankook Tire’s deep roster of successful drivers, Chris Forsberg is arguably the most decorated and has raced with the brand for seven seasons. In addition to the 2014 and 2016 titles with Hankook, Forsberg took home the 2009 championship. He competed in every Formula Drift event since 2004.

“I cannot thank Hankook Tire enough for its support over the years,” Forsberg said. “Together we won championships, tire manufacturer championships and multiple podiums during our most successful years in Formula Drift, and the company’s commitment to performance was an integral part of my program.”

Hankook extends its thanks to Formula Drift, its drivers and all parties who helped shape the success of the relationship.