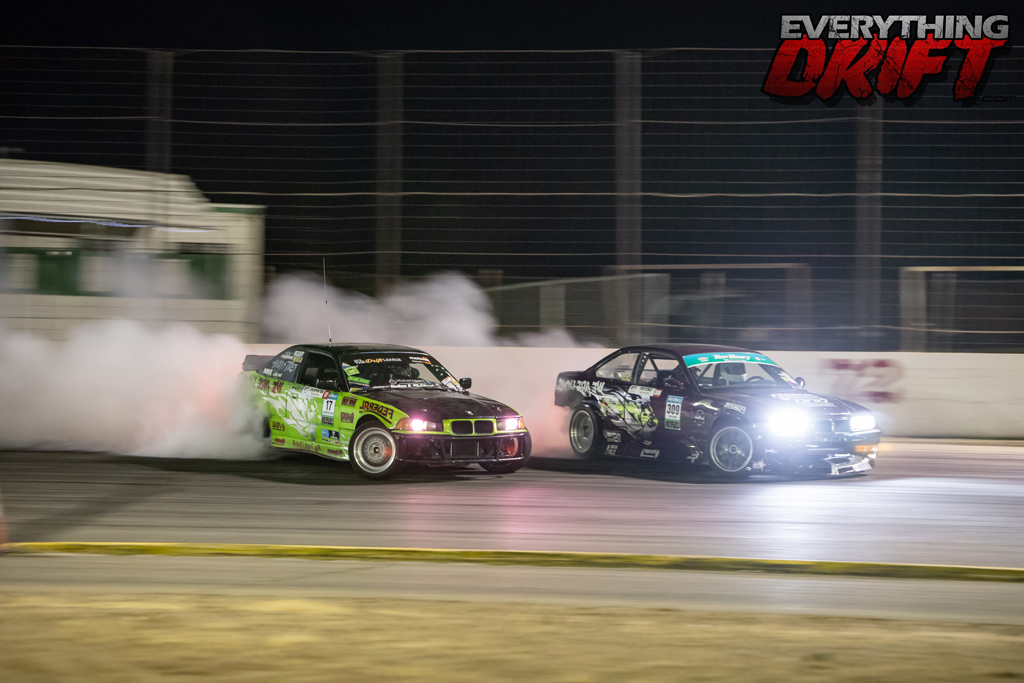 As we come to a close to the 2018 TopDrift series, we are introduced to three drivers who earned their Formula D Pro 2-License. TopDrift is a four round series held by JustDrift and goes based on a points system similar to Formula D. The main crucial judging points are speed, line, angle and style. Depending on where you place in each round, a certain amount of points will be added. At the end of round 4, all the points are added and only the top three will receive their Formula D Pro 2-License.

TopDrift round 4 was held at Speedway (AKA Oval) at Willows Spring International Speedway in Rosamond, CA.  In order to beat the 108 degrees heat, the event was held at night. The track measures at ¼ miles with walls all around the outer track and small paved infield section.  This track is known to destroy any car the comes too close to the wall and may end their weekend. 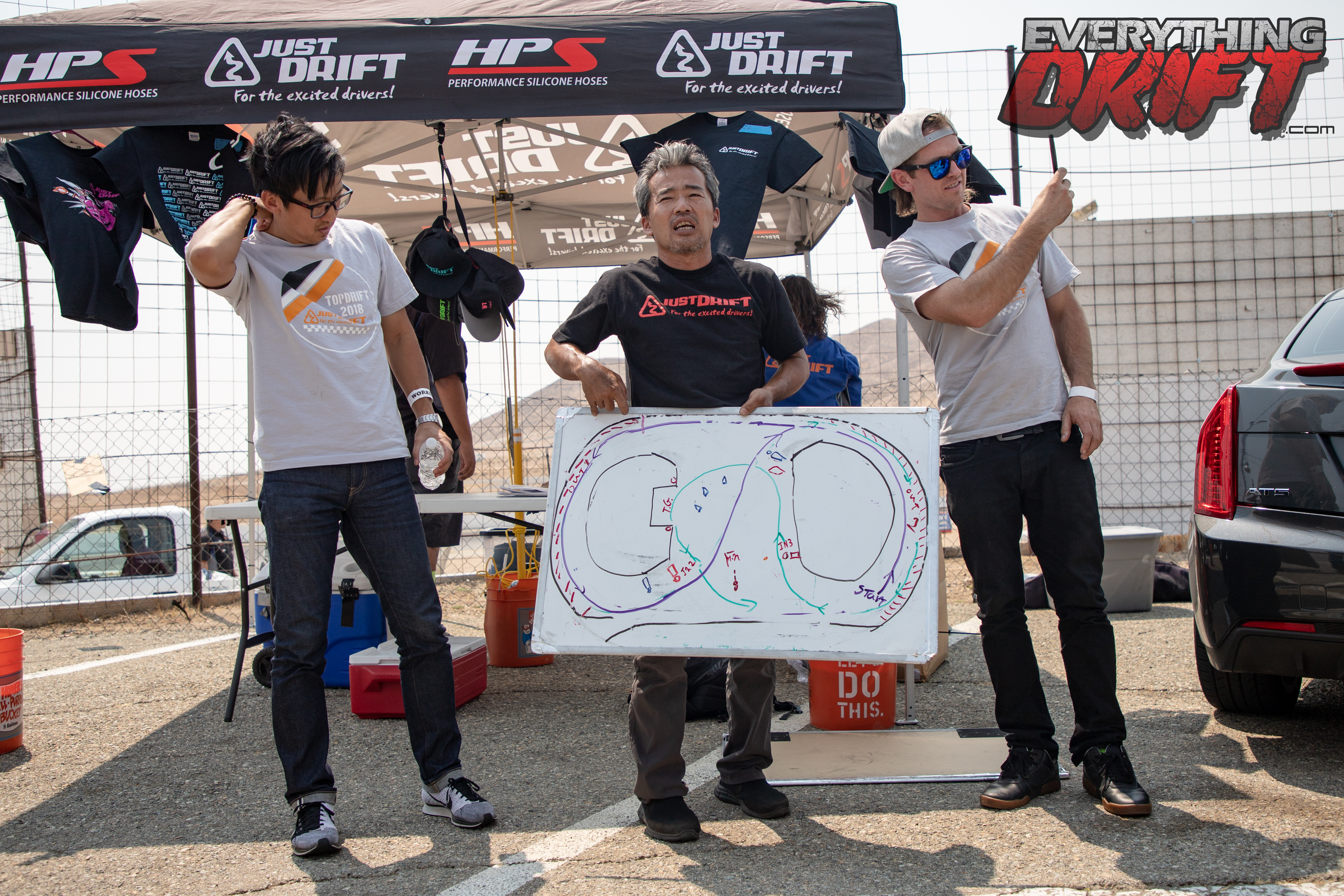 We had a few close calls from parts breaking down to hitting the wall. Daryl Priyono (#309), running a BMW E36 with a LS engine encountered a transmission break down during his practice run on day one. He managed to run for 30 minutes before his TR-6060 transmission called it quits. Daryl and his team manage to borrow a T-56 transmission just to compete but cost them to be up all night. Daryl would not be the only victim to encounter problems before qualifying. 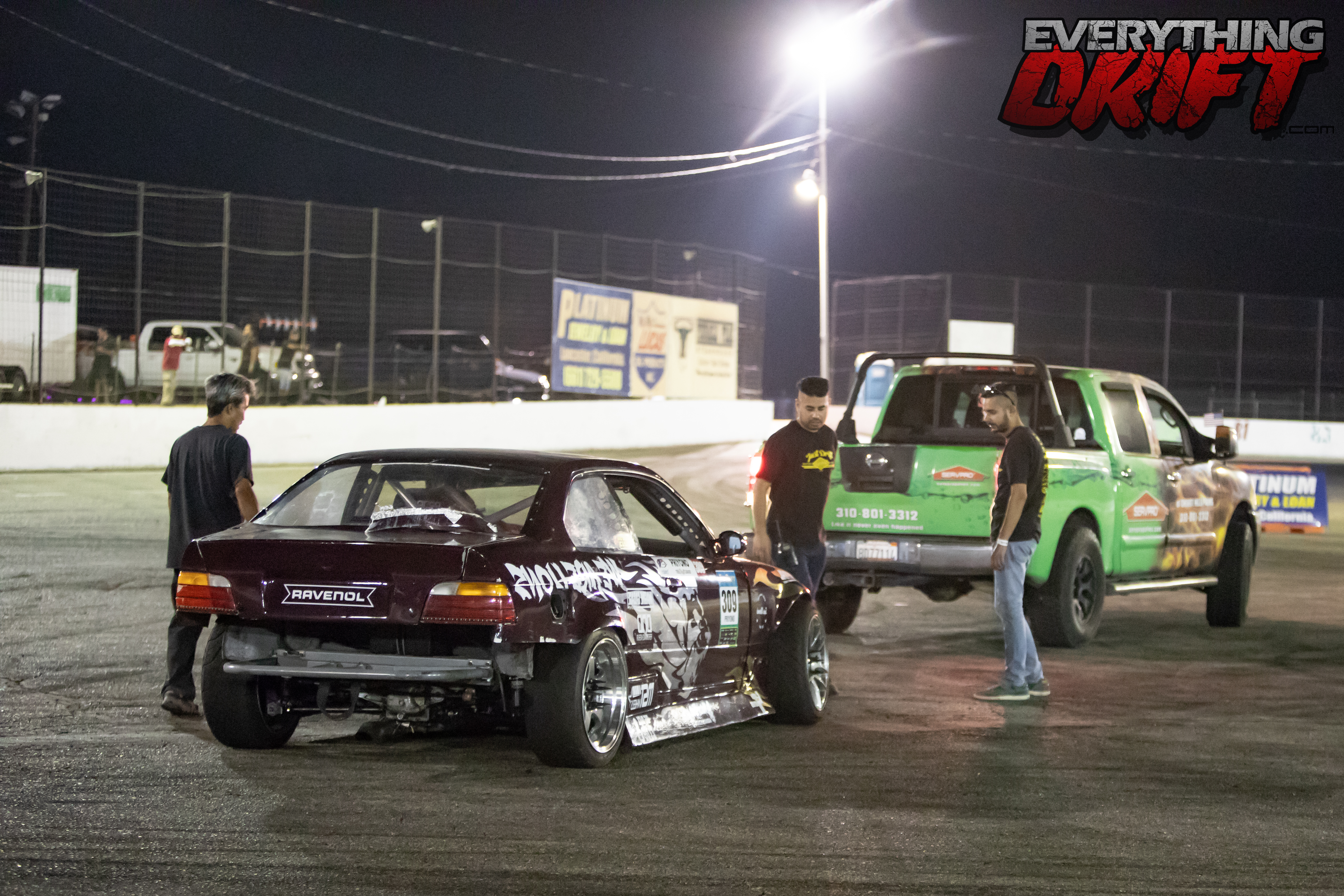 Joe Pasco (#94), driving a BMW E36 with a 2jz swap will also encounter some issue. During his practice run, he gave the wall some love and ended up with a rear make over. Joe was no injured during the crash, but the BMW rear end did not look promising at the time of the crash. Surprisingly, his car stilled run for while until his transmission decided to lock up and called it a night too soon. 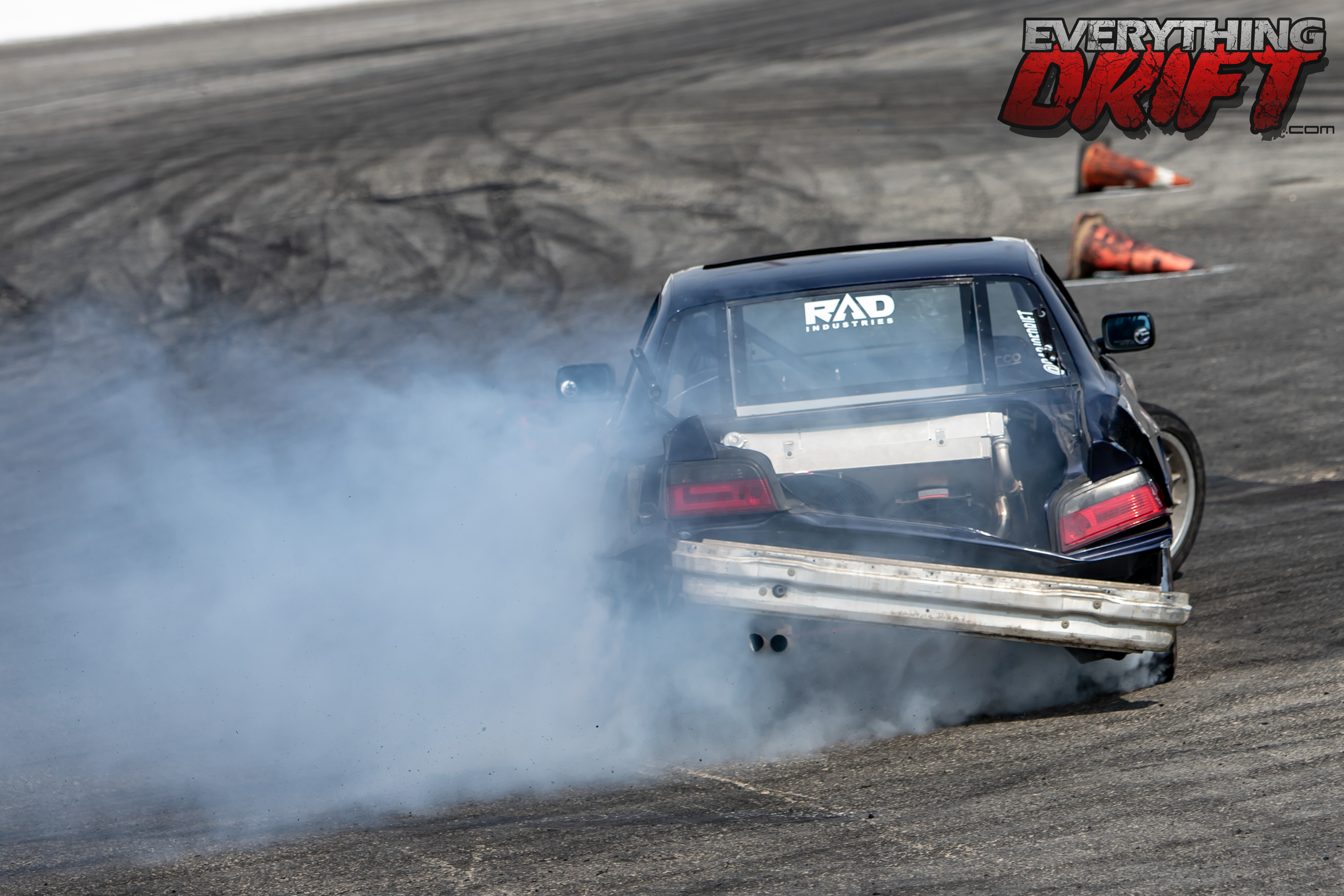 They would not be the only ones to call it a day too soon, by the time it was qualifying; only 14 drivers have made it. That is 2 shy away from having a Top 16, which is normally the case.  Alex Grimm earned first, and Brian Nimmo earned second in qualify. Both received a bye run since only 14 drivers made it. You can check out the qualifying brackets below. 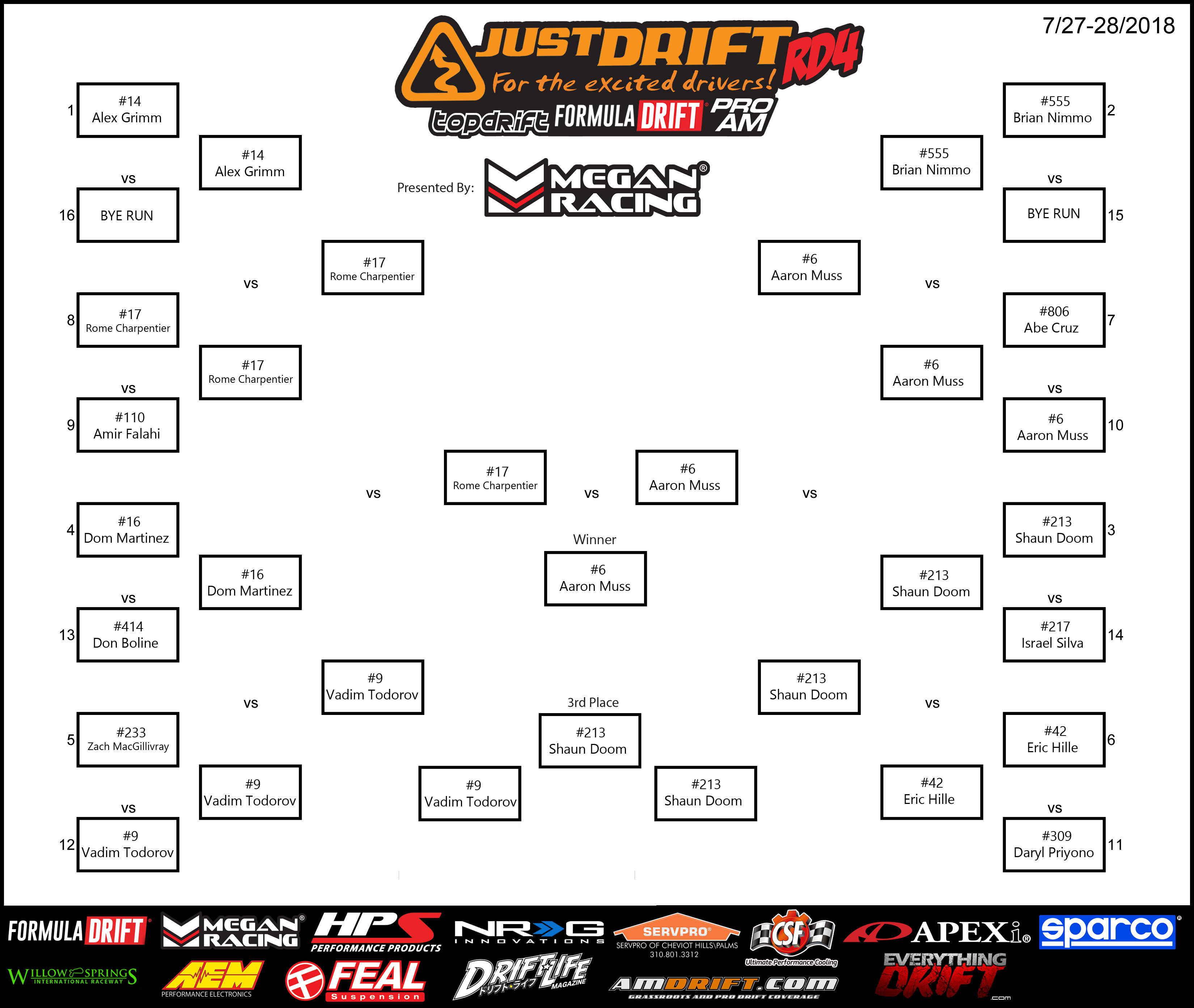 Aaron Muss, a U.S.A. pro snowboard for the 2018 Winter Olympic, running in a BMW E46 and earned first place in round 4. Rome Charpentier, in his BMW E36 earned second and Shaun Doom, in his Nissan 240SX earned third. After the celebration, we immediately moved on to the top three overalls of the series.

Only the top three of the series will receive their Formula D Pro 2-License which will open more opportunity. The winners of the 2018 TopDrift series championship are, Rome Charpentier for first, Dominic Martinez for second and Shaun Doom for third place. 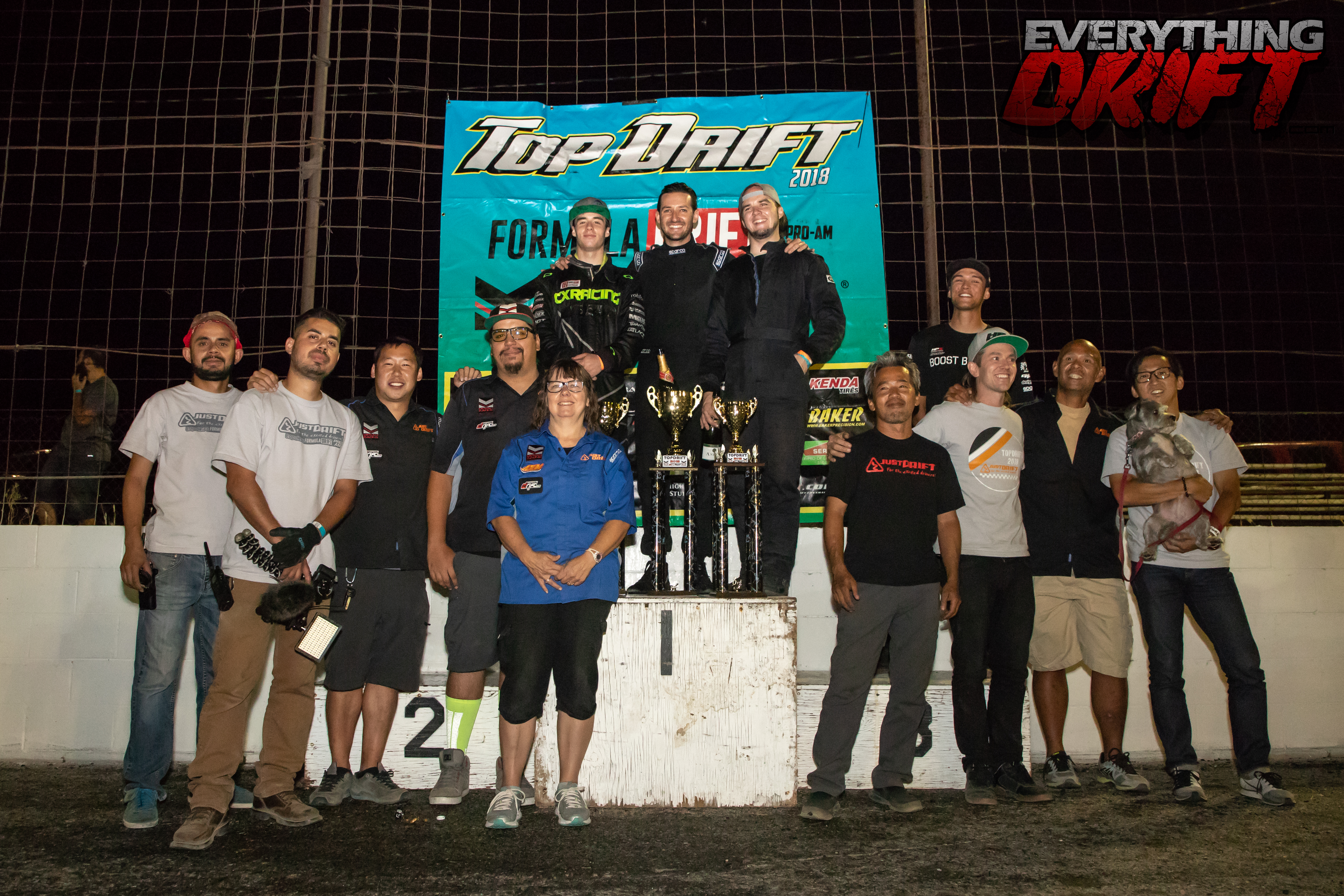 It has been an amazing experience and we wish them the best in their next journey. We cannot wait to see who will become the next TopDrift championship for 2019. In the meantime, JustDrift has announced that they will be holding ASB 2018 on November 10 and 11. They will have both Horse Thief Mile and Streets at Willow Spring International Speedway. For more information, make sure to check JustDrift website  ( http://justdrift.com ).

Photos and write up by: Juan Estrada 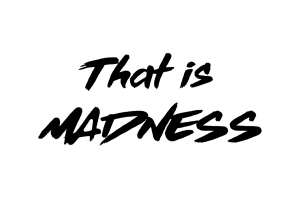