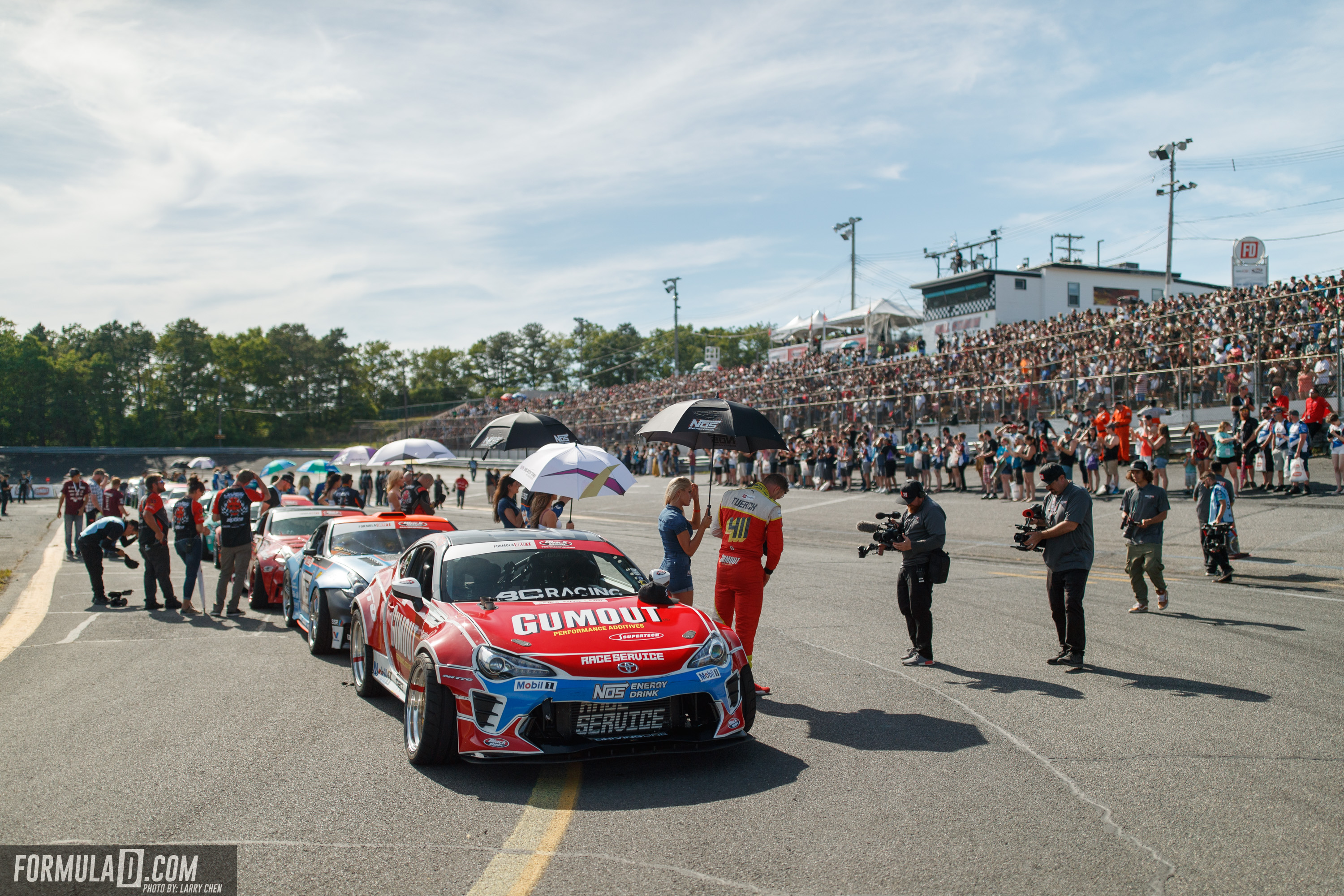 Beautiful sunny skies and mild temperatures greeted the Formula DRIFT Black Magic PRO Championship teams as they arrived at Wall Stadium Speedway in New Jersey for the Advance Auto Parts Gauntlet presented by Black Magic. With a good mix of drivers claiming podiums at the early rounds and some of last year’s favorites yet to shine, a sell-out crowd filled the grandstands around the banked track in preparation for another nail-biter. 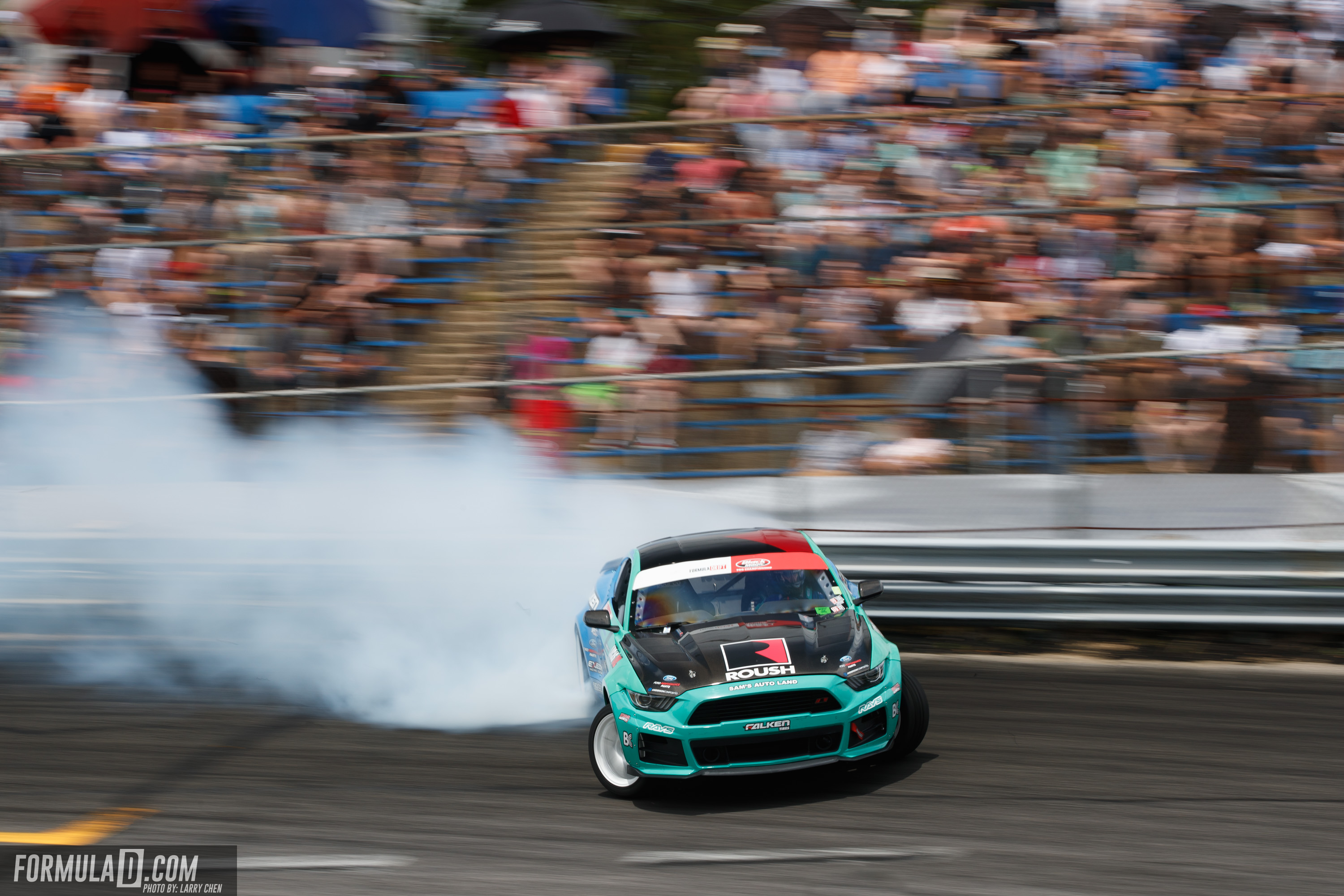 The excitement was soon turned up to 11 as another intense Friday qualifying session would see almost 60% of the 33 competitors score 90 points or better. It continues to be a real challenge for the judges to separate the leading drivers but top of the charts was Justin “JTP” Pawlak (USA) who was awarded a perfect “100” on his first run. Driving with his usual aggression and precision, Pawlak flawlessly placed his Roush Performance / Falken Tire Ford Mustang on the New Jersey course. This is only the second time a driver has achieved 100 points, and the first time since Tanner Foust set the standard in 2006. 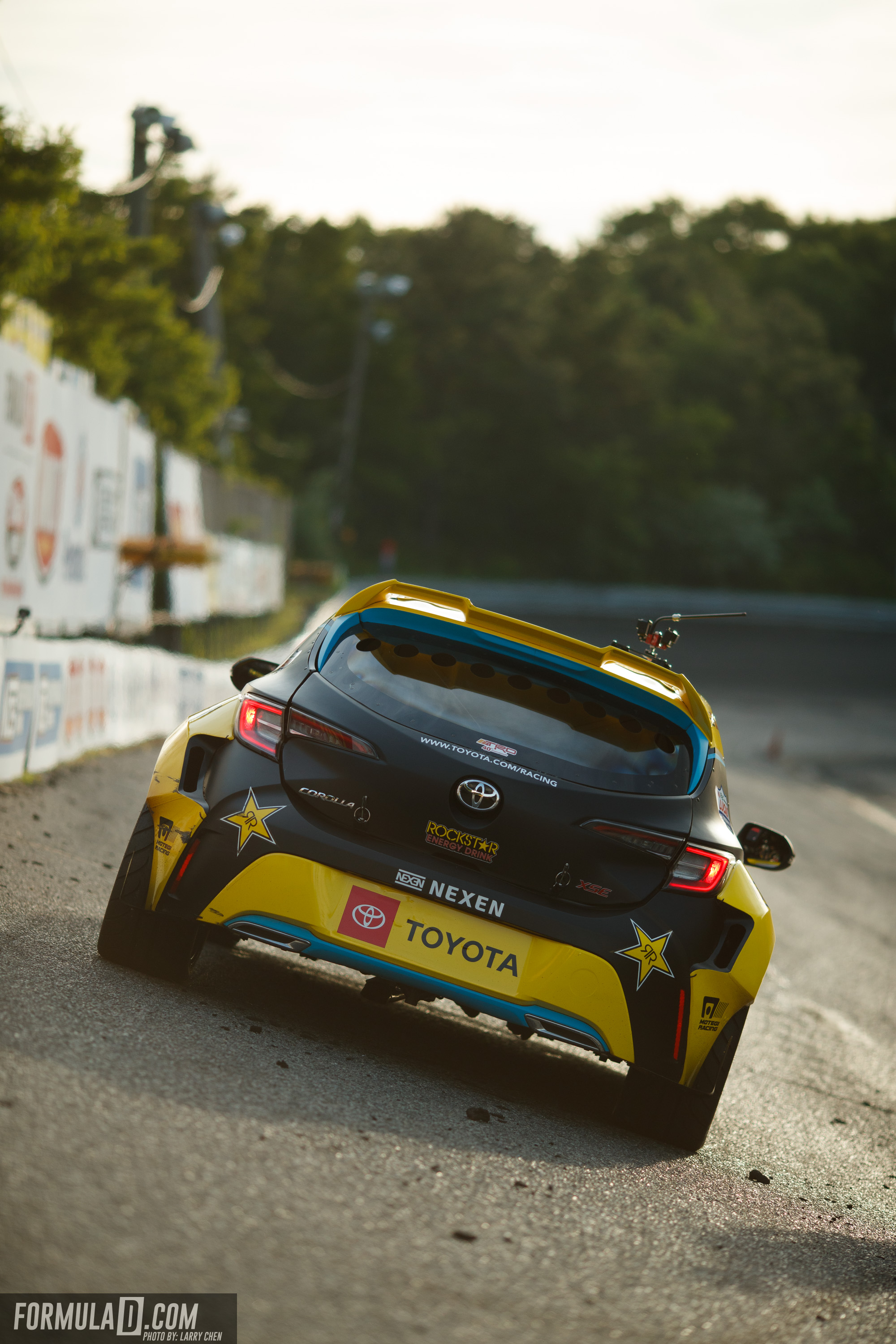 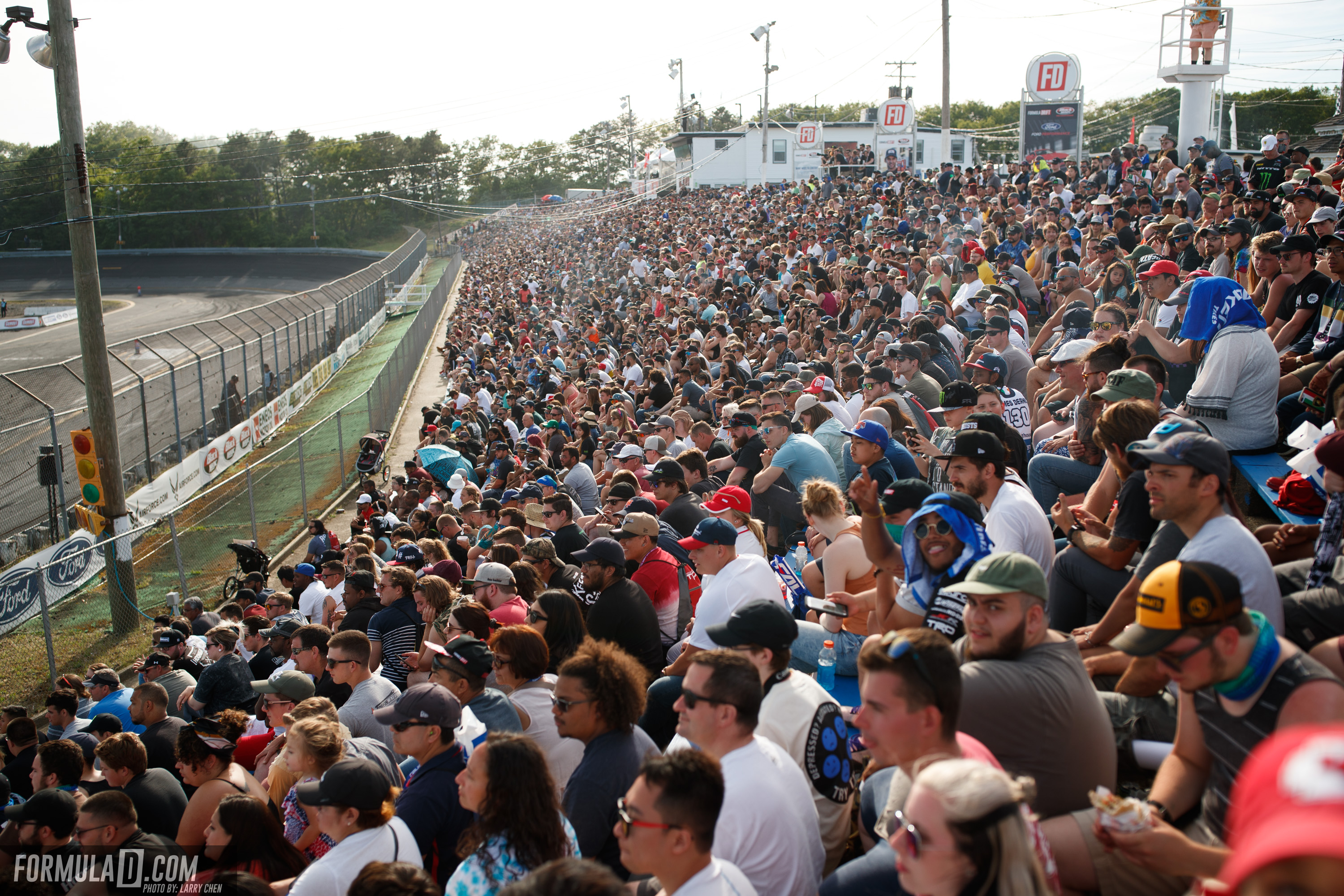 Spectators with a nervous disposition would get no relief on Saturday as it again proved difficult to separate the drivers. The judges called for “One More Time” – where the drivers repeat their two runs after it was impossible to separate them – no less than seven times. The skill and commitment across the entire Formula DRIFT Black Magic PRO Championship means there are no easy match-ups and drivers have to fight hard to advance through the heats. 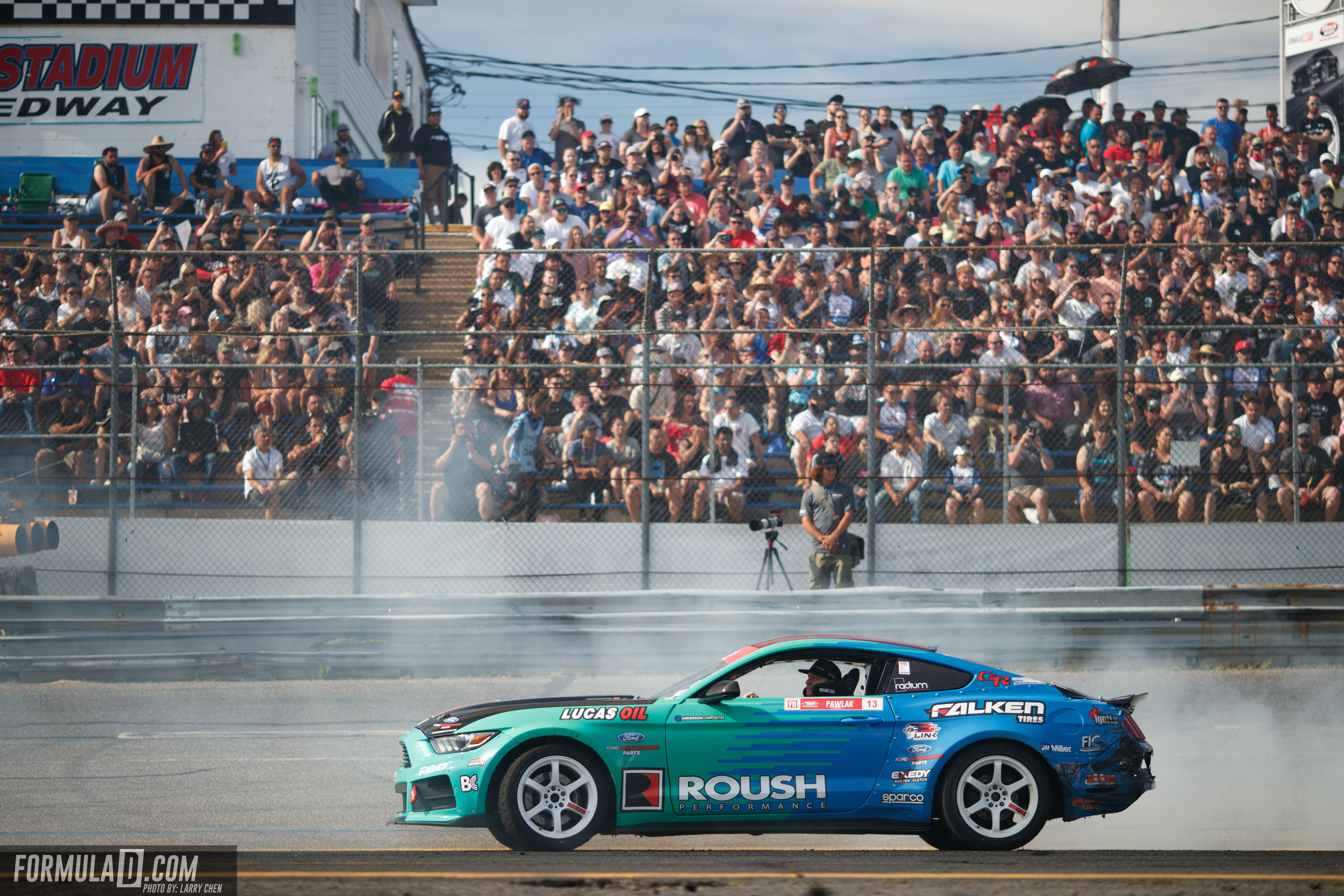 With that said, two competitors had failed to qualify, giving Pawlak a bye run in the first round as the top qualifier. He would automatically advance from the Top 32 to the Sweet 16 where he would meet and beat Jeff Jones (USA) in the Doc / Falken Tire Nissan 370Z. Unfortunately, Jones collided with the wall on his first run and was unable to repair the car during a Competition Timeout. 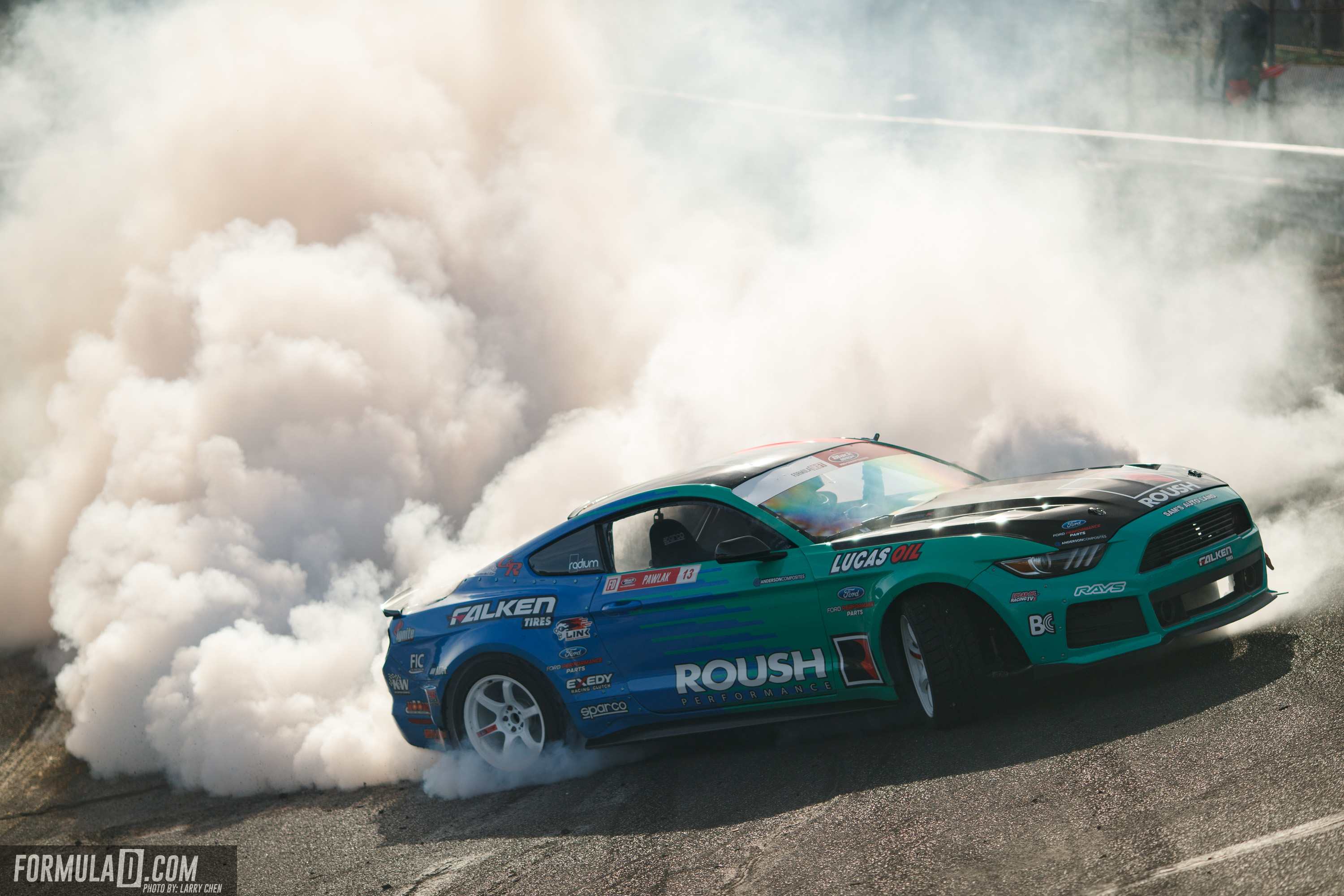 Pawlak would meet Ryan Tuerck (USA) in the Great 8. Tuerck was on his way to the final and although both acquitted themselves well, the decision was went in favor of the Ryan Tuerck Racing / Gumout / Nitto Tire Toyota 86 by virtue of a superior lead run.

Tuerck, who qualified ninth, started the day with a match-up against Dirk Stratton (USA) in the Lingenfelter Fortune Auto / Achilles Tire / Stratton Chevrolet Corvette C6. On their first run, the Vette was seen to straighten in the chase position and would request a Competition Timeout to replace a broken drivebelt. Sadly, the repair was ineffective and a second belt was shed as the cars left the line for the second run, handing the win to Tuerck.

In the Sweet 16, Tuerck faced the most successful driver in Formula DRIFT history – Chris Forsberg (USA) driving the NOS Energy Drink / Nissan 370Z on Nexen Tires. As the fans perched on the edge of their seats, the battle royale was decided in favor of Tuerck thanks to better proximity on his chase run. 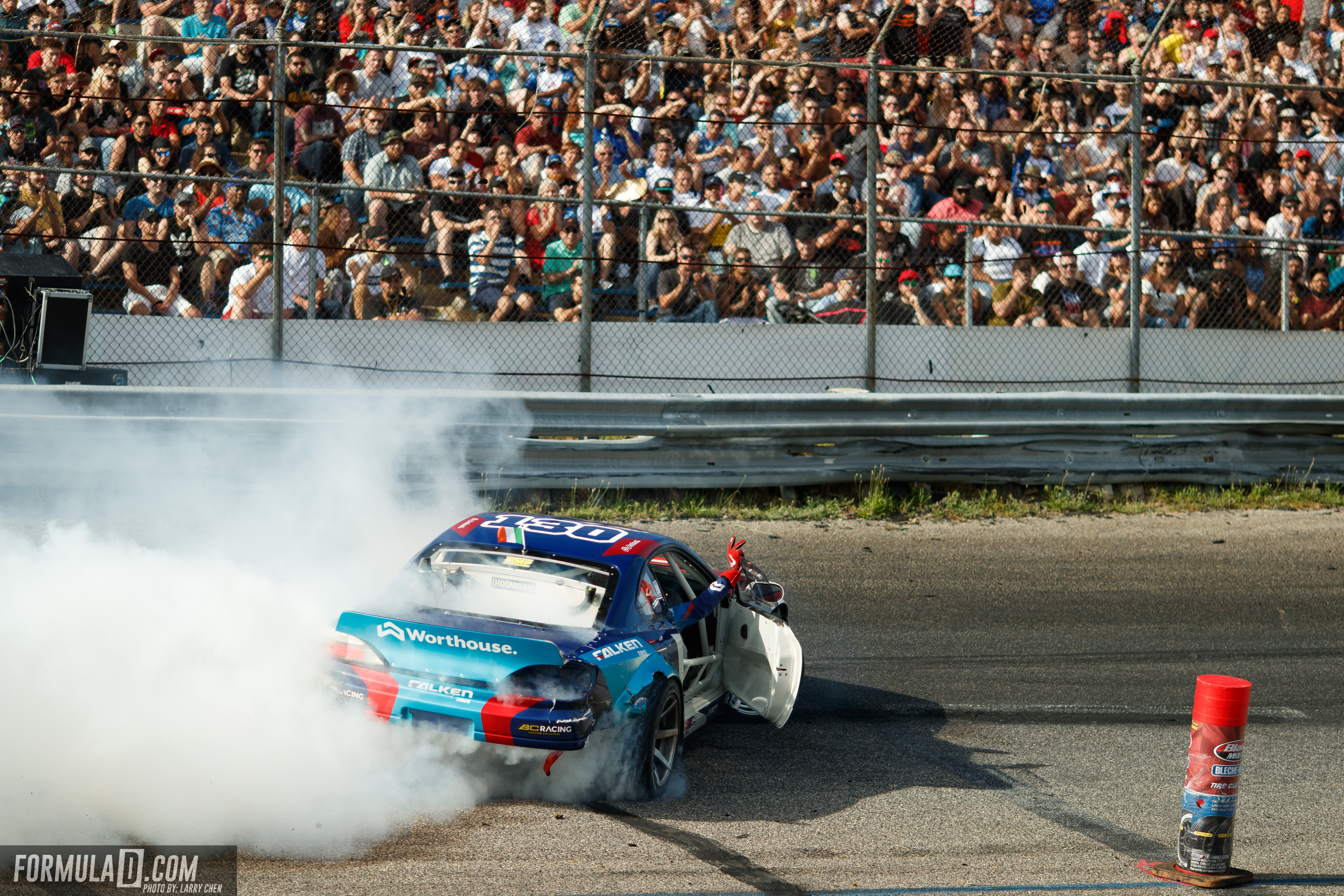 After dispatching Pawlak, Tuerck met James Deane (Ireland) in his Worthouse / Falken Tire Nissan Silvia S15. The double FD Champion has experienced a challenging start to the season but is slowly get back on track. Provided his car is reliable, the Irishman is a hard charger but couldn’t match Tuerck’s precision and transitions in the chase position. 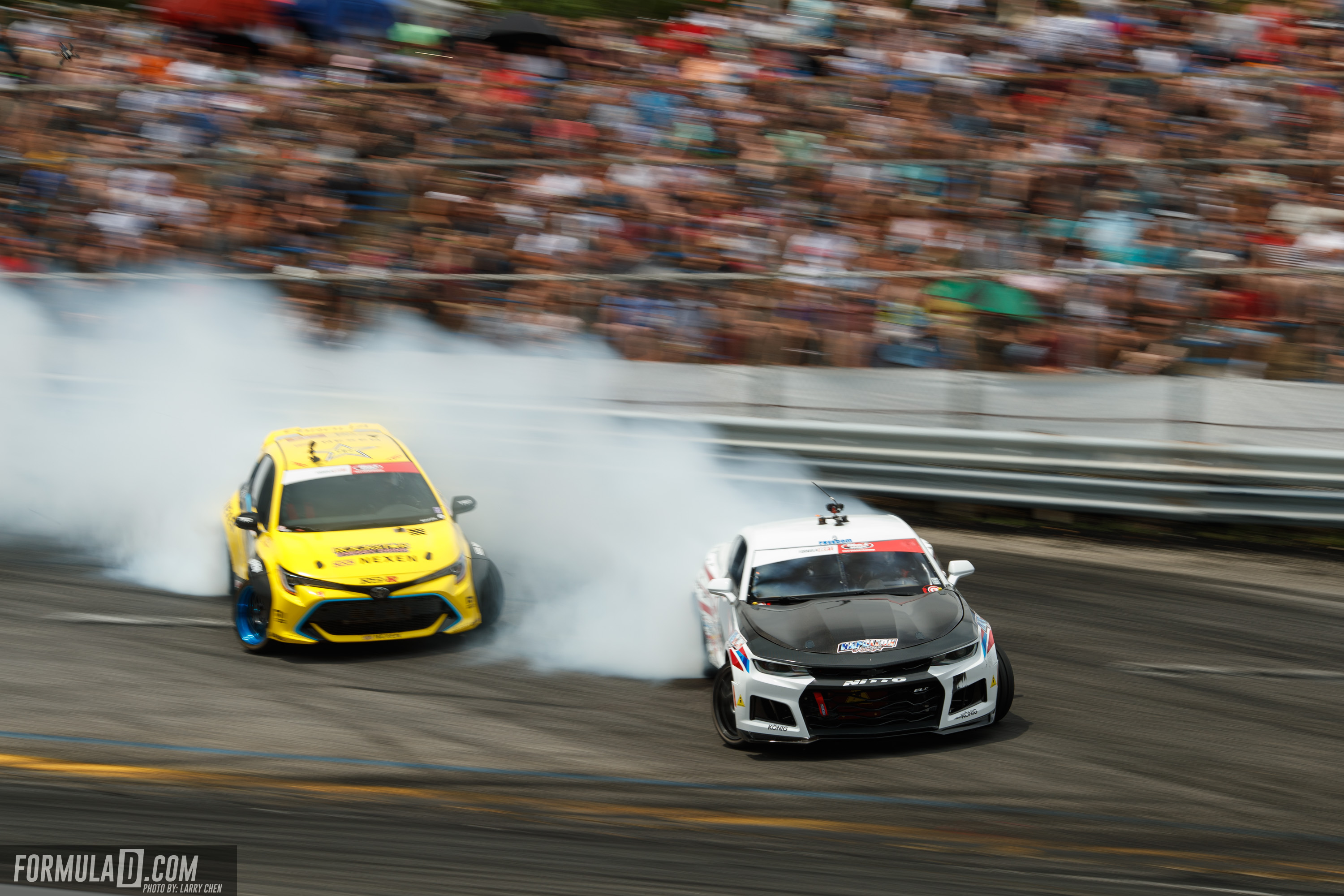 Having defeated one FD Champion, Tuerck would meet 2015 Champion Fredric Aasbo in the Final. The Norwegian’s path had been strewn with obstacles, starting with the Top 32 where we faced 2018 Formula DRIFT Link ECU PRO2 Champion and 2019 Formula DRIFT Black Magic PRO Championship rookie, Travis Reeder (USA). This was the second round in which Reeder was driving his historic Napoleon Motorsports / Turn Key / Nitto Tire Chevrolet Camaro EL1. As the first electric vehicle to ever qualify for the Formula DRIFT series, Reeder is pioneering new technology but would suffer a slight collision with Aasbo in the lead position. This was adjudged to have been the rookie’s fault, and Aasbo’s accuracy on the second run meant the decision was inevitable. 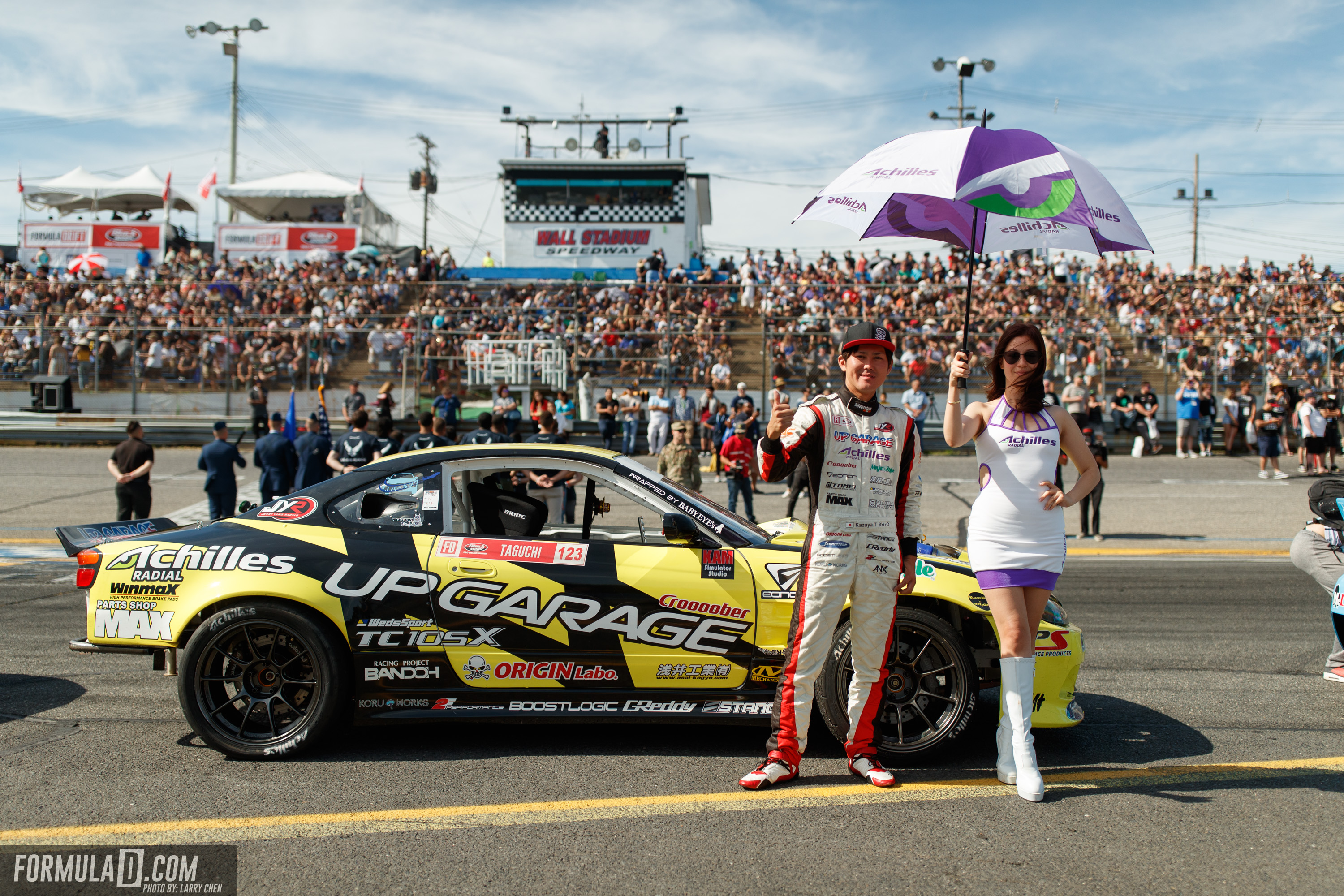 The pattern was repeated in the Sweet 16 against Kazuya Taguchi (Japan) driving the Team Jerry Yang Racing / Top 1 Oil / Achilles Radial Nissan GT-R. Taguchi would make a small mistake on his first initiation, which was enough to allow the flawless Norwegian to progress. 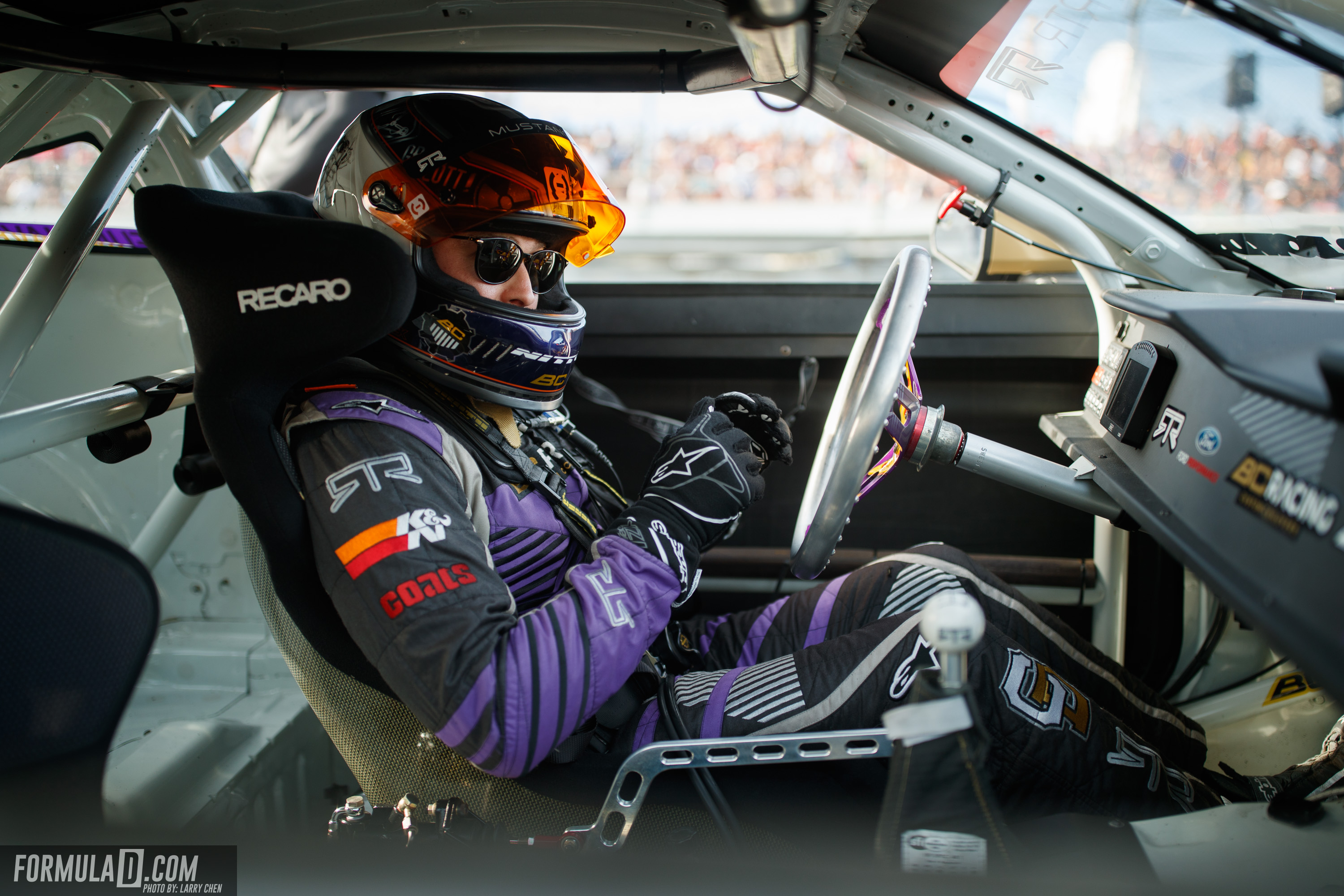 In the Great 8, Aasbo should have expected another epic battle against Piotr Wiecek (Poland). However, his Worthouse / Falken Tire Nissan Silvia S15 had been damaged in the previous round when Chelsea Denofa (USA) was slow to initiate in his BC Racing / Nitto Tire Ford Mustang RTR Spec 5-D. While the win was awarded to the Polish driver, his team was unable to effect repairs in time for the next round, allowing Aasbo to march forward again. 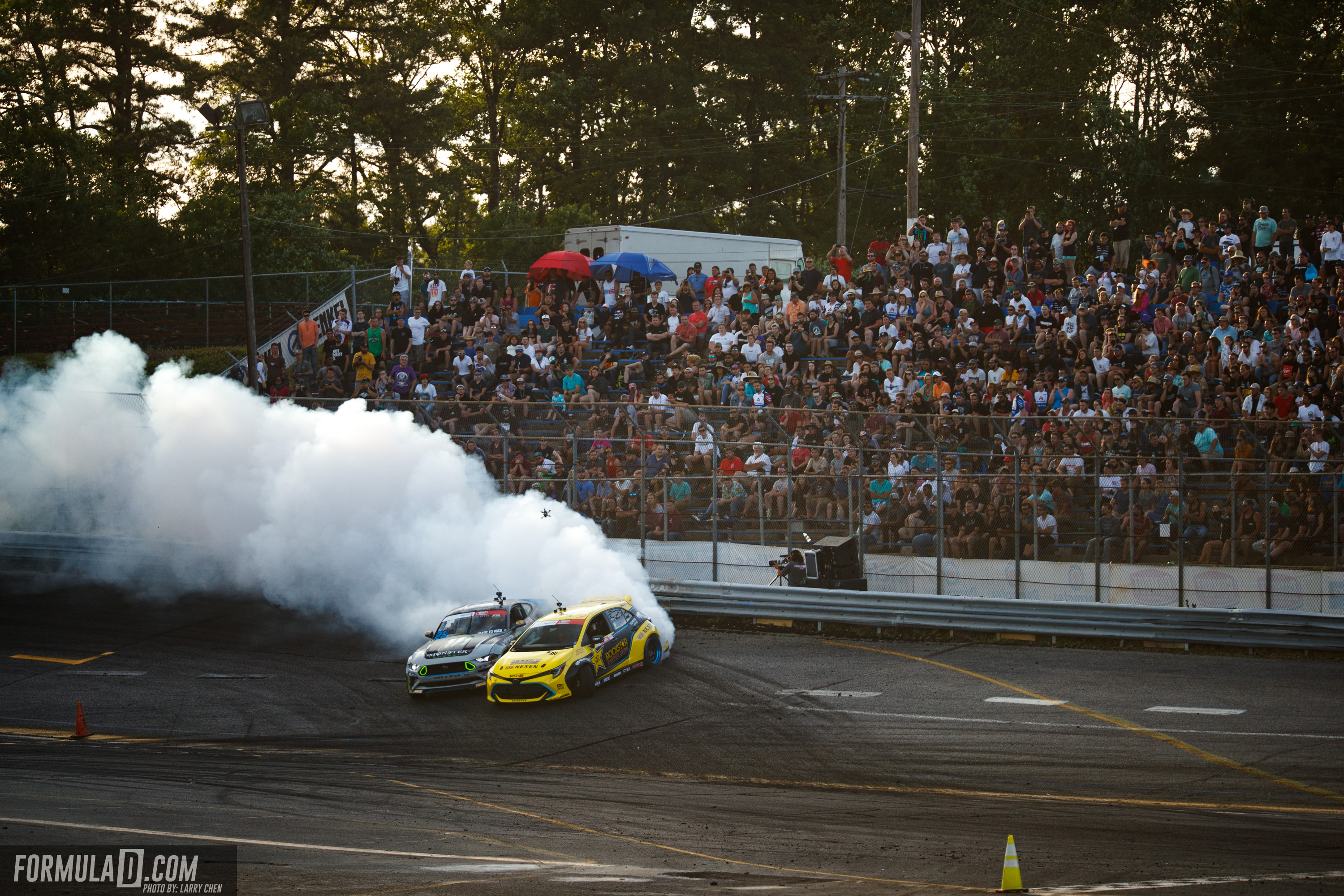 In the Final 4, the excitement was reaching fever pitch as Vaughn Gittin Jr (USA) pulled up to the line in his Monster Energy / Nitto Tire Ford Mustang RTR Spec 5-D. The 2010 FD Champion is a renowned hard-charger and the two drivers had an epic battle in the 2018 Final Round, which saw Gittin Jr take a famous win after running “One More Time” on two occasions. 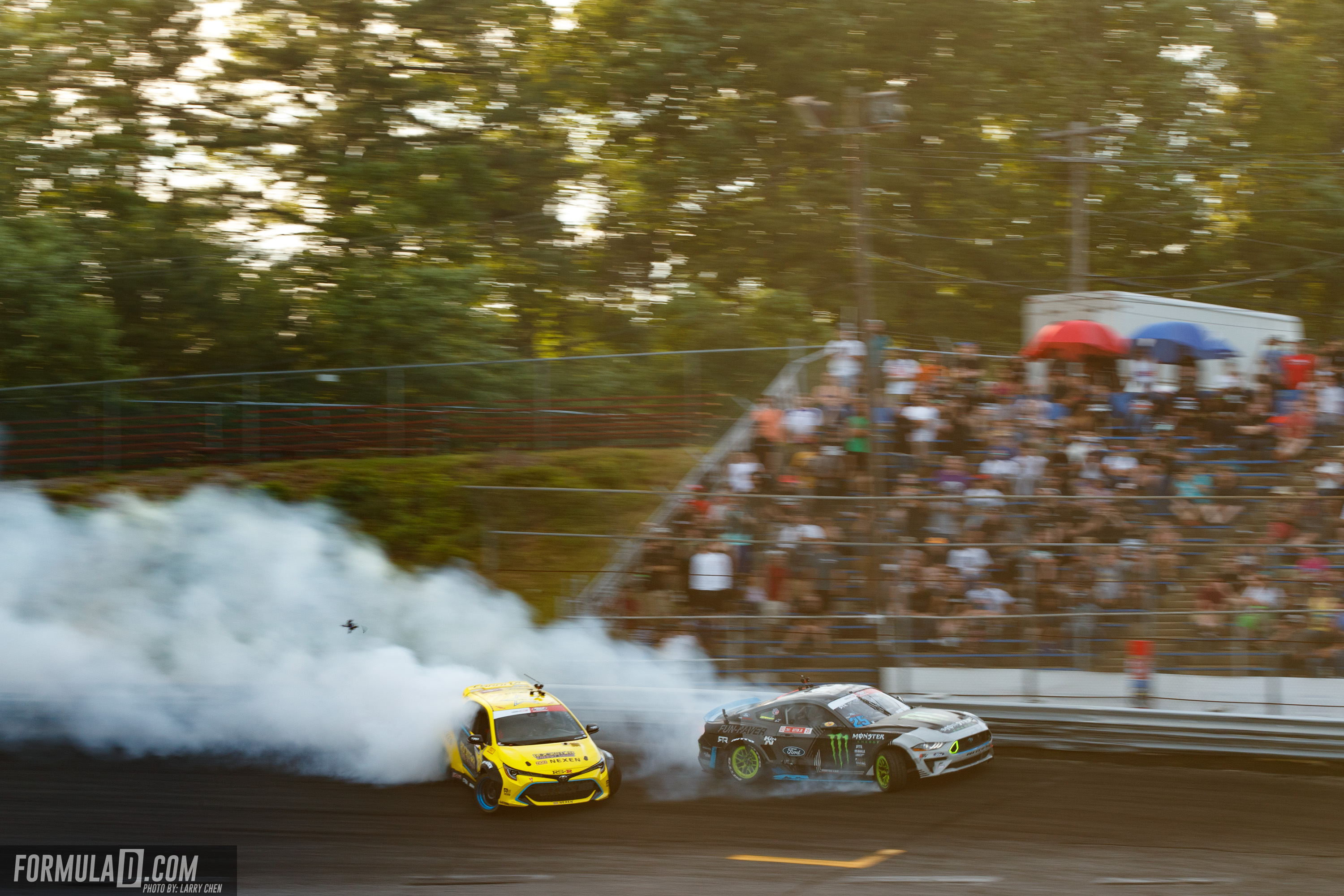 With the judges unable to separate the Aasbo and Gittin Jr on their first runs at FD NJ, they would run “One More Time,” but the final decision would be simpler in 2019. On their first repeat run, the two drivers made contact. And while Gittin Jr was ruled to be at fault, his team was unable to complete its repairs during the Competition Timeout. Rather than forfeit the round, Gittin Jr took the starting lights but his rear-end would slide up into the wall in the first turn. This knocked the Mustang RTR Spec 5-D off-line, pulling the front of the car into the same wall and causing significant damage. With Gittin Jr unable to continue, Aasbo headed to the Final against Ryan Tuerck. 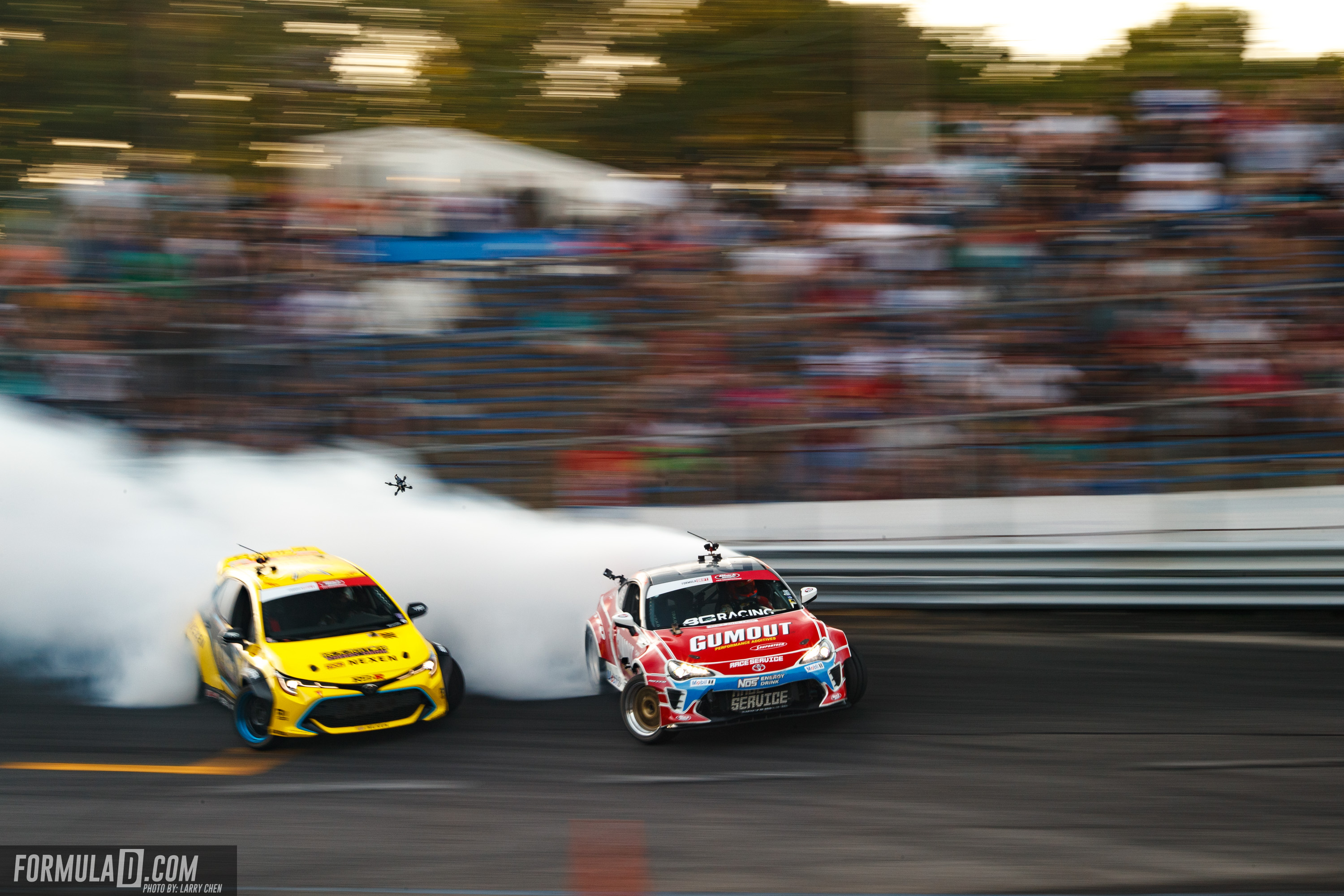 As the two drivers entered the starting gate, fans were assured a tumultuous battle and nobody would be disappointed. The speed and precision of both drivers was worthy of a series highlights reel as they ran deep into the turns and tight to the clipping points. In the end, Aasbo was deemed to have sacrificed his proximity at the start of his chase run, while Tuerck had been all over the Norwegian like a rash. 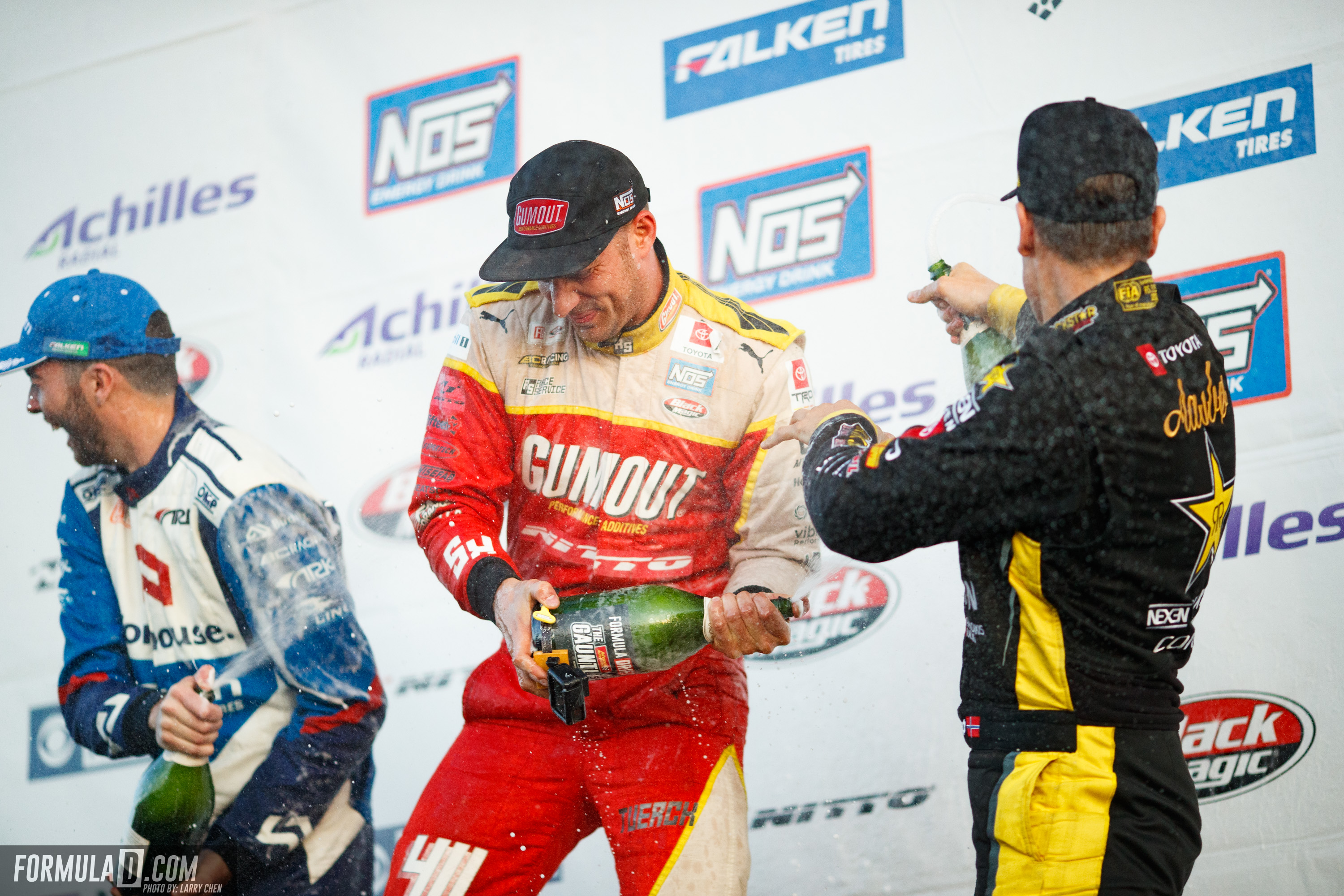 “The weekend was phenomenal,” a delighted Ryan Tuerck told us after the podium ceremony. “The car setup was great – I was very comfortable behind the wheel but left a little on the table in qualifying when I finished ninth. I wanted to do better in the heats and knew we had the car to win. The team was also great at setting up the car for each driver we faced and once we beat Chris (Forsberg) it gave me a lot of confidence. He’s the best in the series and I felt we could go all the way after that, so it was great to take the win.” 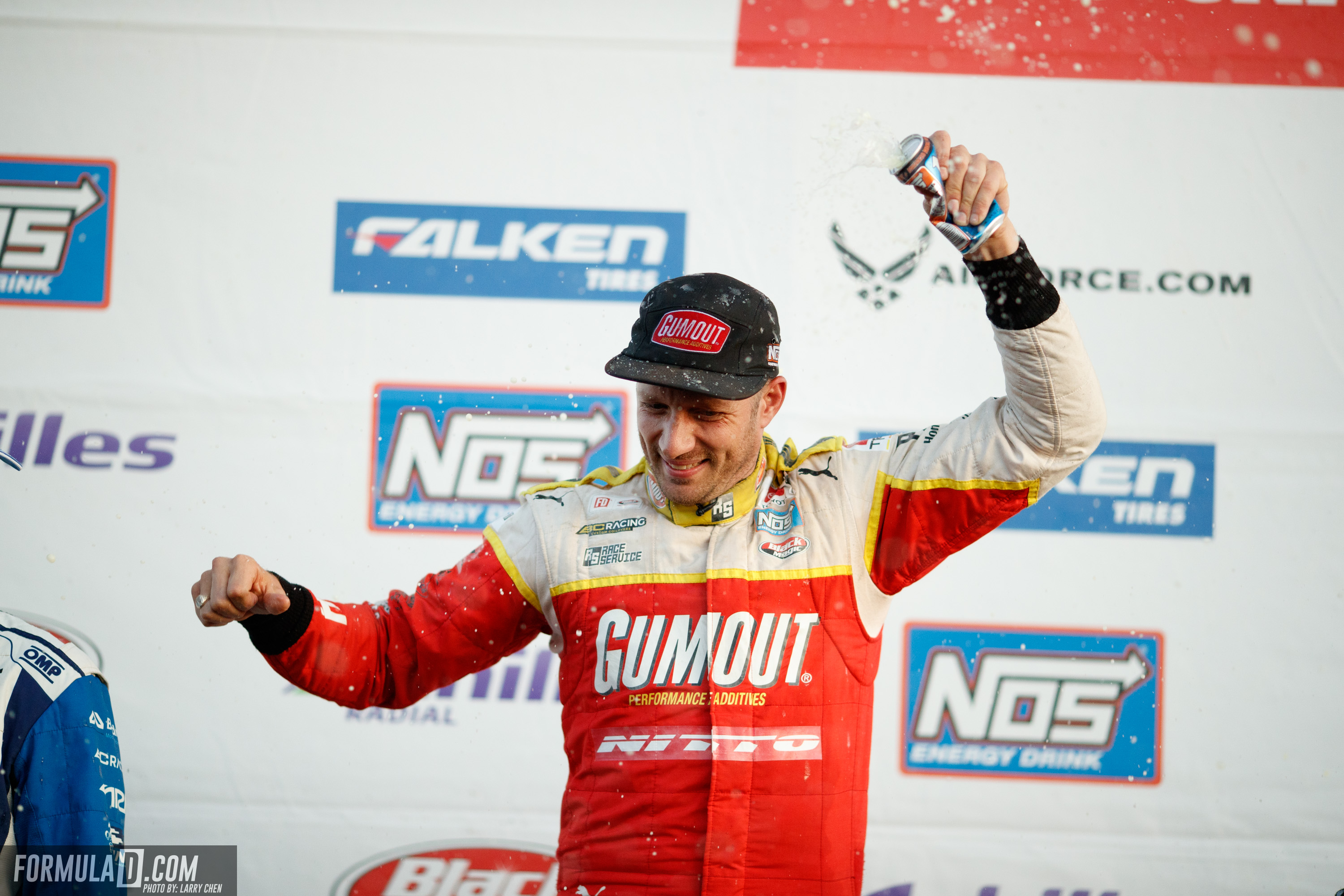 Catching up with Formula DRIFT president, Jim Liaw, we got his impressions of the weekend. “The great weather brought a sell-out crowd to Wall Stadium Speedway to witness this intense season continue to be ultra-competitive. And it was great to see Ryan Tuerck clinch a hard-fought win to cap his recent success following his unfortunate accident in round one. The win is a testimony to the determination of Ryan and his entire team. As for the 2019 Formula DRIFT Black Magic PRO Championship, this round marks the end of our East Coast travels and the halfway mark in the season. Yet it’s also proved that absolutely anything can happen – we’re all looking forward to seeing what unfolds at the next round in Seattle. 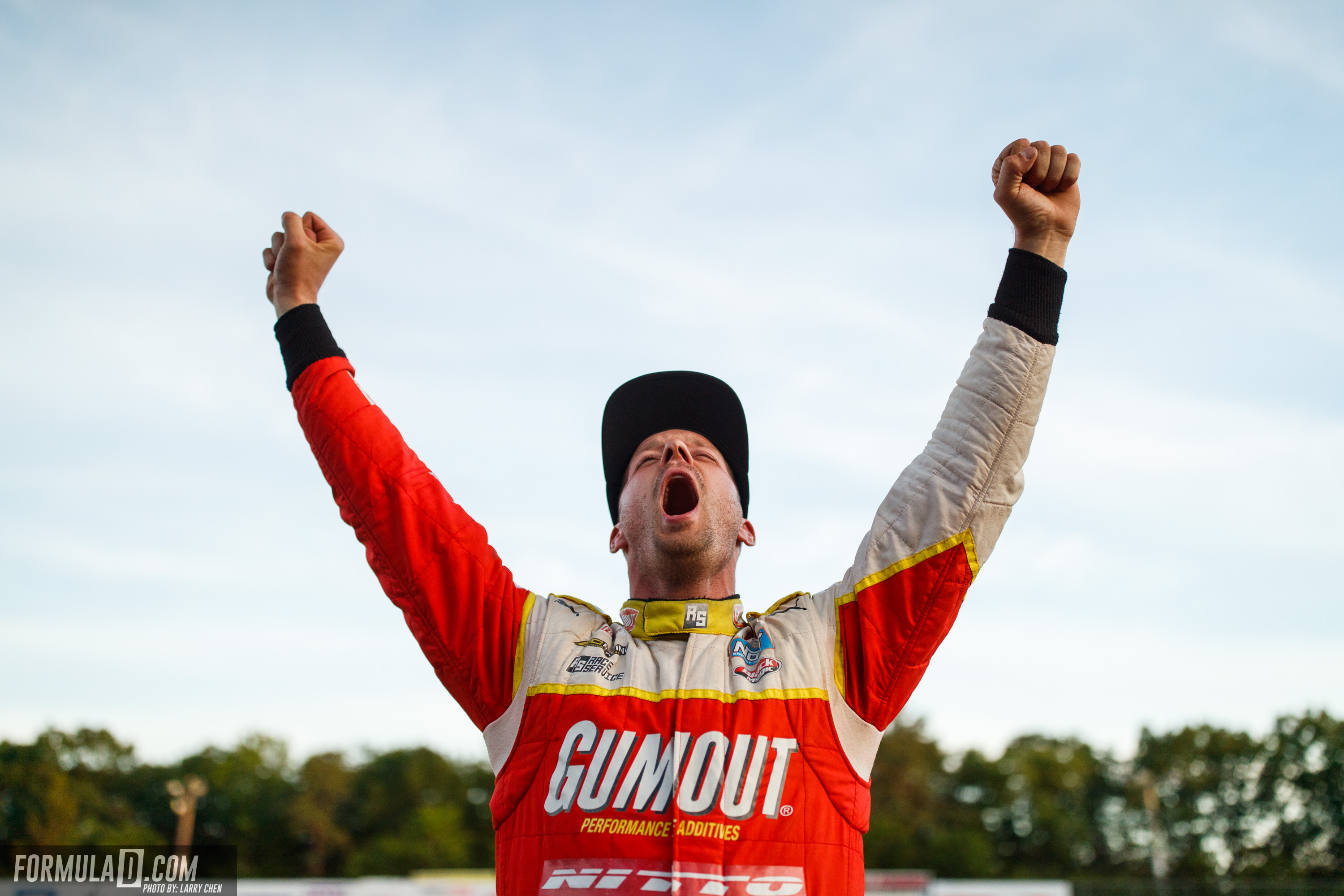 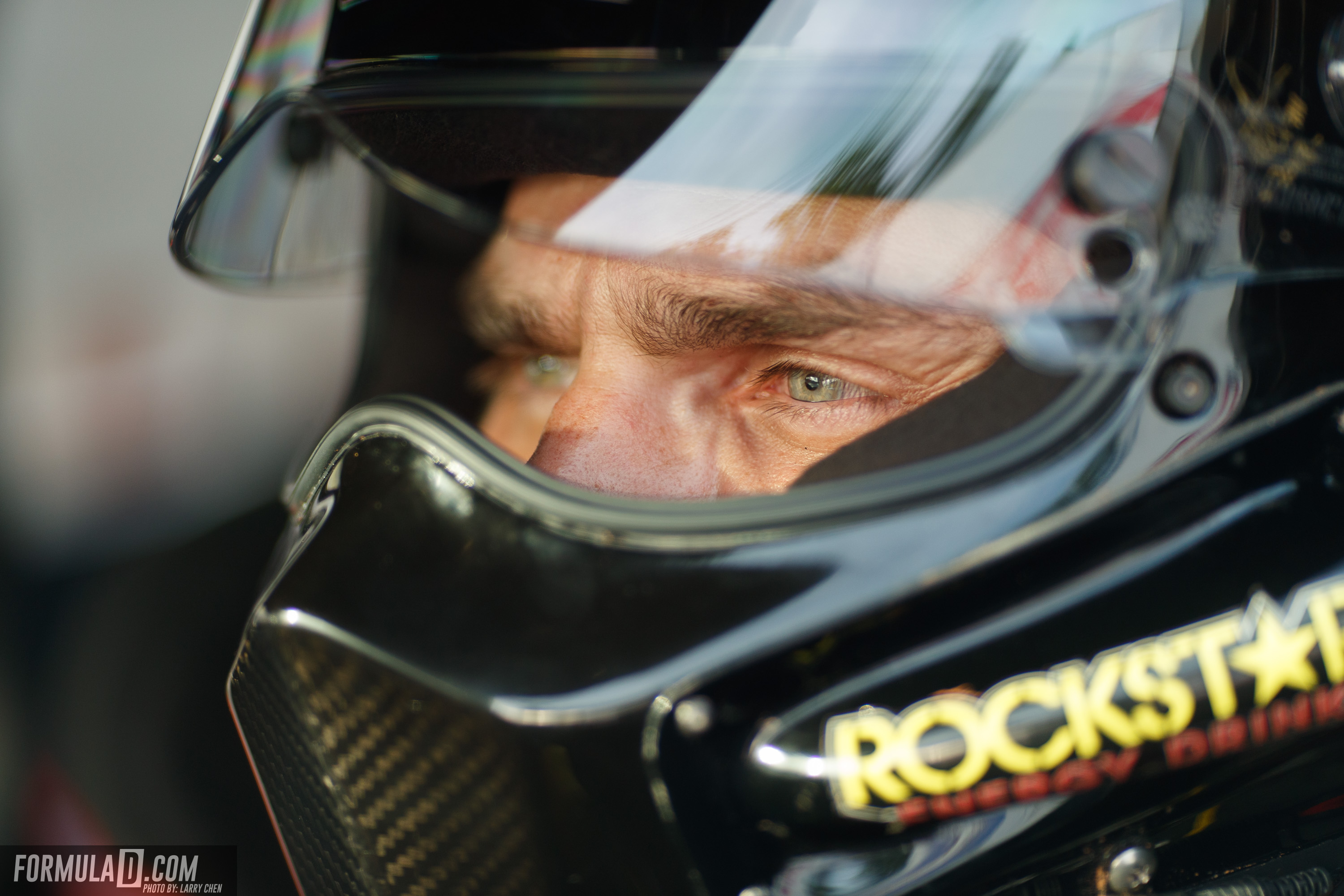 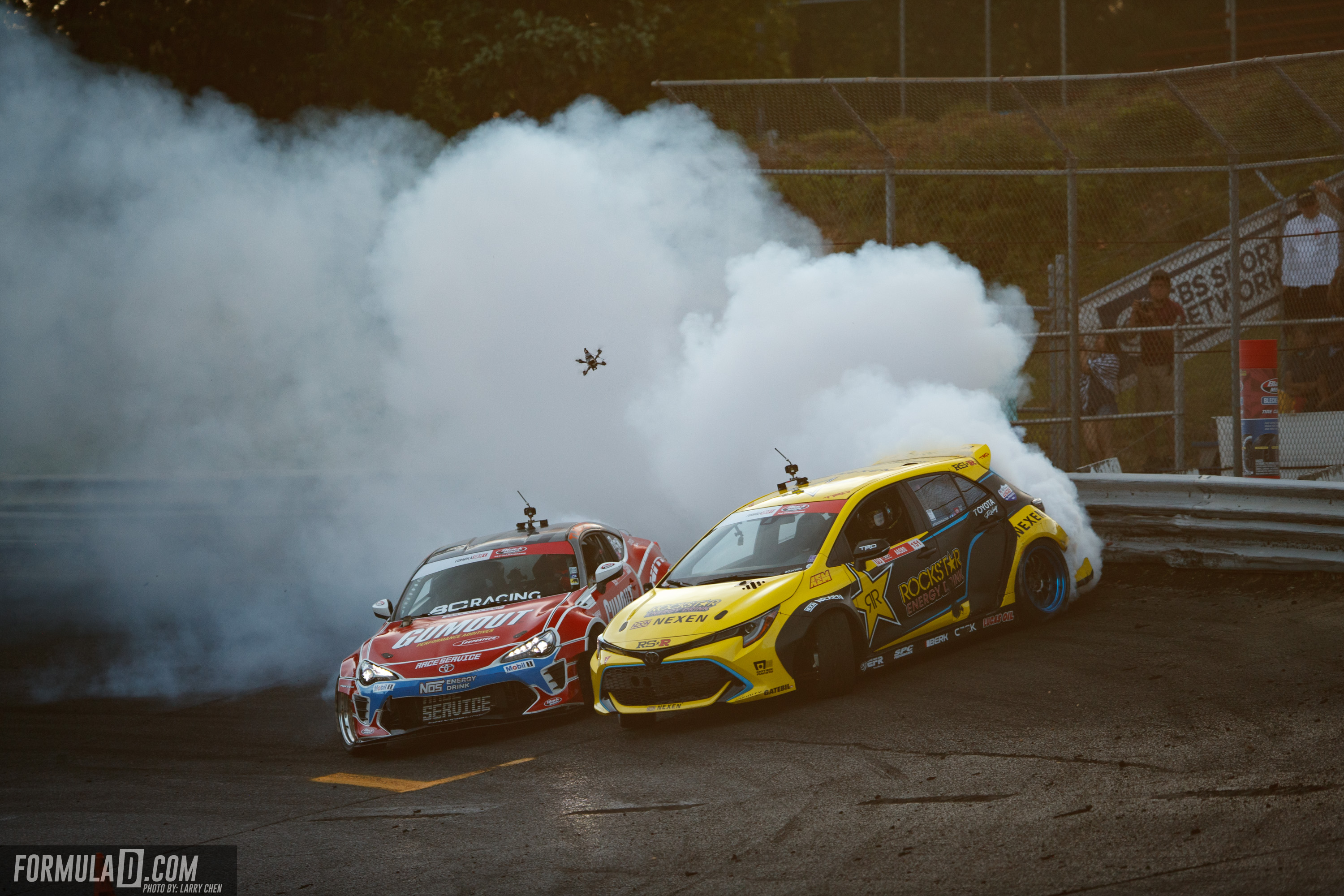 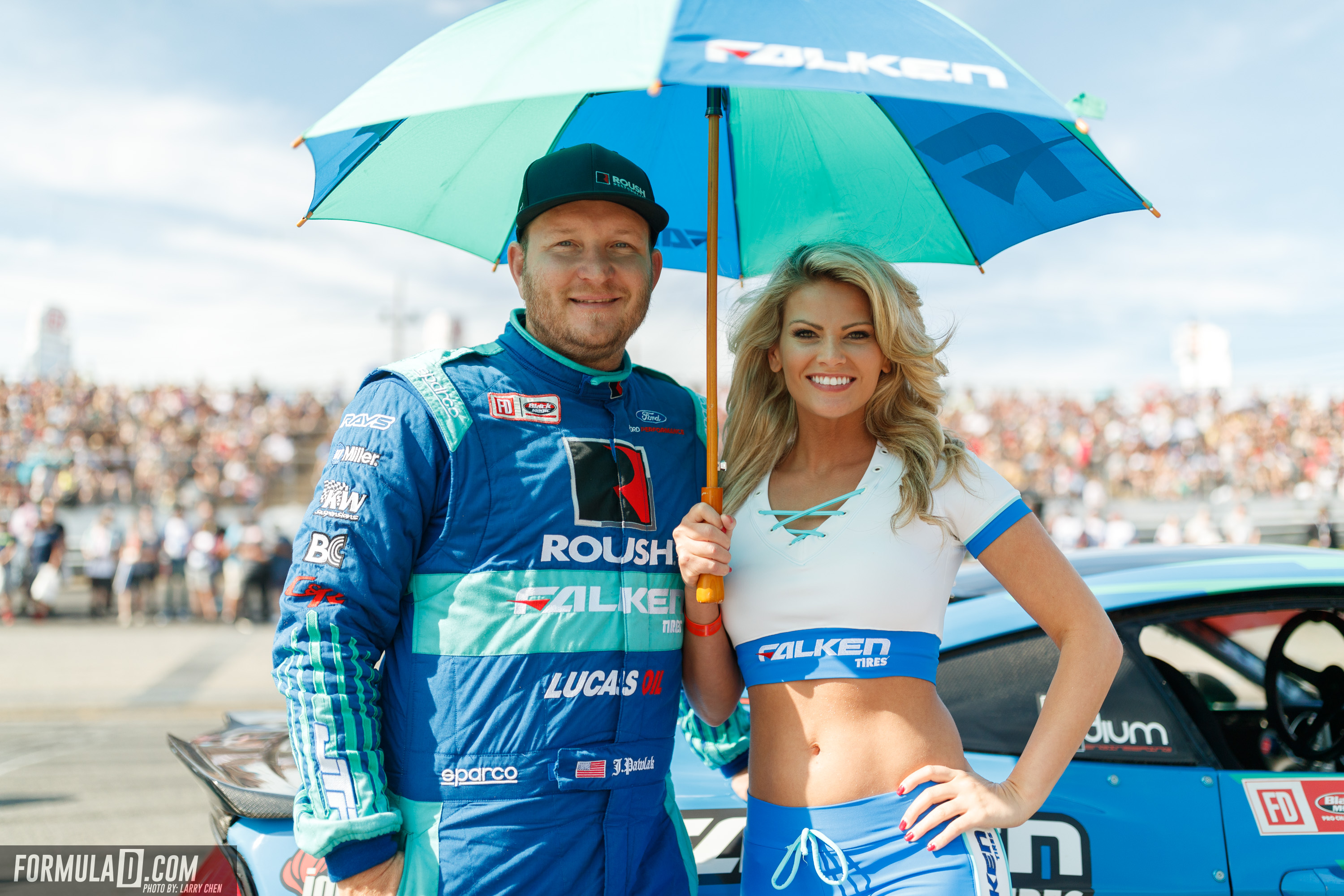