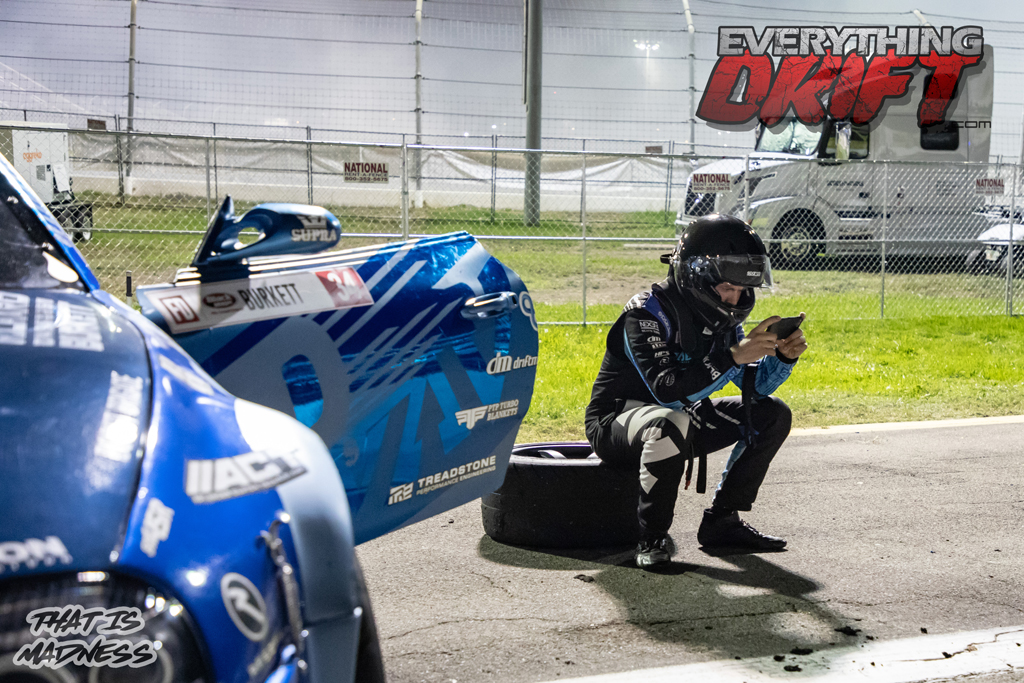 There is a time to get serious and time to sit down and relax. Dan Burkett #34 watching some videos before going back to get more practice time. 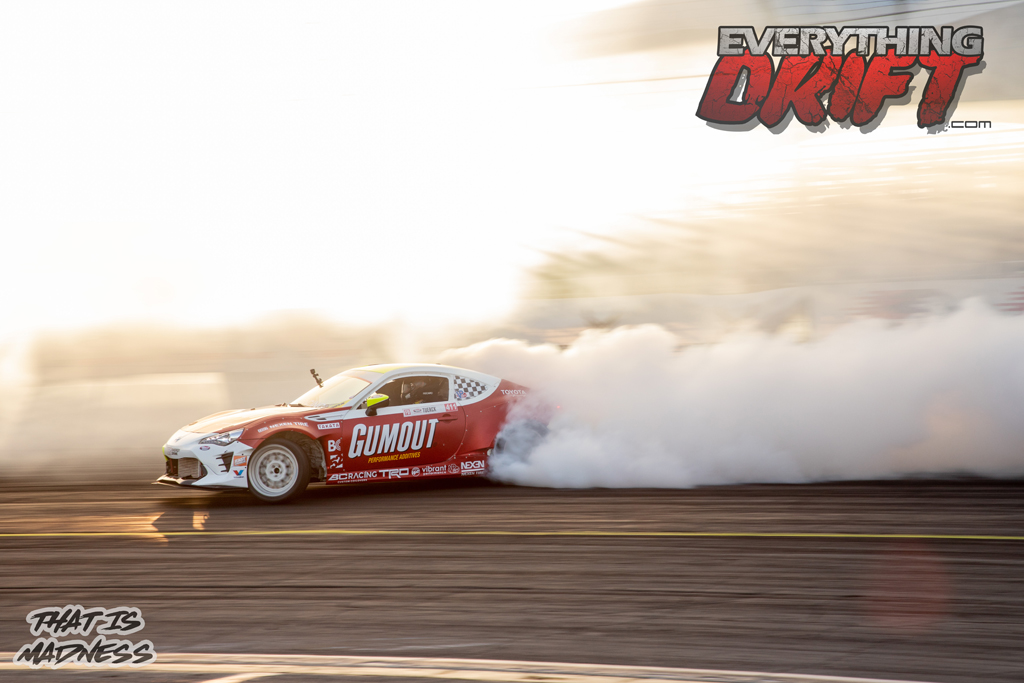 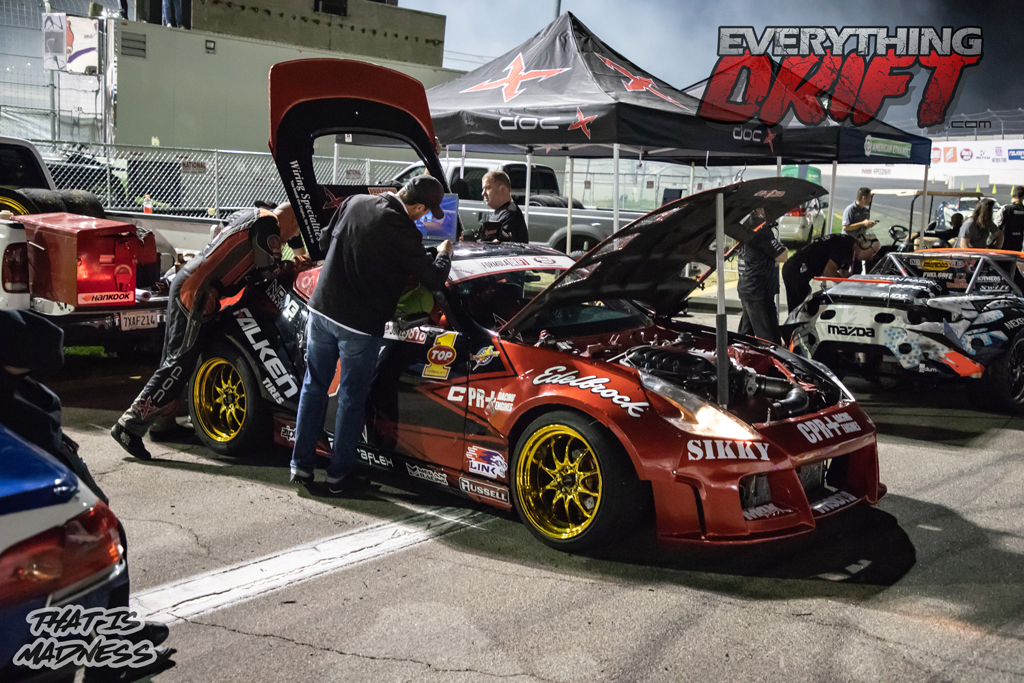 Jeff Jones #818 was having some issues during his practice runs. His team including Rome Charpentier, who just received his Pro2 license this year are helping out. They plug in the computer and the numbers will not lie. 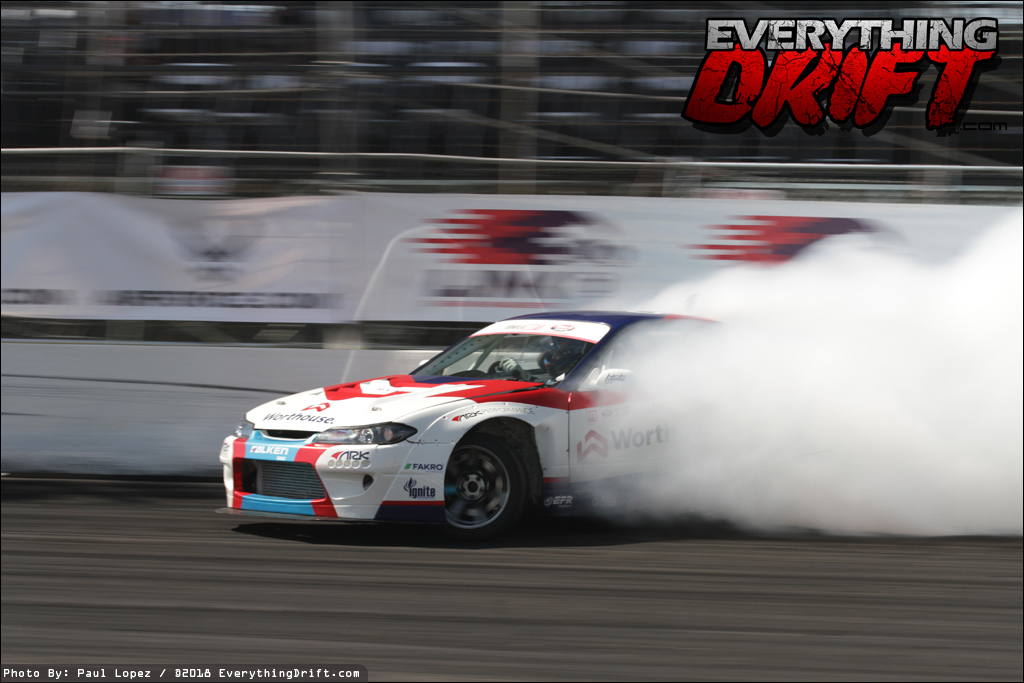 Dean kicked off his title chase with taking the number 1 Qualifying position along side his Worthouse team mate and defending race winner Piotr Wieck taking the 2nd opitions continuing to show the dominance of this team and drivers. 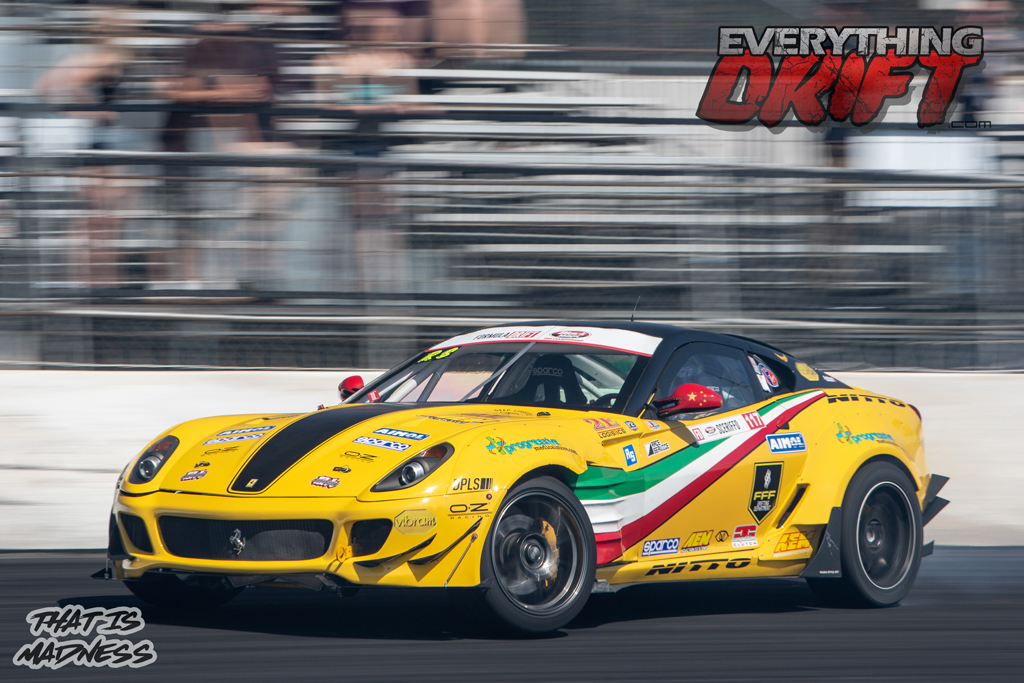 Federico Sceriffo #117, had a rough time this round. During practice, he lost his passenger rear wheel. He did make it to Top 32 but lost again Ryan Tuerck #411. 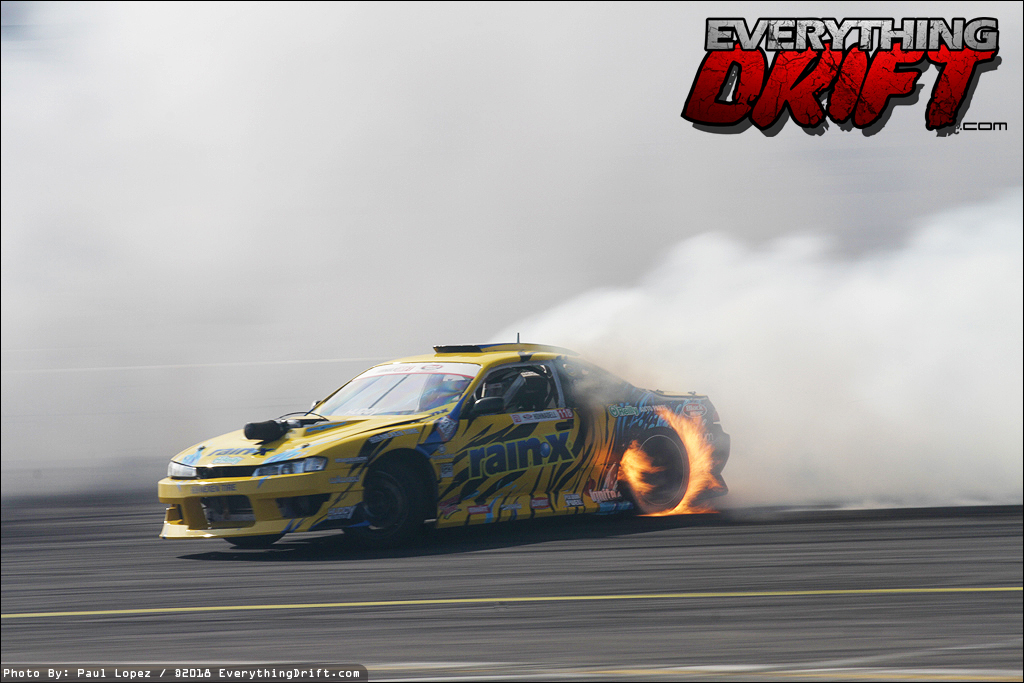 Fan favorite Alec Hohnadell lighting up his NEXEN tires putting on an amazing show for the fans. All the drivers seem to give it there all this round and manage to put down some amazing run. 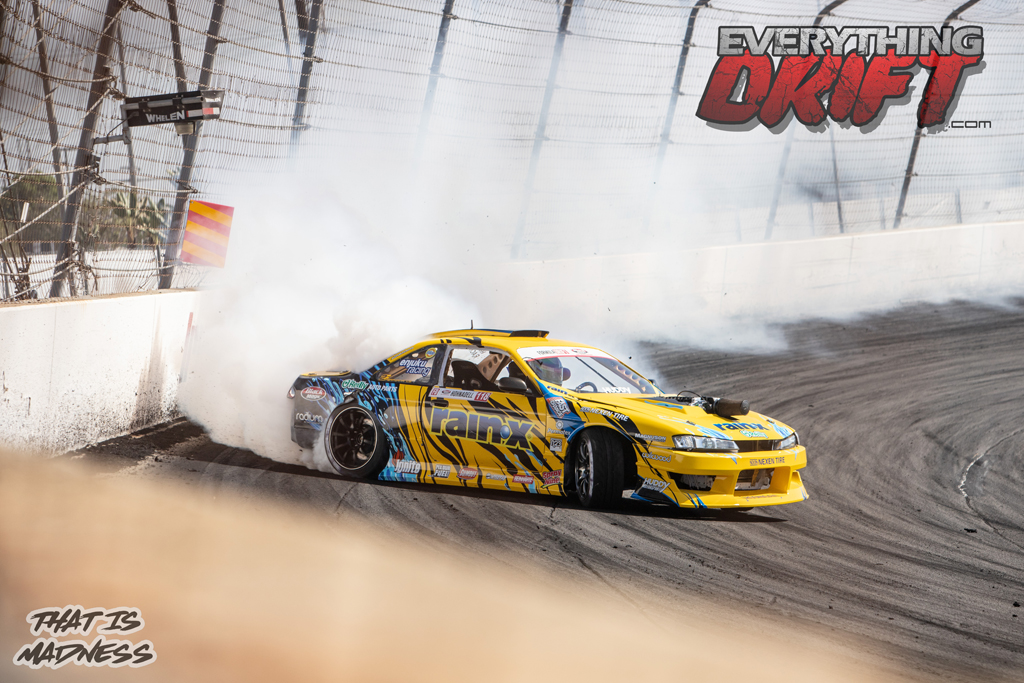 Alec Hohnadell #118, qualified 9th place but lost against Kenshiro Gushi #21 during top 16. Little did we know that Alec was leaving us a hint for later that night. Hope the Pro2 drivers got some Rain-X before it started raining during Pro2 Top8 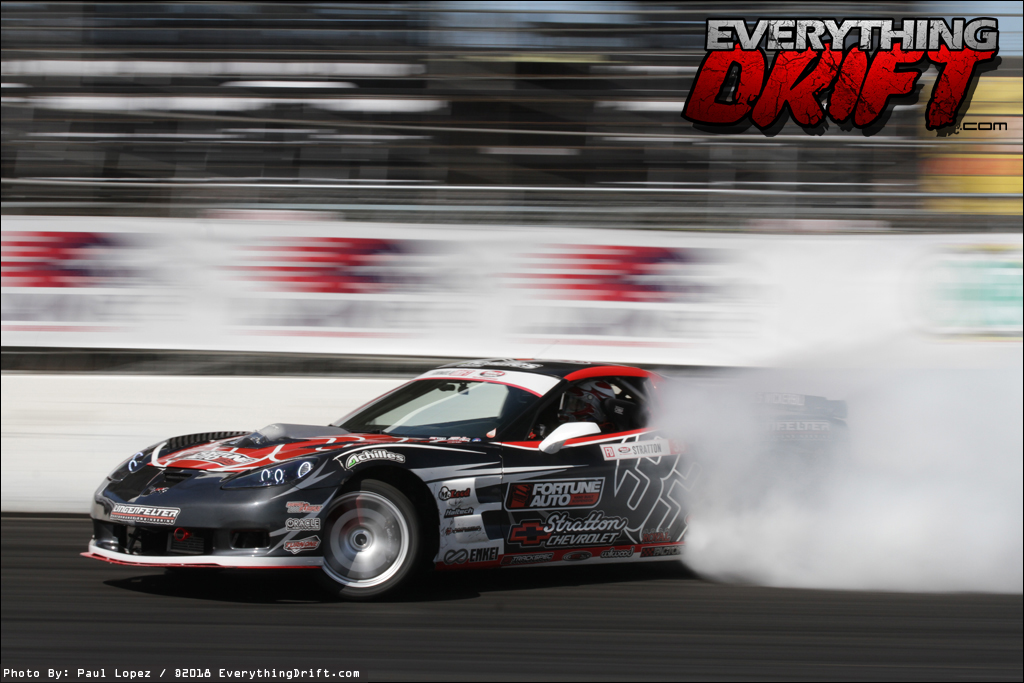 Dirk Stratton claimed Rookie of the Year  beatting Matt Vankirk by only two points.  Stratton was putting down some amazing run all weekend, but would see his night end in top 16 being eliminated by Daijiro Yoshihara. 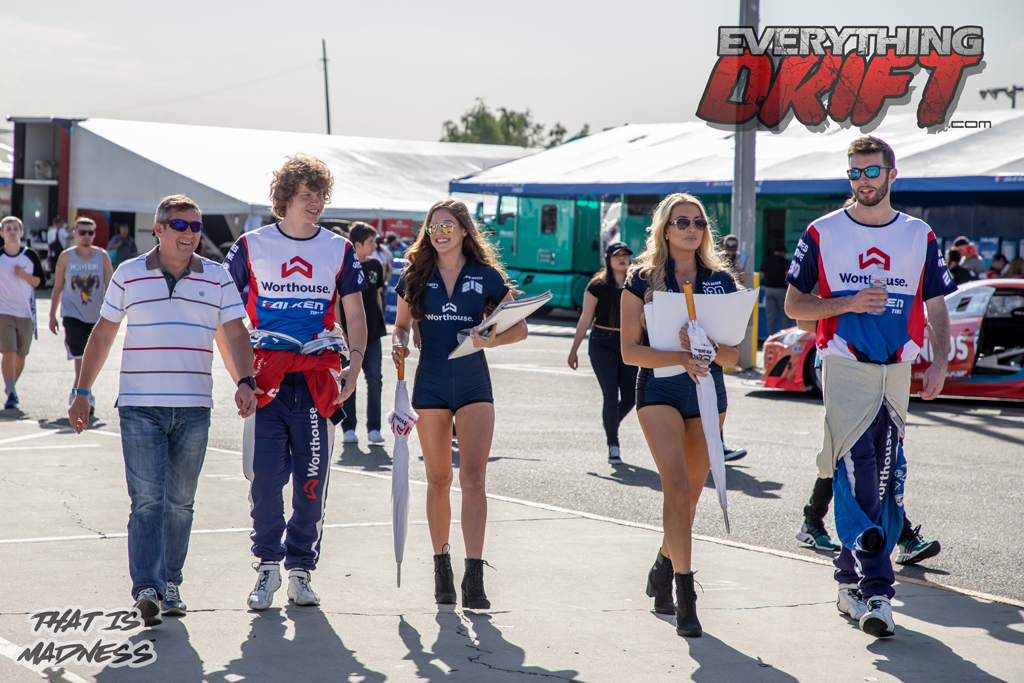 Piotr Wiecek #215 and James Deane #130 are heading over to sign some autographs. Both qualified for top 32 and have a byrun assuring them the top 16 position. 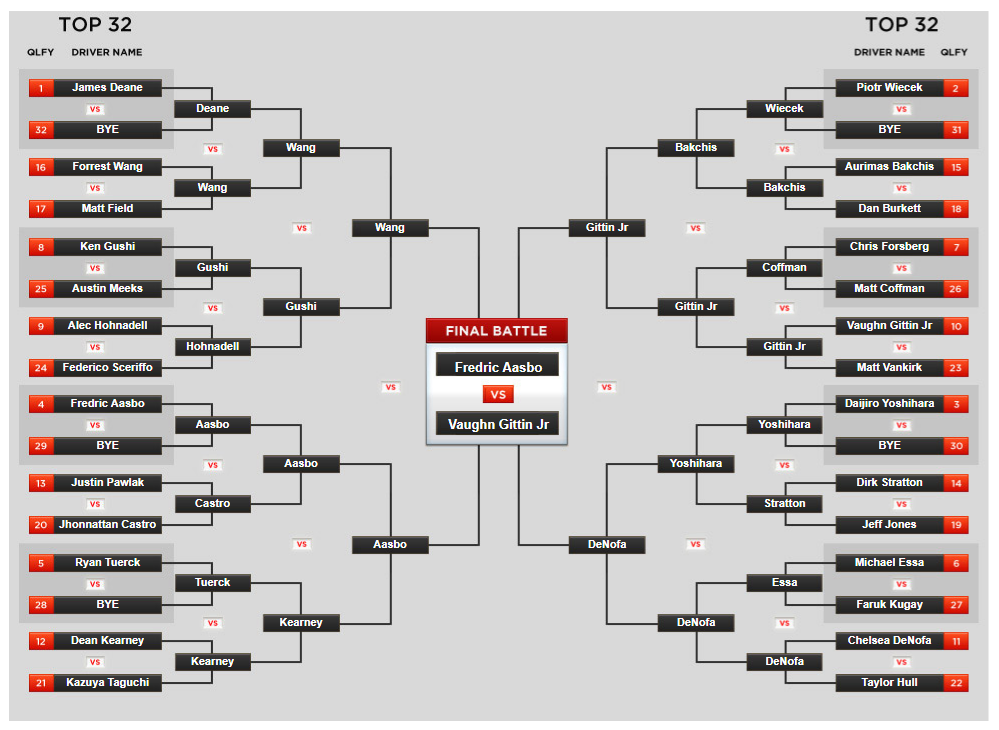 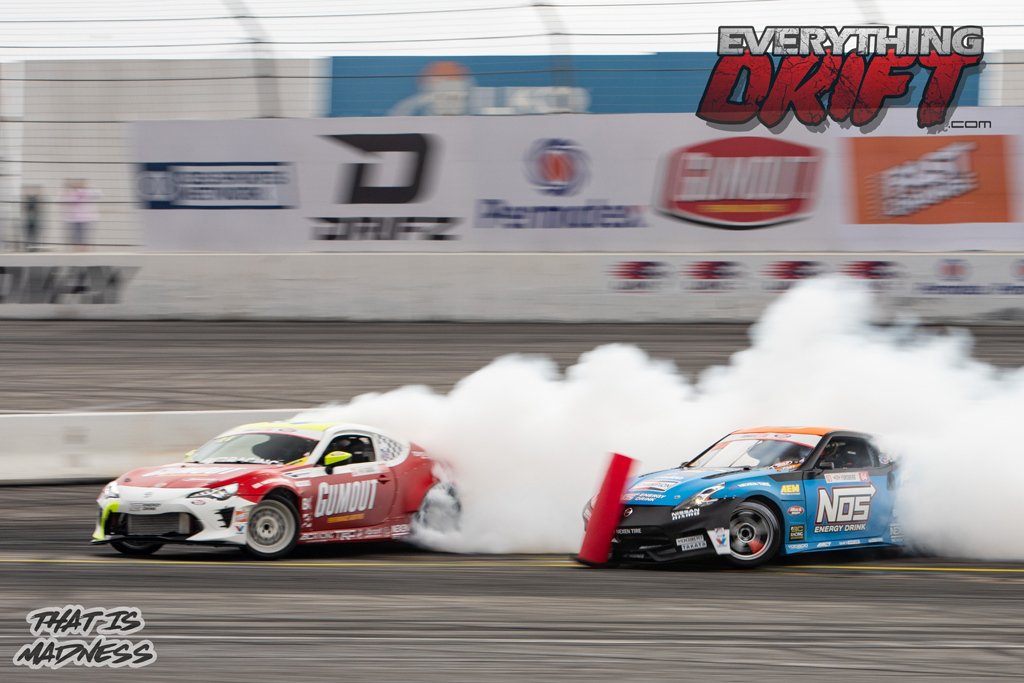 Ryan Tuerck #411 and Chris Forsberg #64 having a practice tadem before going to Top 32. Chris give the cone some love, as it was not getting love from other drives at this time. 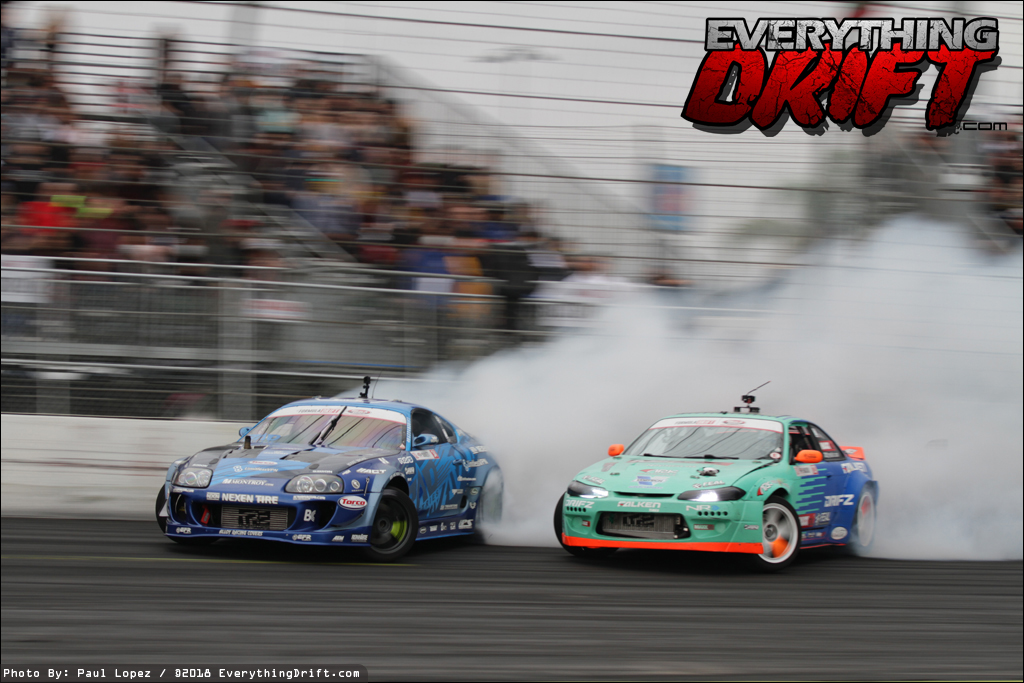 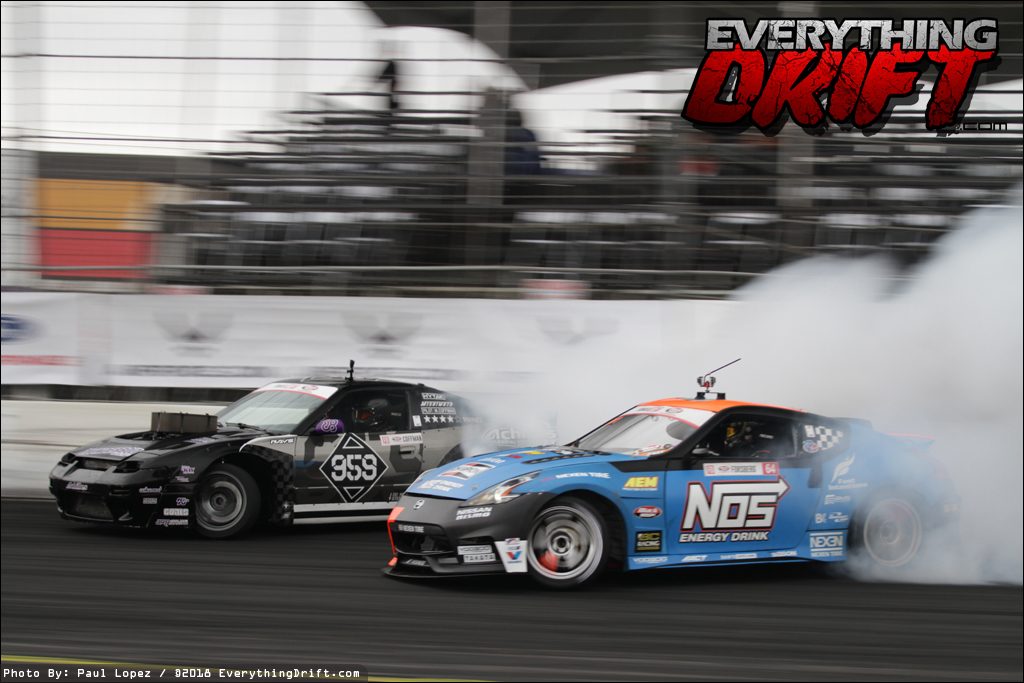 Matt Coffman was able to take out 2009 Champion Chris Forsbeg who car was seeming to not be running 100% but still Matt’s run were very consistent. He would move on to face Vaughn Gittin in top 16 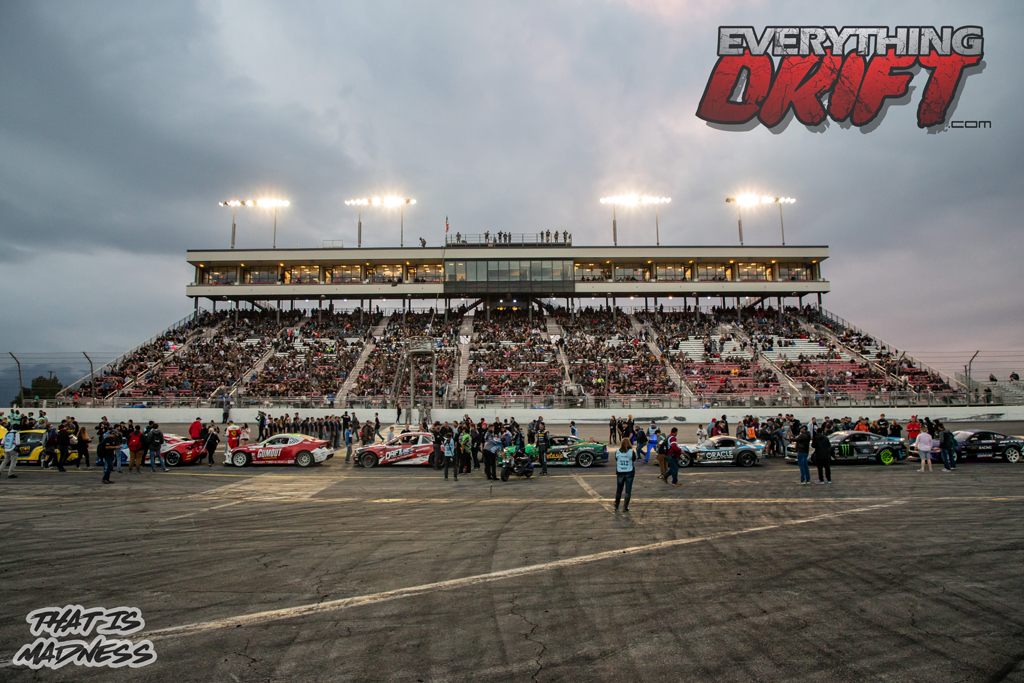 The world famous “House of Drift” Irwindale Speedway makes a comeback after it was schedule to be demolish and turned into an outlet mall. I am glad to say that we will not be buying around here for a while. 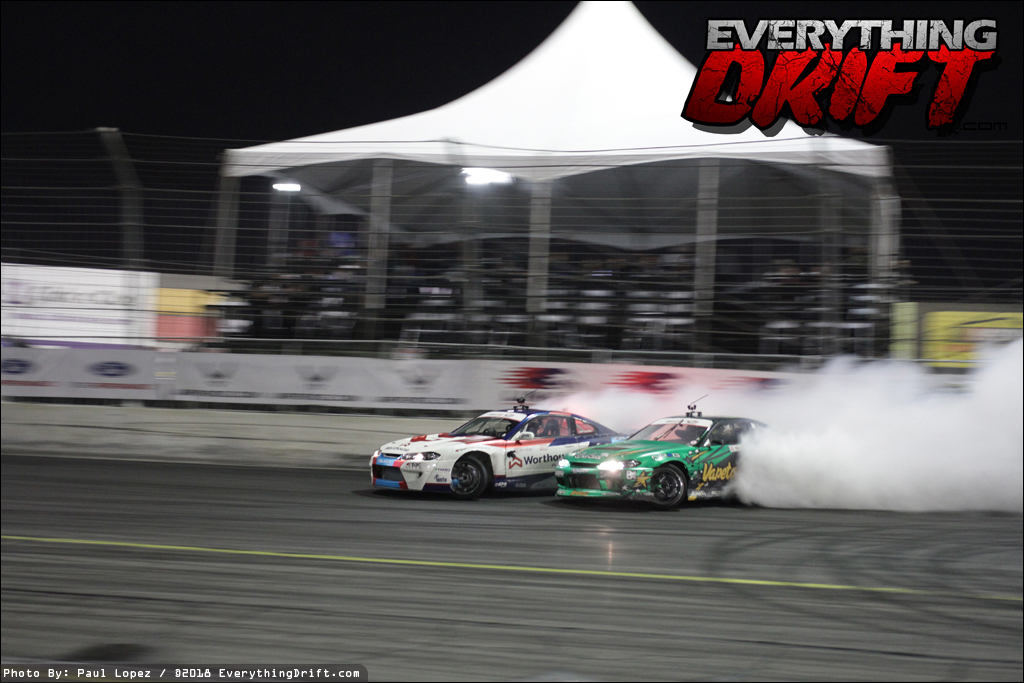 The shocker of the weekend was when Forrest Wang took out Point Leader Dean in there top 16 Battle. Forcing Dean to watch from the sideline as Aasbo continued on all the way into the finals. Wang showed a massive resurgence this year and sure did not disappoint this round, He would also face off against Aasbo in the final 4 battle. Were sure Forrest will be a contender for sure next year and we cant wait to see more of his amazing talent. 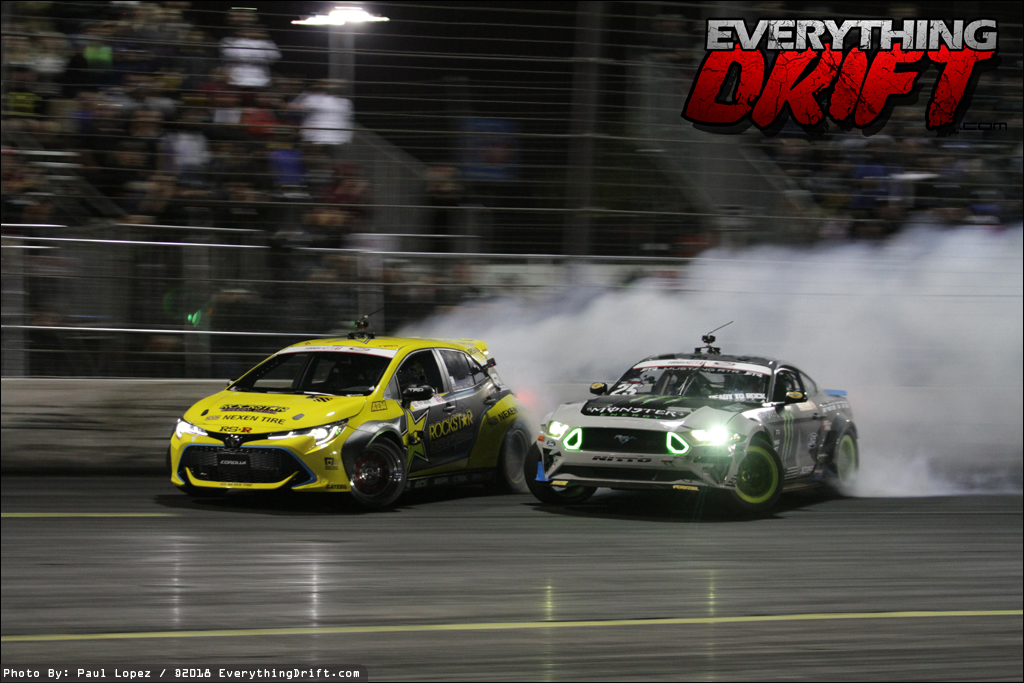 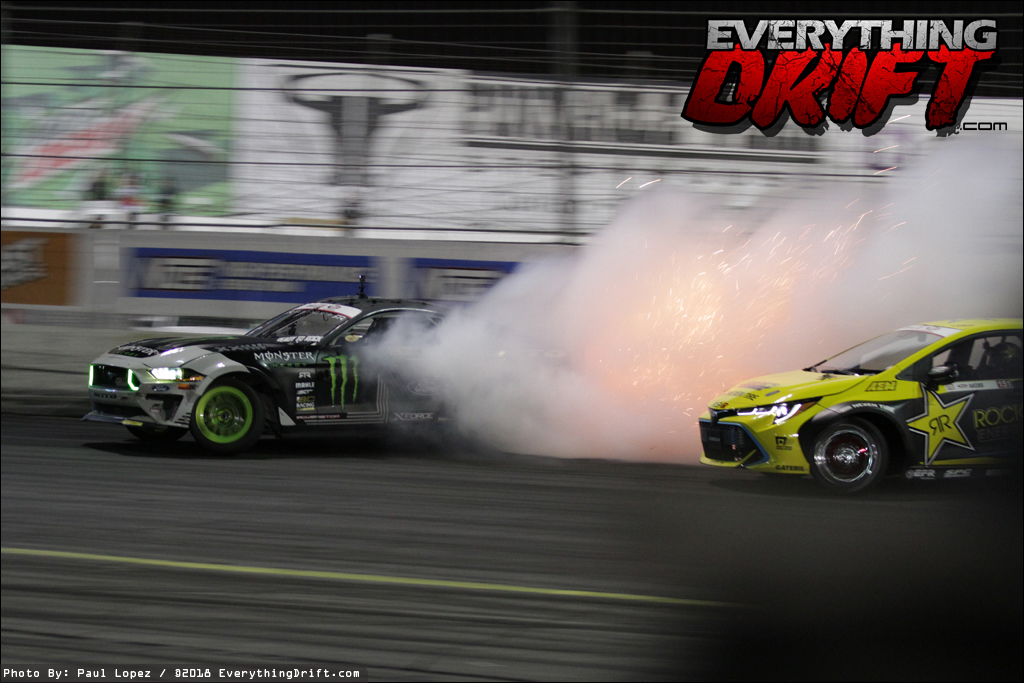 The battle of the champions was one for the ages. One driver looking to cap off a down year with a win and the other looking to take the championship. We all knew this was going to be a good battle, and boy did it not disappoint.  Both driver gave it their all  pushing the cars to the limits and showing why they are both champions. It would take 2 One more Times battle to decide the winner and the fate of the 2018 Championship. 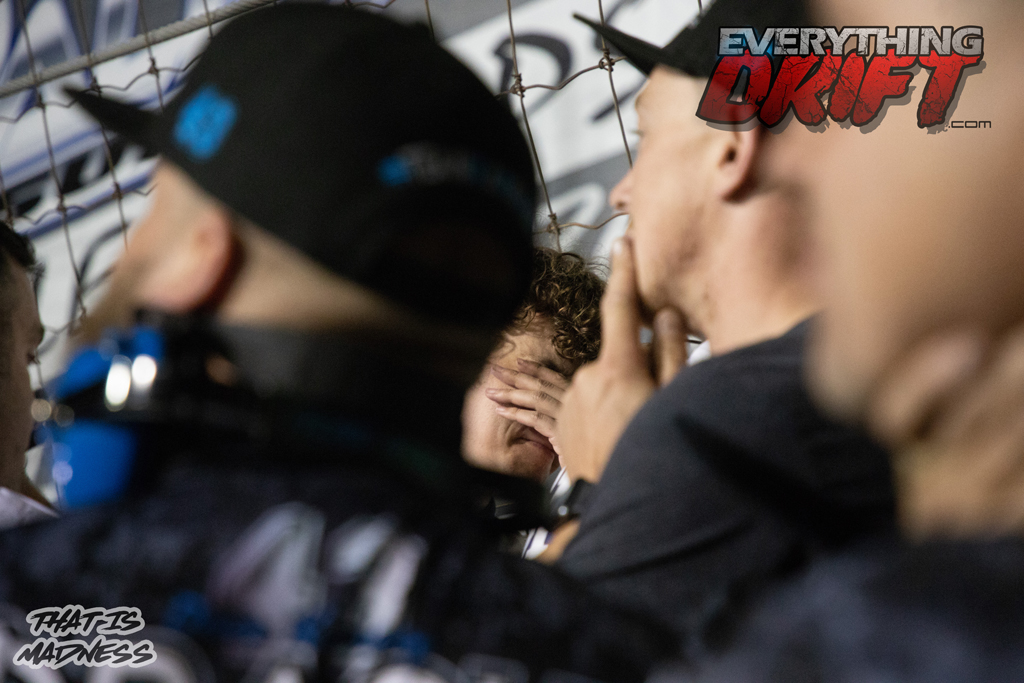 Piotr Wiecek #215 is stressing out with James Deane #130 while the battle for first place podium is taking place. If Fredric Aasbo #151 would had won against Vaughn Gittin JR #25, then he would have taken the championship away from James. The stress is too much considering that there where plenties of one more times. 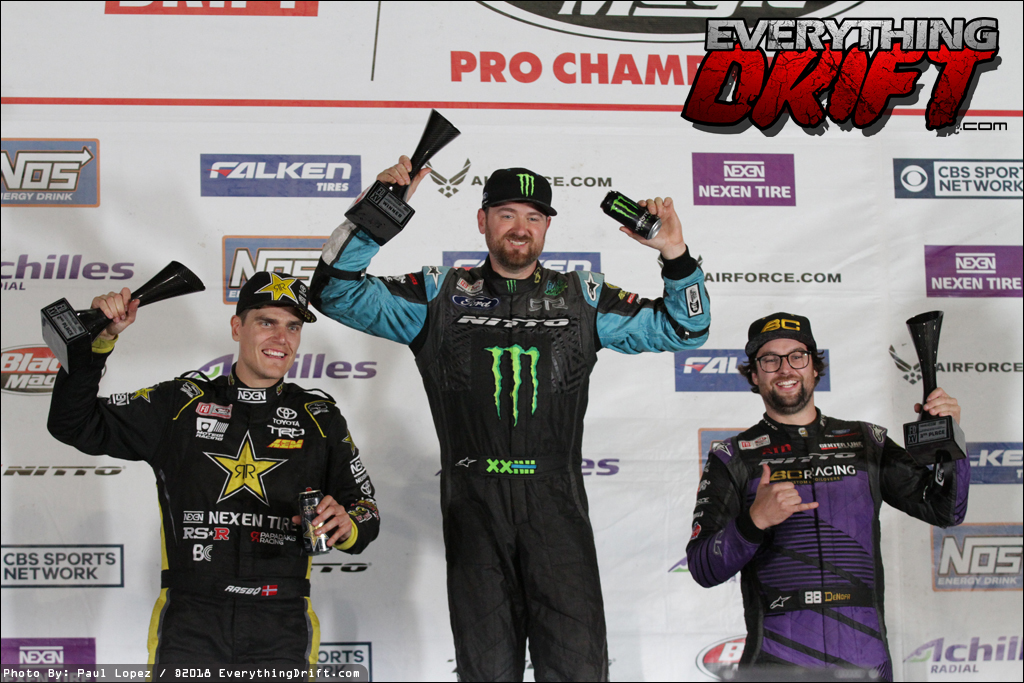 In the end Gittin would unanimously get the win over Aasbo and his RTR Team mate Chelsea DeNofa would take the 3rd spot on the podium.  Vaughn expressed his excitement on the win and turn around on the years bad luck Gittin- “What a wild fairy-tale night. This has been one of the toughest seasons of my drifting career and I’m just extremely grateful to the entire RTR team that has worked so hard with a never say die attitude.” 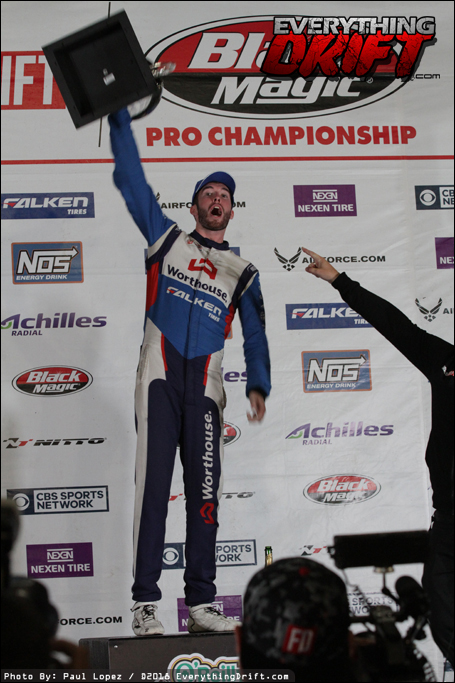 After anxiously waiting from the sidelines and having to watch Aasbo continue to move on to the finals, James was  finally able to relax. With Aasbo’s 2nd place finish James would be crowned the 2018 Formula Drift Black Magic Pro Championship Champion for the second year in a row. 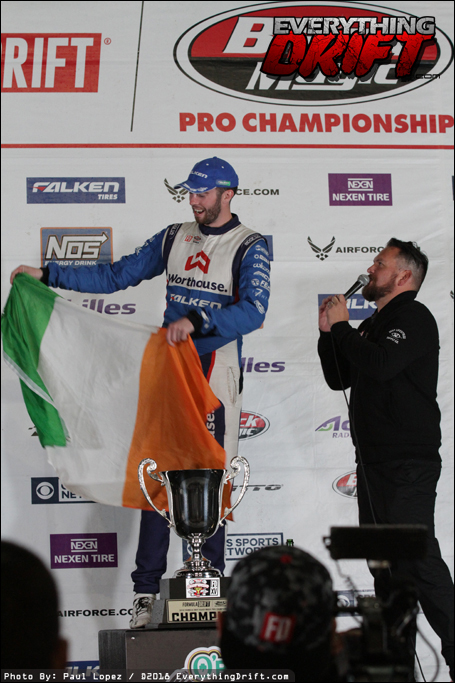 The Worthouse team was amazing yet again having their drivers Take the number 1 and  Third Spots in the championship. Will they dominate again next year or will we see another team step up and take the battle to them.  Now that the 2018 season is over we all get to take a little breather and charge back up for next year. SEMA will bring the announcement of the 2019 Formula D Scheduled as well and maybe some new builds or updated rides from the Drivers to hit the track Next Year.

Photos and write ups by Juan Estrada and Paul Lopez