There is no place like home, as we come back to the world famous “House of Drift” Irwindale Speedway to end the 2018 Pro2 session. Unlike the Pro drivers having 8 rounds throughout the year, Pro2 drivers only have 4 rounds. There is no room for error and anything can happen. Only the top 8 overall drivers will have the chance to get their Pro license for next year. 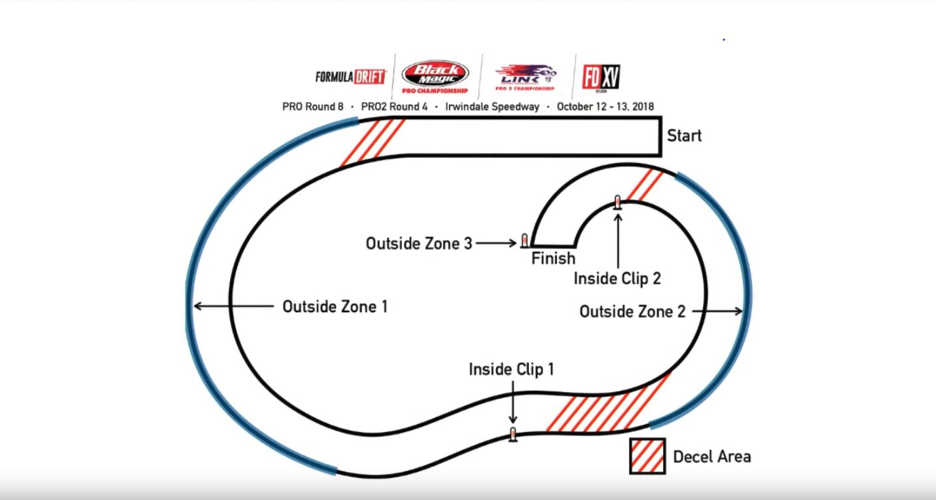 As expected, drivers started off strong as it was the last round of the season and they can afford to forgive. The outside zone 2 received the most love as it was where most drivers tap the wall. As it is a tricky transition coming from the inside clip making a S shape. 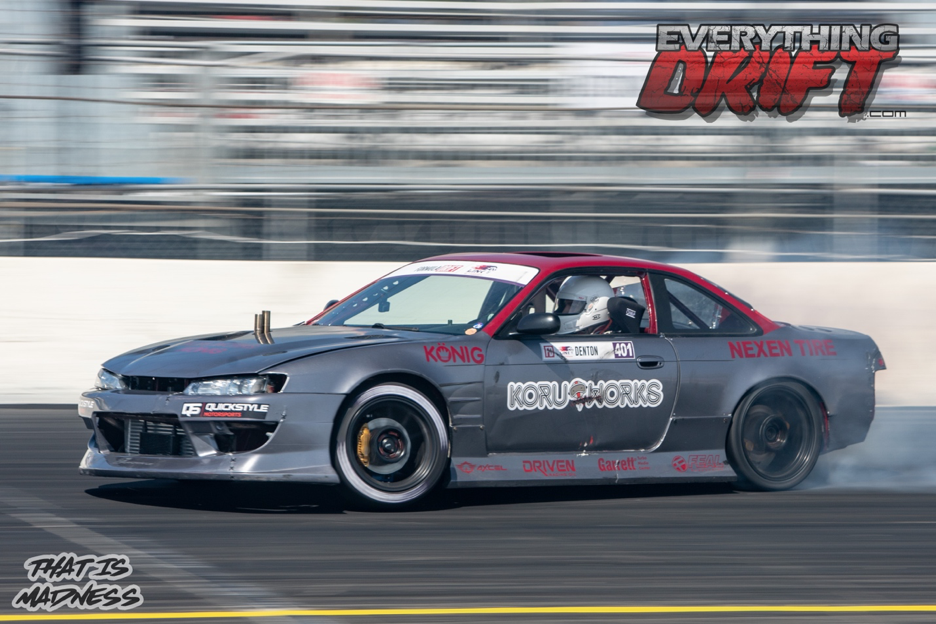 The average score was 75 points while Garrett Denton #401, is the only driver to hit the 90-point range, earning a 94 and qualified first. 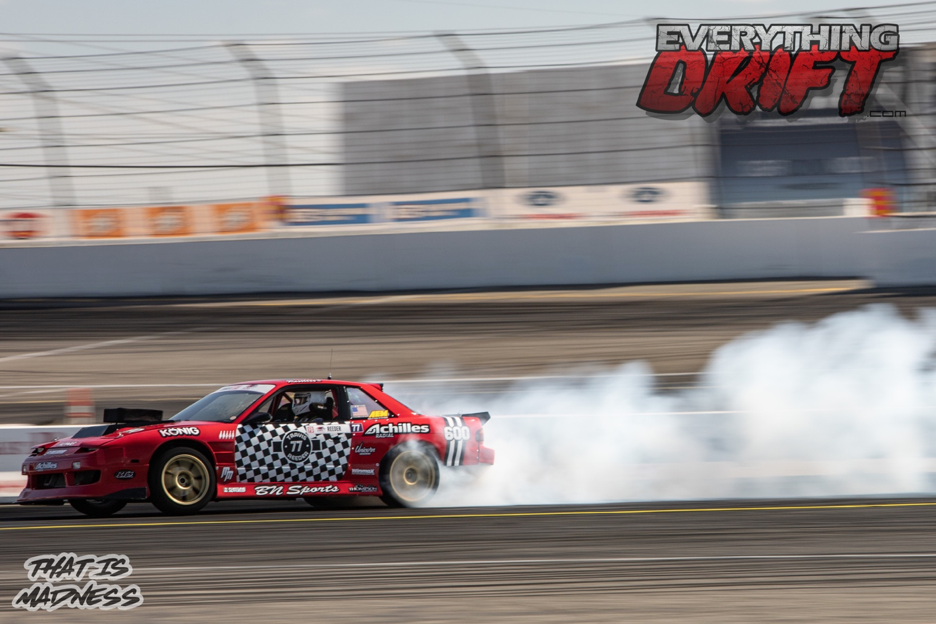 Travis Reeder #77, in the other hand started off as first place overall with a 20-point lead. He did not qualify for top 16 this round which meant that Dylan Hughes #129, has the chance to win the championship. 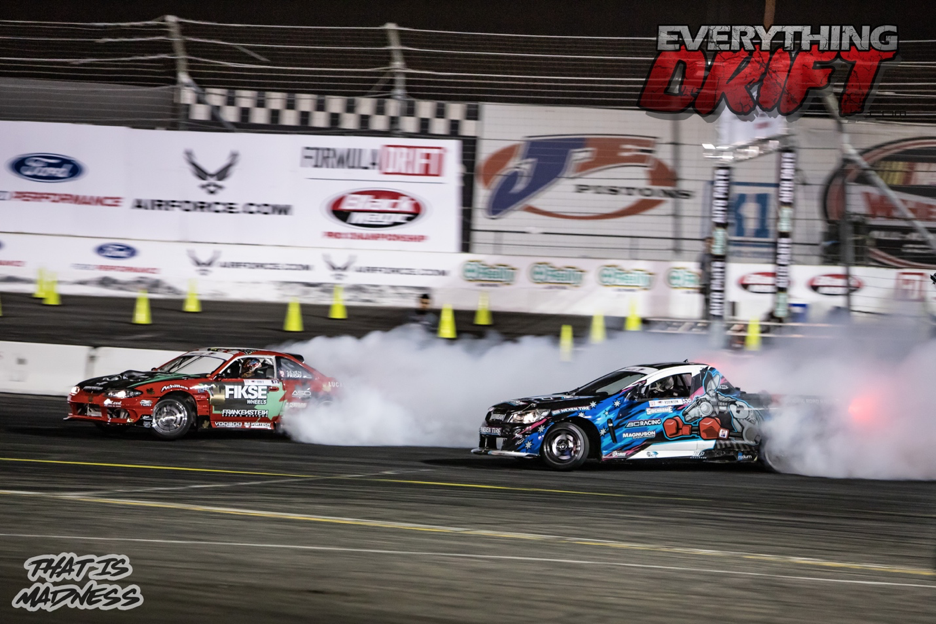 Josh Robinson #530, in his HSV VF Maloo, a vehicle not available in the country goes again Brody Goble #12 in his Nissan 240 V8. Brody took the win but only after 3 battle runs as it was a close match and all it took was a small mistake by Josh during his chase. 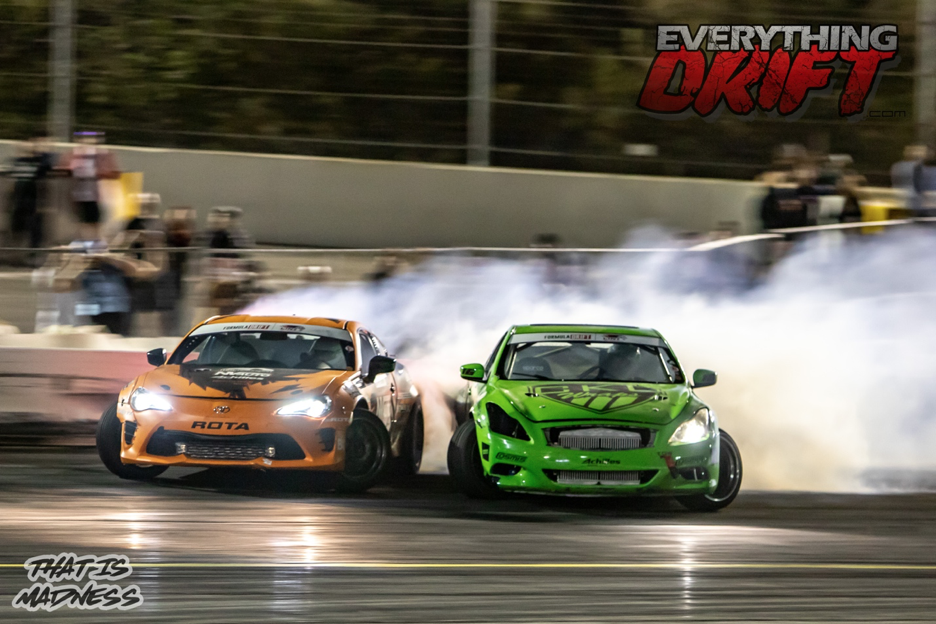 Jonathan Hurst #6, pushed too hard during the deceleration zone causing to have contact with Riley in the outside zone 2. Riley takes the win and moves forward to the top 8. 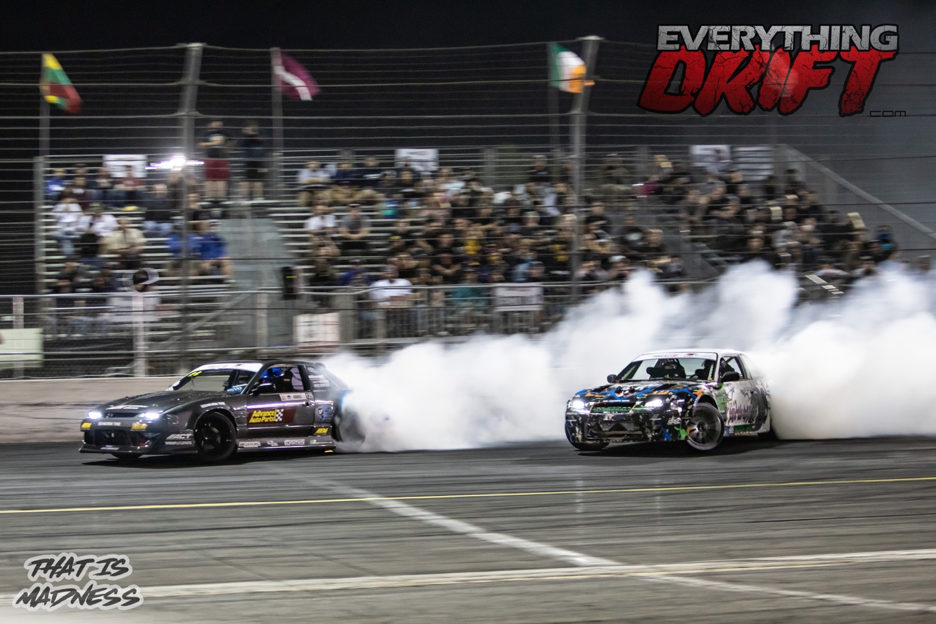 This was the battle everyone was waiting for, including Travis Reeder #77. Dylan Hughes #129, had to win this match in order to take the championship. Crick Filippi #55, took the win, saving Travis championship. 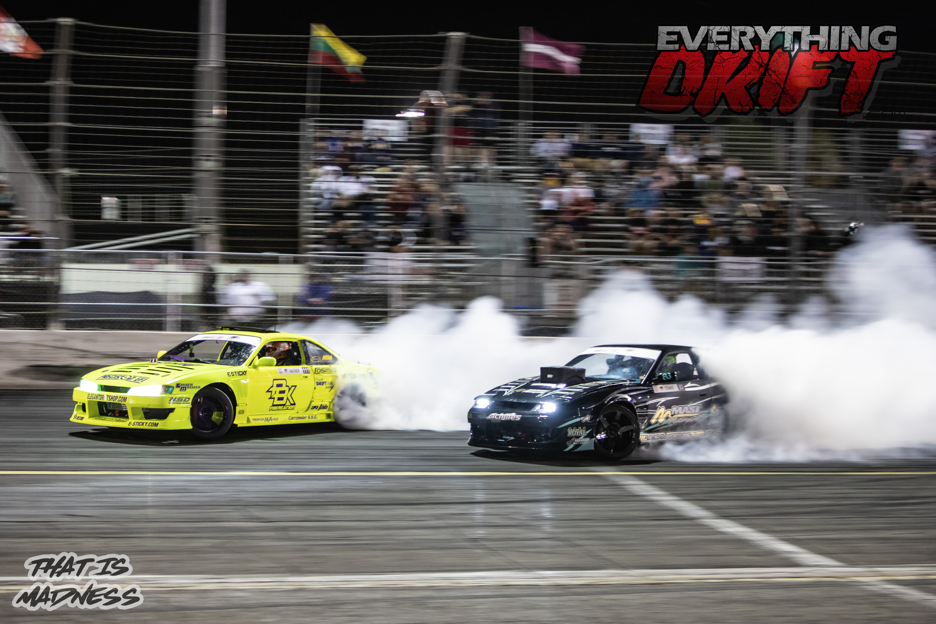 As the match was about to begin, we experience rain and lighting. Brandon Schmidt #83 hit the starting cone and was forced to restart but was not able to stop due to the track being slippery causing him crash on the outside zone 1. 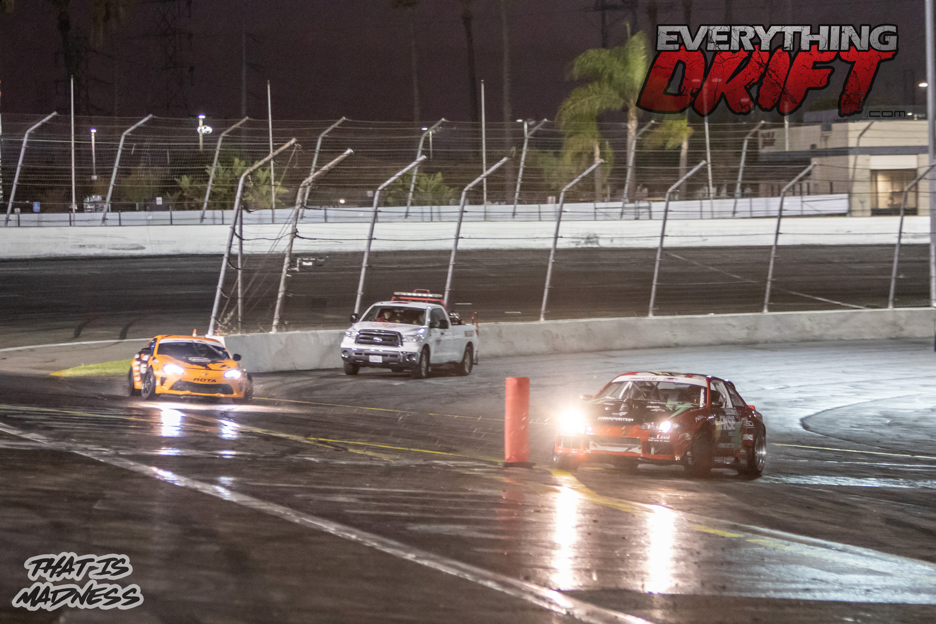 It is safe to say that the rain did cause drivers to slow down and become more cautious. The drifts are getting slower and the gap is getting bigger. 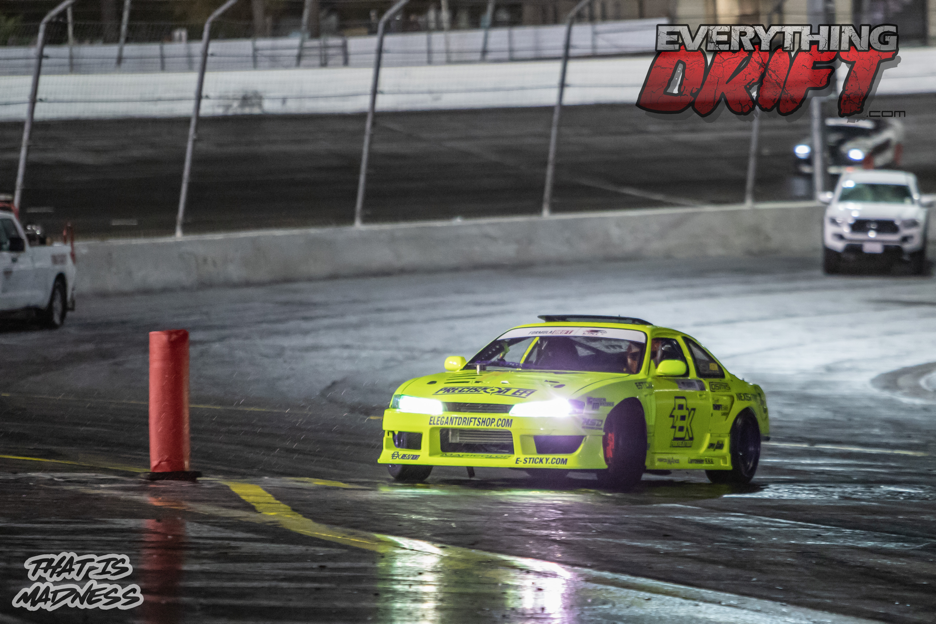 As the rain keep pouring down, it has been challenging for drivers to drift without having to correct them self. Trento Beechum #999 struggled during his chase run on the outside zone 1, as a result, Sebatian takes the win. 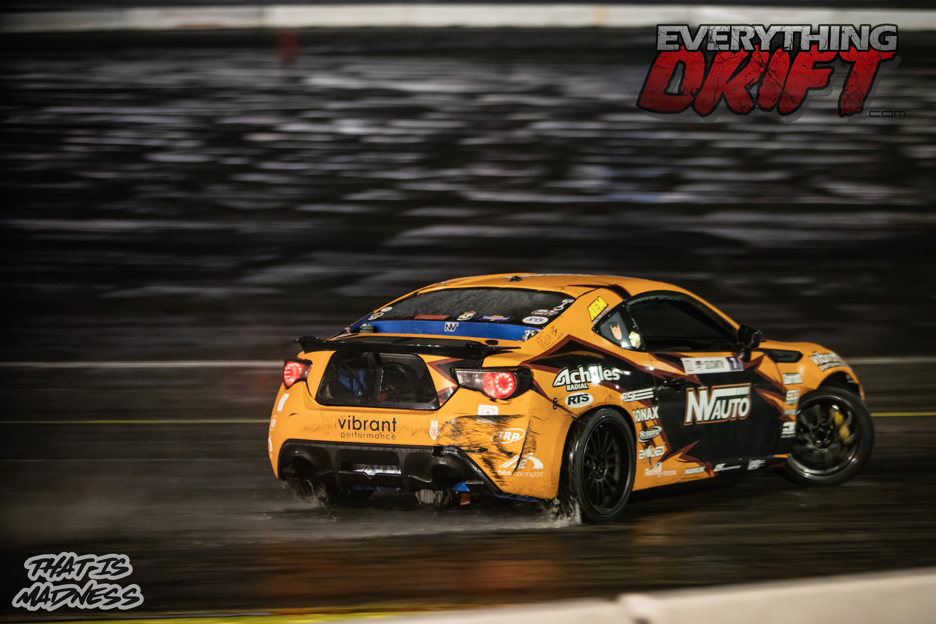 Crick Filippi #55 called for a 5-minute time out because his vehicle was not running. Unfortunately, his time was up, and his car was still not running which means that Riley Sexsmith #7 got a byrun took the win. Crick still takes second place overall. 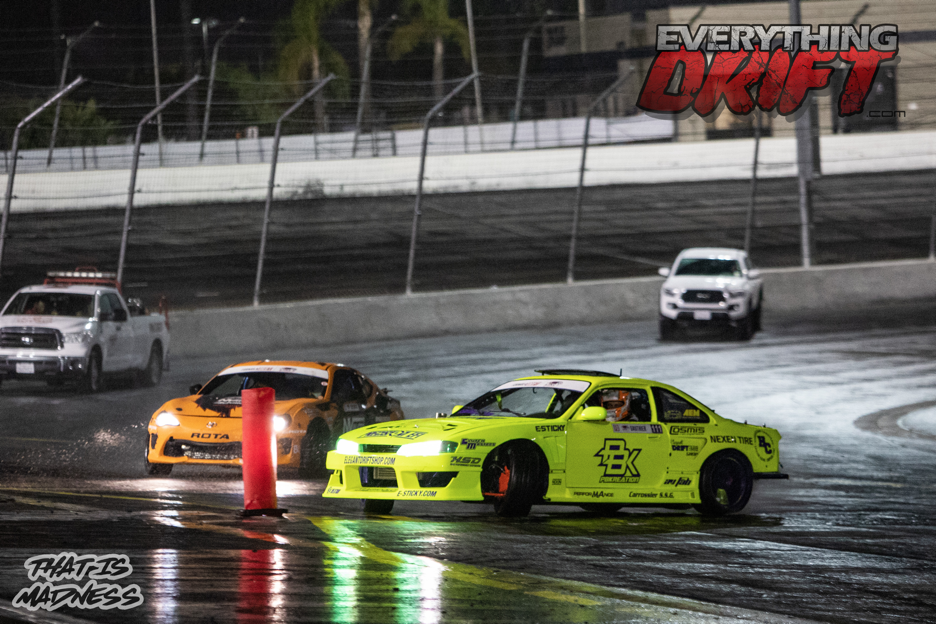 The first battle was a challenging decision between Sebastian #111 and Riley #7. The judges asked for a one more time. During Riley’s’ lead run, he slipped and crashes to the outside zone 1. His crash did major damage to his vehicle and a tow truck was needed to be moved. 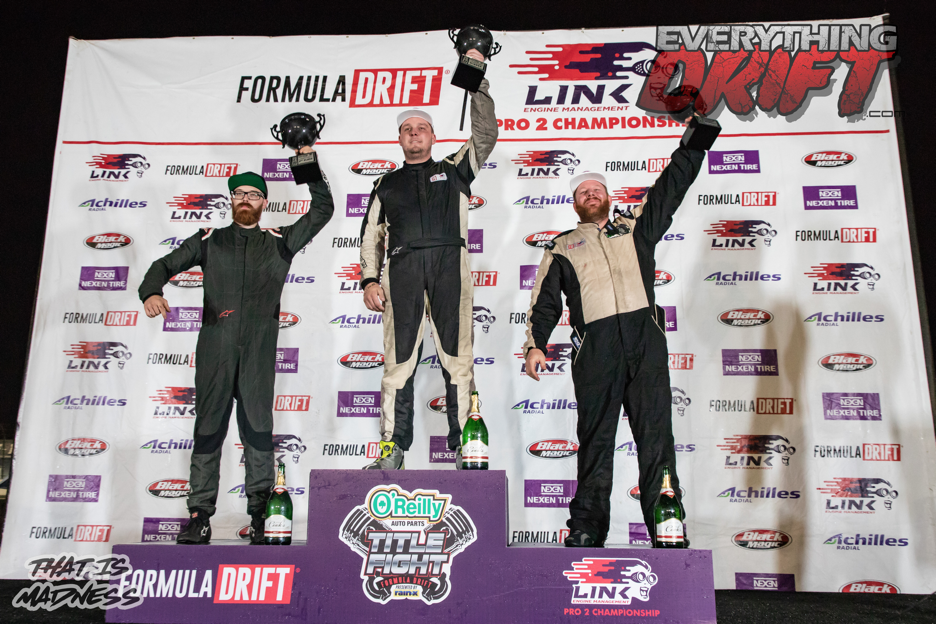 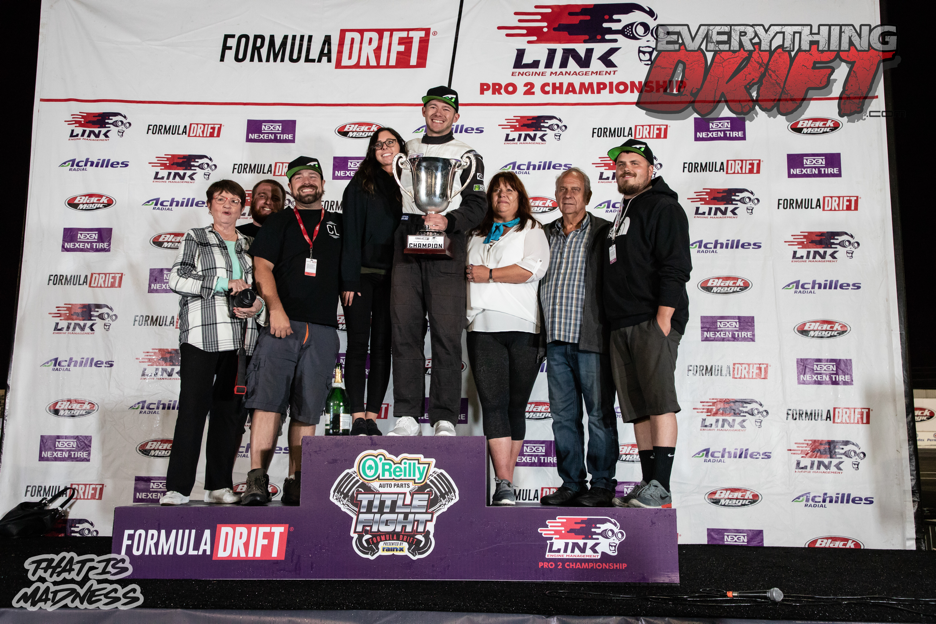 It was a tough and nerve wracking round but at the end, Travis Reeder #77 took the championship after almost losing it this round.

To view all the Pro 2 Category finishers, click here:
formulad.com/results/2018/irwindale/pro2