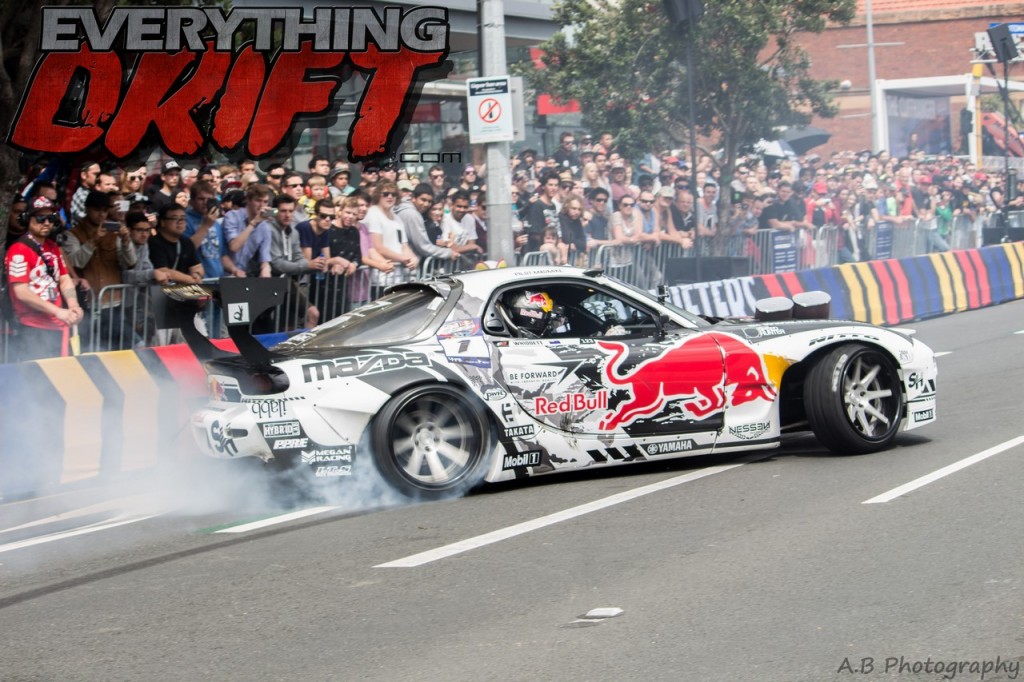 An overcast Saturday morning dawns in Auckland, New Zealand on the second RedBull #Driftshifters drifting competition. Imagine the basic game of pinball with the same extravagant sounds, lights and scoring but instead of a metallic ball you have a high horsepower drift machine piloted by some of the worlds best drifters who will battle against each other to score the highest amount of points while going through a pinball like course with combination scoring and a high rise truck. Scoring is done through infrared sensors positioned all along the course where drivers need to get as close to them as possible as well as activate as many sensors as possible to score points through combinations. Mad Mike the brain child of the event along with 15 others battled out over the course of one day to see who would reign supreme with previous winner Matt Powers hoping to keep hold of the number 1 spot.

Practice sessions kicked off with a roar as most drivers pushing their cars and skills to near 100% right out of the gate, that meaning there were some accidents that involved plastic barriers removing rear and front bumpers as New Zealand’s own Andrew Redward (in a lovely FC) and USA’s Tyler McQuarrie (Camaro) found out the hard way. 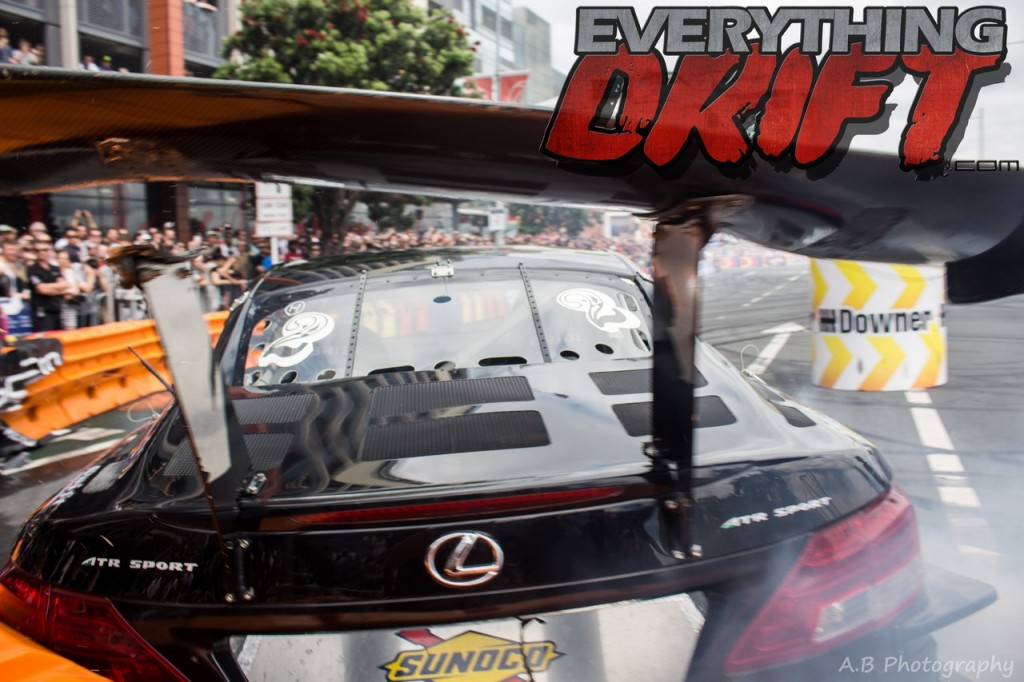 Through the day there were spectacular incidents that kept the crowed both amped and in wonder as to who would actually make the finals. Mad Mike impressively sent his fire breathing “Mad Bull” RX7 flying into a plastic water barrier leaving the left front control assembly in tatters and retiring the car early in the day but however proceeded to bring out “Bad Bull” the equally impressive RX8 and continue on. As the day progressed higher scores were being posted by the favorites such as Matt Powers, Mad Mike, Daniel Woolhouse, Ryan Tuerck, Diago Saito and Chris Forsberg.

After practice the drivers went out to set the highest score to proceed to the quarter finals. Out of the 16 drivers Matt Powers, Andrew Redward, Mad Mike, Chris Forsberg, Fanga’ Dan, Gaz Whiter, Ryan Tuerck and Diago Saito all made it through to quarter finals with Matt Powers setting the highest score of the day with 4,101,229 points. The battle for semi final spots were up next with the drivers pushing harder and closer to each sensor to collect as many points as possible. Sadly Andrew Redward retired his RX7 FC in quarter finals leaving only 7 to battle it out. 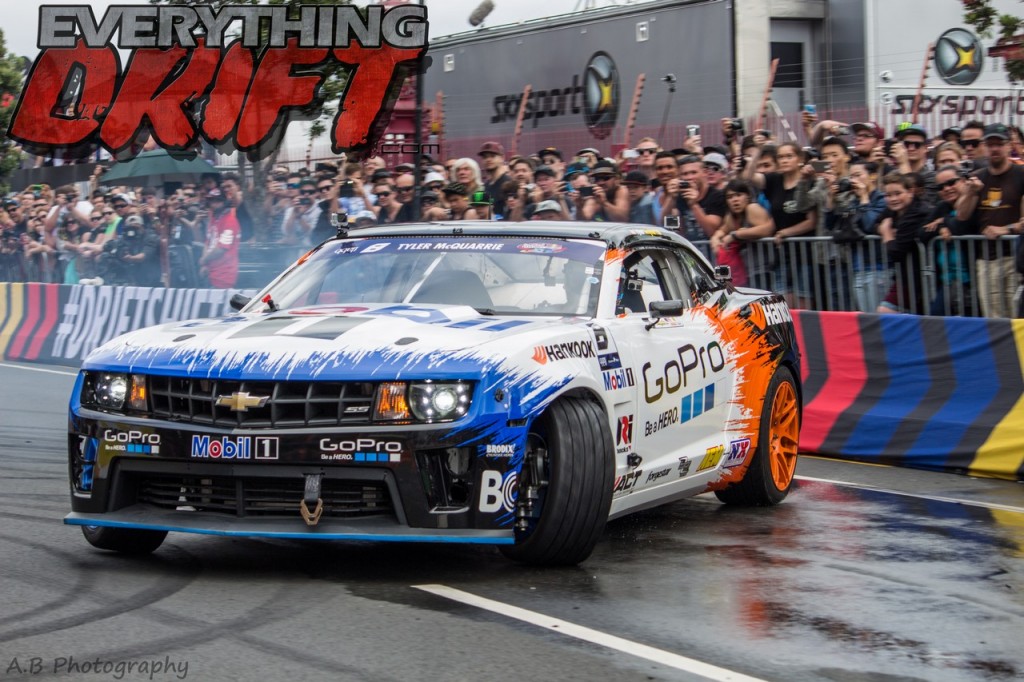 Out of the 7 from quarter finals Fanga’ Dan, Matt Powers, Chris Forsberg and Mad Mike made it through to the semi finals and the battles could not be closer with Fanga’ Dan and Mad Mike only separated by 59415 points while Chris Forsberg stormed through with 3,505,449 points. Sadly Matt Powers dropped out managing only 1,982,799 points meaning he was well out of contention. With semi finals out of the way and third place already decided it was time to see who would reign supreme between the fire breathing RX8 and the angry 370Z. 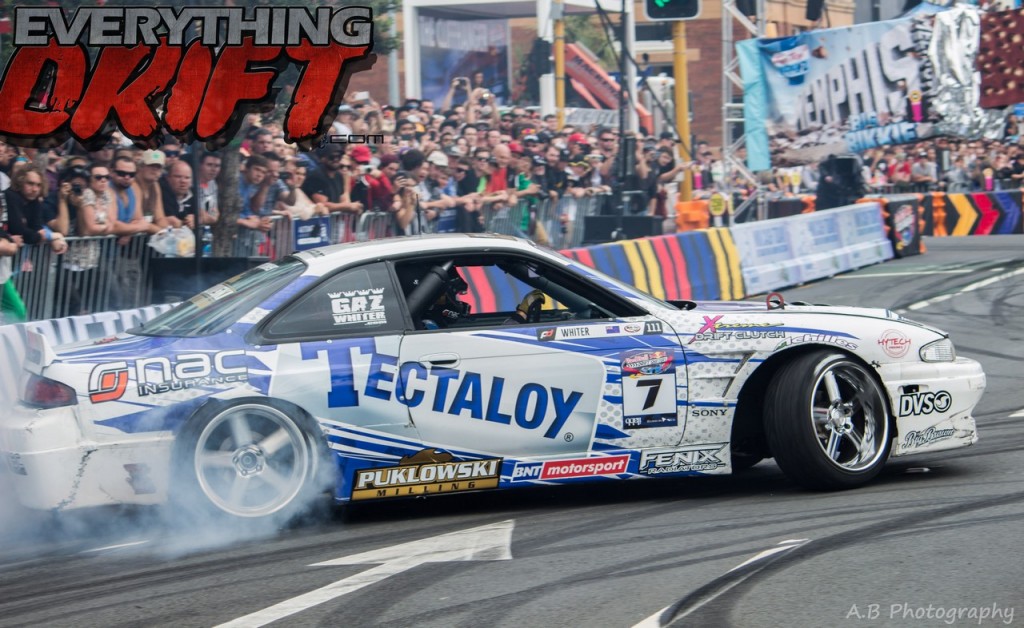 Finals had Mad Mike go first up and he was out to win, pushing the “Bad Bull” with pin point precision through each section and collecting every combination possible while still ensuring to please the crowd and finishing up with a impressive score of 4,012,088 points. Chris Forsberg had his work cut out for him and while he pushed the 370Z hard through the course he was unable to find the correct combinations and finished with only 2,650,885 points. 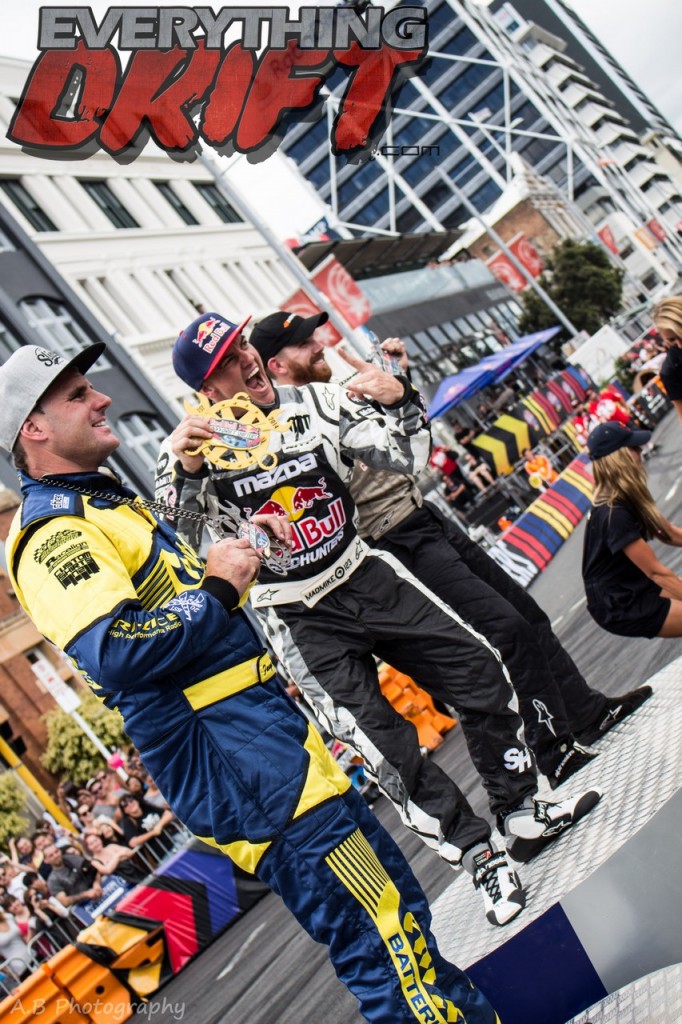 Overall the day was spectacular with a unique event of its kind that will surely only get more popular as the news spreads. Drifting globally is a culture now but drifting pinball is set to take drifting as a sport to a new global level and that can only be great news to the fans and drivers alike.