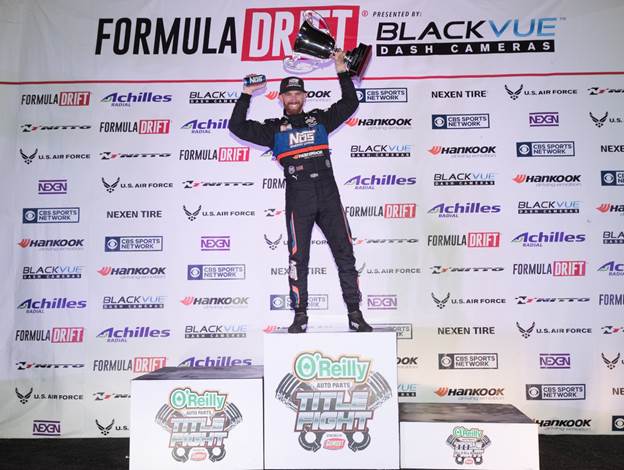 Nashville, TENN. – October 10, 2016 – Hankook Tire driver Chris Forsberg won his third career Formula Drift Championship following this past weekend’s final round in front of a sold out crowd at Irwindale Speedway. The final event of the season caps a historic run for Forsberg who reached the podium six out of the eight events this season.

Racing in his signature Hankook Tire/Nissan 370Z, the veteran driver entered the final weekend of the season with a 36-point lead over the rest of the field. The cushion helped secure the championship finish despite an early exit in the Round of 16 on Saturday.

“The 2016 season is finished, and I’m so excited that we secured the championship,” said Hankook Driver and Formula Drift Champion Chris Forsberg. “I can’t thank Hankook Tire enough for providing me with incredibly consistent tires and support which helped my steady performance all year.  This is my third championship season since joining the Hankook team, and it has been such an incredible partnership.”

In addition to Forsberg’s success, Hankook’s young and talented driver Ryan Tuerck captured his first podium finish of the year after battling his way to third place.

“This weekend was such a great way to finish off the 2016 season,” said Tuerck.  “The difference that helped me podium this weekend was my ability to create smoke and maintain exceptional grip with my Hankook R-S3 tires.”

In just its 13th season, Formula Drift continues to grow in the U.S., and Hankook Tire has been a driving force in the success of the sport and earned its second consecutive championship this weekend.

“Irwindale was a roller coaster event that kept the championship battle interesting and fans on their feet,” said Donato Bonacquisto, Hankook Tire Motorsports and Events Manager. “In the end, Chris took home the Formula Drift Pro and World Championship titles, and Ryan finished on the podium so we couldn’t be any happier to finish off the season on top and maintain the overall championship title.  What an amazing and consistent season we’ve had with at least one Hankook driver on the podium for seven out of the eight events this year, continuing our championship streak. It has been an amazing year for our team, and we look forward to defending our championship again in 2017.”