So with all the hype and changes that were around the British drift championship for this season we were eagerly anticipating BDC Round 1, having had a successful test day with our new Achilles Radial Tires. We were ready to rock! #Syril has had a few minor adjustments in the off season changing up to thicker 5 bolt Nissan Skyline shafts, new decals along with some extra aero namely the front splitter & top rear window spoiler – with thanks to EP Racing for the products & DLR Motorsports for fitting & making Syril look even more aggressive! 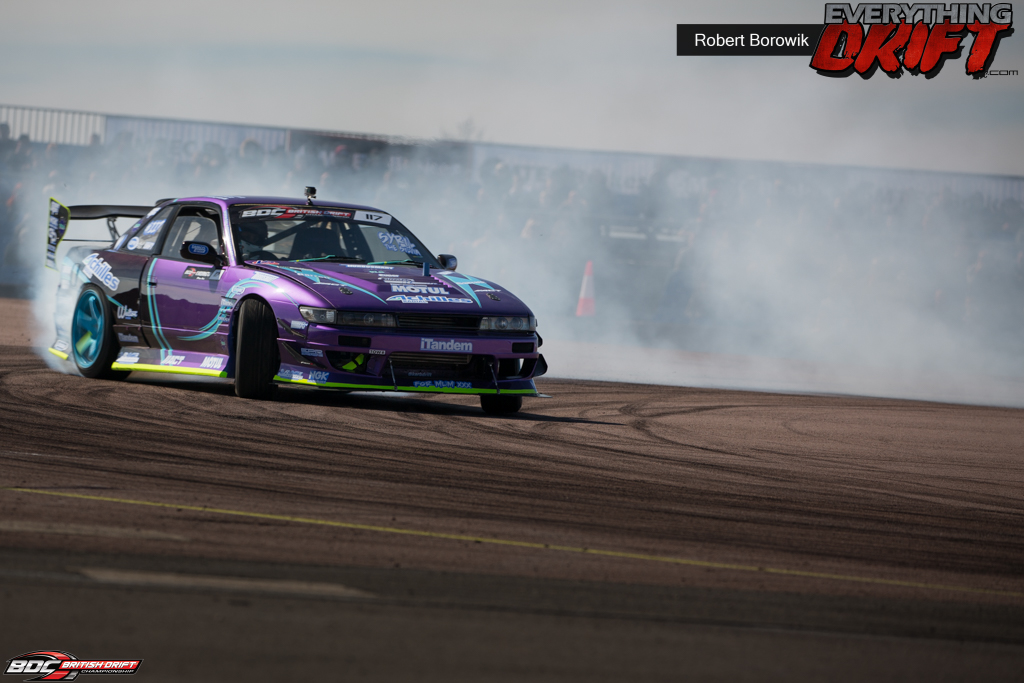 Thursday night saw us attempting to load up Syril and found a brake seized, upon further inspection Syril had other ideas about attending BDC Round 1 as his O/S/F brake caliper had seized on and was leaking, however undeterred we carried on to load him onto the trailer followed by social media posts to obtain a replacement caliper at the event. We arrived at Rockingham late Friday afternoon sadly no caliper was going to be with us until the Saturday morning, praying it was going to arrive early so as not to miss much practice time.

I never normally pray for rain as I much prefer drifting in the dry to have speed, grip & smoke – however as we have only managed to have one practice day with these new super sticky Achilles Radial Tires in the wet and they were like drifting in the dry I was praying for Saturday to be wet, however my prayers were not answered on this occasion and it was bone dry so David from DLR Motorsports adjusted the tyre pressures and the suspension set up on Syril to suit the conditions. By the time the caliper arrived on Saturday morning & the boys then had issues with the banjo bolt and washers so again turning to the drift family we managed to source these extra parts needed to get us out into the practice session. 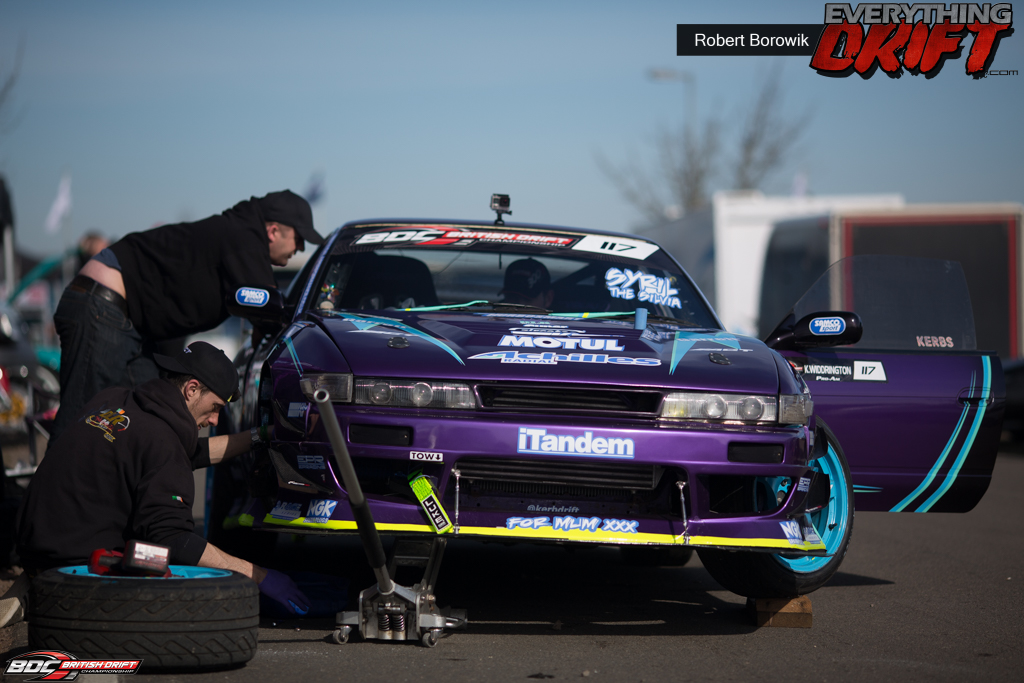 Once the caliper was fixed we headed to the queue to wait to get out for practice unfortunately BDC had ruled that the track needed adjusting for Spectator safety this added a further delay meaning in the three hour practice session we only managed to achieve 2 & 1/2 laps. 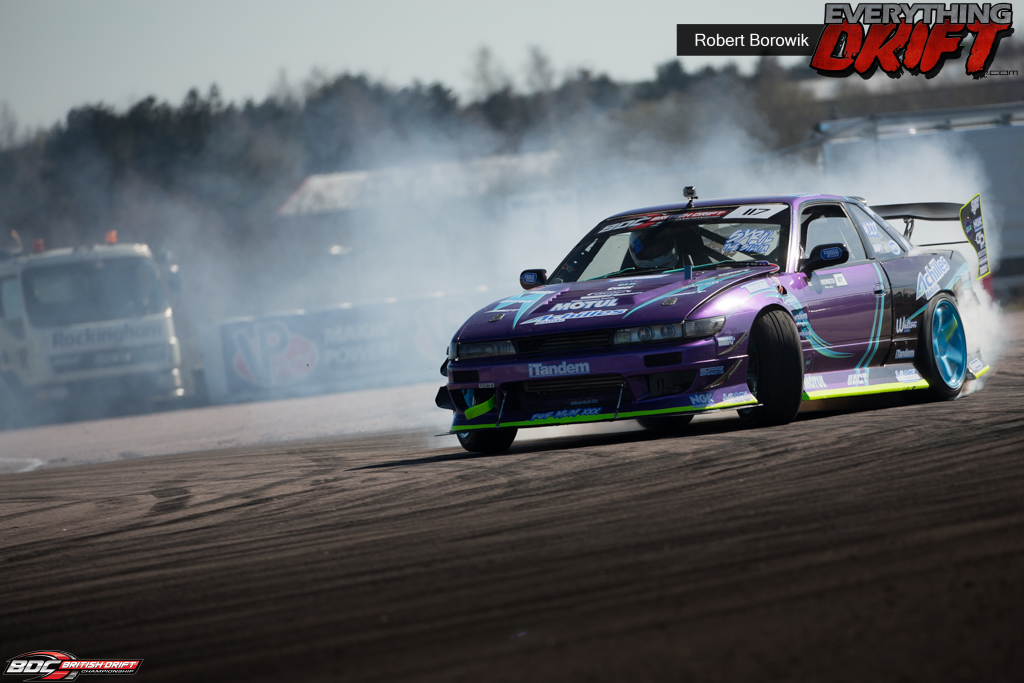 Syril then went on to throw a further hissy fit when we pulled in between laps 2 & 3 due to a helmet visor issue needing adjustment, and then he decided that his sump plug was going to
vibrate loose and drop most of his engine oil right in front of our pit area. Thankfully for the haste of the team shouting at me he was switched off 2 seconds or so after they spotted it.
New sump plug & washer fitted along with the fantastic Motul Competition 15w/50 oil & turning of the key was a heart stopping moment but thankfully there appeared to be no damage as it was caught swiftly (now Syril’s sump plug will be wired from now on) It was simple – Syril was not winning this battle he appeared to have this weekend & would go to the ball (aka qualifying) but hey “that’s Motorsport” & these things are sent to test us. 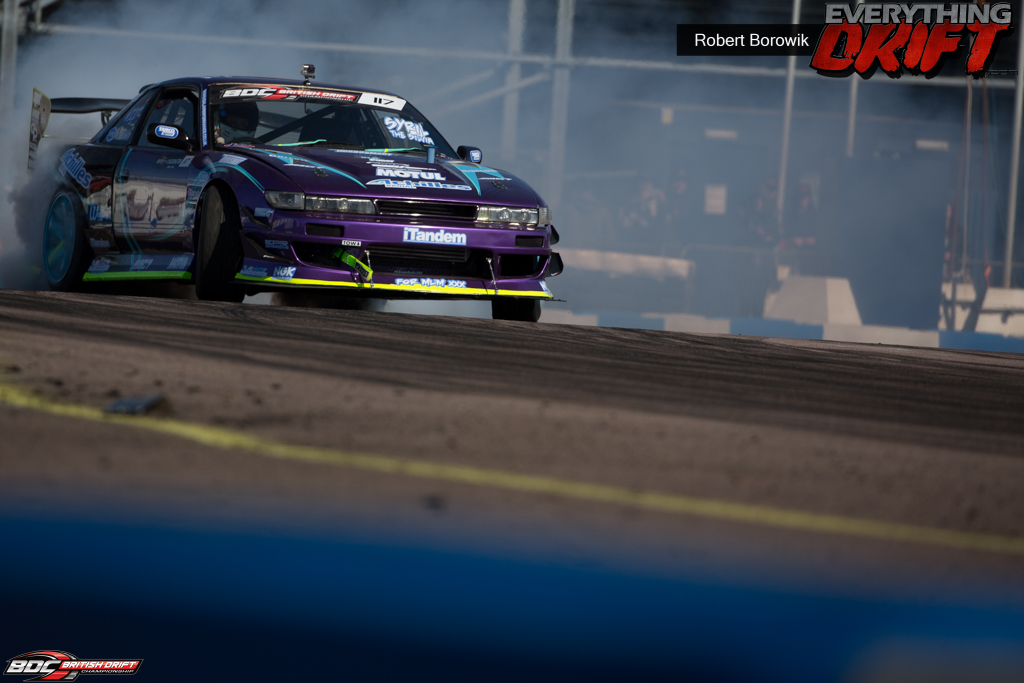 So with only 2 1/2 laps under our belt off to qualifying we went, I wasn’t massively confident due to the fact that this track was actually very technically tricky due to its undulations and that on some of the clipping points you couldn’t see the next clipping point to plan your racing line so in certain areas it was very “adhock” & adjusting as you got there. 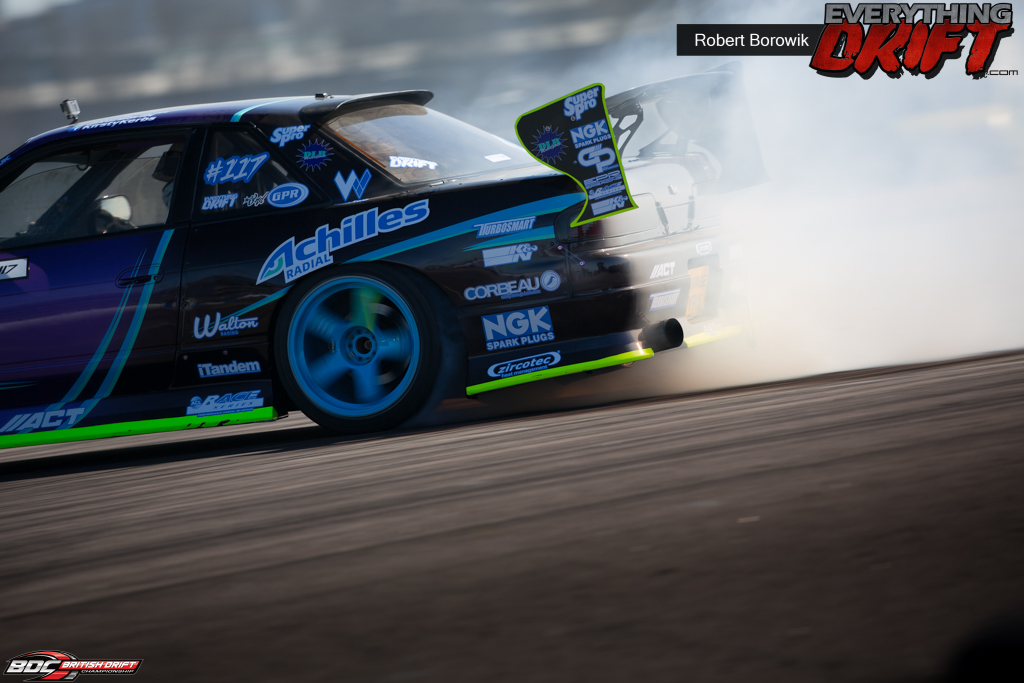 However I managed to keep my cool with the new Walero temperature regulating race wear. After our first qualifying run we were sitting in 12th place which I was happy with but always room for improvement so on my second run I pushed harder and ended up having to make a few corrections thus meaning that my first run was the better out of the two, earning me 20th position at the end of qualifying. 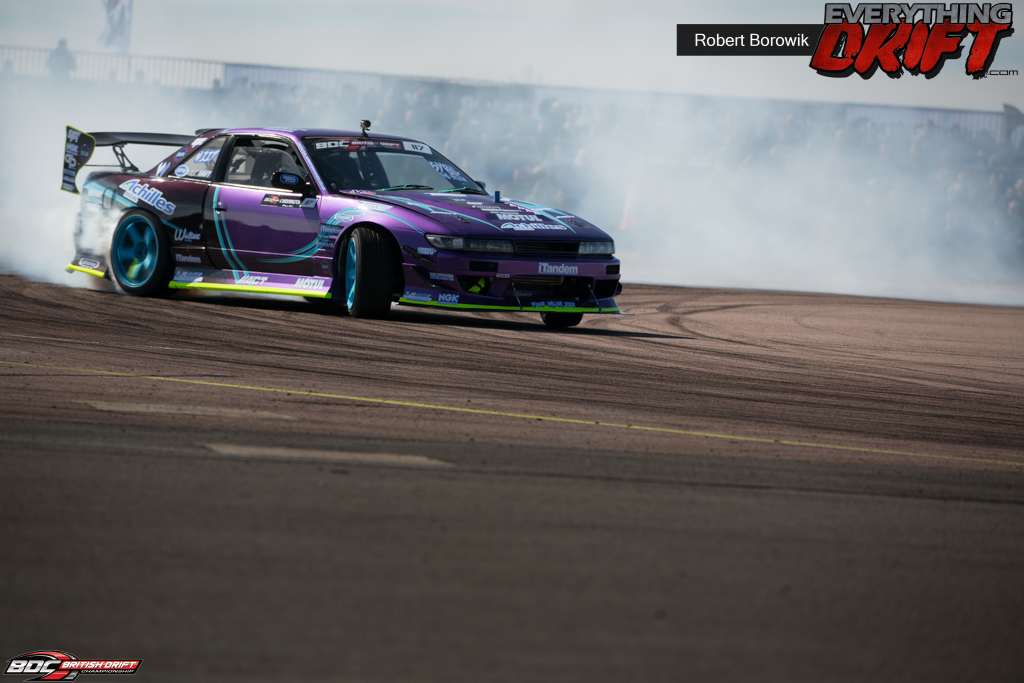 Top 32 battles started & I was up against Nick Brady. I was the chase driver for the first run having been advised by my spotters to leave a gap I felt I had however in hindsight (as wonderful as it is) this gap was not enough as just into the first corner we swiftly caught up with him, realised I was still catching him due to these amazingly grippy Achilles tires so dialled on more lock & was still catching him so more lock once again. 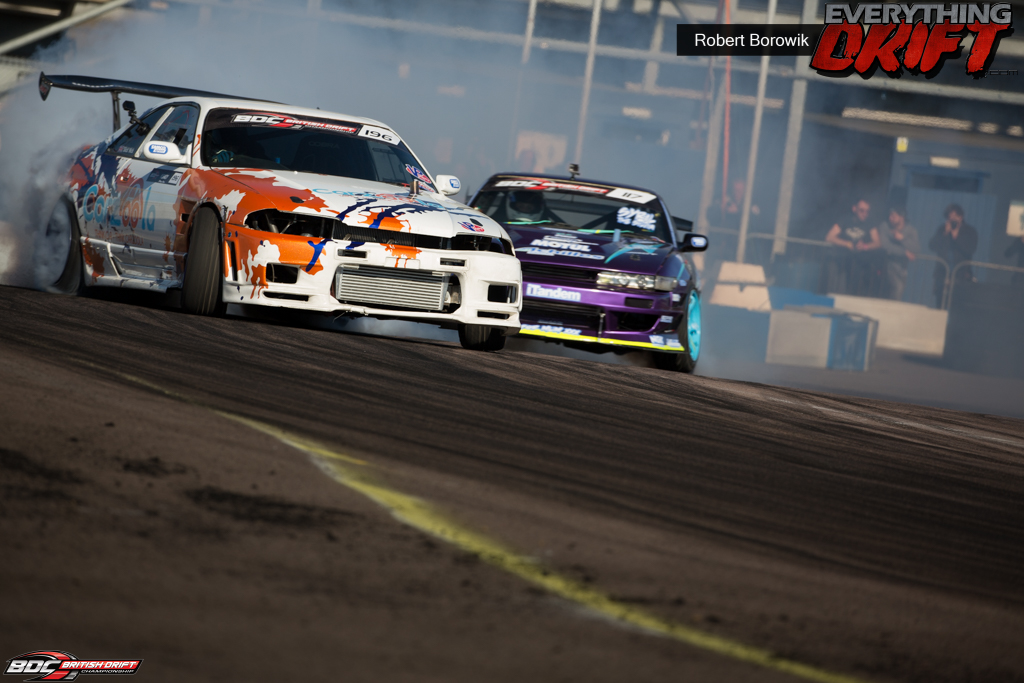 I had to adjust my line in this chase run & this caused a large deduction on my points. This was a great shame as my lead run was very good & we managed to pull a rather large gap on Nick unfortunately this was not enough to counter the adjustment of my line in the first run so sadly that was us out of the competition & Syril back on display in the paddock area. 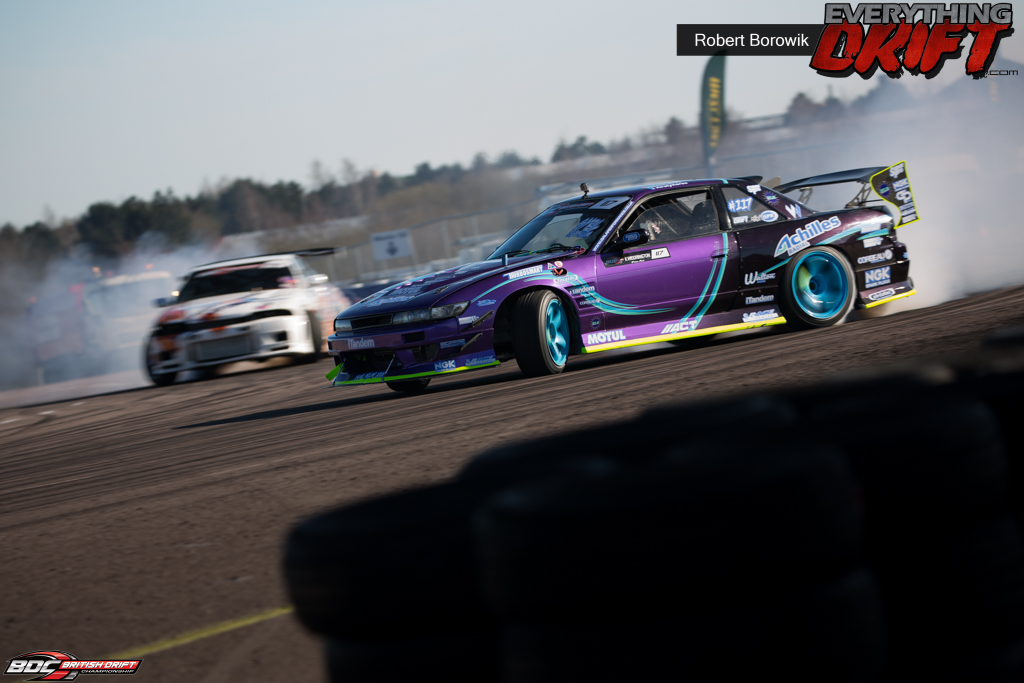 I am confident that with more seat time on these tyres myself & Syril will be a force to be reckoned with this season & we are looking for those podium spots – have no fear!!!

On the Sunday & with the new format for BDC there was a “crowd entertainment” section in-between the pro battles which meant that I could get back out onto track, stretch Syril’s new booties once again & show Syril off in the “Big Entry” show – this was much fun & after the event we had even more people coming along & talking to us in the paddock. 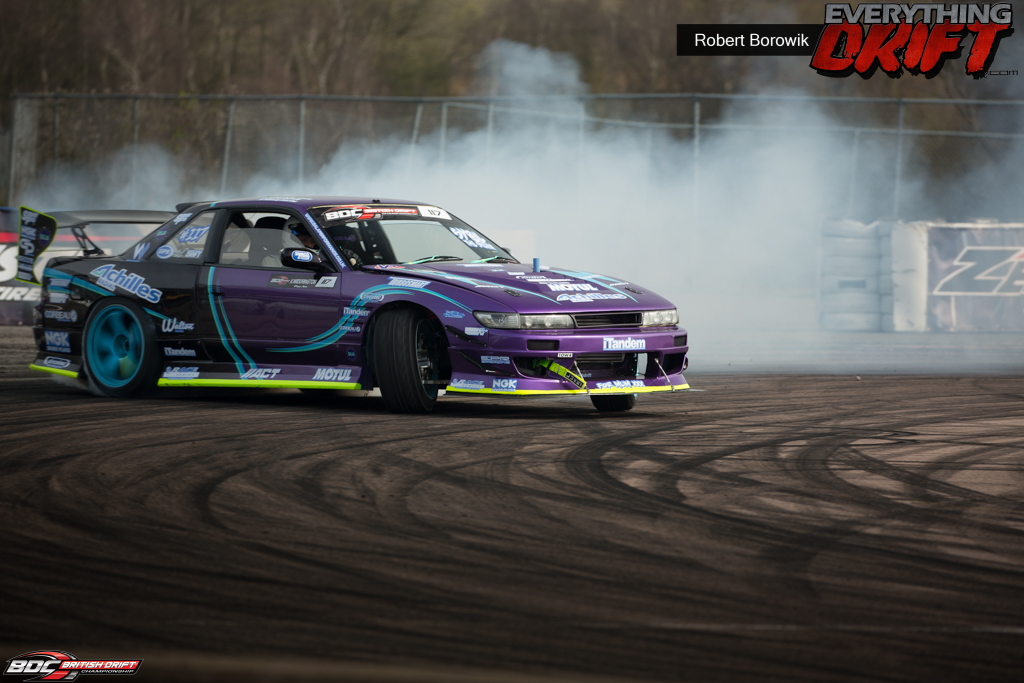 I would like to thank each & every one of my sponsors for their help & support with myself & “Syril” this year, without them we would not be able to stay out in competition & take it to the boys and for this I am truly greatful.
• ACT
• MOTUL
• WITHAM GROUP
• ACL RACE SERIES
• TURBOSMART
• ACHILLES RADIAL
• DK DEVELOPMENTS
• NGK SPARK PLUGS
• ITANDEM DRIFT
• K&N FILTERS
• GALA PERFORMANCE
• DLR MOTORSPORTS
• EVERYTHING DRIFT
• SUPERPRO SUSPENSION
• CORBEAU
• EP RACING
• WALTON MOTORSPORT
• WALERO MOTORSPORTS
• GRAND PRIX RACEWEAR
• ARP 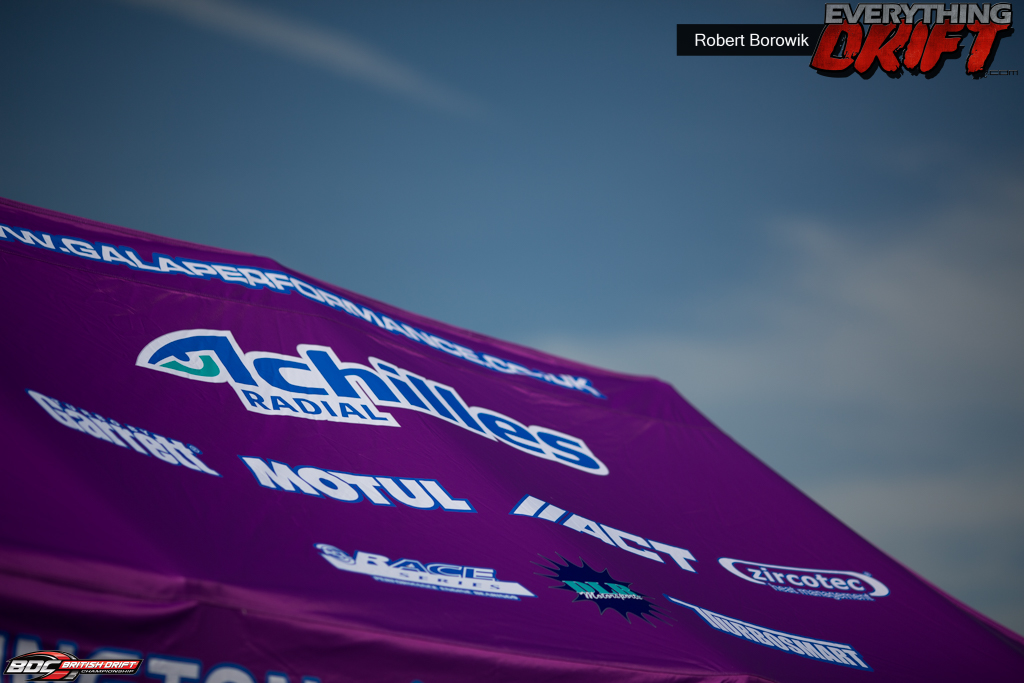