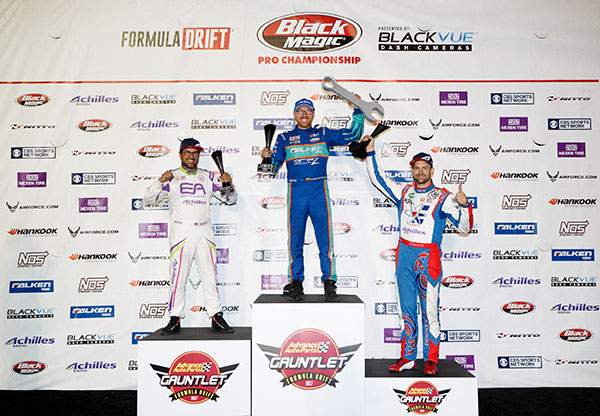 “As we hit the half way point of the season, there’s still plenty of action left,” said Jim Liaw, president and co-founder of Formula DRIFT. “These are the best drifters from around the world and the championship is still up for grabs.”

The Advance Auto Parts Round 4: The Gauntlet showcased tough competition throughout the event weekend. Over 1 million viewers tuned into the Livestream to watch the exciting action.

The Final 4 pitted Michael Essa in the Achilles Tire / Essa Autosport BMW M3 against Kristaps Bluss in the HGK / Mast / Motul / Wisefab BMW E46 on one side of the bracket. The battle of the BMWs went to the 2013 champion, Essa as he took advantage of a mistake by his opponent. Bakchis was set to face off against Matt Coffman in the Nexen Tire / Coffman Racing Nissan 240, but after failing to repair his vehicle within the allotted 5 minutes, Coffman had to bow out giving Bakchis the win. In the final battle, Essa faced off against Bakchis, with the first run being a very competitive outing. The second battle ended in dramatic fashion as Essa’s tire debeaded coming off the bank and Bakchis’ motor gave out just as he crossed the finish line. Bluss rounded out the podium in third place for the second consecutive event.

“I feel amazing. It was a very hard battle for us the whole weekend,” said Aurimas “Odi” Bakchi, winner of the Advance Auto Parts Round 4: The Gauntlet. “We had lots of challenges, but my crew pulled it together and allowed me to drive like an animal and kept my car somewhat together just enough as it literally blew up right at the finish line. The timing couldn’t have been better and I couldn’t be happier.”

The action continues to Round 5: True North at Autodrome St-Eustache in Montreal, Canada on July 15-16. For more information visit, www.formulad.com and find Formula DRIFT on Instagram @formulad, Facebook www.facebook.com/formuladrift, Twitter @FormulaDrift, and Snapchat – formula_drift. Tune into Formula DRIFT on CBS Sports and check your local listings for airtimes.