My build up to the BDC Round one wasn’t what I could have hoped for after becoming ill at the beginning of the week. Luckily the S13 only needed a few little finishing touches before heading to Rockingham. 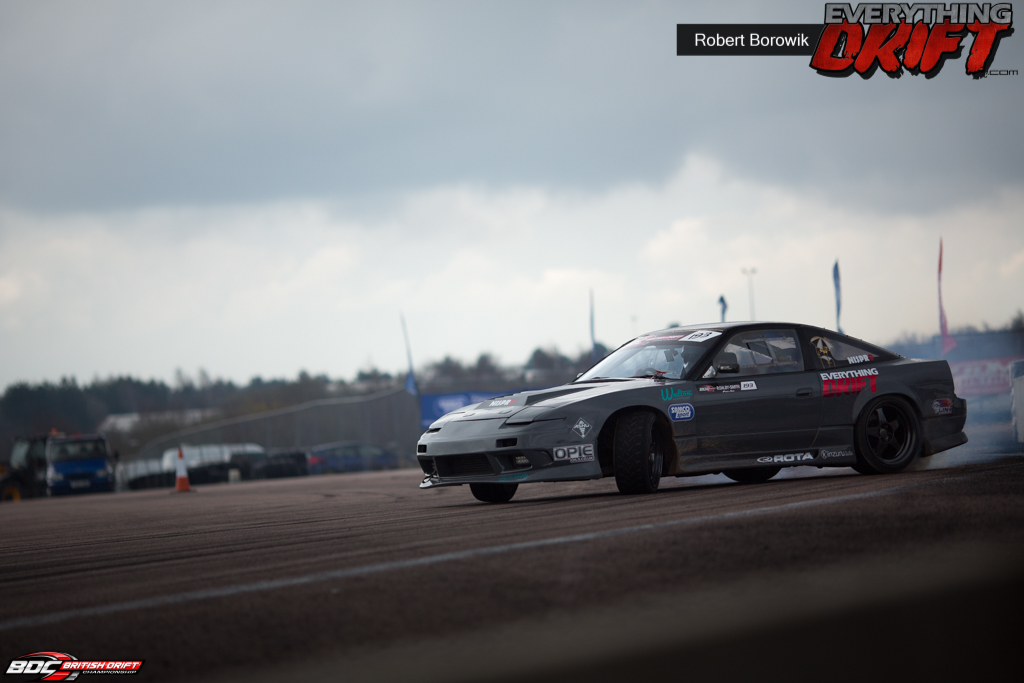 I struggled in the first half of practice with trying to get the car to pull 3rd gear, I put this down to the fact the Tri-Ace racing king were actually a lot grippier than I had expected so I started upping the tyre pressure but this still didn’t help. 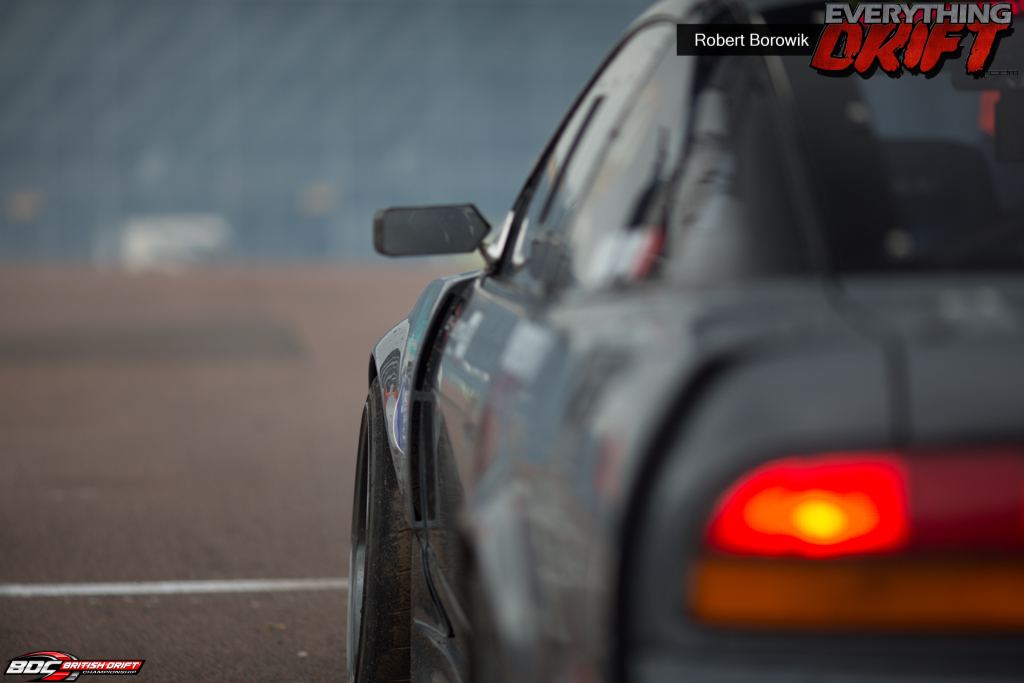 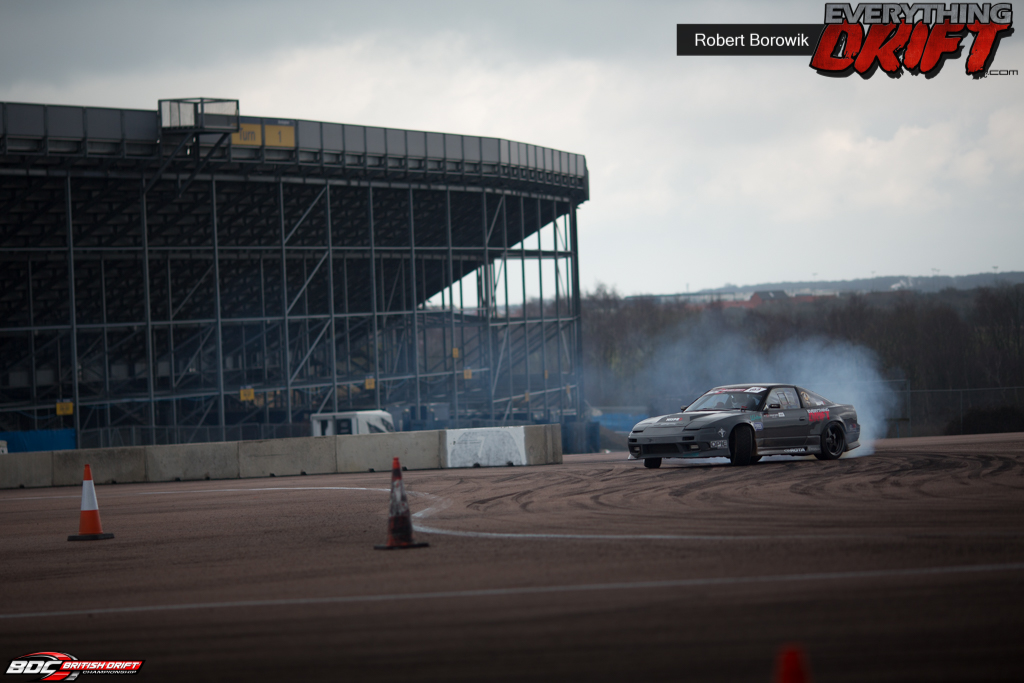 In the end I opted to lower the pressures and use second gear for the whole track. Now I could get the line worked out. 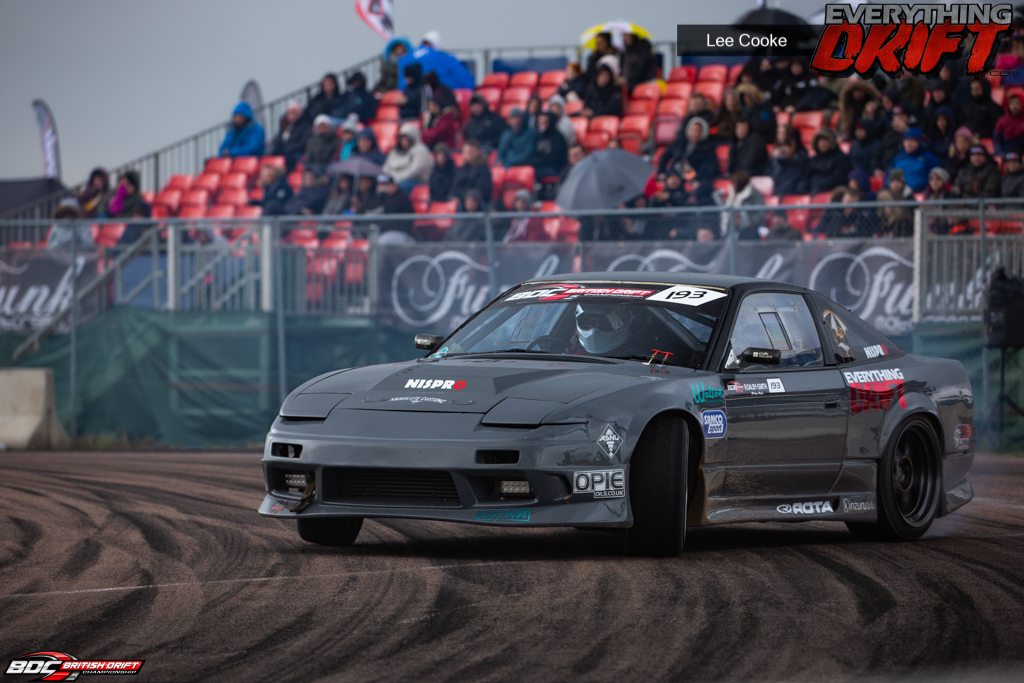 Qualifying came and I did a reasonable first run getting a 57, pretty safe and I could push the limits a bit more on the next one. 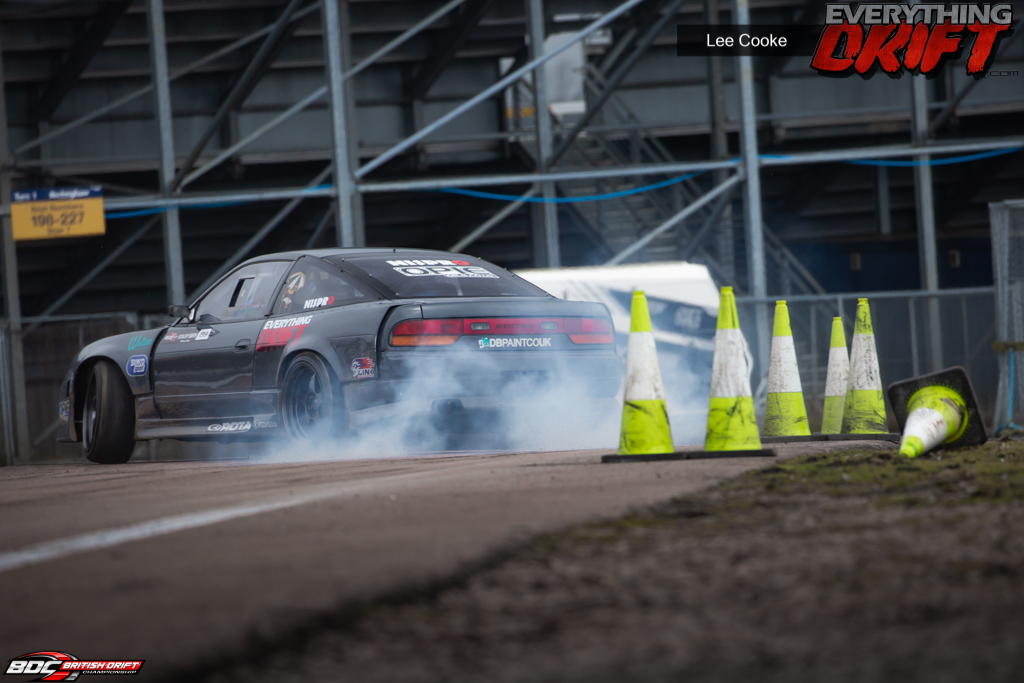 I went for my second run and had a bit of an improvement with a 61, I was happy with 21st and on to battles after the issues during practice. 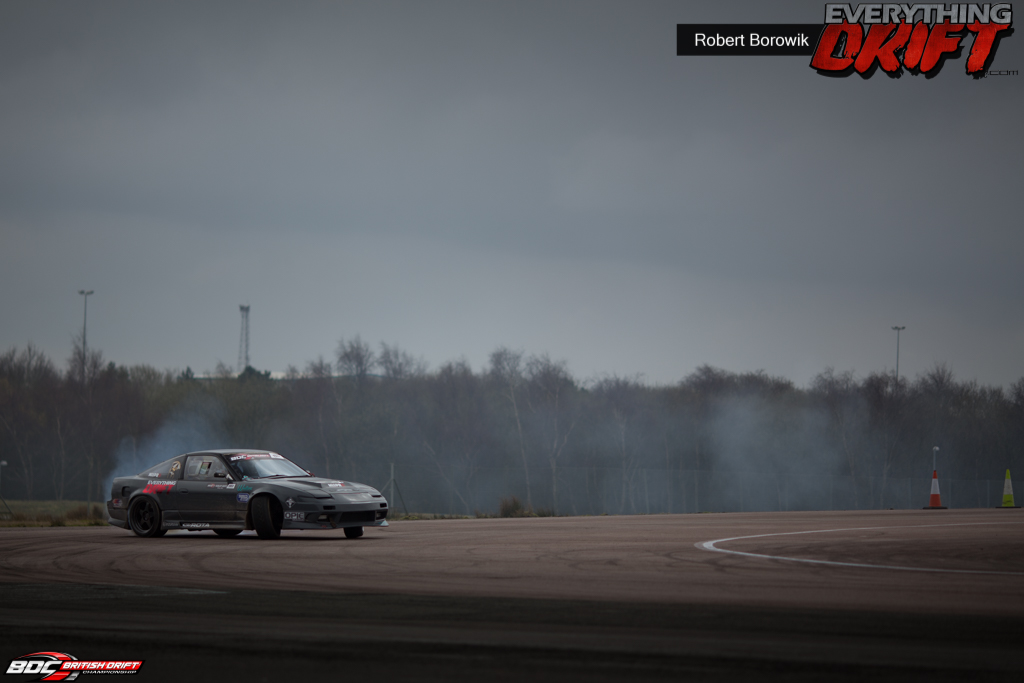 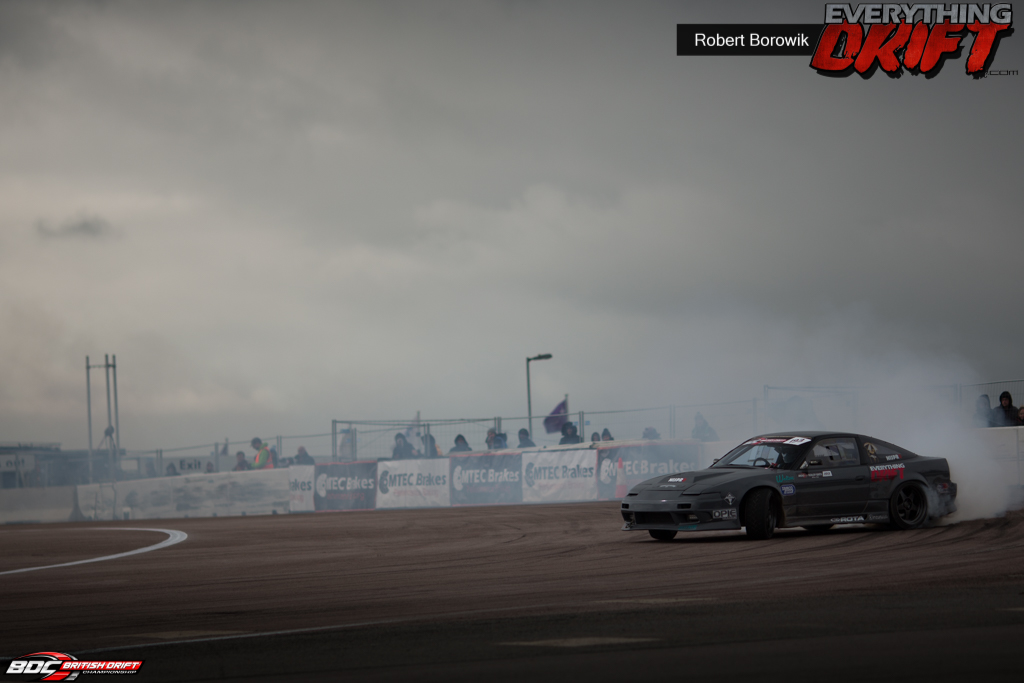 My first battle lined me up with Matthew Walker in his M3 powered E30, Matt and I have battled before and I knew I wouldn’t have to hold back on my chase run even though it had now been raining and the track was wet. I followed what we were told in briefing and stuck to Matt’s line even though it wasn’t the perfect qualifying line and kept good proximity throughout the track. 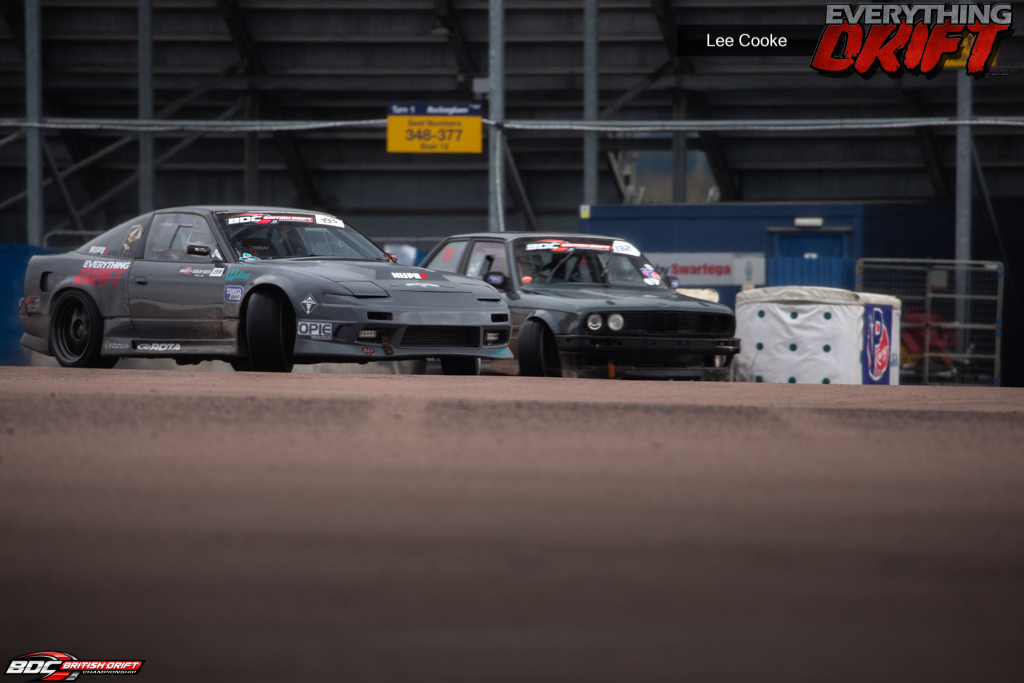 Now for my lead run, I laid down as good a run as I could with only being shallow on clip 7 and very slightly clipping the last wall. I took the win which was great and broke my streak on not making it past the top 32 last year at any round. 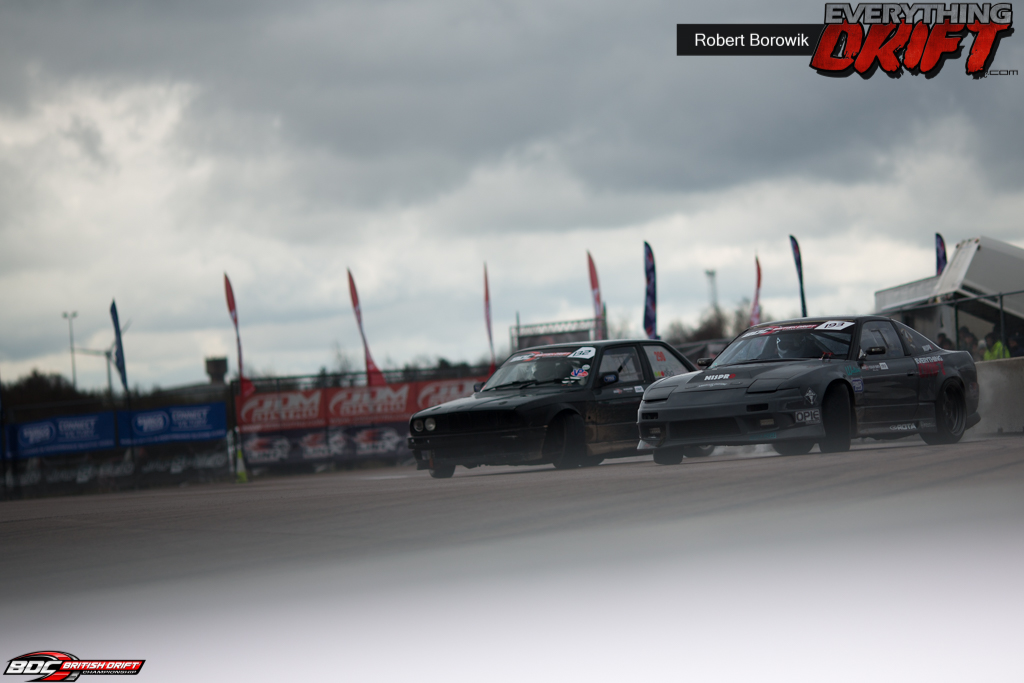 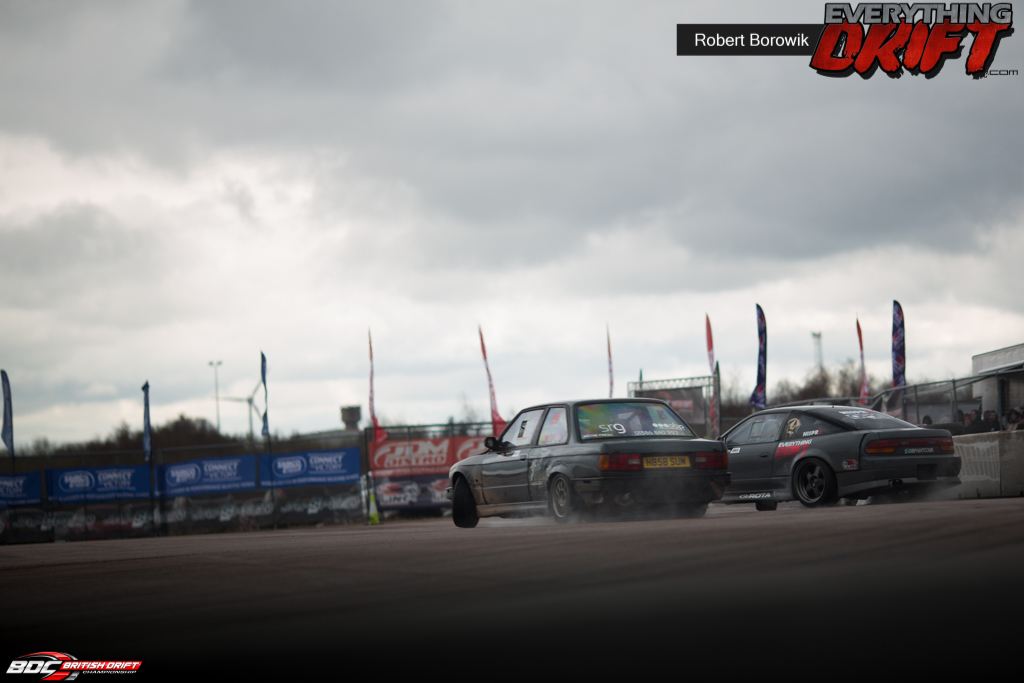 My top 16 battle would be against Oliver Bolton in his SR powered S13. While I was sat waiting for the battle I was checking the car out and found that my boost gauge peak recall was only saying 12.5 psi which is wastegate spring pressure. 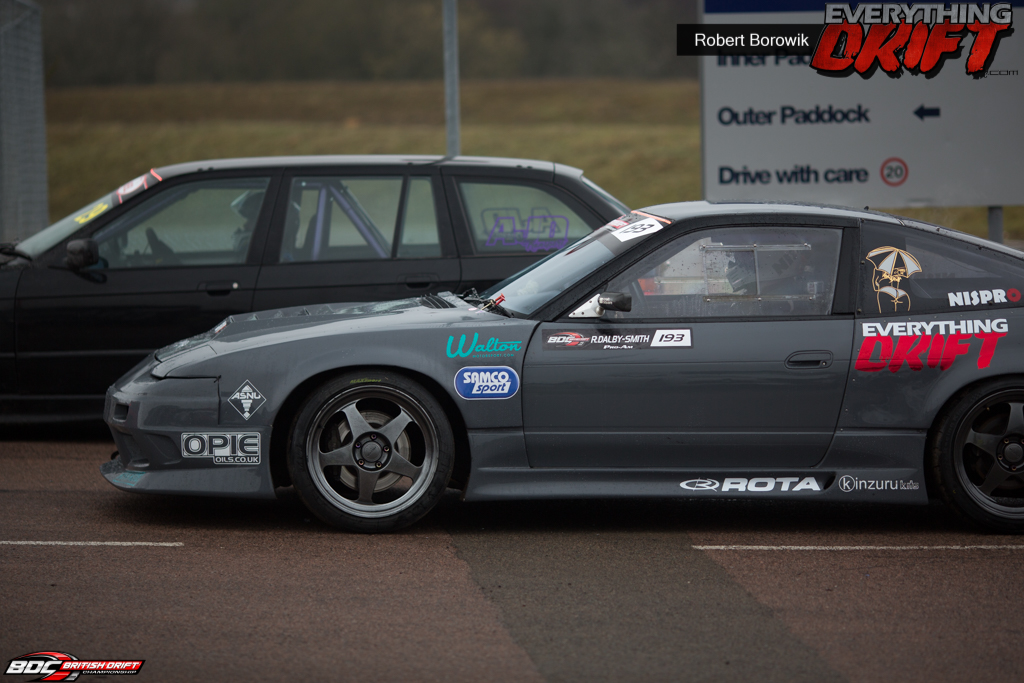 This isn’t right and explains the issues in practice as the CA should be running 21psi of boost. I jumped out and started to check things over in the rain and couldn’t find any split pipes or obvious issues with anything so nothing I could do about it in the queue for my battle, luckily for me it was still completely wet so the lack of boost hopefully wouldn’t hurt me during the battle. 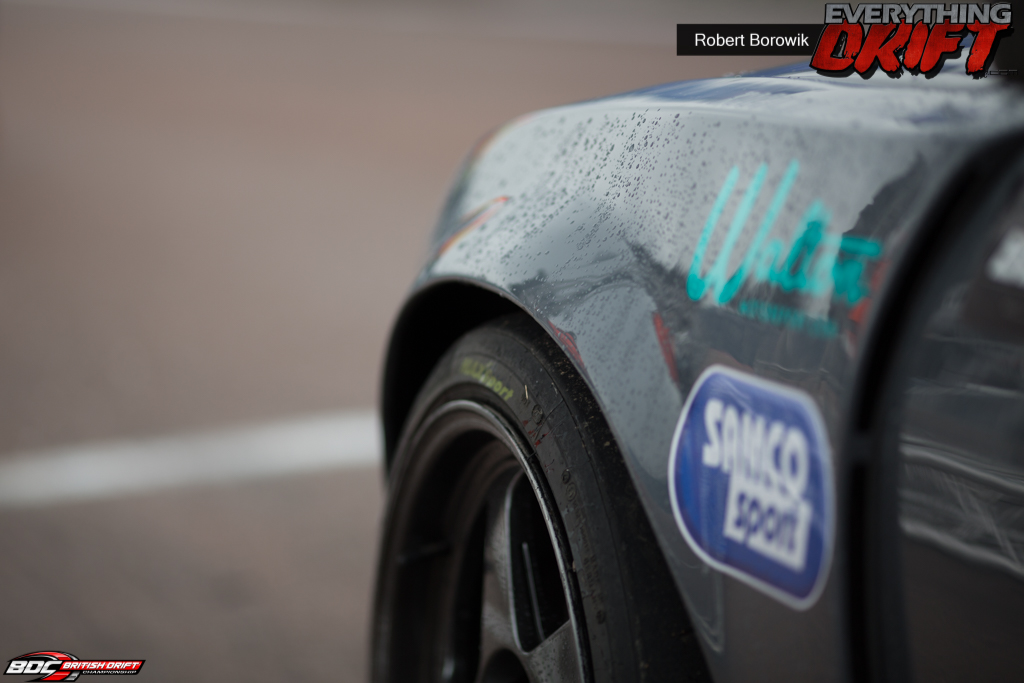 Again I knew I could chase hard as I’ve been watching Oliver drive so I had confidence. I stuck to him as close as I could and was happy with my chase I could still get closer but that is a practice thing for me to work on, I did have a very small wobble coming past clip 7 before the final clip on the wall unfortunately. 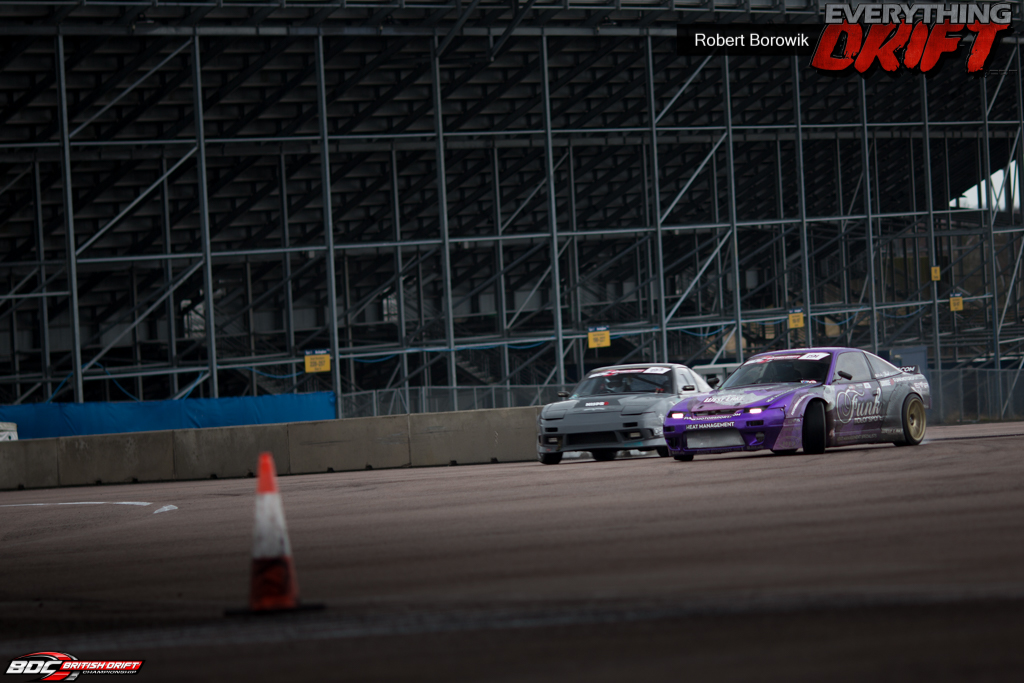 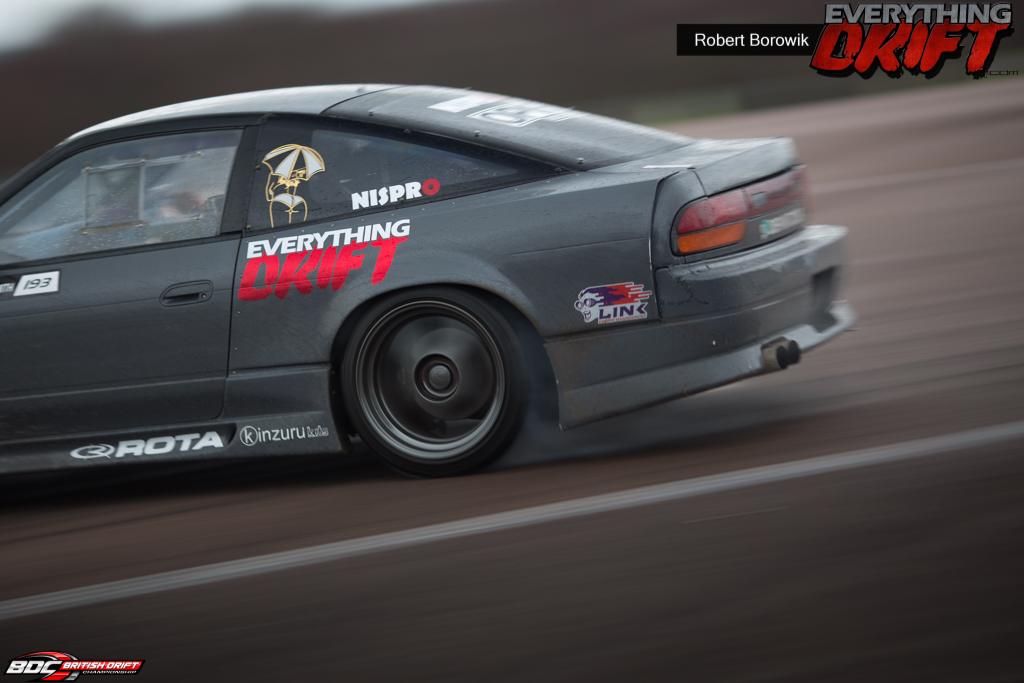 My lead I nailed the qualifying line the best I could and Oliver kept similar proximity to my chase. In the end Oliver went through due to my wobble but it was a very close battle. 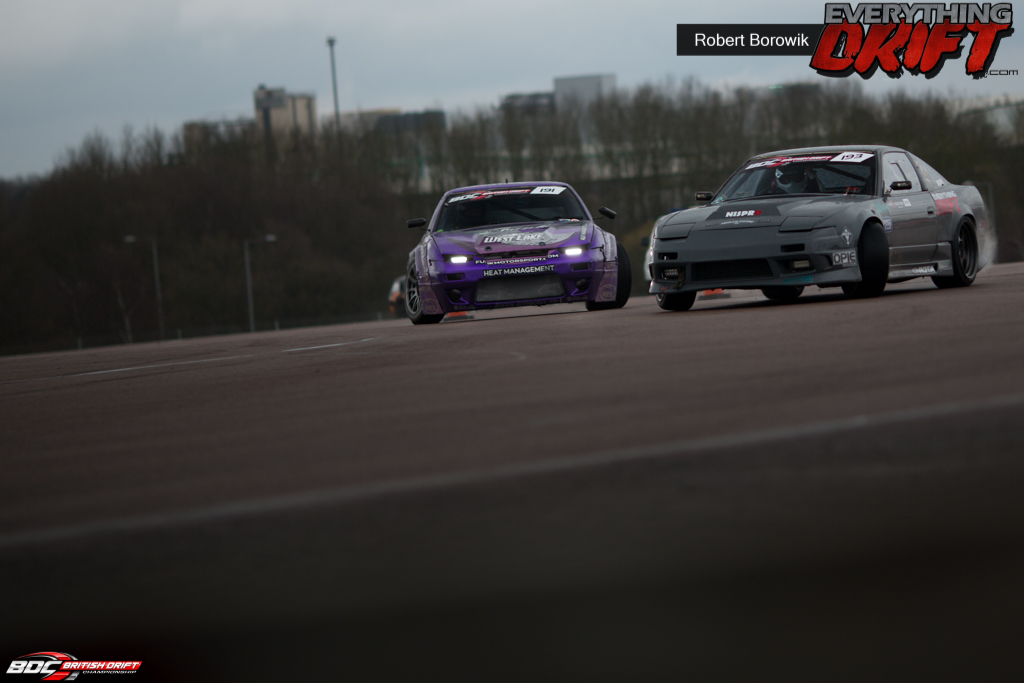 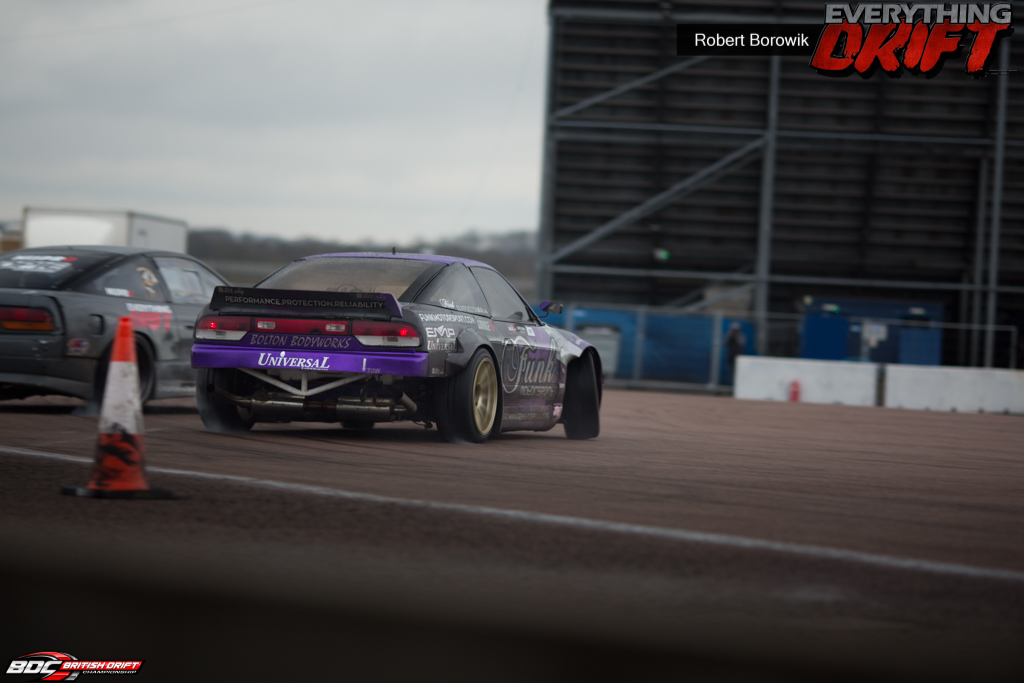 Now the dust has settled and the weekend is done I have a few things to do on the S13 that I didn’t have time for before round one as well as now to fix the lack of boost issue hopefully it is simple like a failed boost solenoid. 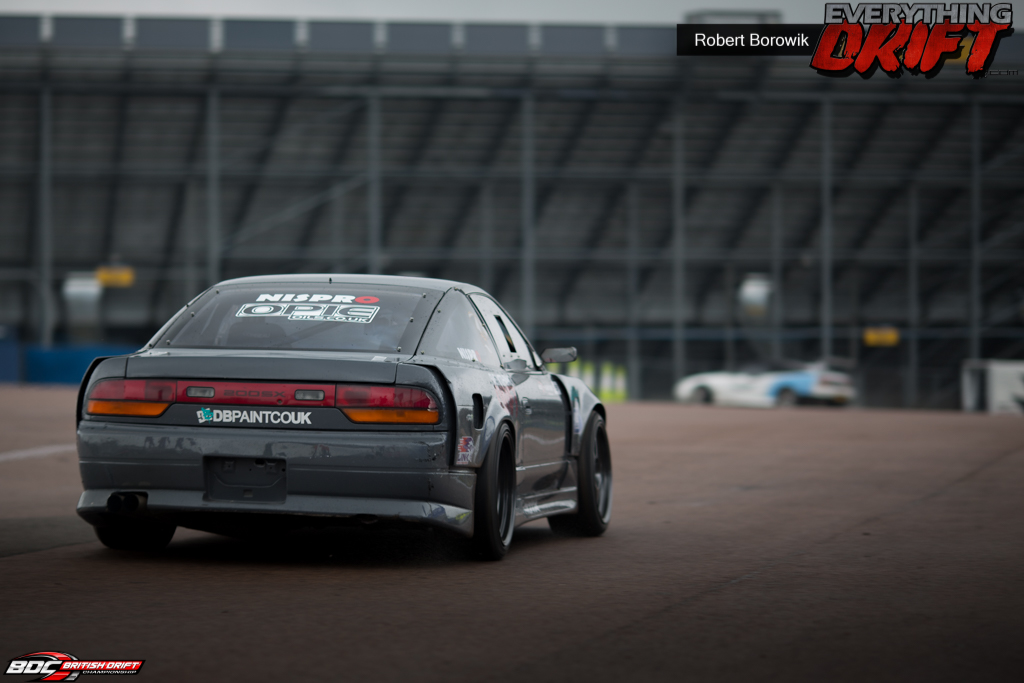 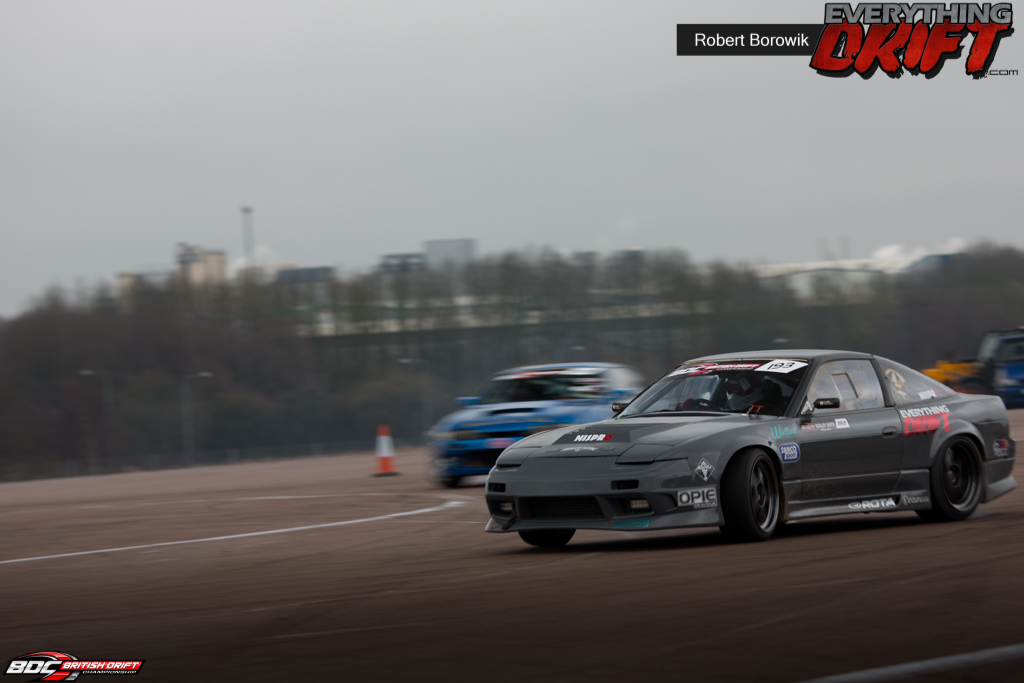