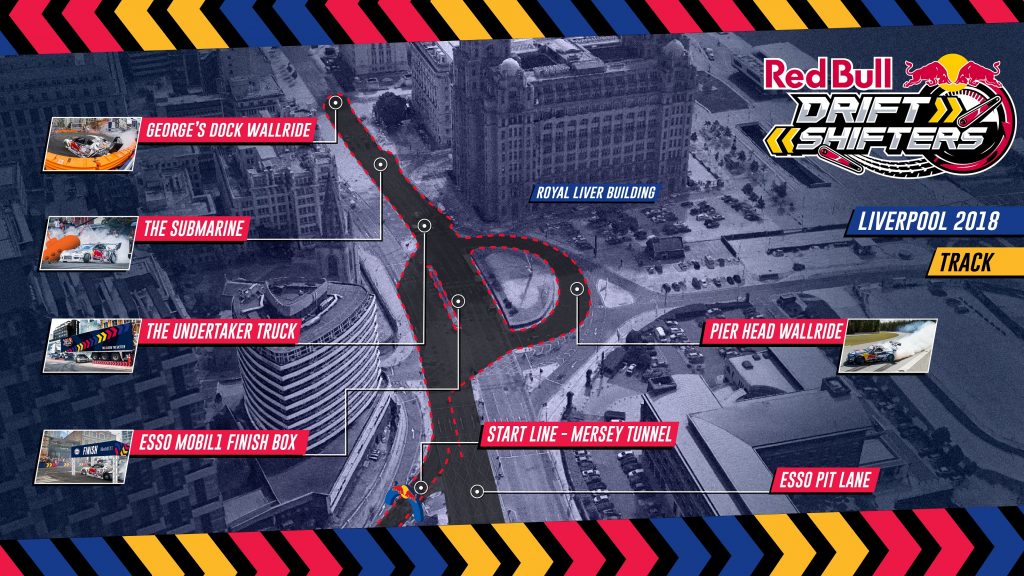 Red Bull Drift Shifters has revealed the course that will test the nerve of 12 of the world’s best drifters as they battle it out this August for a chance to be crowned champion.

The custom track will run through the centre of Liverpool and, at almost three times the size of previous Red Bull Drift Shifters events in New Zealand, will be the biggest yet; incorporating both old favourites and exciting new features throughout the track.

To challenge the drivers’ ultimate skill, the following features will be positioned throughout the course, designed to test their speed, precision and nerve. These include:

Drivers will start their run beneath the city of Liverpool itself, firing out from the Mersey Tunnel, as featured in Fast and Furious 6, and onto the track.

The biggest and fastest wall-ride ever featured in a Red Bull Drift Shifters event. At a length of over 80m and the fastest entry speed of any corner on the track, drivers will be trying to slide the rear bumper of their car as close to the wall as possible to trigger the proximity sensors mounted within it.

A crowd favourite feature from previous events – drivers drift their vehicle around and underneath a fully functional articulated truck.

A brand-new feature in the centre of the track that pays homage to the rich heritage of Liverpool.

Sitting at the very end of the track, this tight wall-ride requires drivers to manoeuvre their vehicle perfectly or face vehicle demolition. To gain bonus points for hitting all six sensors on this wall ride, drivers will have to position their vehicle within 30cm of the wall as they drift the entire way around the almost 270-degree corner.

Possibly the most important feature on the track, the drivers have to finish their run by drifting their vehicle into the tightest parallel parking spot in the city and be within 30cm of the wall before the clock stops. Drivers cannot afford to miss this obstacle otherwise they face missing out on bonus points and a spot at the top of the leader board.

Unlike more traditional drifting events, the course is rigged with advanced sensors which measure drivers on their speed, line, angle and proximity. This technology instantly converts the quality of each drifting performance into a score, removing the need for judges, ensuring enhancing accuracy in scoring.

Each driver is given a limited amount of time to rack up the best score possible and make it back to the finish box before the clock hits zero. Drifting the entire course sideways at high speeds is the fastest way to trip sensors and gain the most points in the time they have. The angle they drift is also important as specific features in the course use the exact angle of the vehicle to score the driver, with big score rewards for getting the car fully sideways, just metres from the crowd.

The course features are arranged in a freestyle format designed to reward drivers for driving it in their own style. Combining their own unique choice of speed, line, angle and proximity into each run, their car becomes a pinball as they manoeuvre the vehicle around the track to trigger sensors and gain the best scores possible whilst giving the crowd the best show possible.

Spectators should come prepared on August 19th for an adrenaline-fuelled event that will test nerves to the max and wow with precision driving like never seen before in the UK.

Tickets are now on sale at www.redbull.co.uk/driftshifters

The event is being organised in partnership with Liverpool City Council and forms part of Liverpool 2018 – a year of projects marking a decade since Liverpool’s transformational year as European Capital of Culture.

« The School of Drift is Building The Next Generation of Drift Drivers
2018 HEL Performance Driftcup: Round 4 – Aidan Clarence »