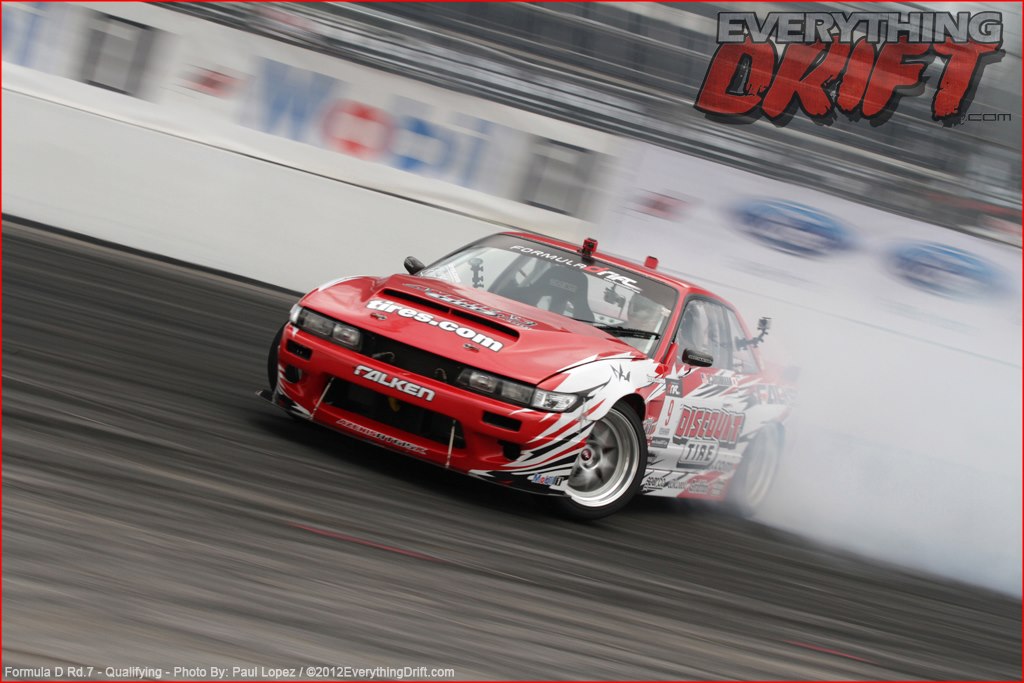 This past weekend was the final event of the Formula DRIFT Championship Series; held at what is commonly known as the “House of Drift,” Irwindale Speedway.  Dubbed the “Title Fight,” round 7 was a make it or break event for Daijiro Yoshihara in the chase for a second championship title.

Looking strong throughout practice, Yoshihara was poised and ready to take action for his upcoming competition rounds.  Yoshihara qualified 17th in overall qualifying order which paired him up with Kyle Mohan and his 2010 Nexen Tire Mazda RX-8 in the Top 32 round of competition.  In the leading lap, Yoshihara chased Mohan around the unforgiving Irwindale track layout.  Yoshihara gave Mohan minimal amounts of breathing room, as he stayed close in proximity throughout the entire run.  During the second lap, Yoshihara charged out of the starting gate and aggressively drifted around the first bank.  As Yoshihara neared the inner wall area of the track, Yoshihara came in too hot which led him to tap his rear bumper on the wall, which caused his car to straighten out.  This minor error caused more damage than not and eventually knocked Yoshihara out of competition ending his season prematurely.

Yoshihara finished the 2012 season in a respectable 7th place in overall championship points.  “I didn’t want to end the season like this,” explains Yoshihara.  “I wanted to end strong, but sometimes it doesn’t work out in your favor.  However, my crew and I had a very strong season so I am thankful for that.  We’ll be back next year stronger and more focused; looking for another title.”

The last event of the season provided Yoshihara one last opportunity to meet with his fans and supporters.  He was able to collect more donations for his charity; RFJP.org, raising $400 over the event weekend.  “Thanks again to all my fans and supporters that showed their support throughout the season,” an ecstatic Yoshihara states.