A wet course and dense fog during the 4,724ft climb to the finish line made the 100th running of the Pikes Peak International Hill Climb especially challenging for drivers. Yet Japanese champion Daijiro Yoshihara was able to master the 156 turns on his way to the 14,115ft peak. He set a time of 11:06.205 in the Turn 14 Distribution / Yokohama Tire / ENEOS / Evasive Motorsports Tesla Model 3 Pikes Peak, which placed him ninth overall. As the fastest EV, he was second in the Exhibition Class because PPIHC currently lacks dedicated classes for electric vehicles. Winner of the class was a production 2022 Porsche 911 Turbo S Lightweight.

This year’s event was only the second outing for the Tesla Model 3 prepared by Evasive Motorsports in Cerritos, CA. Despite its promising form in practice and qualifying, a mechanical issue prematurely curtailed its 2021 attempt. During the interim, the team worked hard to understand the car and fine-tune both its aerodynamic and cooling efficiency (see Tech Spec below), making few additions to the race-prepped chassis other than switching to Yokohama racing tires for 2022.

“It’s been an incredible week with no issues,” Dai Yoshihara told us after his successful run. “Practice and qualifying went great, which almost seemed too good to be true. And then coming into today [Sunday] the weather became a big factor with the rain and fog. However, we felt it could give us a real chance because our weakness is the power of the car but the Yokohama wet tires work really well. Effectivley, the rain erased the advantage of the other cars and I think we got a really good result because of it, which I’m obviously delighted about.”

END_OF_DOCUMENT_TOKEN_TO_BE_REPLACED

Evasive Motorsports Tesla will again be driven by Dai Yoshihara.

The 100th running of the 2022 Pikes Peak International Hill Climb on June 26 will mark the fourth year ENEOS has supported the race efforts of Evasive Motorsports and driver Daijiro Yoshihara.

ENEOS is Japan’s largest oil company and supplier of motor oil and transmission fluids to the majority of Asian vehicle manufacturers. Through its relationship with the car makers, it introduced an EV Fluid Series last year, which is designed to optimize the efficiency and performance of electric vehicles. And while it might appear unusual for an oil company established in 1888 to compete in the “Race to the Clouds” with a Tesla, it reflects the transition the company is making as transportation evolves.

In 2019 and 2020, Evasive Motorsports entered an ENEOS-supported 900-horsepower turbocharged Toyota 86 in the Pikes Peak International Hill Climb (PPIHC), which won the Unlimited Class at the second time of asking. However, the team made a radical shift in 2021, abandoning its proven race winner for a Tesla Model 3 Performance.

Mike Chang at Evasive Motorsports in Cerritos, CA could see the market changing and knew it was time to embrace the future. But for a racing team and vehicle preparation specialist like Evasive, the Tesla Model 3 presented a number of challenges. In the past, a modified Toyota 2JZ turbo engine allowed them to compensate for the reduced air pressure on the climb to the 14,115ft finish line at the Pikes Peak hill climb. Unable to modify the electric motors in the Turn 14 Distribution / Yokohama Tire / ENEOS / Evasive Motorsports Tesla Model 3 Pikes Peak race car, the team needed to make other changes to prepare for the 12.42-mile sprint, which climbs 4724 feet. With the “Race to the Clouds” incorporating 156 turns, emphasis was placed on the chassis to maintain speed through the corners.

END_OF_DOCUMENT_TOKEN_TO_BE_REPLACED

ENEOS – Japan’s largest oil company and supplier of motor oil and transmission fluids to the majority of Asian vehicle manufacturers – is pleased to announce it will again support Japanese driver Daijiro Yoshihara in the Formula DRIFT PRO Championship. A week before the opening round at Michelin Raceway Road Atlanta, ENEOS and Dai are marking the fifth year of their motorsports partnership, although Dai’s connection to the brand dates back to when he worked at an ENEOS gas station as a young man in his native Tokyo. Rising to become the 2011 Formula DRIFT Champion, Dai continues to be among the top drivers in the sport he’s been committed to since its inception in 2003.

END_OF_DOCUMENT_TOKEN_TO_BE_REPLACED 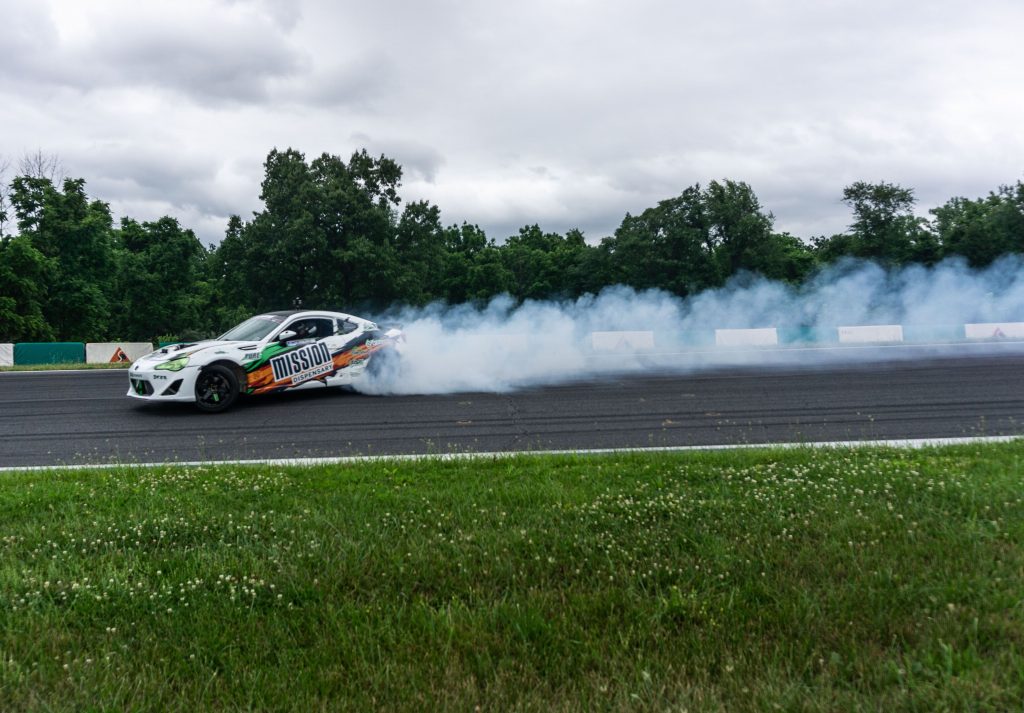 Formula Drift is recognized as the premier North American professional drifting championship series. The series consists of an eight-round championship played out at race tracks across North America. Judged on line, angle, and style, rather than who finishes the course in the fastest time, Formula Drift brings together traditional racing and extreme sports. END_OF_DOCUMENT_TOKEN_TO_BE_REPLACED 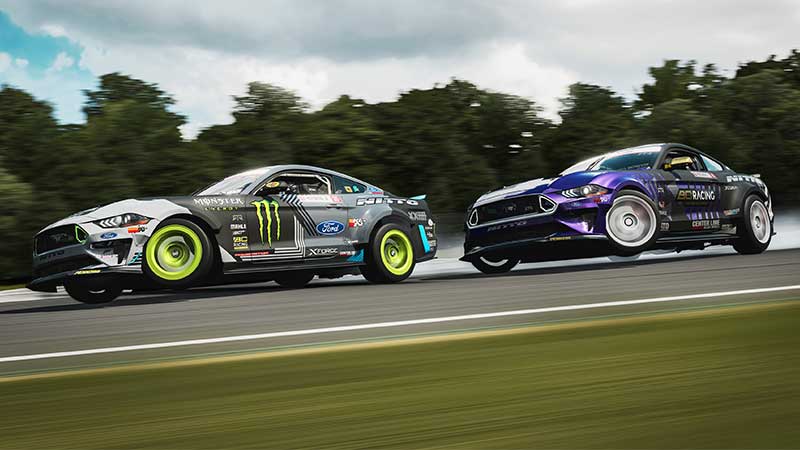 All three vehicles are available on the driving simulator Forza Motorsport 7 and the incredibly massive open-world of Forza Horizon 4. As a DLC (downloadable content), the free car pack will automatically update once players connect to Xbox Live. 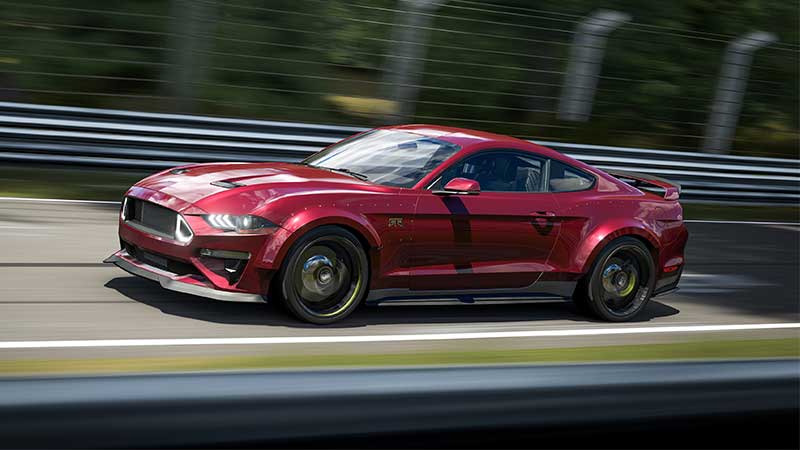 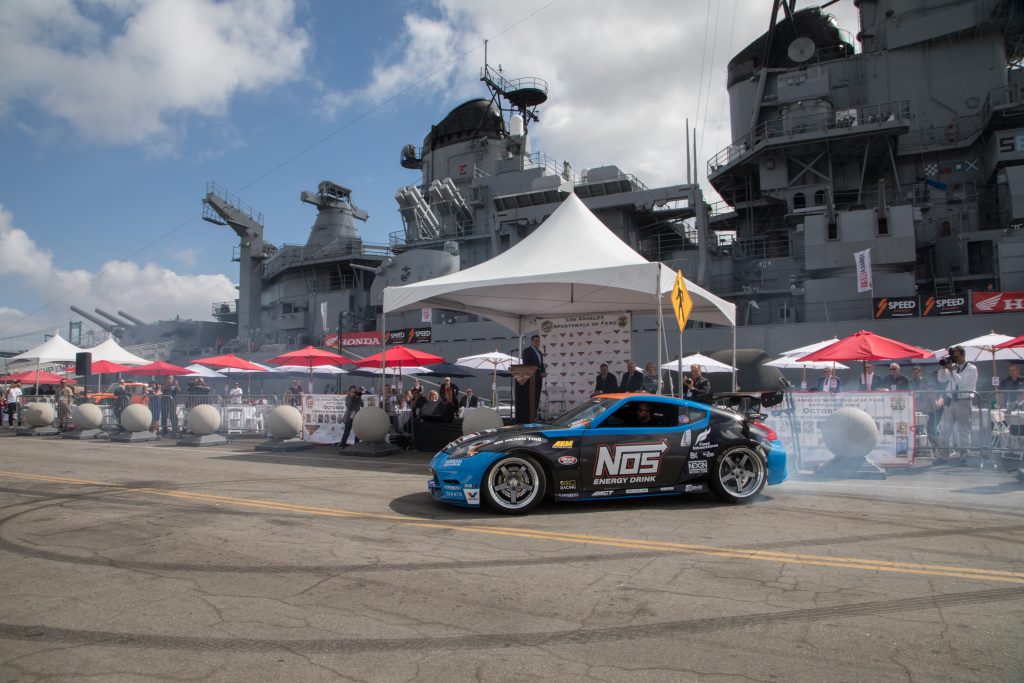 In a ceremony that took place on Monday, October 8, 2018 in front of the Battleship Iowa in the Port of Los Angeles, Chris Forsberg was singled out for his outstanding success in the Formula DRIFT series over the past 15 years.

The LA Sportswalk of Fame began in 1978 to honor the men and women who reach the top of their sports. For 2018, Chris Forsberg was among 11 athletes selected for the award. He stood alongside NASCAR, IndyCar and off-road legend, Robby Gordon, as well as 11-time Baja champion, Johnny Campbell. Other notable inductees included football Hall of Fame star Lynn Swann and baseball champion, Mike Scioscia.

Chris earned his place by virtue of being the most successful Formula DRIFT driver, with three championship titles earned in 2009, 2014 and 2016. He’s currently the second most successful in terms of round wins, with nine to his name, and has 36 podium places, which is more than any FD driver. Being the only driver to have competed in every round of the series, and one of four to have been in the series since day one, Chris has an amazing record and isn’t about to call it a day – he currently sits fourth in the 2018 FD Pro standings going into the Final Round this weekend. He boasts a round win in Orlando among his impressive 2018 points tally.

As a true champion, Chris arrived at the ceremony in proper DRIFT style, sliding his NOS Energy Drink Nissan 370Z on Nexen Tires in figure-8s around the dock. He then thanked Chris Agajanian and family for the nomination and briefly recapped his career, acknowledging the support of his wife and the importance of taking kids off the street, helping them to learn car control in a safe environment. He thanked the Agajanian family for recognizing the sport and proudly accepted his award.

The Los Angeles Sportswalk Of Fame began in San Pedro, CA as a celebration of local athletes. Originally known as the San Pedro Sportswalk to the Waterfront, the name was changed in 2017 to reflect the growth of the project and its move to the Port of Los Angeles. Each inductee is honored with a bronze plaque and these can be found installed on the sidewalks of downtown San Pedro, centered around 6th Street and Mesa Street. For more information visit lasportswalk.org