We’re only four events into the 2018 Formula DRIFT Black Magic Pro Championship but a fourth driver climbed to the top step of the podium to claim the victory at the Wall Stadium Speedway in New Jersey this weekend. Overcoming an impressive list of challengers throughout the heats, 2017 champion James Deane (Ireland) put a mark in the win column. 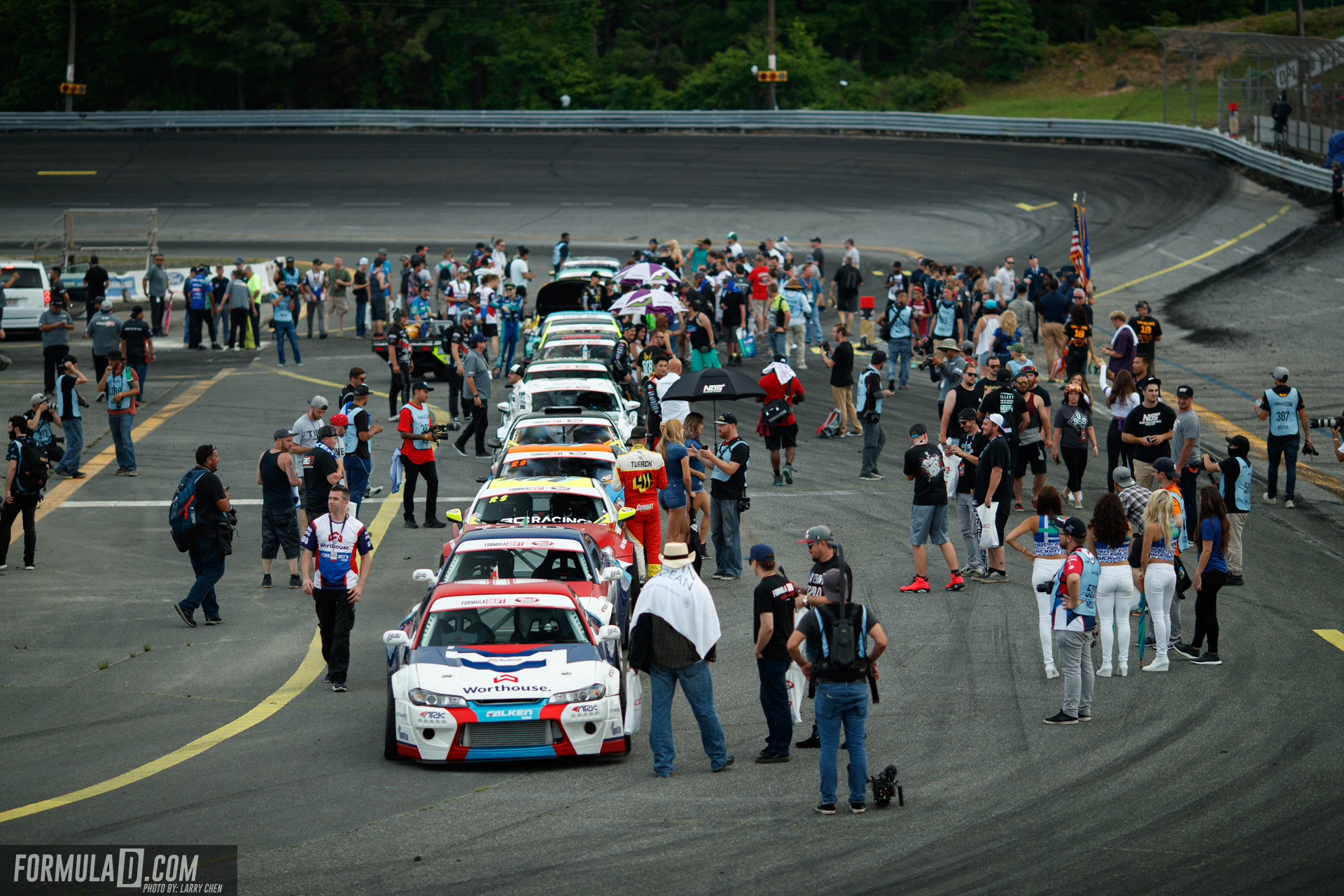 The Advance Auto Parts Round Four: The Gauntlet presented by Black Magic represents a milestone for Formula DRIFT, with this being the 100th round in the series’ history. It would be celebrated in the best possible way with top flight drift action from the best drivers in the world. 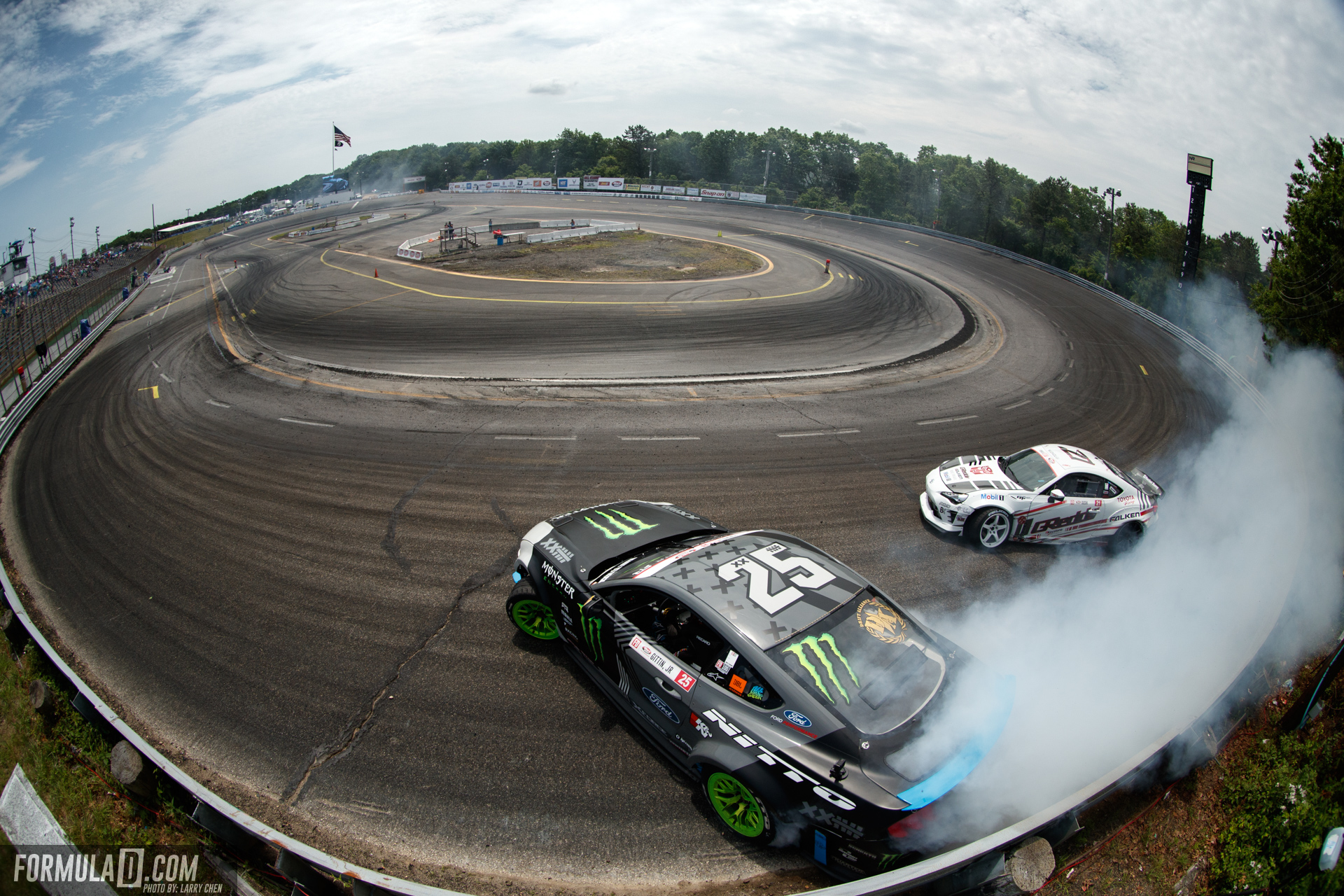 The event got off to a cloudy start with the threat of rain remaining all weekend. Mercifully, it didn’t materialize during the competition, although the conditions would be hot and humid for the drivers as they made their way through practice and into qualifying.

Repeating his performance from Round Three, Justin “JTP” Pawlak driving the Roush Performance / Falken Tires 2018 Ford Mustang clawed his way to the top of qualifying  with two strong runs that earned him a bye in the first competition heat. 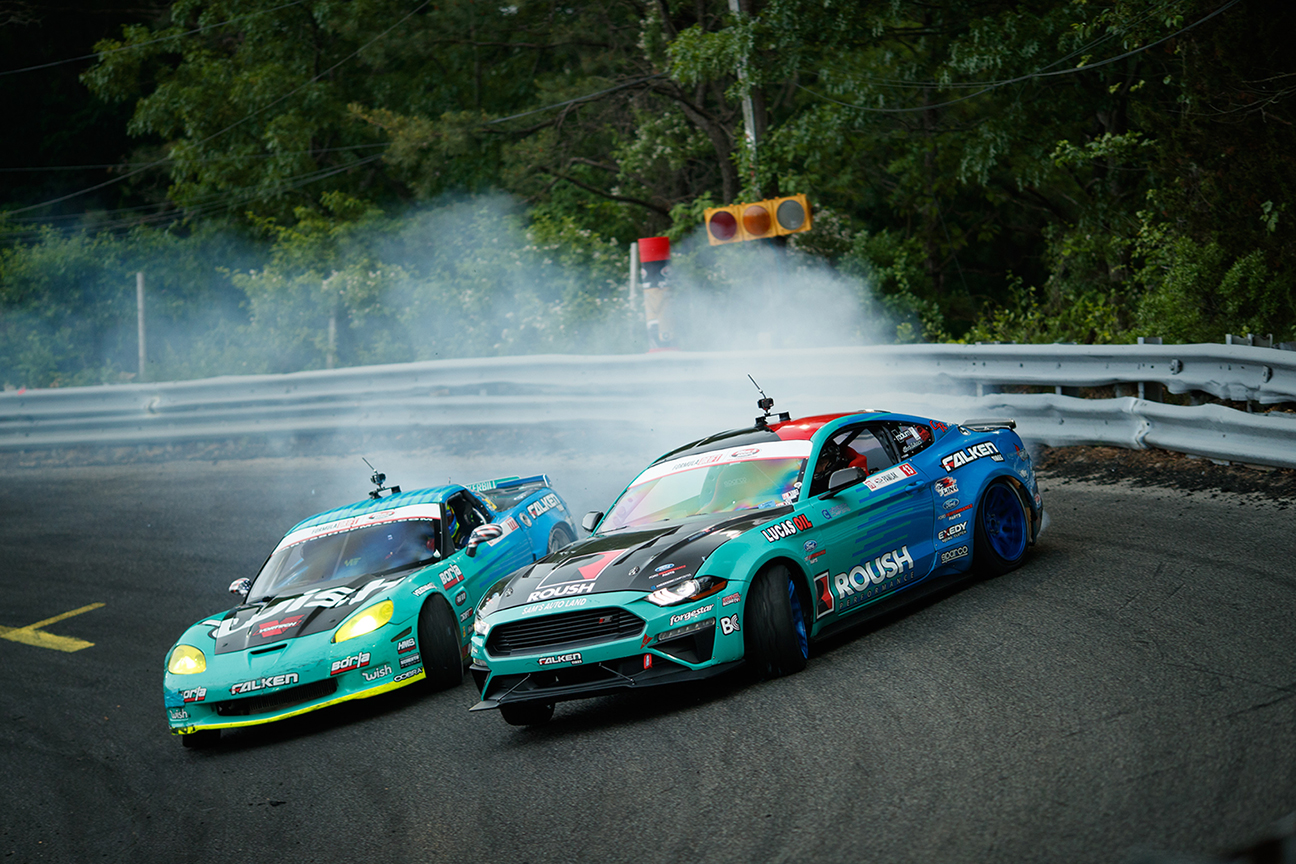 “Practice was tough for us,” Justin reflected after qualification. “It took me a while to find the best line but then I was able to put it all together and qualify first, which is great to repeat after Atlanta. I need to do a better job of turning this qualifying form into results during the heats.”

Qualifying second was Aurimas “Odi” Bakchis (Lithuania) in the Falken Tires / Maxxoil / Drifz Wheels Nissan S14 with a consistent pair of runs, losing out to Pawlak by just three points.

Behind the top pair were the usual suspects, with James Deane in third, Fredric Aasbo (Norway) in fourth and Matt Field (USA) in fifth – the latter finally getting to grips with his new-for-2018 Wish / Borla / Falken Tire Chevrolet Corvette. 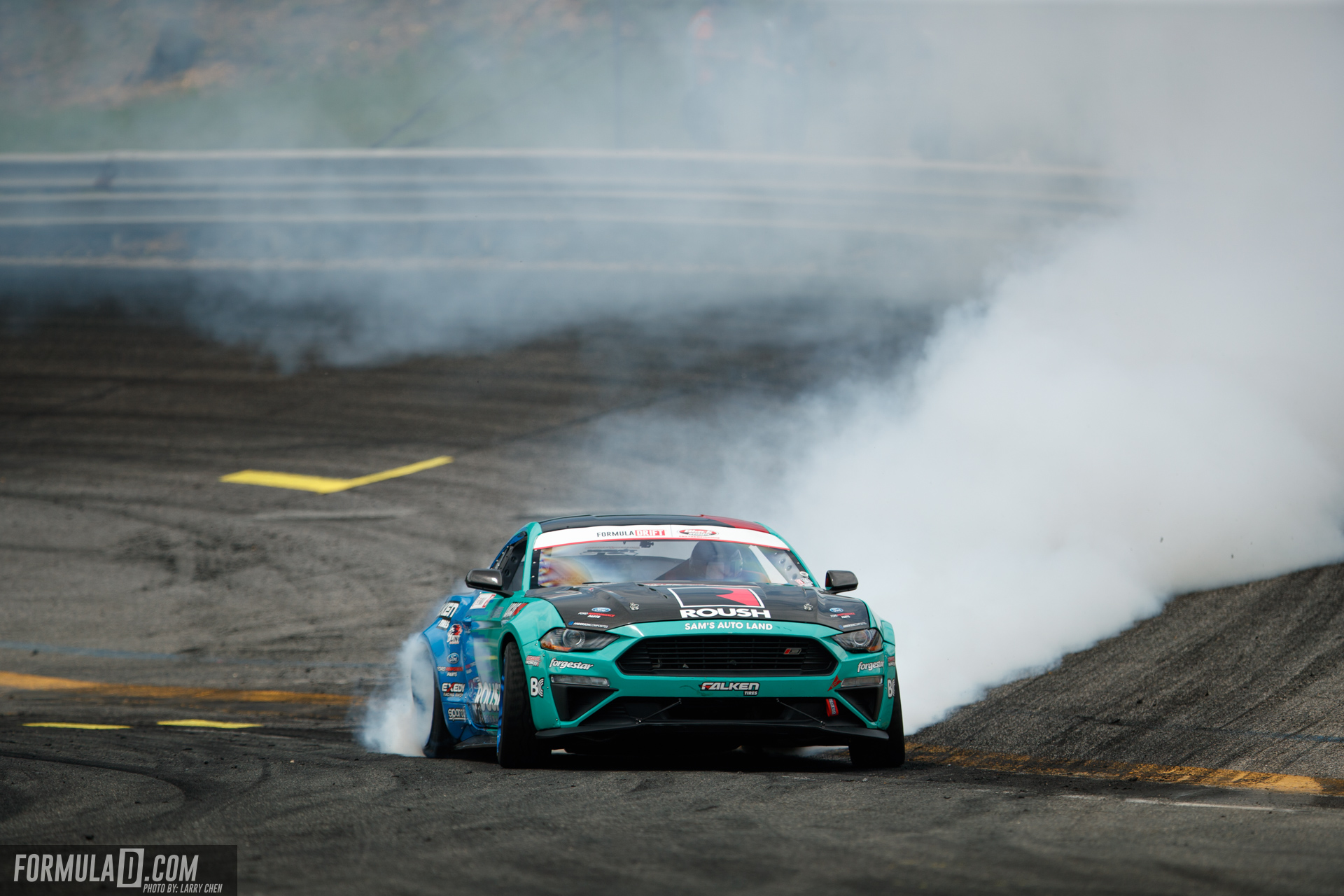 In the main event, Pawlak took advantage of his bye run in the Top 32 to replace a broken driveshaft that snapped during a free run. It meant he only just made the grid for the Top 16 where he faced Alec Hohnadell (USA) in the Rain-X / Permatex / Nexen / Hoonigan Nissan S14. Pawlak’s win then pitted him against the FD Orlando round winner, Chris Forsberg (USA) in the NOS Energy Drink Nissan 370Z on Nexen Tires. Forsberg qualified ninth and would eventually finish fifth overall but had no intention of giving Pawlak an easy ride. Their first runs were too close to call, so the Judges requested “One More Time” resulting in repeated runs and a victory to Pawlak courtesy of a mechanical issue for Forsberg on the final run.

Pawlak’s good fortune would end when the Ford driver faced Matt Field in his Chevrolet. It was another titanic battle, with the Judges requesting “One More Time” and still struggling to separate them. The decision would fall to Field who headed to the Final.

Matt Field’s day started in the Top 32 against Jeff Jones in the Doc X / Falken Nissan 370Z. He then faced Ryan Tuerck (USA) in the Ryan Tuerck Racing / Gumout / Black Magic / Nexen Tire Toyota 86 before meeting Forrest Wang (USA) in the Great 8. The latter would be an exciting battle that was decided by a collision in the second run when Field collided with Wang’s Vapetasia / Achilles Radial / NRG Innovations Nissan S15. The Judges ruled that the incident occurred when Wang braked before the Decel Zone, causing Field to make contact. The decision would see Field advance to the final against James Deane. 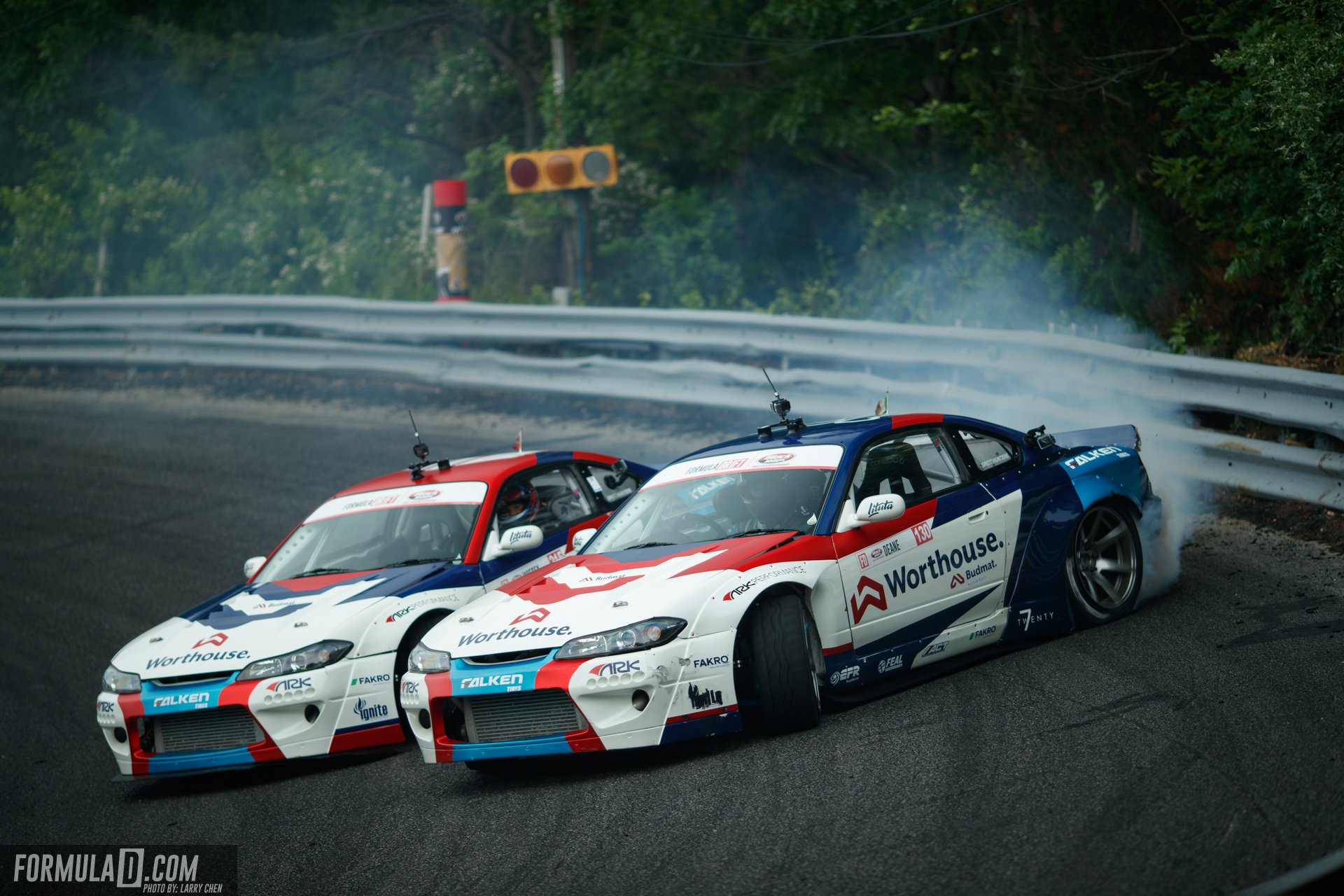 Having qualified third in his Worthouse / Falken Tire Nissan Silvia S15, the 2017 Formula DRIFT champion also had a challenging path to the final. It started against Kazuya Taguchi (Japan) in the Achilles Radial / Up Garage / Top 1 Oil Nissan GT-R. Deane then met his own team-mate – Piotr Wiecek (Poland) in an identical Worthouse / Falken Tire Nissan Silvia S15. With the same machinery and both drivers on top form, it was an epic battle that kept the fans on the edge of their seats. The decision would go to the Irishman, who moved on to face Kenshiro Gushi (Japan) in the GPP Toyota Racing / Falken Tire Toyota 86. Ken was unable to slow Deane’s roll as he headed to the Final Four, where he faced Odi Bakchis.

Having qualified second, Bakchis was very comfortable on the New Jersey course and pushed Deane hard. The Judges requested “One More Time” and Deane was forced to use his five-minute technical time-out to make repairs to the car. In end, Deane was unstoppable but certainly wasn’t gifted the win. 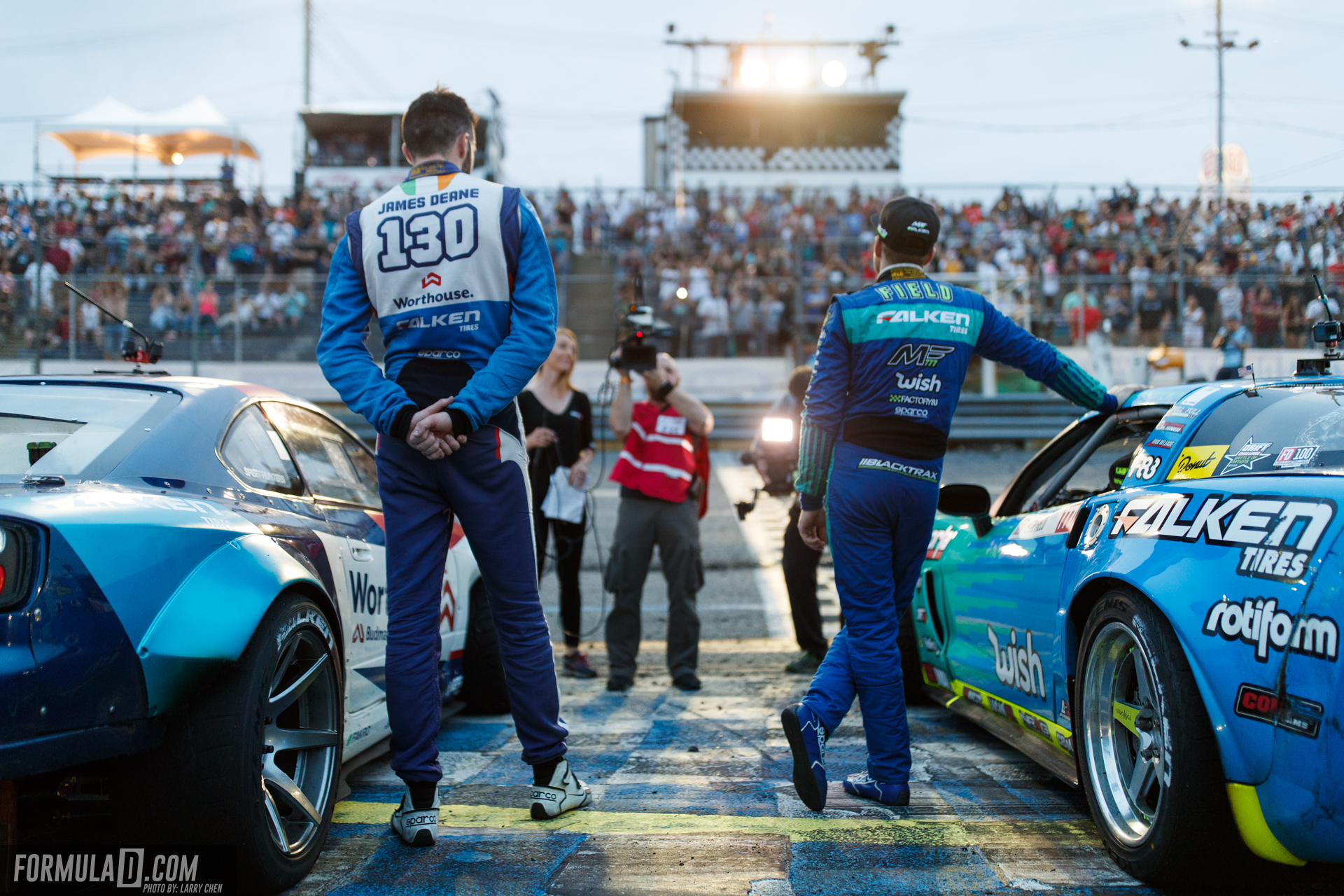 The final between James Deane and Matt Field brought two very different cars to the grid, with Deane was the on-form favorite. “We had a tough round in Atlanta after our crash in Orlando. It meant we’ve been chasing problems with the car all weekend and my confidence wasn’t the best. But the team worked so hard to fix the car and we made some changes that produced huge improvements. With the car working really well I pushed hard all day against some tough opponents. In the end, it was a super-close battle against Matt Field in the Final and I don’t know what gave us the decision but I’ll take it.”

Looking ahead to the next round, Deane continued: “I’m so happy after this result and we’re going to Seattle feeling great, hoping to maintain the momentum. We’re also leading the championship for the first time this season, which is a great confidence boost. I’m really happy with the team and the car but the level of driving in 2018 has jumped up and everybody is pushing so hard. This is making it really difficult to get a win in Formula DRIFT but we got one and I’m so happy.” 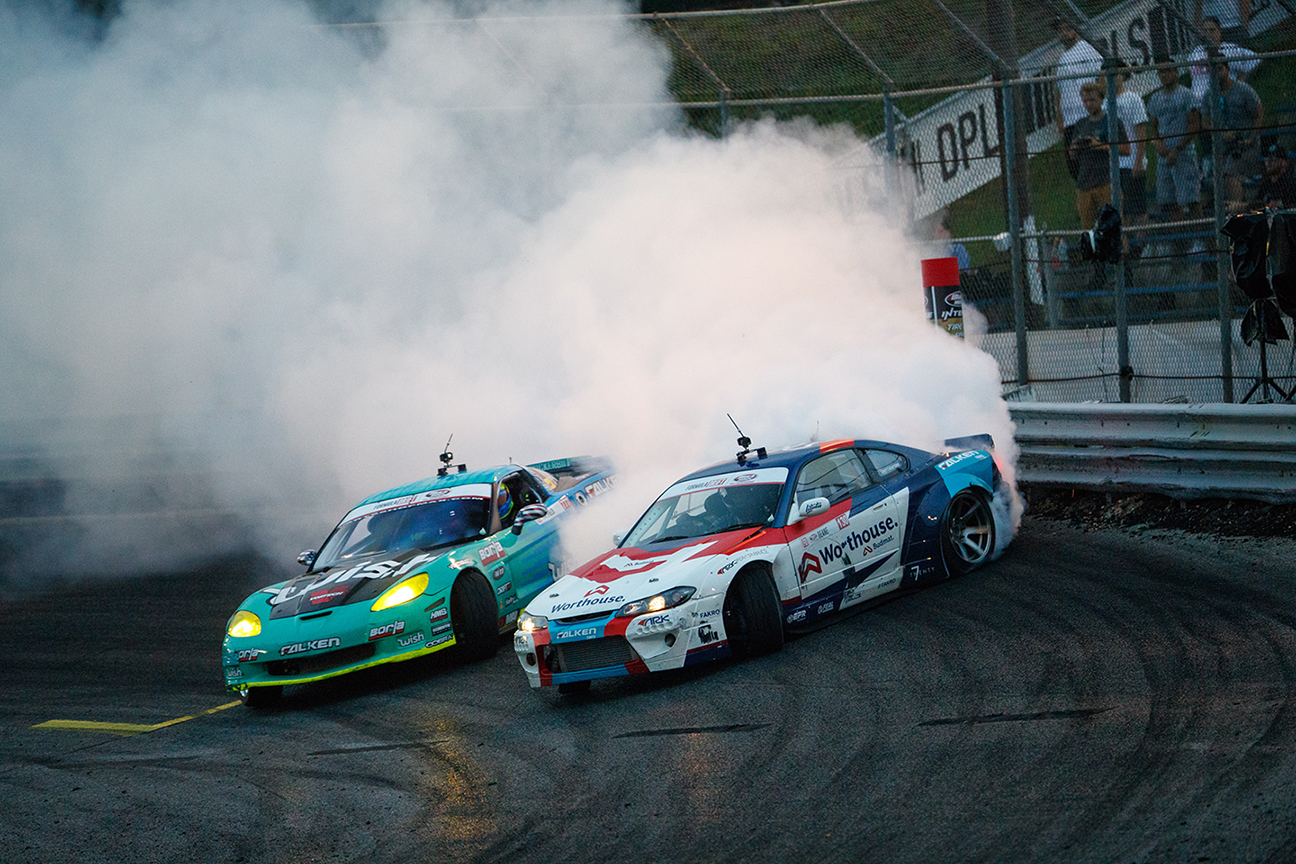 For Matt Field, his decision to build a new car was finally producing results. “It’s been a long off-season for us,” he explained. “It was five months of hell in the shop every day but today it’s finally starting to pay off. Up until this point we’ve only been reaching the Top 16. It gets a little boring. The guys [in the team] get a little tired of it. But today we got a podium: second place in a car that’s brand new and has a huge learning curve. It’s not something you can buy off the shelf and magically works – it took a lot of work and a lot of learning to get here. I’m fortunate to have the partners behind me that helped to develop it and the car was working really well.” 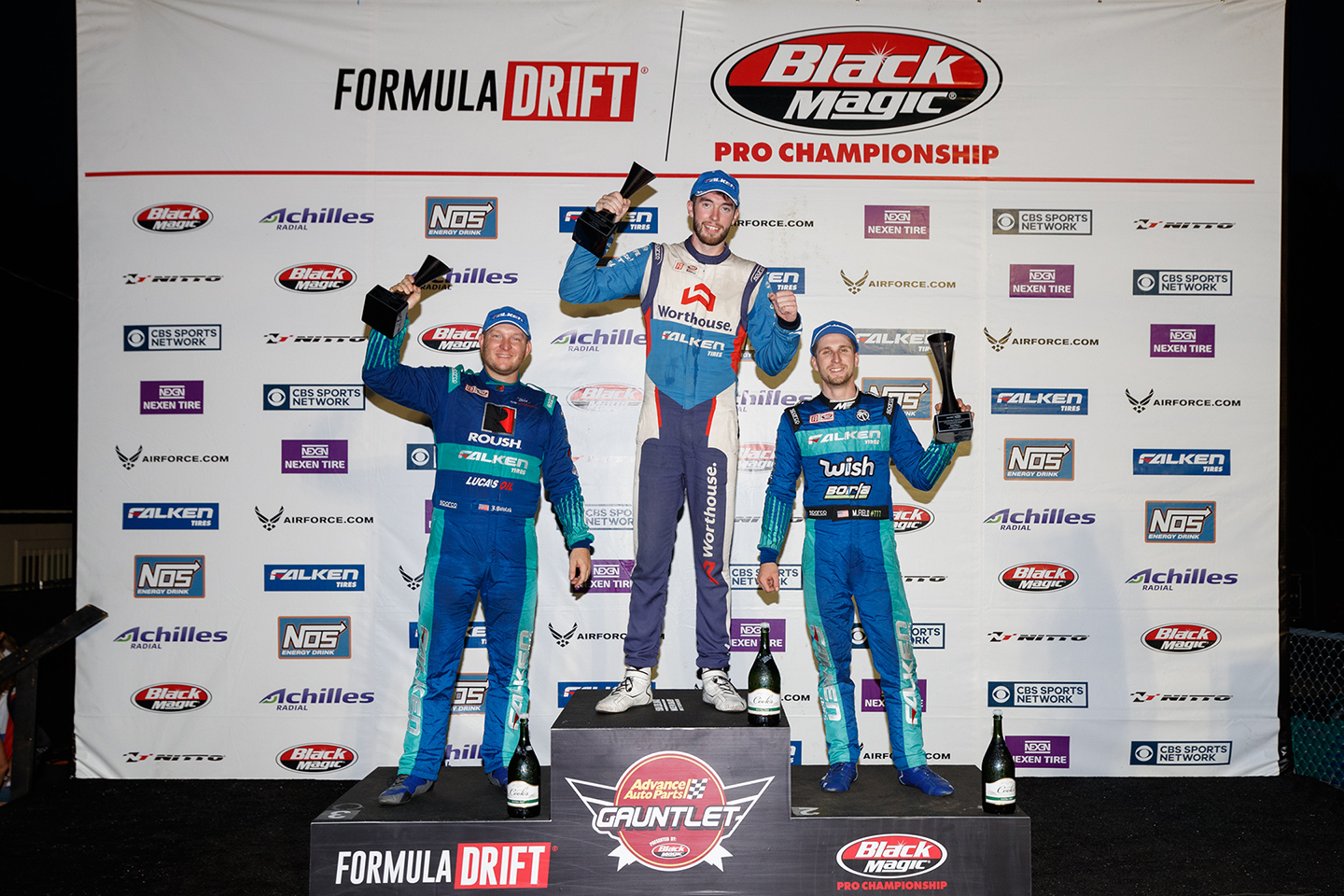 Formula DRIFT president, Jim Liaw was able to look back on an exciting weekend and the important milestone for the series. “Realizing we’ve completed 100 rounds allows us to see how we’ve grown. This event was part of season two and we’ve seen the number of fans and their intensity grow every year. They bring so much energy to the venue and the track itself makes it a unique experience with its banked speedway oval taking drivers from 30-degrees to zero. It’s all happening midway through the season and the teams are in a rhythm and bringing their A-game. So we’re delighted how the event turned out, bringing together such great teams for the 100th round in front of awesome fans. It’s been a great event.” 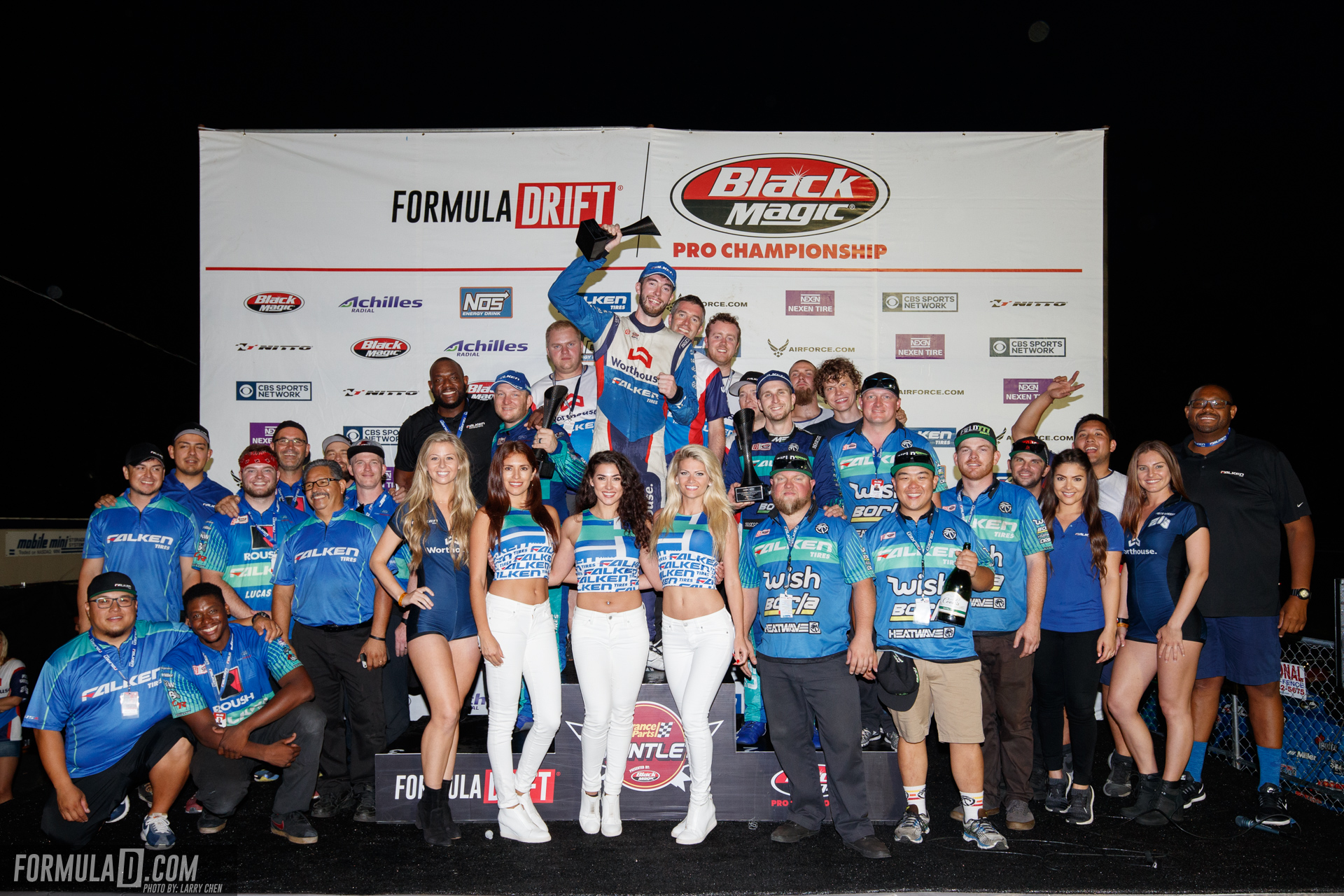 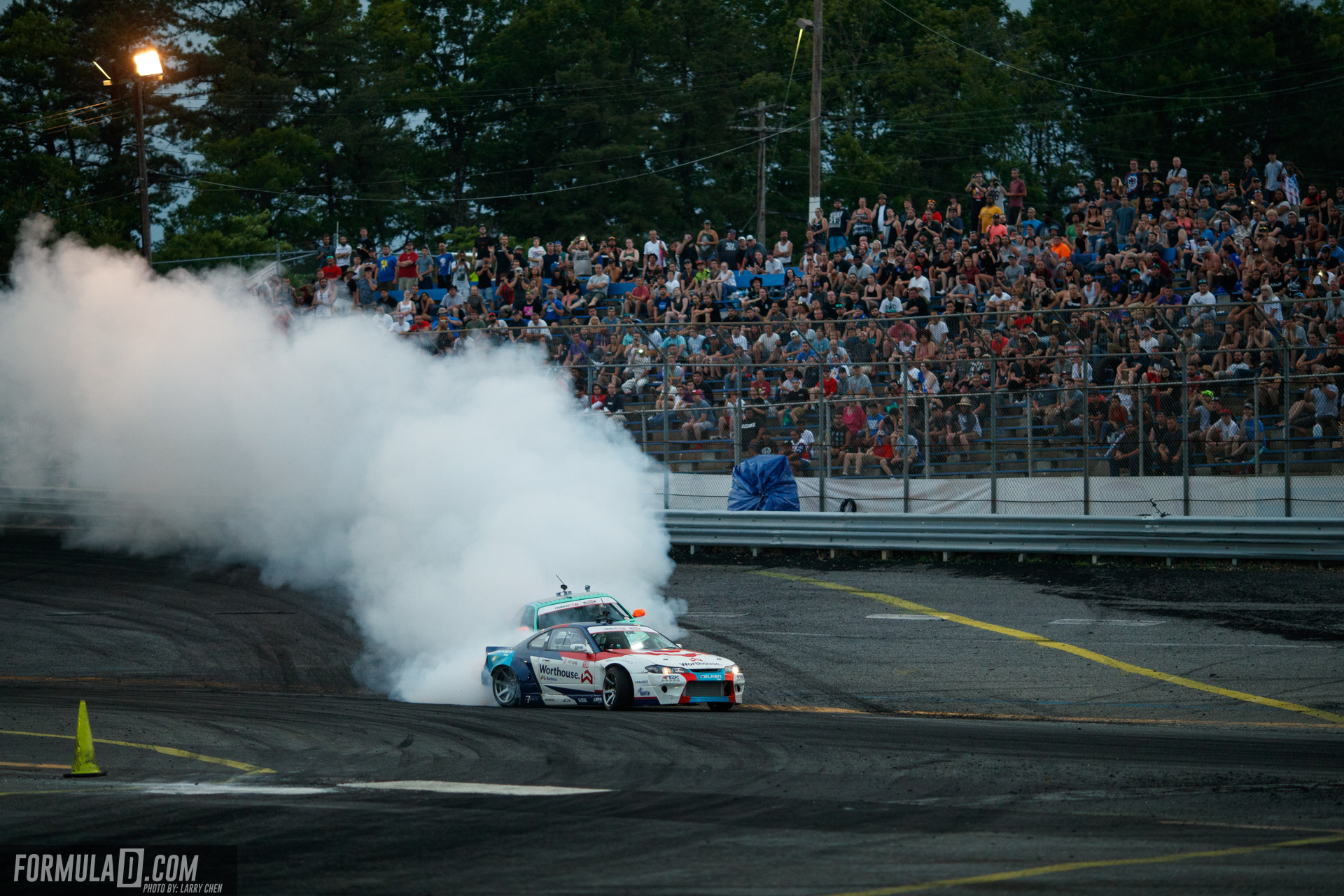 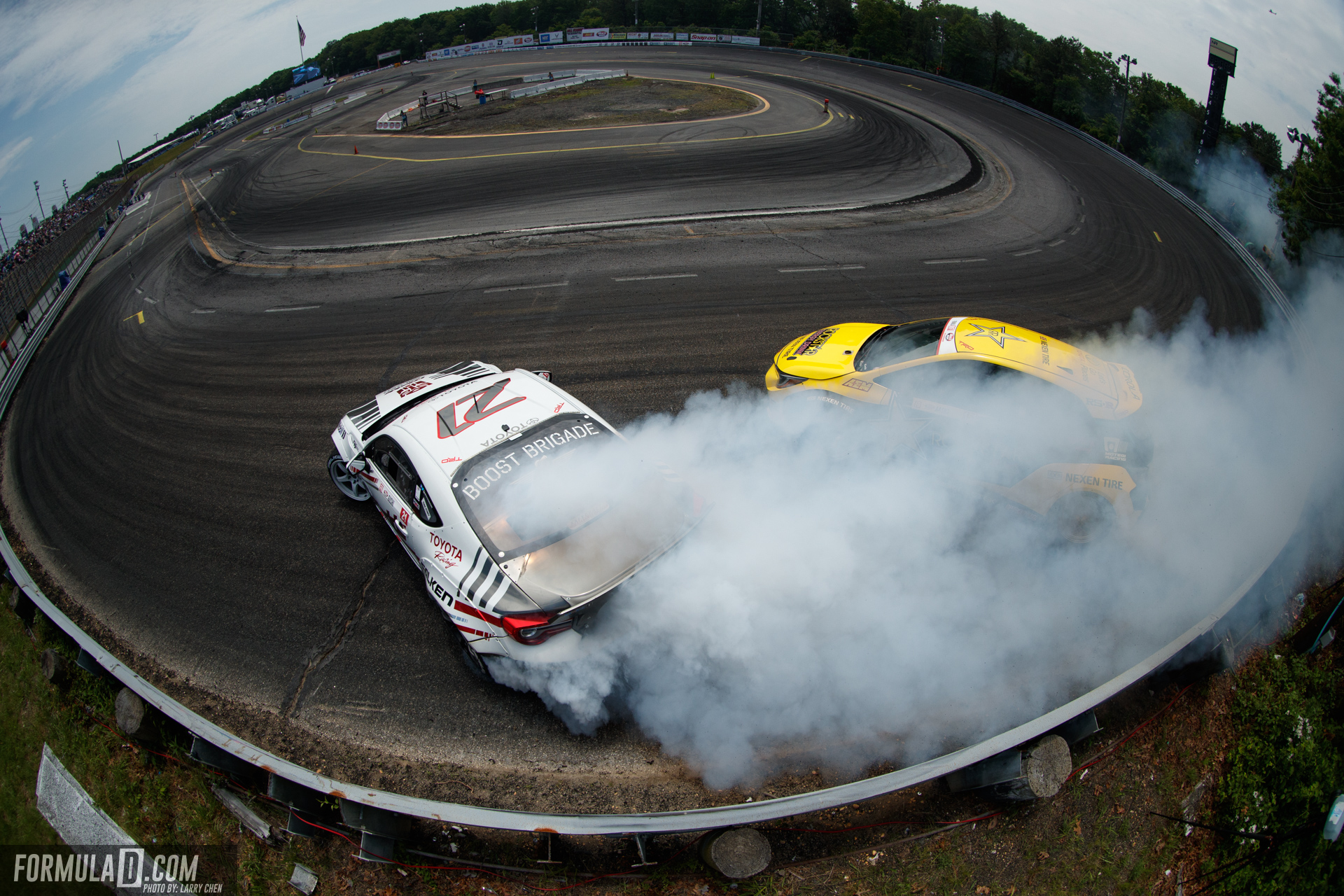 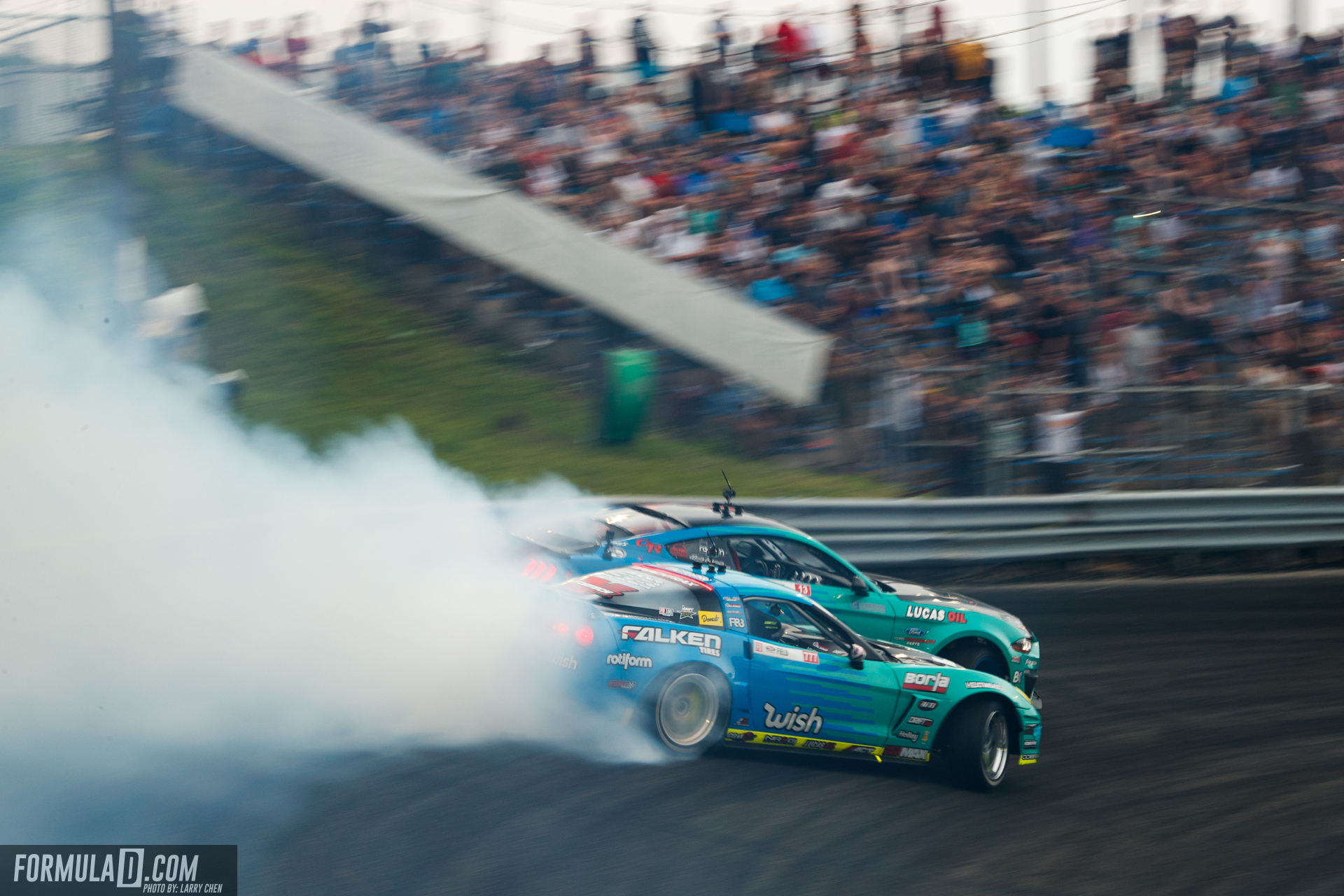