After struggling with speed in Round 3, I had a lot of work to do. I didn’t know if the work was needed on the car or my driving style. It turned out to be both. 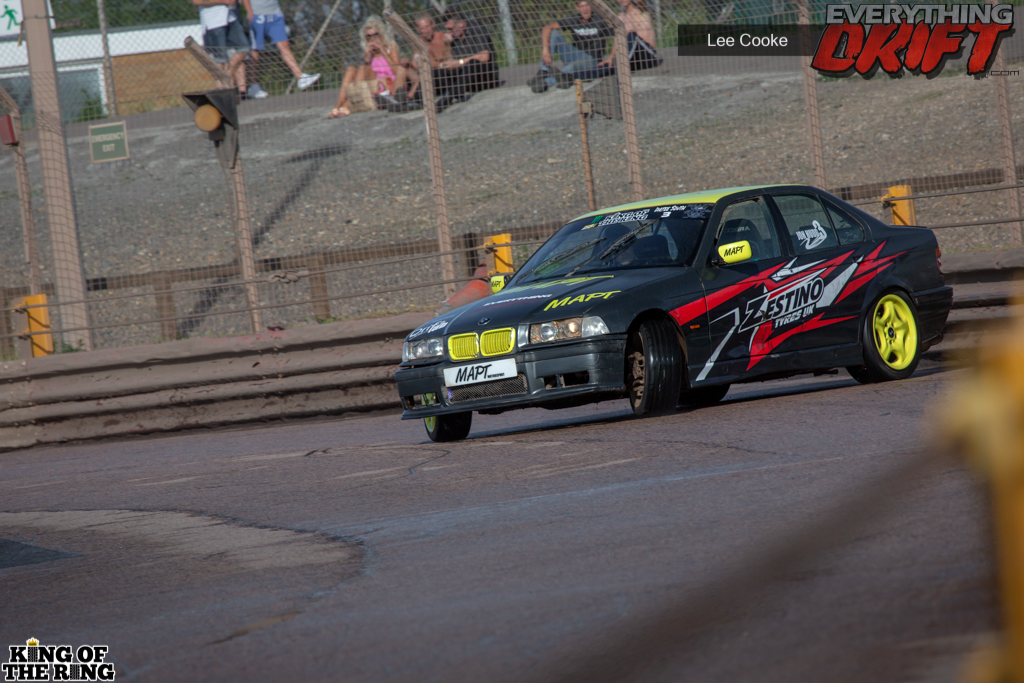 It was a scorching day, so we parked in the shade, got set up and made it out on track nice and early. Straight away I knew the car felt better than it had all season. By the end of the 2nd lap I was entering with more conviction and was loving the new setup. 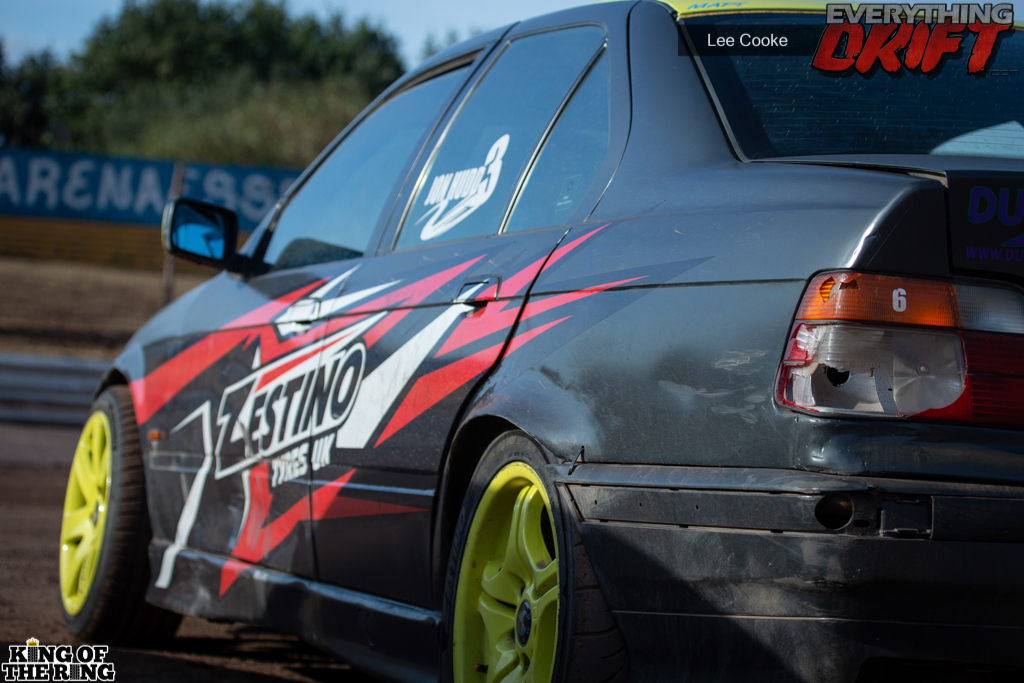 Unfortunately, by the end of the 6th lap there was a horrendous knocking noise coming from under the car. Upon inspection it was clear that the prop donut and centre bearing had both failed. The car wasn’t usable, and I didn’t have the required spares. After calling everyone I knew in the area, Liam Barton collected a selection of parts from Spinksies Tyres & Spares and not only brought them to the track but helped me fit them. 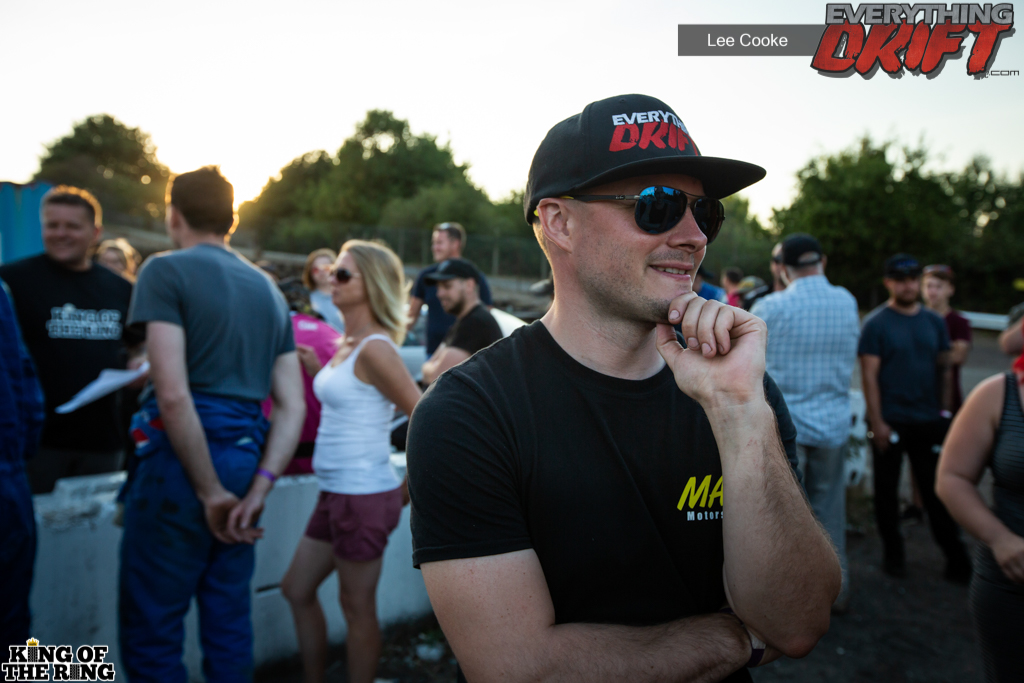 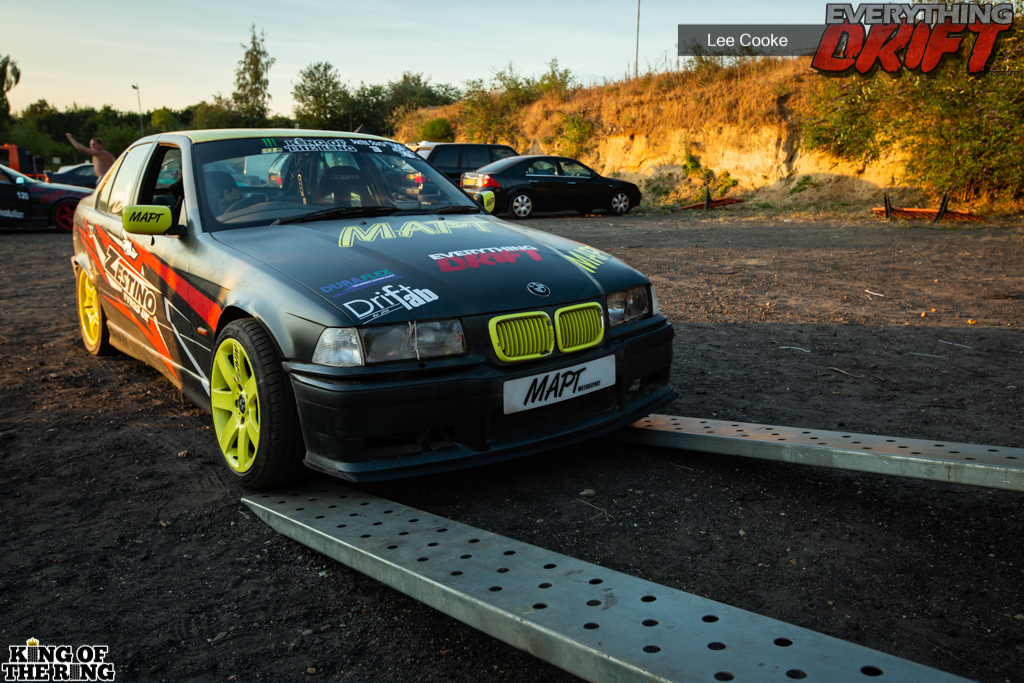 By 4pm I was back on track with enough time to squeeze in 3 or 4 sessions before qualifying. Given that we were missing Rhys Gamble this round, I thought I would jump in his shoes and put the first qualifying run of the night in. I knew after run that I was sat in top spot….sadly this was purely because I was first out and I was soon knocked all the way down to 13th. 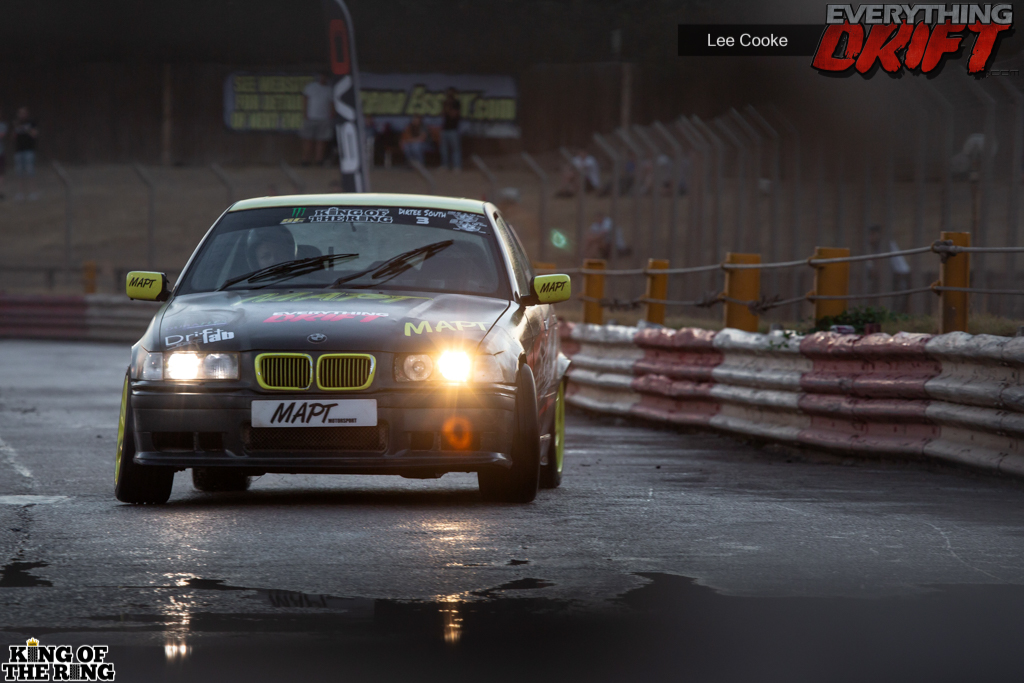 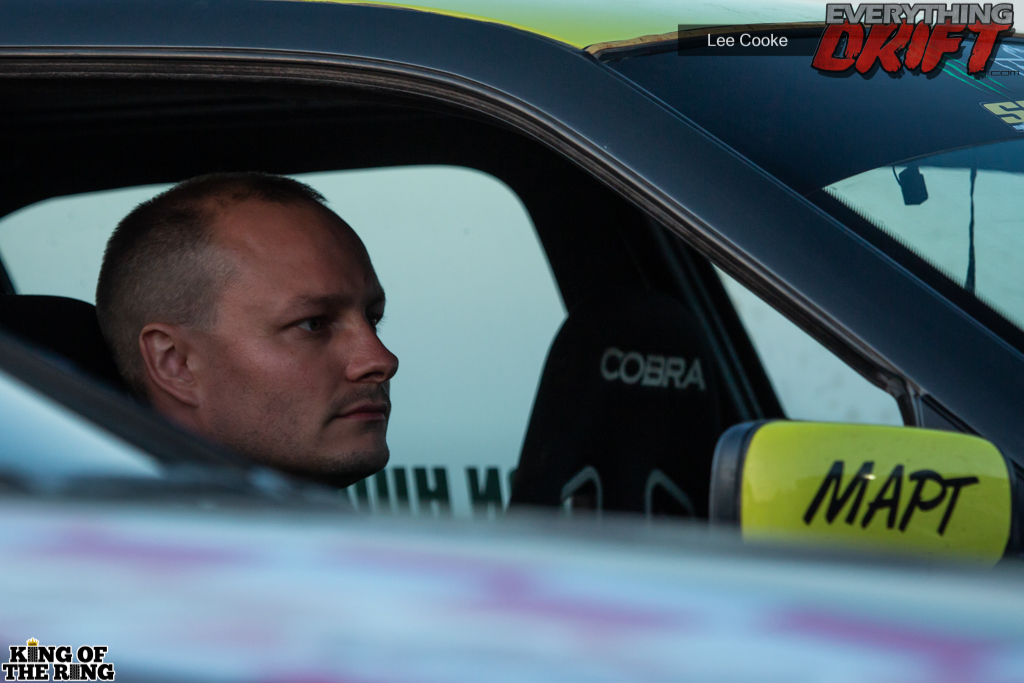 My first battle was against Chris Fairway-Snow from Zefslide. Chris is new to KOTR and drove really well, but his tyres were no match for the Zestino Softs allowing me to get through this round due to better proximity. 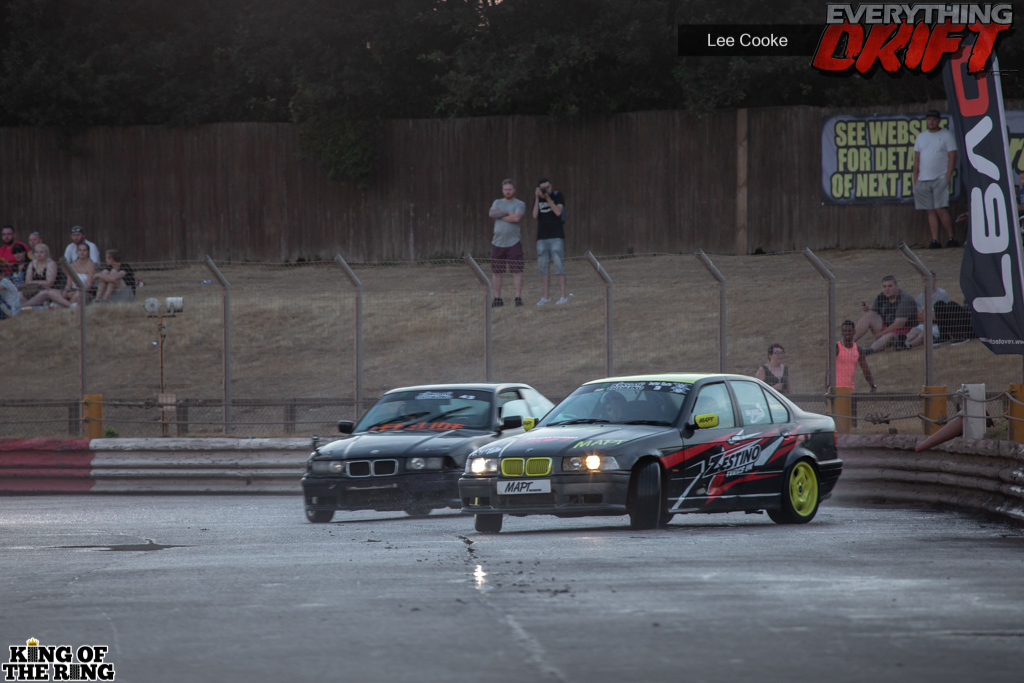 The next battle was for the top 16 and this is where my qualifying result came back to haunt me. I was against Alister Sutton…. The 2016 KOTR Champion, 2017 Drift Cup Champion & the man currently sat in 2nd place in the 2018 BDC Pro-Am Championship. All in a BMW 328i. Alister is arguably one of the best drifters in the UK. I have battled and lost to Alister twice before, so I knew that I had it all to do. As we entered the first corner I dived towards his door and stayed with him throughout the wall run. By the top corner he was pulling away. I took chase down the back straight and got close again for the final wall run. 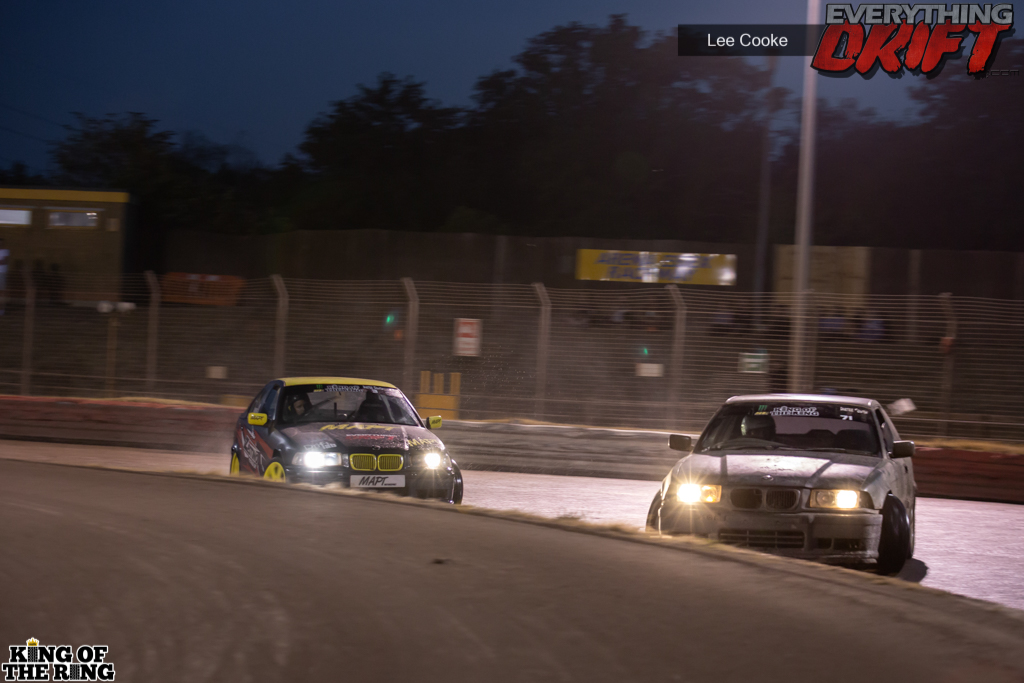 I was pleased with my chase but being against Alister, it wasn’t enough. He remained glued to my door for the majority of his chase run. The judges couldn’t call it, they announced a one more time. I was so excited to battle again, and I went all out! I managed to stay slightly closer this time throughout the entire run. I really really wanted it and gave it everything I had. All that was left was a clean lead run. I did this but could not shake Sutton… it ended up with 1 point between us! I was over the moon when it was announced that I had edged through to the next round. 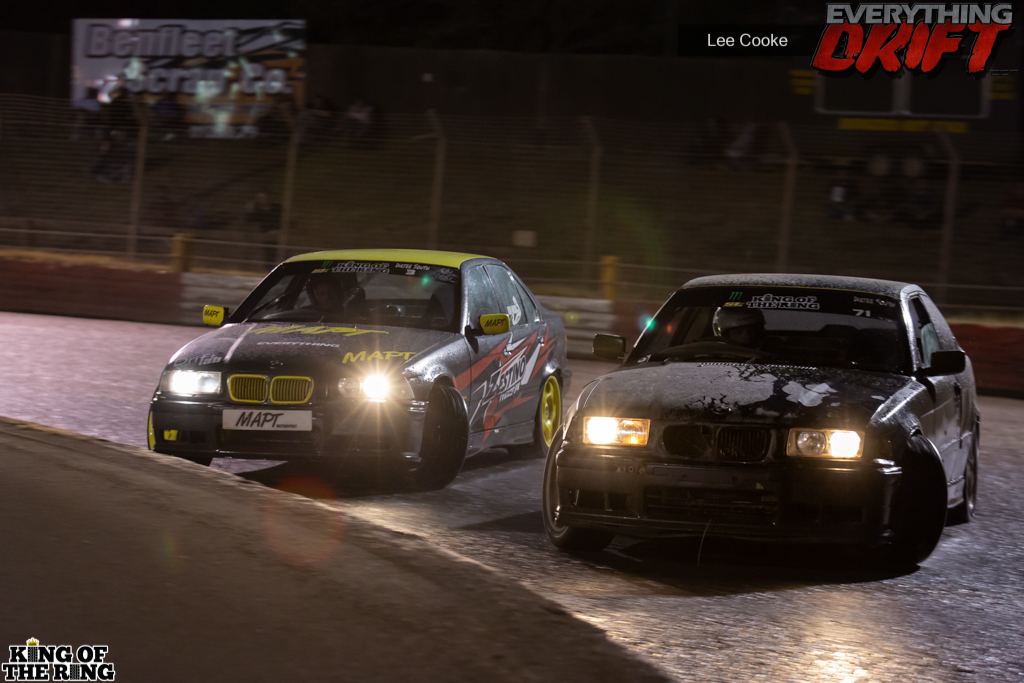 I drew my friend Peter Spinks for the Top 8. The man who had helped me get back on track with parts earlier on in the day. Pete is well renowned as a fast driver who never gives less than 100%. Tonight would be no exception. As we regularly practice together, I knew I couldn’t given him an inch. He shot off and entered with a bit of a lead. I took chase as best I could and thankfully had a clean run which meant I made it to his door by the last corner. Peter had recently switched from his usual Zestino tyres to Westlake and this may well have been the reason why I edged this battle and took the win due to slightly better proximity. 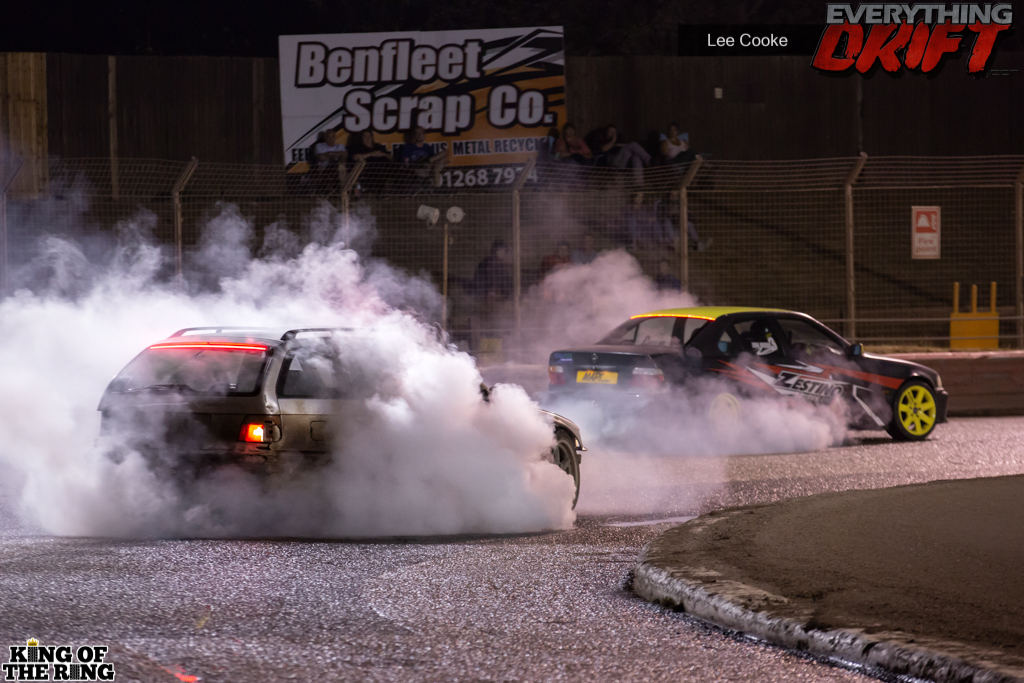 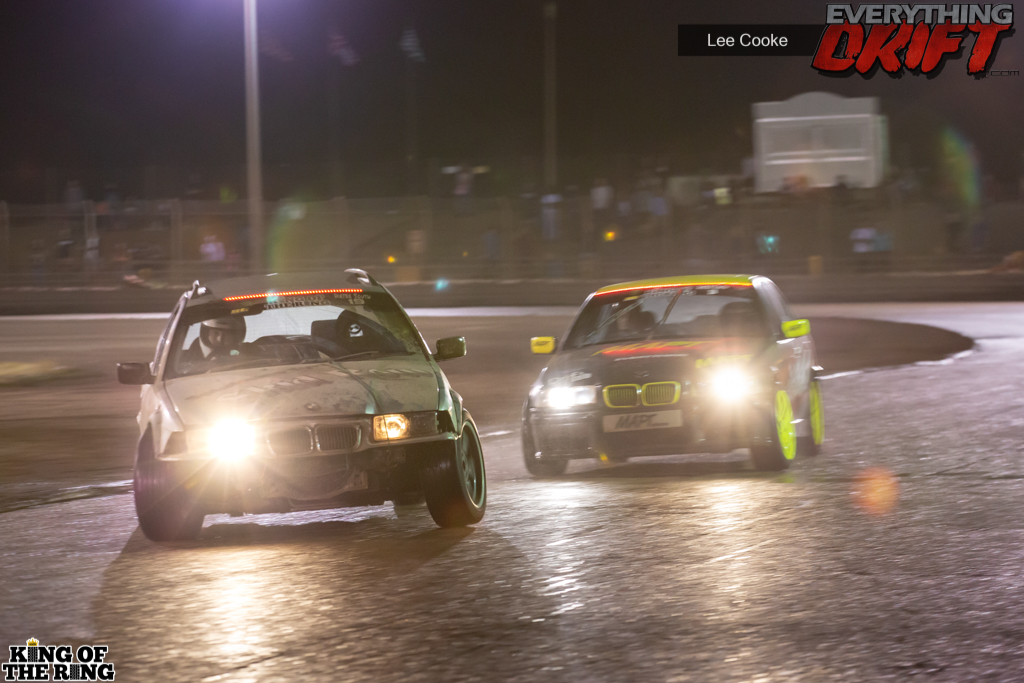 I was now into the top 4 but had drawn Mark Chapman. Mark is not only my team mate but also the very person who I train with every 2 weeks. Mark had qualified 1st and clearly looked like the hot favourite to win this round. We put some heat into the tyres and away we went. Mark led, I knew his run would be faultless and I was correct.

It’s a shame the same couldn’t be said for my lead. Feeling the pressure of the green eyed monster breathing down my neck, I entered too fast and understeered towards the wall. A split second before impact I regained grip and carried on with the unmistakable sound of Marks engine ringing through my ears just inches from my door. Not being able to create a gap, I felt the pressure starting to mount. I entered the next clip and made a huge error completely shutting the door on Mark leaving him sandwiched between me and the inside kerb. Mark did the honourable thing and chose the kerb over colliding with my car and as a result sacrificed the battle by just 1 point. 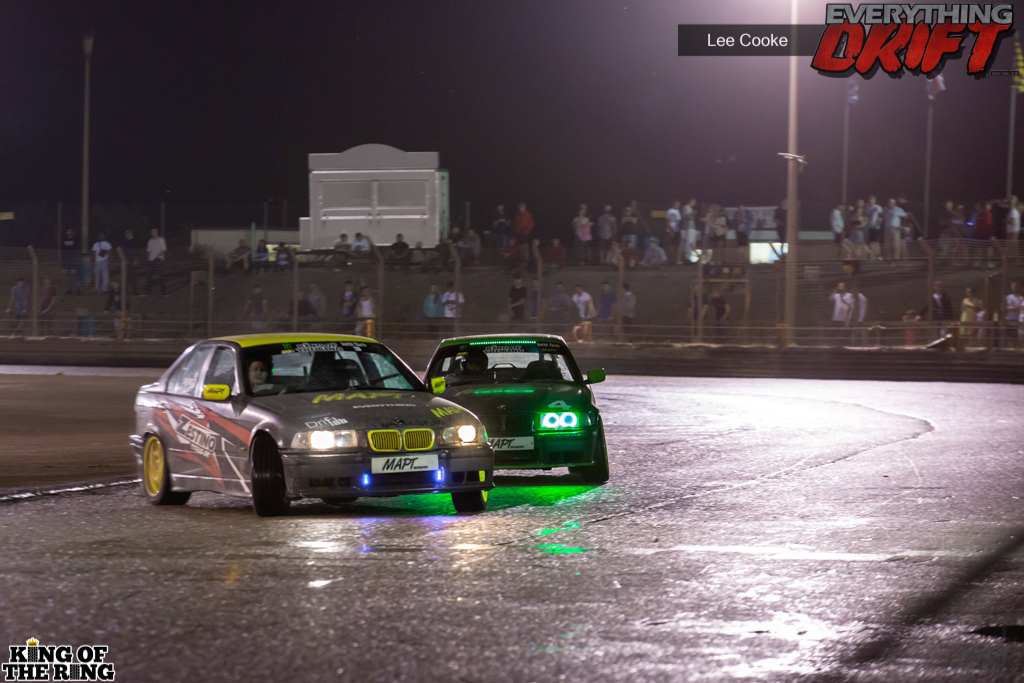 This had put me in the final against Jamie Stanton. Jamie works for Learn 2 Drift so has plenty of seat time. I knew this would be a tough battle. He is a very aggressive driver, so I entered the first clip hard. I had a small understeer moment resulting in a slight nudge and giving Jamie the advantage. 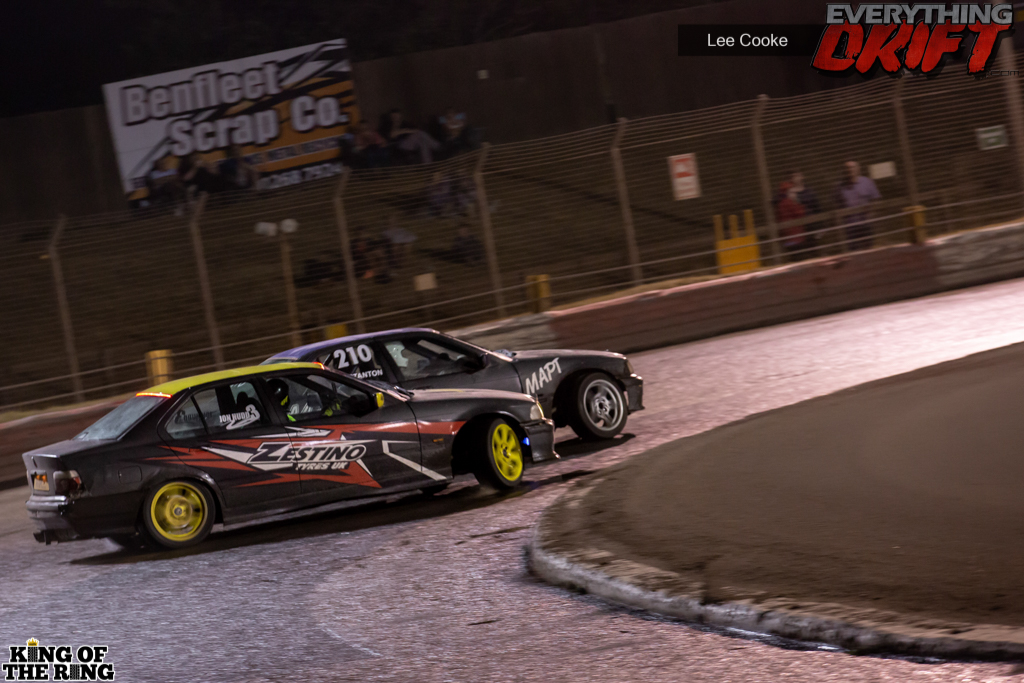 I put on a good lead run but there was no shaking Jamie, he wasn’t willing to go home without the win. To my shock, we were sent for a one more time. 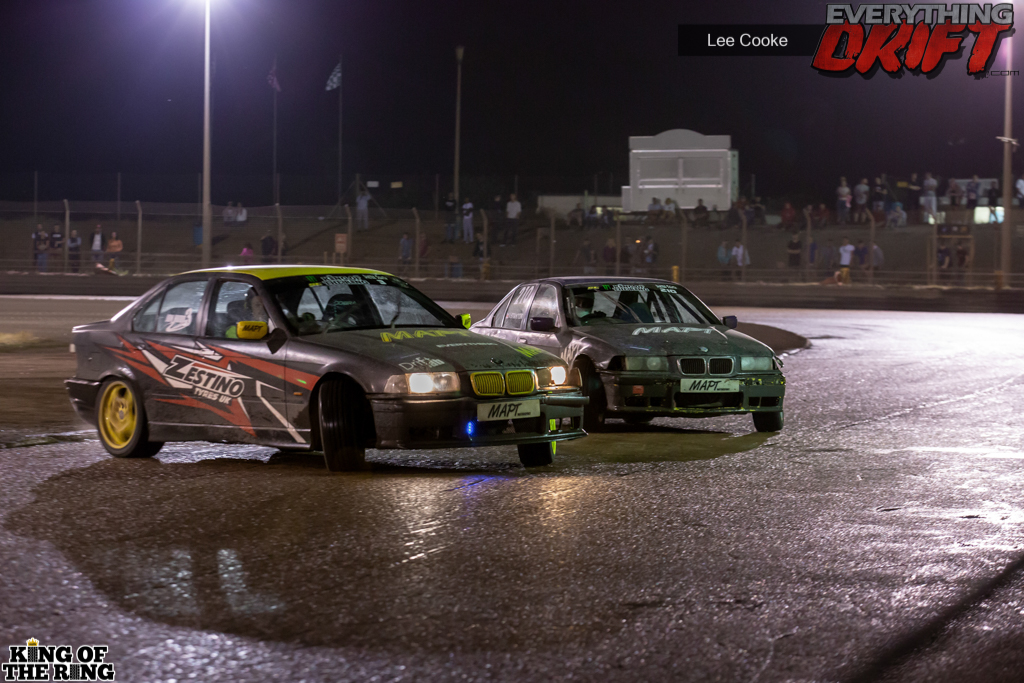 This was my chance. I got a little caught up on Jamie’s rear bumper at the start due to entering too early but other than that was pleased with my chase run. We took off for my lead run and I was being hunted down right from the start. Jamie took a huge dive and was on my door from the very beginning of the corner. He kept this close proximity for the entire lap leaving the judges with a clear winner – Jamie Stanton. 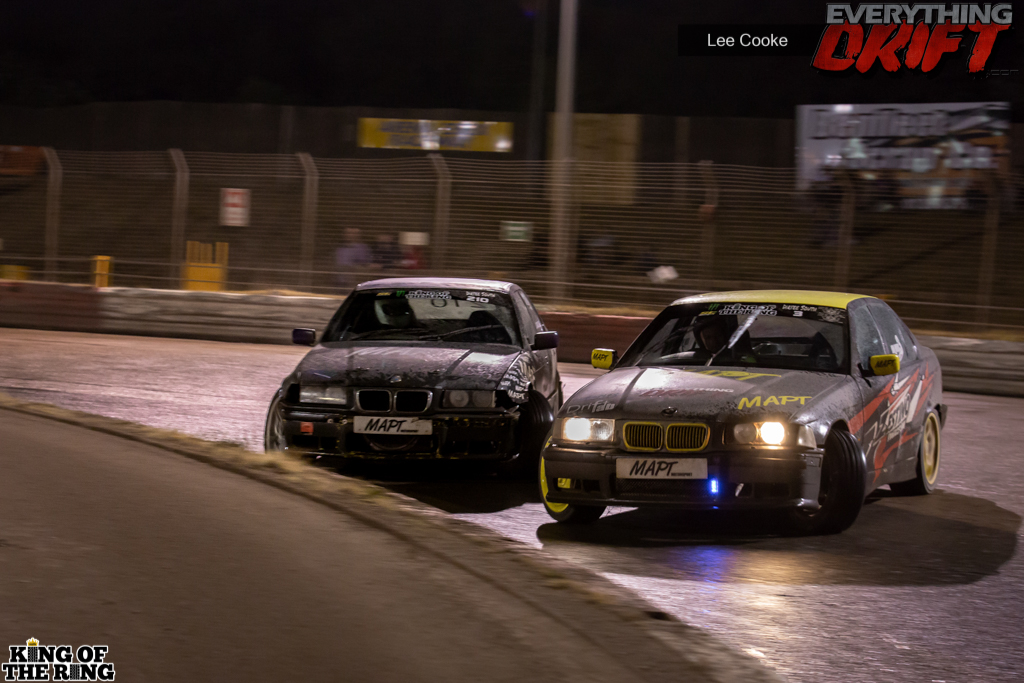 We had finally done it. MAPT Motorsport made history as the first ever team podium lockout at King of the Ring. 1st Jamie Stanton, 2nd Jon Hudd & 3rd Mark Chapman. We are so proud that all the hard work has paid off. I cannot thank my sponsors, friends, family and supporters enough. 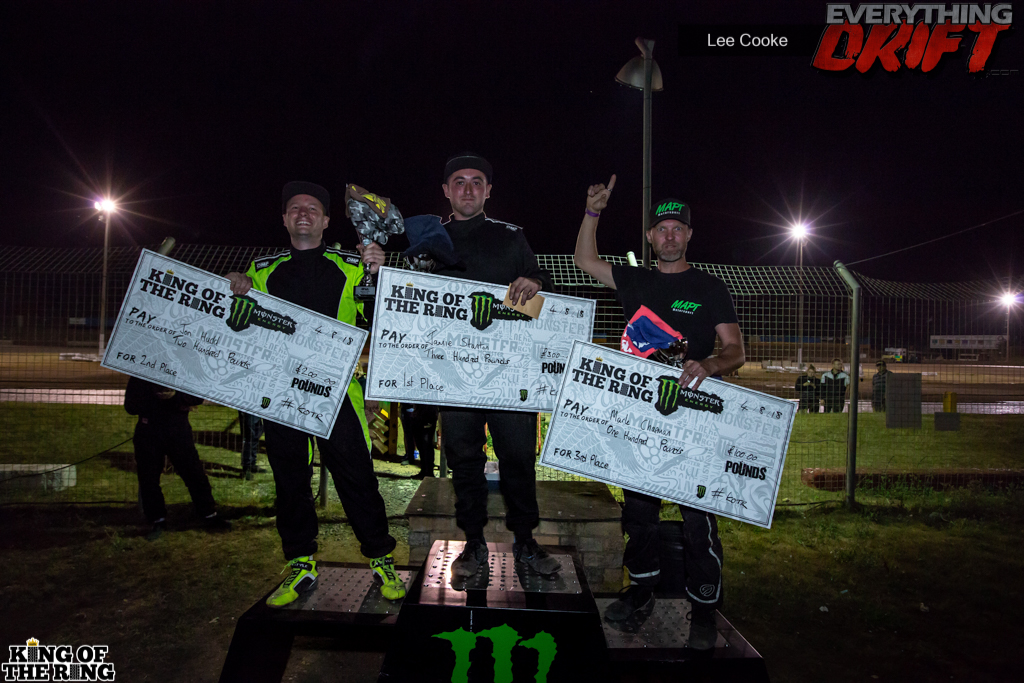 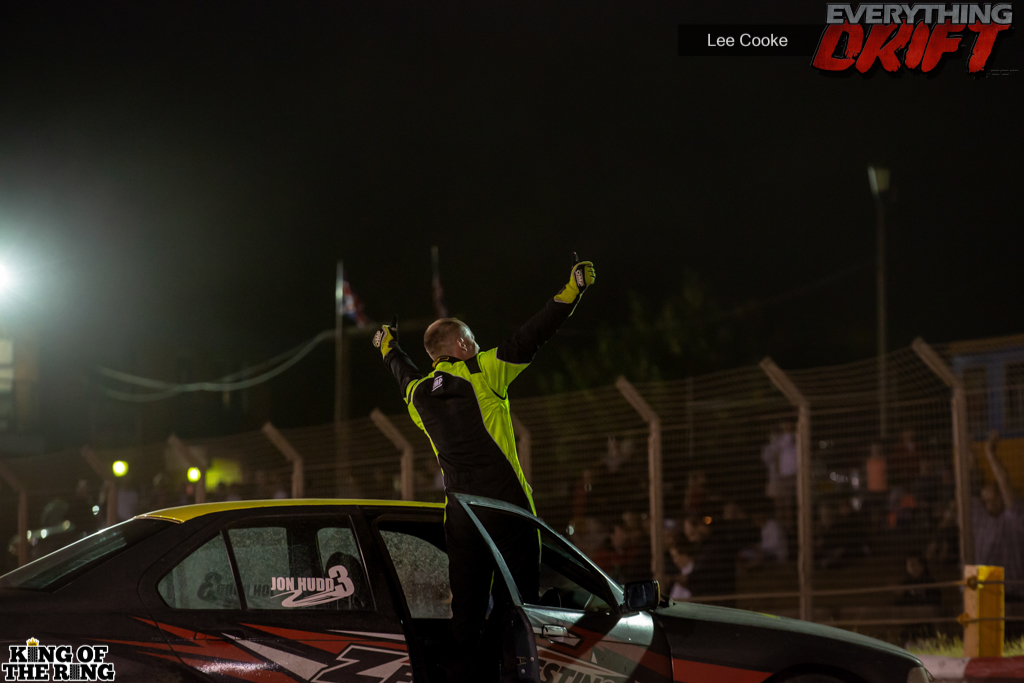 We hope to see everyone again for Round 5 on 1st September. There are due to be a few big names coming back for the last 2 rounds so don’t miss out. 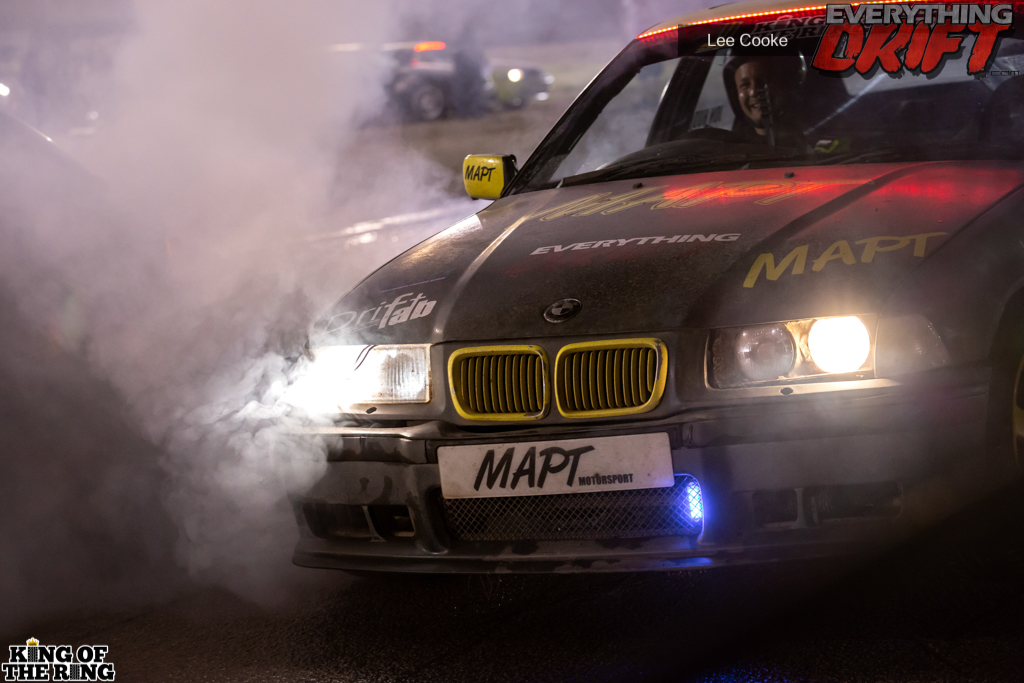