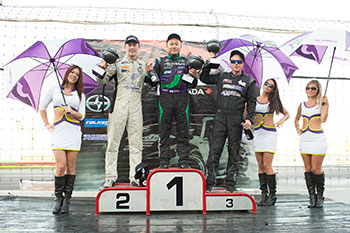 The competition had twenty-one entries. The Top 16 was composed of 8 FD Pros from USA, Japan, Norway, Hong Kong and Ireland and 8 Canadian regulars.

The enthusiasm for drifting in Canada has always been strong and we had looked at Canada for sometime but without the right combination of key partners such as Autodrome St. Eustache we could not have felt confident to crossing the border, said Jim Liaw, president and co-founder of Formula DRIFT. “We have all been blown away by the level of driving and energy that the fans brought the entire weekend. This was one of, if not the biggest drifting competition ever held in Canada.

“I had a great time at Formula Drift Canada. The fans were amazing and they made us feel right at home, said Daigo Saito, winner of Scion presents Formula DRIFT Canada presented by Falken. I was excited to win the event, and to stand on the podium with my Achilles teammates, Dean Kearney and Kenny Moen!”