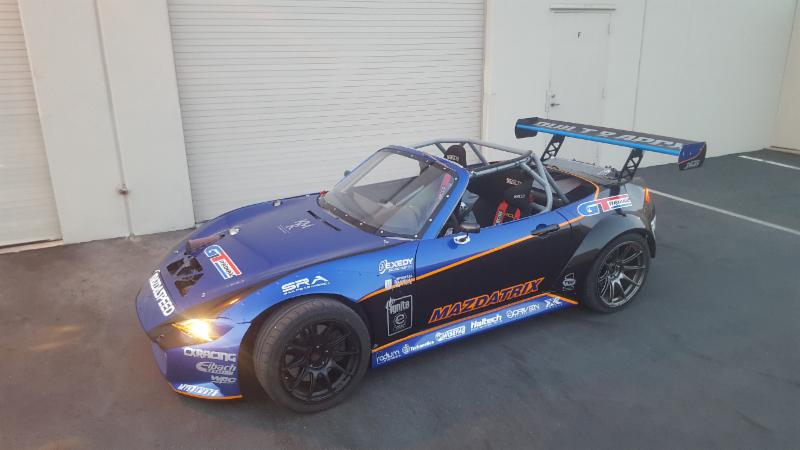 April 4, 2016 (Signal Hill, Calif.) – The new Formula Drift season will bring a new vehicle for Formula Drift veteran Kyle Mohan, who will park his familiar Mazda RX-8 for a new car built on the Mazda MX-5 platform.
The KMR-built Mazda MX-5 is new but in some respects will be familiar to Mohan, as it is powered by a turbocharged, nitrous-fed three-rotor engine developed by Mazdatrix. Improvements to virtually every aspect of the drivetrain has resulted in more horsepower than the engine has produced before,
“I think ever since we first built the RX-8, we always considered what kind of car we would eventually replace it with,” said Mohan. “However as a small team, we always felt that we would be better off by continuing to improve the RX-8 instead of trying to build an entirely new car. But we made the decision last season to switch to the MX-5, and not only that, to build it to make the best use of our GT-Radial Champiro SX2 tire package. Considering how quick and nimble it felt in our first tests, I think we’ve accomplished that.”

END_OF_DOCUMENT_TOKEN_TO_BE_REPLACED

June 10, 2015 (Orlando, FL) — Formula Drift entered Orlando Speed World for the first time for Round 3: Uncharted Territory — a new venue for this series that proved challenging for competitors with heavy rain and a bumpy circuit. Kyle Mohan Racing’sGT-Radial / Mazdatrix Mazda RX8 features a 1000hp three-rotor 20B engine. In front of a packed house on game day, Mohan battled hard against Ken Gushi, going door-to-door around the oval track through thick clouds of GT-Radial smoke. Gushi prevailed in the tandem battle by a slight advantage, but Mohan was proud of his vehicle’s performance and handling as well as aggressive driving style. Mohan later said, “I’m pleased with the vehicle’s setup, and I can push the car to the limit even on a race track new to us.”The team looks forward to Round 4 at Wall Motor Speedway in New Jersey on June 26 and 27.

A winter’s worth of development has taken place under the skin, and the three-rotor car will line up for Formula Drift Long Beach leaner and meaner than it did in 2014. While Mazdatrix has been able to extract additional horsepower from the three-rotor engine, every other part of the car was updated or improved before being wrapped in a new design ahead of Tuesday’s Long Beach Grand Prix media day.

END_OF_DOCUMENT_TOKEN_TO_BE_REPLACED

March 28, 2014 (Signal Hill, Calif.) – The final piece of the 2014 season puzzle for Kyle Mohan Racing has fallen into place as the team has announced that it will partner with GT Radial for the 2014 Formula Drift Pro Championship.

END_OF_DOCUMENT_TOKEN_TO_BE_REPLACED

May 8, 2013 (Signal Hill, Calif.) – It was a minor error that prevented Kyle Mohan from advancing past the first round at the Streets of Long Beach in the Nexen Tire / Energy-X / Mazdatrix Mazda RX-8. While scraping bumpers and pushing the limits is part of every Formula Drift run, the cone that Mohan knocked over was an out-of-bounds cone – meaning he would score a zero while going against Ken Gushi. Despite putting up two strong runs, he would not advance into the second round.