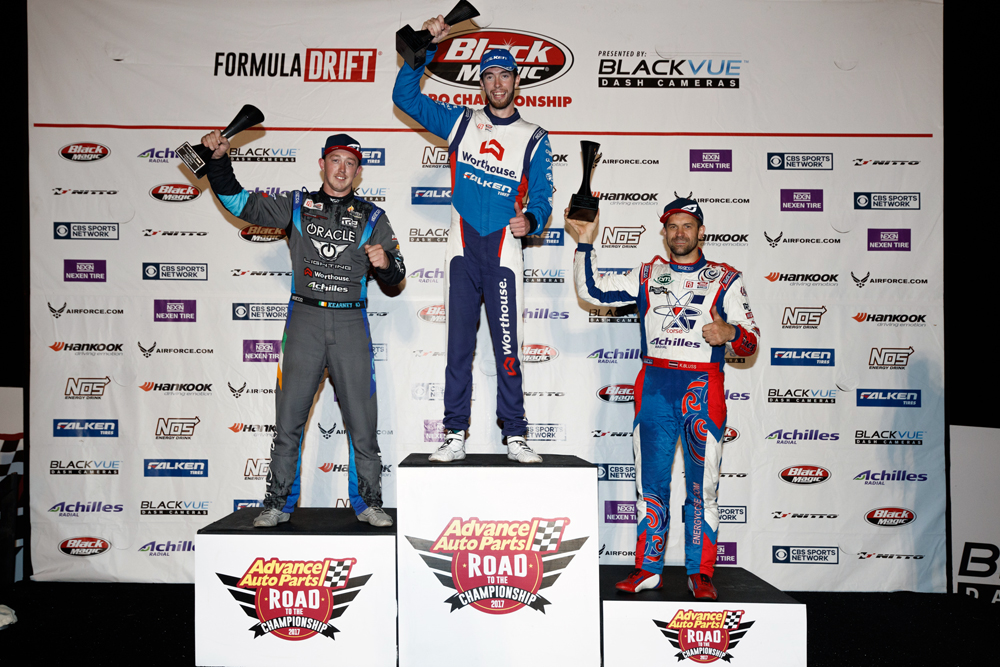 ATLANTA, GA  – Team Falken continued its winning ways when Falken driver James Deane scored yet another first place finish in Round 3 of the 2017 Formula Drift Championship at Road Atlanta.  Deane fought tough battles all evening to take top honors and move into the lead for this year’s Black Magic Pro Driver’s Championship.Twenty-eight entries qualified for Road Atlanta, with Falken teammates Matt Field in 4th; Justin Pawlak in 9th; Piotr Wiecek in 11th, Deane in 13th; and Daijiro Yoshihara, 23rd. Deane, piloting his Nissan Silvia S15, and running on Falken AZENIS RT615k+ tires, continued moving forward, defeating Dean Kearney in the final.  His podium finish continues a record of strong finishes at Road Atlanta, which was the 14th time Formula Drift had visited the legendary racetrack.“This is an important win for us,” stated Steven Wong, Supervisor, Passenger Car Events. “Falken’s continued success in Formula Drift with our new AZENIS RT615K+ once again proves that this tire is a strong, consistent championship contender.“Deane has proven to be an excellent representative of Falken, on and off the track,” Wong continued.  “His exuberance is just remarkable.  You can hear it in his voice every time he steps out of his car.” END_OF_DOCUMENT_TOKEN_TO_BE_REPLACED

NASHVILLE, Tenn., April 4, 2017 – Hankook Tire driver Ryan Tuerck battled his way to a podium finish at the opening round of the 2017 Formula Drift season. Ryan kicked off his second season with Hankook Tire by placing third at Formula Drift Round 1: Streets of Long Beach last weekend.

The pursuit of the Driver’s Championship Title and Tire Manufacturer’s Cup started with an exciting weekend of action. With dry track conditions and warm temperatures, drivers got off to a fast start at a racetrack known for its narrow turns and high-speed entry points. After a solid top three finish in the qualifiers, Ryan earned himself a first-round bye and then advanced to the semifinal round driving his signature Toyota GT86 on Hankook’s new Ventus R-S4 tires.

“It’s amazing to kick off the 2017 season with a podium finish and great support from all our partners including Hankook,” said Tuerck. “This was the first race using the Ventus R-S4 tire, and it not only provided amazing grip, but the stiffer sidewalls and new compound allowed us to get a longer life out of the tire while maintaining consistency throughout all of our runs.” END_OF_DOCUMENT_TOKEN_TO_BE_REPLACED

HUNTINGTON BEACH, CA – March 27th – Bridges Racing is proud to announce the race support and logistics of the Worthouse Drift team for the 2017 Formula Drift Black Magic Pro Championship, presented by Blackvue. Operating out of their Huntington Beach, CA shop, Bridges Racing will be conducting race prep, on-site track support, and logistics for all eight rounds of the championship. In addition to supporting the twin Nissan Silvia S15 cars of James Deane and Piotr Więcek, Bridges Racing will continue to support Dean “Karnage” Kearney’s Dodge Viper in the Formula Drift championship.

“I’m already impressed with the professionalism of Piotr and James, and feel that they will be a great addition to the Bridges Racing roster” said team owner Bryan Bridges. “Both of them are quite accomplished in European drifting, and their experience in the sport already shows. Combined with our experience of competing in the Formula Drift series over the past six seasons, I think this partnership could be a winning combination”. Bridges Racing has supported several international drivers over the past several seasons including Michihiro Takatori, Daigo Saito, Robbie Nishida, and Kenny Moen in addition to their current flagship driver Kearney. Kearney will continue his partnership with Bridges Racing for the fifth season, and is looking forward to building on his top 16 finish in the 2016 final standings. END_OF_DOCUMENT_TOKEN_TO_BE_REPLACED

The 2016 Formula Drift season’s come to an end, but what a season! And we couldn’t have done it without all of you!

It all came down to this: Formula Drift’s season finale at the infamous House of Drift, the round where a champion is crowned and the action is at its highest extreme.