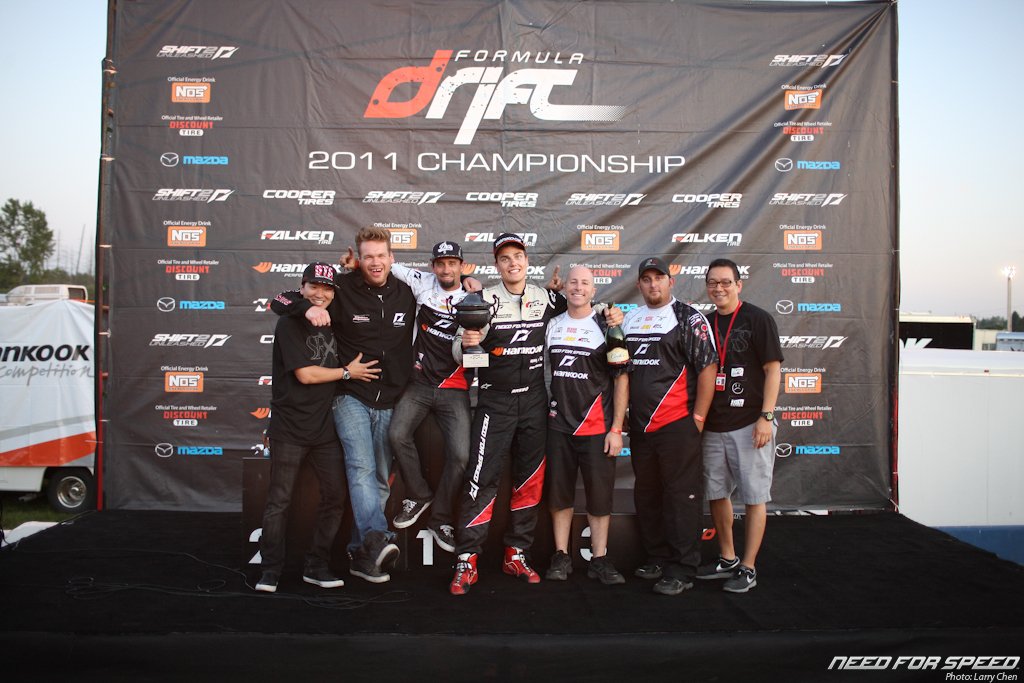 BALTIMORE, Md. (July 25, 2011) – Over the weekend, Team Need for Speed slid into Seattle for Round 5 of the Formula Drift Championship at Evergreen Speedway. The team had high hopes of a successful finish and they met that goal when Fredric Aasbo battled his way to a 3rd place podium position and Matt Powers took 11th place overall.

A sold-out crowd packed the house for Round 5, as eager fans filled the grandstands and the paddock in order to see their favorite Formula Drift drivers in action on and off the track. The Need for Speed Electro Lounge was lively all weekend, while fans got their chance to check out the Team Need for Speed cars, chat with the drivers, dance to the beats of DJ Miki Taka, admire the beauty of the Need for Speed girls, and lay down their best lap time in SHIFT 2 UNLEASHED. On track, both Team Need for Speed drivers qualified in the top 16 and were pumped to do some head-to-head drifting in the main event.

Fredric Aasbo faced Dean Kearney in the Sweet Sixteen. Fredric led first high on the bank and maintained intense angle through the course as he spewed Hankook Tire smoke at his following competitor. When following, Fredric stuck to the lead car throughout the entire run, shadowing its line. Fredric took the win and would move on to the Great Eight. Watch the VIDEO.

Matt met Dai Yoshihara in his battle of the top sixteen and would give chase first. Matt followed Yoshihara into initiation and stayed high on the bank, pushing to stay close to his competitor throughout the course. When it was Matt’s turn to lead, he initiated early on the bank, riding the wall. He transitioned off the bank and flicked his S14 right up against the K-rail into the rear clipping point with insane angle, unfortunately causing him to spin out and ultimately handing Yoshihara the win. Watch the VIDEO.

In the top eight, Fredric was matched with Tyler McQuarrie. The two competitors both gave it their all on the track, proven by the judges inability to declare a winner after two consecutive battles. In their final One-More-Time battle, Fredric was determined to make it clear-cut who had the advantage, and after two amazing runs by this Team Need for Speed driver, he did just that and would advance on to the Final Four! Watch the VIDEO.

In the semi-finals, Fredric found himself faced with Dai Yoshihara. Fredric would give chase first, and did a great job of mimicking his competitor’s line throughout the course, while maintaining high speed and deep angle. When leading, he put down a spectacular run, but it would not be enough for the judges to give Fredric the advantage, and he would move on to the consolation round to battle it out for 3rd place. Watch the VIDEO.

In the battle for the 3rd place spot atop the podium, Fredric was set to battle 2005 Formula Drift Champion Rhys Millen. Fredric gave chase first, and was able to reel into Millen after coming off the bank into the infield. When leading, Aasbo threw down an awesome run, as Millen followed him but with a more shallow line coming off the bank and correcting while going into the first rear clipping point. Aasbo would take the win and 3rd place overall at Round Five! Watch the VIDEO.

“Getting on the podium in Formula Drift has always been the ultimate dream for me, this time that dream came true for us. I couldn’t be more proud of being a part of this team!” says Fredric. With his podium finish at Round 5, Fredric moves up one spot to 11th place overall in the Formula Drift Championship standings, as Matt Powers maintains his 5th place position. Next up for Team Need for Speed, the team will put all the cards on the table in Las Vegas August 26-27th for Round 6: After Dark, at Las Vegas Motor Speedway. For more information on Team NFS visit TeamNeedforSpeed.com, become a fan at Facebook.com/NeedForSpeed, or follow NFS on Twitter @NeedforSpeed.