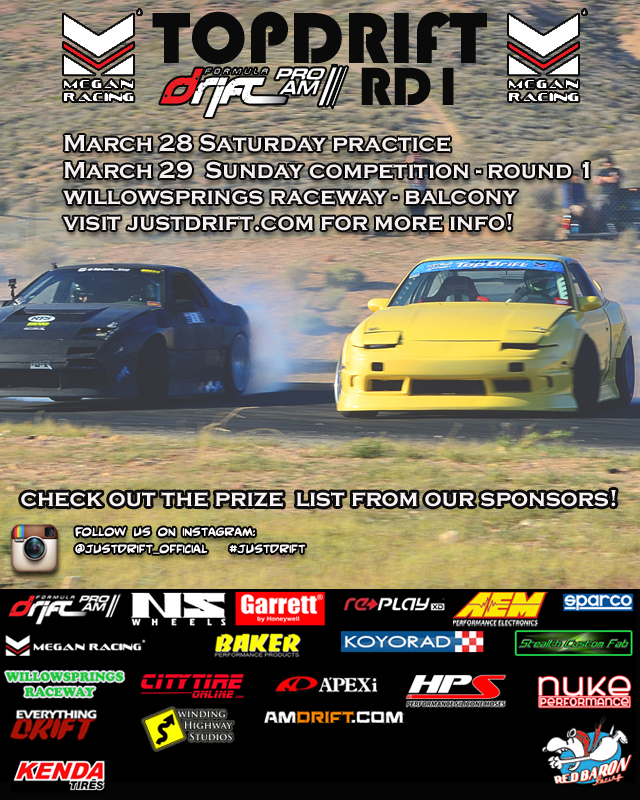 Registration for Just Drift TopDrift Formula D ProAm Round one is now open. Head on over to www.justdrift.com for registration and all other event information.

Always and blast with these guys around. And be sure to check out Replay XD Cameras

Replay XD and Formula DRIFT have teamed up to undertake a huge video production by mounting multiple Replay XD cameras to all 14 of the Team DRIFT vehicles and film all the action on and off the track for an online video release to come after the event. Replay XD will become the exclusive POV camera for the Team DRIFT event and also be branded on each vehicle.

We are excited that Replay XD has seen the opportunity to partner with us on the Team DRIFT event, said Ryan Sage, vice president and co-founder of Formula DRIFT. This event is always a fun weekend for Formula DRIFT and the participating drivers, but now this partnership will allow fans to see how amazing 14 drift cars unleashed on the Toyota Grand Prix of Long Beach Street Course can be. Fans will be able to see every initiation and all door to door drifting from every single drivers point of view.

Were all racers and enthusiasts here at Replay XD, and drifting has really pushed the envelope of what is possible in a car. Weve been long time supporters of grassroots drifting, and are excited to take the next step by working with Formula DRIFT, said Replay XD President, John Spar. Having a chance to use our XD1080 to bring a first-hand, HD experience of team drifting on the streets of Long Beach to Formula DRIFT fans and drifting fans everywhere is quite an honor.

The Formula DRIFT Team DRIFT Challenge will take place on Friday, April 13 at 9:35 AM, Saturday, April 14 at 8:55 AM and the main competition will be held on Sunday, April 15 at 3:40 PM during the Toyota Grand Prix of Long Beach event.