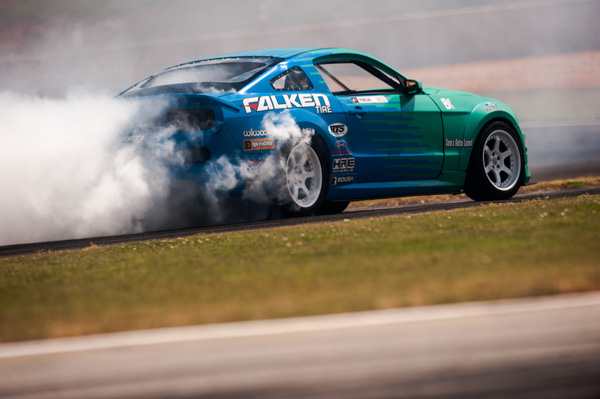 BRASELTON, GA – Team Falken, a two-time manufacturer’s champion in Formula Drift, keeps applying pressure to its competition, and after Round 2 at Road Atlanta, has Falken team member Justin Pawlak in 5th place overall.

Though eventual event winner Vaughn Gittin, Jr., defeated Pawlak in the Top 16 Round, the match between the two was deemed the “battle of the weekend” as the drivers went through two hard-fought “One More Time” rounds just as rain blanketed the track.

Playing to a capacity crowd at this well-known road racing facility, Pawlak, along with his Falken teammates Daijiro “Dai” Yoshihara and Darren McNamara ran hard over the two-day event and between rounds Saturday, greeted more many fans who stopped by Falken’s Activation Booth to collect autographs as well as receive Falken giveaways and posters from the brand’s Spokesmodels.

Bad luck greeted both Dai and McNamara as Yoshihara suffered damage to his new Falken BRZ during practice and McNamara experienced engine issues early but kept his effort strong enough to gain points.  He is ranked 9th in the championship standings while Dai sits at 22nd.

Falken continues to utilize the demanding conditions of drifting to test durability and grip of its AZENIS line of tires.  The AZENIS RT615K tire used by all three drivers in Formula D is extremely balanced for many of today’s sports cars, performance compacts and sedans.  It is available in 21 sizes, from 14- to 18-inch.

Pawlak, who has recently represented Falken, Ford Motor Company and Roush Performance at several key Ford and Mustang celebrations in Southern California, was positive about the evening’s progress.“Formula Drift wouldn’t be interesting if it weren’t competitive and this series attracts teams and drivers who are all getting closer and closer,” he noted.“We’re learning, improving and moving forward.”

Round 3 of the 2013 Formula Drift Championship will take place May 30-31 when drivers will endure the Miami Heat at Homestead-Miami Speedway in South Florida. The schedule for this year’s racing events can be found at:http://formulad.com/schedule/pro-championship/

« BHP Performance Show at Lydden Hill
DriftBasic – Round 2 of the Grassroots Drift Series May 18th, 2014 »