As featured in the June 2007 issue of Honda Tuning 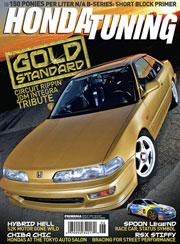 We bumped into Eric O’Sullivan at the Formula D final at Irwindale, and when we heard about his F20-powered AE86, our ears perked up. A few months later, post SEMA and holiday rush, we finally got the chance to get the car photographed and sit down with Eric to talk about his car, and boy were we in for a treat! Hopefully, Eric will find a way to bring his car stateside and find a way to get into a Formula D event or two! END_OF_DOCUMENT_TOKEN_TO_BE_REPLACED

Following damage sustained to the Gardella Racing Mobil 1 Pontiac Solstice during the first qualification session, O’Sullivans efforts during his remaining pass of the course failed to reach the mark required for passage into the main competition on Saturday October 8th.

Greatly dissapppointed with the result, O’Sullivan was confined to spectating at the sell out finale and reflect on what was a challenging year for the 2009 Formula Drift rookie of the year.

“Irwindale Speedway will test every aspect of a car and driver,” explained O’Sullivan. “Unless you’re 100% comfortable and committed to the course, and with such an unbelievably strong grid of drivers, you can’t just expect to make the grade.  Today we fell short and the result is not a fair reflection of the efforts that we put in as a team during 2011.”

END_OF_DOCUMENT_TOKEN_TO_BE_REPLACED

Stephen Brooks dropped his “Showreel” this weekend, which touches on some of his works in and around the drifting circuits, & car shoots that he’s been attending. Stephen is a modern day visionary when it comes to filming drift, he has a knack for tapping into certain filming styles that we dont ordinarily see. We were lucky to have him at the Wall NJ event this summer with Gardella Racing, where he filmed what we would consider one of the most spectacular edits of 2011, “Drifting The Guantlet”
Which can also be viewed here

Check out as Mobil 1 took some time to spotlight Eric O’Sullivan. Nice little video and well deserved spot on the Gardella Team for EOS.

DRIFTING THE GAUNTLET : Gardella Racing from Stephen Brooks on Vimeo.

Stephen Brooks definitely does a superb job on capturing the Gardella racing team while at Round 4 of the Formula Drift series at Wall Speedway. View this video…

We’ve just received these exclusive shots from Team Hankook drifter Eric O’Sullivan of a recent photo launch for Need For Speed Hot Pursuit and Toys 4 Big Boys exhibition in Dublin. O’Sullivan has teamed up with giant game publisher Electronic Arts to bring elements of Need For Speed Hot Pursuit to life as part of the live action arena at one of Irelands biggest events.

EA Need for Speed™ Hot Pursuit is the official Videogame at this years show and the Live Action Arena will showcase top Irish drift driver Eric O’Sullivan as he takes on his opponent in a live cops vs. racer pursuit, not for the faint hearted! You will also get the chance to enjoy an exclusive preview of the Need for Speed Hot Pursuit videogame from EA before it even hits the shelves and experience the adrenaline and intensity of a high-speed cop pursuit for yourself!          Check out the full story here…